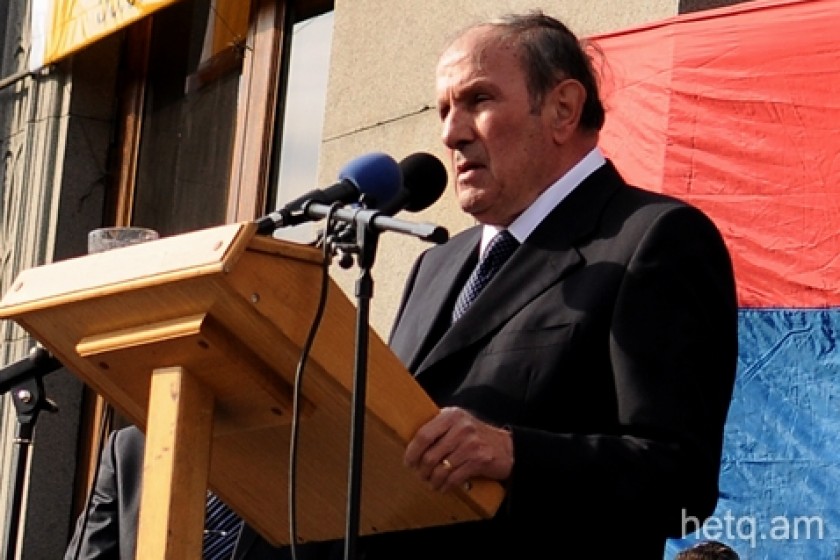 Ter-Petrosyan: Diaspora Should Draft Its Own Genocide Agenda; Recognition Not a Cornerstone of Armenia's Foreign Policy

Armenia’s first president Levon Ter-Petrosyan has issued his version of what Armenia’s official proclamation should be on the eve of the 100th anniversary of the 1915 Genocide.

Readers will recount that Ter-Petrosyan blasted the Pan-Armenian Proclamation drafted by Armenia’s State Commemorative Organizing Committee last month as faulty and not in the best interests of Armenia.

In his draft proclamation published today in the Chorrord Ishkhanutyun newspaper, Ter-Petrosyan states that while Armenia should work to the international recognition of the Armenian Genocide (a policy enshrined in Armenia’s August 23, 1990 Declaration of Independence), such recognition should not become a cornerstone of Armenia’s foreign policy.

Ter-Petrosyan argues that Armenia’s obligation to work towards international recognition must be regarded as a human rights issue solely, and thus, in the context of obligations stemming from international conventions.

The former president says that the Armenian government should not assume to instruct the Diaspora regarding its agenda because the worldwide Armenian community, as taxpayers and citizens, has the right to lobby and pressure their own governments to recognize and condemn the Genocide. Whether or not those governments accede to such demands is an internal political matter.

Ter-Petrosyan writes that the Armenian government should not demand that Turkey recognize the Genocide and come to grips with its history as this too is an internal matter for Ankara.

He adds that the above does not refer to the restoration of family/community property or to the compensation of Genocide survivor descendants for the material losses sustained by their forbearers.

Ter-Petrosyan also calls on European governments not to regard Turkey’s recognition of the Genocide as a prerequisite during ongoing negotiations for its membership in the European Union.  The former president argues that Armenia is very interested when it comes to the issue of Turkey’s integration in Europe for regional security reasons and in terms of creating alternatives for cooperating with the outside world.

In his draft proclamation, Ter-Petrosyan writes that “Armenia is ready to establish diplomatic relations with Turkey based on the Armenia-Turkey Protocols signed in Zurich on October 10, 2009 and to cooperate in the economic, cultural and political spheres.

The only reservation, as underlined by Ter-Petrosyan, is the appropriateness of a committee comprised of Armenian and Turkish historians to study the historical reality of the 1915 Armenian Genocide.

Ter-Petrosyan argues that there is not one international example where any political issue has been resolved by a committee of historians and that there is the fear that such a committee would descend into platform for emotional outbursts and intense debates; something that will complicate establishing mutual confidence between the two peoples rather than fostering it.

In conclusion, Ter-Petrosyan says that his draft proclamation is a personal initiative and in no way can be considered the final word on the matter, and that he is willing to hear comments and critiques from all interested parties.