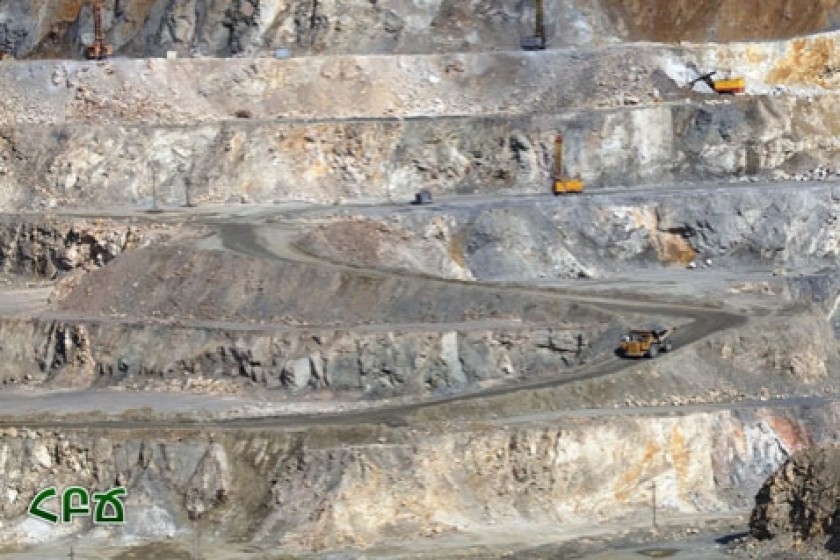 Time for Armenia to Choose: Mining for Development or Systematic Plunder?

It is indisputable that different aspects of the mountaintop mining industry, especially the production and processing of useful metal mining, cause irrevocable damage to nature and human health, thus differing essentially from other types of human economic activity.

However, the companies engaged in these activities have been insisting for a long time that so called "sustainable" mining operations cause almost no damage to the environment.

Now that such a statement is hard to substantiate they have begun using the term "responsible" mining and the main idea of this is to disguise the real hazards and neutralize public criticism under the veil of economic growth, corporate profit and social programs. And all this is even more dangerous for countries like Armenia that have a small territory, population living under extremelydifficult social conditions and corrupt government.

This is one of the main reasons for the continuous interest of different companies toward metal resources of Armenia, and continuously the discussions revolve around making the investments in this field more productive and attractive, and exploiting new metal mines and even outcroppings.

Once again we would like to remind the decision-makers at the governmental level in our country today that Armenia has a total area of 29.7 thousand square kilometers, where approximately 460 mines already have permission for exploitation, out of which 27 are metal mines, and additional 85 metal mines are currently in the study phase and waitingto be exploited. As a result, there are already abouteight hundred million tons of tailings in 23 open and closed tailing dumps, which are saturated with heavy metals and other dangerous substances.At this rate, after 2-3 decades there will be hundreds of toxic and extremely dangerous tailing dumps in Armenia, which could be disastrous for the country and its people.

To all those “wise men” and executives of mining companies, who compare Armenia to Canada, Australia, USA, Sweden or Russia in order to prove the necessity of the development of the mining industry in Armenia, instead of engaging in demagoguery we advise you to open the world map and see the difference between Armenia and these countries in terms of area, density of population and biodiversity. In addition, we advise you to thoroughly research the laws, regulations,  and taxation system of those countries, compare them to ours and only then speak about the necessity of exploiting new mines, make majestic announcements or try to appear as the saviors of the country (see the“Mediamax.am’s” interview with Howard Stevenson, President and CEO of Lydian International:“Success of Amulsar will eventually translate into the success of Armenia”).

Forest ecosystems, such as Teghout Forest, that were created over the centuries are being destroyed for short-term gain. Thousands of hectares of land are already irreversibly lost, they are buried under open mines, stripped and minimal ore bearing rocks, and the soil is already rich in heavy metals and other dangerous substances. The surface and ground waters are contaminated from the absorption of the tailing waste and drains released from the tailing dumps, which are later used for irrigation and other purposes. As a result,the heavy metals end up in the agricultural crops, hay and other products (e.g., meat, milk, honey, etc.) and eventually through the food chain end up in the human organism as well becoming the cause of various health conditions and diseases (see relevant scientific researches).

Of course, the conditions for exploiting Armenia’s metallic useful minerals are very attractive, as our so-called government has not only given 100% exploitation permission to foreign companies, mostly registered in offshore zones, to use the wealth that belongs to the people but have also created a legal and taxation system to make the mining companies feel at home. For the exploitation and production of the natural resources, granted by nature to us and the future generations, the taxation rates that have been set are no different than the taxation rates imposed in other areas of economy, when they should be much higher.

In Armenia, the mining companies are entirely exempt from paying fees for the tailings, waste dumps and minimal-ore bearing rocks. Even if these were taxed at the lowest rates, then each year a few 100 million euros will be collected in Armenia, which would make up a lot more money than all the current taxes and fees combined together paid by the mining companies annually.Also we have no special state fund set aside like in many other countries for accumulating very large sum of money from utilization of natural resources in order to compensate possible environmental damage and to protect the environment.

As a result, the largest amount of the mining income flows into offshore companies, as well as to local officials and various international financial organizations hidden behind the offshore companies. As a result of the direct force and efforts of these kinds of international organizations, Armenia has adopted laws and legal acts ensuring the plunder of our natural resources.

The announcements about creating job opportunities are also false and groundless. According to the National Statistical Service of the Republic of Armenia, in 2013 only 9,400 people worked in the fields of mining and open-mine operations, which makes up only 0.8% of the population employment in Armenia and accounts for only 4.5% of Armenia’s Gross Domestic Product (GDP). It’s worth mentioning that it is the largest 5-6 mining companies, operating for already quite a long time, that provide nearly 95% of the results mentioned above.

These are all undeniable facts which bring us to conclude and affirm the following: “NO NEW MINES IN ARMENIA”, until serious systematic and fundamental amendments are adopted and implemented, which are as follows:

1.   Work out a thorough strategic plan for the development of the mining sector based on scientifically grounded and real assessment of long-term ecological damage and expected income from various projects.

2.   A serious reconsideration of the legislations in the mining and environment sectors; a considerable increase in the payments and fees paid by the companies.

3.   Classification of tailing dumps according to  their risk level and impose taxes for toxic wastes. Implementation of the “Polluter Pays Principle (PPP).” It holds that those who cause contamination should be responsible for paying the clean-up costs. Moreover, the fees should be equivalent to the damage caused to different parts of the environment.

4.   Implementation of water recycling systems in all mining factories and tailing dumps, which will prevent the waste outflow into the environment. Until it is implemented, ensure that the outflow points are under serious control and periodically take samples and conduct necessary research.

5.   Conduct safety studies in all open and closed tailing dumps, especiallyto estimate the stability of dams in case of emergencies, such as earthquakes, landslides, shear, floods, etc.

7. Economic assessment and extraction of the range of useful elements already available in the tailings instead of exploiting new mines. Experts estimate that it would be more cost-effective and much less harmful than exploitation of Teghout or Amulsar mines.

8. Increase in efficiency of current operating mines, particularly extraction of basic metals from ore reaching 90-95% instead of the current 65-70%. In addition, conduct extraction of the useful and quite valuable elements nearby.

9. Creation of an environmental fund, where the extractors will pay serious fees for environmental and public health protection,rehabilitation of polluted areas, elimination of consequences caused by potential accidents, as well as realization of independent and objective scientificresearch.

Of course, we can also submit many other proposals in addition to the 9 proposals above. However,these proposals can become a reality only when we have professional leaders who really care about the future of Armenia, who are willing and able to make the right decisions, who will finally realize that the metal mineral resources will one day be exhausted, and it is necessary to utilize the money gained from the operation of mines for Armenia’s real empowerment and development of other sectors of the economy, rather than the enrichment of offshore registered companies and a few families.

We urge the citizens of Armenia and our compatriots living abroad not to be indifferent towards this destructive process and realize that the time has come for all of us to make a decision - either side with the exploitation of the mines for the sake of our country’s “development” or systematic plunder of the natural resources belonging to us and the future generations.

The result depends on the position and action of every one of us.

P. S. We would like to bring everyone’s attention to the following two documentaries, which illustrate who is exploiting Armenia’s natural resources, how they are being exploited, what environmental and health problems are caused by the exploitation of the mines and finally, what are the Armenian people getting from all of this.