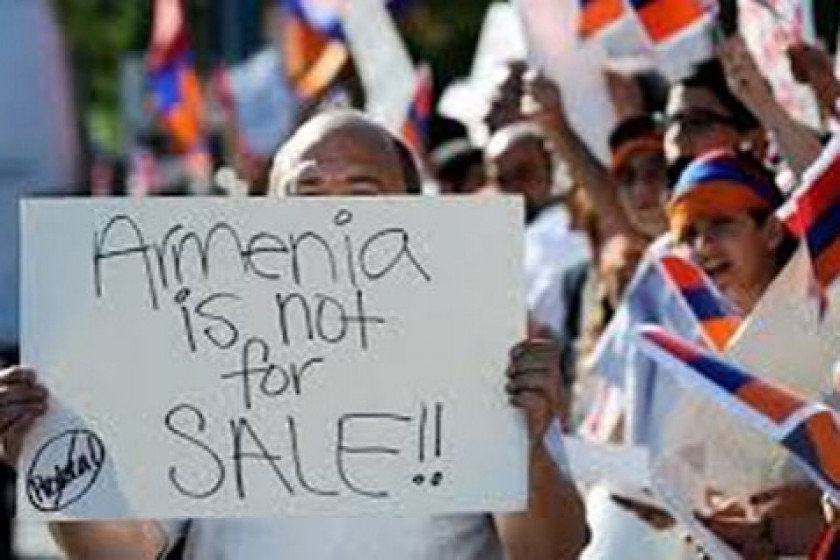 Armenia: What Could Democracy Be?

Part I:  There Is No Such Thing as Democracy Plain and Simple

Some older readers may recall a statement by one of the self-described “Velvet Revolutionaries” in Eastern Europe a quarter of a century ago, to the effect that there is no such thing as proletarian democracy or bourgeois democracy; rather, he said, there is just DEMOCRACY, plain and simple.

Unfortunately, my internet searches have not succeeded in locating the exact quote, but it went like that.

Back then one heard many such statements.  By 1990, Yerevantsi’s were fed up with high-handed bosses who called themselves communists and claimed to rule in the name of some higher form of democracy.  They were fed up with one-party rule, and they wanted responsive, representative leaders.

Democracy—and, of course, Free Markets--were catchwords inscribed on the hearts of protest leaders in Yerevan.  At the same time, the protest leaders insisted that the people of Soviet Armenia should not participate in the Union-wide March 17, 1991 referendum on whether to keep their confederation and reform it.  Armenia abstained from the referendum, but voting took place in nine of the fifteen Soviet republics, and by the end of the process 76% of voters in those republics—an absolute majority of eligible voters in the Soviet Union--opted to retain and reform the union.

As we know, the August 18 coup, followed by Boris Yeltsin’s counter-coup, scuttled the democratic decision. When Yeltsin dismantled the Soviet Union in defiance of the expressed democratic will of the referendum, he did so in the name of democracy.

Democracy-talk served as a powerful ideological bulldozer to destroy the last remnants of socialism in Eastern Europe and the Soviet Union.  But in the years since then, surveys and studies have described a U-turn in public opinion.  As a Pew Global Attitudes report released in December 2011 stated, “Enthusiasm for democracy and capitalism has waned considerably over the past 20 years, and most believe the changes that have taken place since 1991 have had a negative impact on public morality, law and order, and standards of living.”

In case after case, as we know, the inflated hopes have shriveled, and the former Captive Nations have ended up with capitalist bosses even more imperious than their Soviet predecessors--and far less constructive. Two Czech writers recently described the aftermath of their “Velvet Revolution” in terms that Armenians will recognize:

After 25 years, Czech society finds itself in crisis, yet the rest of the world seems not to know about it. Few listen to the concerns of ordinary people. In 1989, most of them believed that victory belonged to all. However, the narrative of the Velvet Revolution serves today to maintain the truth of a very narrow class of people who have made a new cult. The elites claim that there has never been a better time than now and never will be. It makes sense for them to say so. But we do not believe it.

(Lukas Rychetshy and Jaroslav Fiala, “Czech’s Look Back on 1989, a Revolution Betrayed,” originally published in A2 Cultural Bi-Weekly, November 17, 2014.)

If citizens of the Czech Republic or the Republic of Armenia have lost enthusiasm for democracy, this is because their thought-trainers in the West have succeeded in neatly identifying democracy with capitalism. If you succeed in convincing recently impoverished Armenians that there is just democracy plain and simple, and that it must come with capitalism, then a large number of them will conclude that it is not something worth wishing for.

The resulting demoralization works to the benefit of the rulers, since it leads those whom they rule to dial back their expectations about democracy “plain and simple.”  Demoralized people are easier to rule.

But what if another sort of democracy were possible?

The word democracy is certainly more ambiguous than the Velvet Revolutionaries and their admirers in Yerevan had assumed.  It does not come pre-packaged with its own definite meaning, and it does not name one and only one political setup.

Consider, for example, the common conception of democracy as majority rule.  We know that this definition does not stand up to the record:  where, across the panorama of democratic regimes today does the majority rule?  Actually, it is fortunate for minorities that majority rule has been so rare.

In Azerbaijan and Armenia twenty-five years ago, self-described democratic movements had no problem evicting Armenian and Azeri minorities from their homes in these respective countries. These examples illustrate the familiar view that democracy, conceived ONLY as rule by the majority, opens the door to the abuse of minorities, whether national, ethnic, or otherwise.

The Oxford English Dictionary defines democracy as “a system of government in which all the people of a state or polity […] have the right to take part or vote.”  When we consider the cases of, say, ancient Athens, the American South, and the apartheid Republic of South Africa, we encounter the technical but crucial question:  what constitutes a “person”? Native birth, skin color, and ownership of property have loomed large when it comes to citizenship and the franchise. Gender, too:  the United States of America, that self-designated global custodian of democracy, had been in existence for 144 years before the ratification of the 19th Amendment to its constitution, extending voting rights to women.  By contrast, Article 22 of the first Soviet Constitution had established the right of women to vote two years earlier, right after the October Revolution.

If democracy is the rule of the many, then what are we to make of the constitutional “checks and balances” in the most powerful states today?  The framers of the U.S. Constitution, a document that was widely admired as a prototype of other constitutions, were profoundly opposed to majority rule, to the detriment of “the minority of the opulent,” as James Madison, “the father of the American constitution,” put it.  To this day, democracy in the United States of America is not EVEN the rule of the majority.

American-style democracy has lost much of its glitter these days.  Judging from the proposals to reform Armenia’s constitution along parliamentary lines, our compatriots today are more likely to look to Europe for their democratic models than to the United States.

The Appeal of Western Democracy

What Armenians admire most about liberal democracies in the West are such things as their alleged emphases on limited government, “rule of law,” civil liberties, individual rights, due process, and accountability, as well as their smoothly functioning judiciaries, the right of appeal, and so on. But let us not forget that, with few exceptions, these features of the most admired political systems and political cultures in the West have, with few exceptions, been wrenched by force from resistant capitalist rulers, thanks to pressure from below:  the abolition of child labor, the right of workers to bargain collectively, the eight-hour work day, universal suffrage, consumer safety legislation, civil rights gains, safeguards for individual liberties, social security, and one thousand other achievements—none of these were the concessions of soft-hearted rulers; rather, they were the results of stubborn popular resistance to those rulers.

In country after country, thousands of people lost their lives in these struggles.  When this resistance has been sustained, it has typically developed in the direction of greater self-organization by workers, farmers, former slaves, women, and civil rights advocates.  But as soon as the pressure from below has ebbed, the achievements have disappeared, one after the other.

We have seen that there is no such thing as democracy plain and simple.  But who defines democracy?  It seems that this, too, is a stake of political struggle, of class struggle. We have witnessed what happens when organized resistance recedes in countries like the United States of America, as wages have slipped, the super-rich have become enormously richer, personal freedoms have eroded, and state agencies have subverted democratic rights and the last vestiges of privacy.  And we have seen what has happened in countries like Armenia when workers are stripped of every last remnant of institutional power.  No number of constitutional provisions or checks and balances can safeguard the achievements of liberal democracy without organized vigilance from below.

Here, at long last, we have a lesson that regular folks in Armenia can profitably learn from the West:  if one day Armenia is to obtain the kind of democracy that will redound to the benefit of most of its citizens, then the least advantaged of them will have to come together, organize themselves independently, and fight for the democratic and civil rights they claim.  And after that, they will have to fight to defend and extend those rights.

There are reasons to believe that if we reach far enough, this goal is not beyond our grasp.  For one thing, the numbers are there:  In Armenia, households headed by wage earners, the unemployed, the underemployed, the self-employed, small farmers, and people on fixed income make up a large majority demographic.  If small business owners join this alliance, then we have a potential constituency for a very broadly based democracy.

The big capitalists that have been ruling Armenia for the past twenty-five years have diminished the population, dispossessed and impoverished the majority, debased the security and status of women, depleted large swaths of the forests and water, and otherwise despoiled the country.

Unfortunately, this ruling class is not likely to give up state power unless it is forced to do so.  To challenge it will require organizing along working-class lines.  To this end, Armenia needs militant unions and a party of labor that is willing and able to defend the rights of minorities while fighting for a democracy of the working class majority.

Markar Melkonian is a philosophy instructor and an author.  His books include Richard Rorty’s Politics:  Liberalism at the End of the American Century (1999), Marxism: A Post-Cold War Primer (Westview Press, 1996), and My Brother’s Road (2005).

GB 2019-01-25 08:30:00
Democracy means that you should never bribe an oligarch, who will turn around and do favour back to you....you both are corrupted and you both should be prosecuted in the name of democracy!