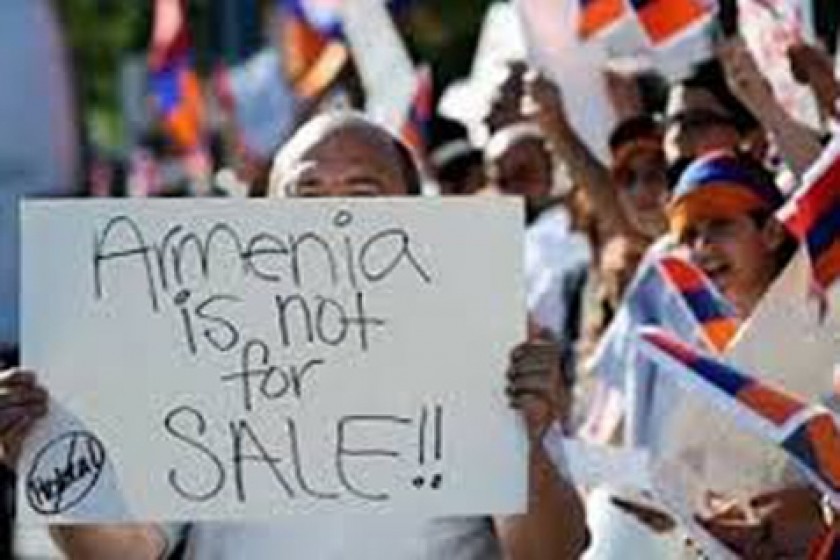 What Could Democracy Be?

Part II of III:  Democracy and the Dangers of Demoralization (Part I)

Adults in Yerevan these days seem to have doubts about the word democracy. In view of the record, this is not surprising.  But the doubt comes with its own dangers, including the danger of masking a very different sort of democracy from the sort that exists in Armenia.

The doubt has been a while coming, and it was born in part by confusion.  A focus-group survey conducted fifteen years ago by a Washington-based foundation concluded that, “Democracy is a hard concept to understand in Armenia today. It means many things to many different people.” (Thomas Carson and Gevork Pogosian, “Public Attitudes toward Political Life,” International Foundation for Election Systems, August, 2000, p. 21)

Participants in the survey described democracy variously as “conducting free elections,” “protection of rights and freedoms” of citizens, and even state provision of “equal financial conditions for everyone.”  No wonder, then, that it has been so hard to understand what Armenians have meant by “democracy.”

According to the survey report, a majority of the target population had by then come to associate democracy with “bad economic conditions, unemployment, and lower standards of living.”  After noting low voter turnout, the authors wrote that, “The main reason many do not participate in elections is the belief that their vote does not count.”   “As proof of this claim,” they wrote, “participants pointed to the unexpected (and popularly rejected) results of the 1996 and 1998 Presidential elections” in Armenia.  (Carson and Pogosian, p. 3)

The career of the first President of the Third Republic of Armenia shadowed that of Russia’s first post-Soviet President, Boris Yeltsin, and both account for the waning fortunes of democracy-talk in Armenia. After the grotesque 1996 presidential election in Russia and the contested reelection that same year of Levon Ter-Petrosyan, democracy-talk lost its “wow-power”, just as the 1998 devaluation of the Ruble flopped a wet blanket on the Free Market fever. And so it was that the counterrevolutionary figureheads who captured power in Moscow and Yerevan in 1991 relinquished their respective offices in 1998, without much in the way of public regret.

By that time, though, the damage had been done.  David Satter, a senior fellow at the Washington-based Hudson Institute, writing in the conservative Wall Street Journal, described the consequences of the victory of Democracy in Russia:

Between 1992 and 1994, the rise in the death rate in Russia was so dramatic that Western demographers did not believe the figures. The toll from murder, suicide, heart attacks and accidents gave Russia the death rate of a country at war; Western and Russian demographers now agree that between 1992 and 2000, the number of “surplus deaths” in Russia–deaths that cannot be explained on the basis of previous trends–was between five and six million persons.

Within roughly the same range of years the average life expectancy of a Russian male fell from 65 to 57.5 years.  Even the likes of the anti-Soviet journalist Paul Klebnikov described Yeltsin’s legacy as “one of the most corrupt regimes in history.”No wonder, then, that by the time Yeltsin left office, he had an approval rating of 2%.  (CNN, 2002)   But by that time it didn’t matter:  “democracy” had stolen the election from the Communist candidate in Russia, reinstated a pliant client in Yerevan, and advanced the interests of Berlin and Washington.

Since then, contested elections have continued apace in Yerevan as in Moscow, and more recent surveys have indicated that the disillusionment has only deepened. Instead of the promised Free Market prosperity, privatization plunged most inhabitants into abject poverty; unemployment soared, and Armenia slid into years of recession, from which the country had not yet emerged before it felt the effects of Western sanctions against Russia and falling oil prices.  Between rigged elections and economic ruination, the street-level euphoria about Democracy and Free Markets went the way of Vano Siradeghian.

Democracy as a Cloak for Class Rule

One of the most salient functions of democratic institutions these days—electoral arrangements, legislatures, constitutional set-ups, and so-forth—is their powerful role in legitimizing plutocracy.  Democratic institutions function to legitimize the rule of capitalists as a class the way divine right used to justify the king’s absolute authority in the Middle Ages.

Indeed, as the eminent Canadian political thinker C.B. Macpherson noted in his book, The Life and Times of Liberal Democracy, “The concept of a liberal democracy became possible only when theorists—first a few and then most liberal theorists—found reasons for believing that ‘one man, one vote’ would not be dangerous to property, or to the continuance of class-divided societies.”  Over the course of the last two centuries, democracy itself has been defined and redefined in keeping with the practices that have proven effective in this legitimating function.  Where “rule by the many” has not been conducive to capitalist class rule—such as workplace democracy--it has been rejected.  In such supposedly exemplary democracies as the United States of America, for example, democracy goes hand in hand with the power of Corporate America over “the people.”

Democracy, then, legitimizes established political rule.  In this sense representative electoral political systems are “merely formal”:  real power is never at stake in elections, and as we have seen time and again—from Iran to Guatemala and from Chile to Egypt—the poor can never capture political power through the ballot box alone.

The widespread recognition of this fact accounts for democracy’s diminished prestige in places like Russia and Armenia today. Among the opposition leaders in Yerevan there are ambitious men, would-be saviors, who offer nothing more than a return to the disastrous policies of the first post-Soviet administration.  Despite their best efforts and their personal fortunes, these personalities have failed to capture the imagination of the public.  When the “democratic” opposition fails to gain support against an unpopular administration, the disillusionment is complete.

The Danger of Disillusionment

But disillusionment with “democracy” poses its own dangers. When the prescribed version of democracy fails to perform its legitimating function, ruling classes, or factions of them, have time and again adopted anti-democratic methods of control, by state institutions as well as non-state ones. Europeans witnessed this process eighty years ago in Germany, Italy and then again twenty-five years ago in places like Croatia, Kosovo, and a dozen locales in the former Warsaw Pact countries.

More recently, in Georgia, Central Asia, Ukraine, and half a dozen other former Soviet locales, anti-democratic regimes have stepped in to save the day for capitalist rule, in the face of widespread dissatisfaction with democratic capitalist regimes.  In times of rising anger, it is child’s play for capitalist rulers to blame their own democratic institutions for the problems that their economic system created. When widespread disaffection with democracy sweeps a country, the first horse out of the gate is fascism.  And job number one for fascism is to terrorize workers—the very social force that holds out the best long-term hope for countries like Armenia.

Deepening economic crises and mounting social conflict could lead to greater and greater repression in Armenia, too.  Until Armenia has a mass-based democratic opposition that has built a sustainable institutional presence on the ground and that presents a realistic way forward, the country could face the damaging political upheaval and the pointless radicalism that has been so disastrous in Georgia, Ukraine, and elsewhere.

The debacle in the name of democracy in the former Soviet Union could not have taught a clearer lesson if it had been scripted by a Disney screenwriter:  elections in Russia and Armenia show that democracy, at least the version operating in Russia and Armenia these days, functions to legitimate the rule of oligarchs and their foreign benefactors over everyone else.  So far, elections have served as little more than a scrim hiding the dictatorship of capitalists as a class and legitimizing its monopoly of power.  If people have been convinced that democracy consists of little more than casting futile votes in fixed elections, then the stage is set for demagogues of the strongman variety to step in to save capitalist rule.

But democracy--at least some form of it--can do more than just legitimize plutocracy.  In the next installment of this series, we will consider a couple other functions of democracy, conceived more broadly and taken more seriously.

Markar Melkonian is a university instructor and an author.  His books include Richard Rorty’s Politics:  Liberalism at the End of the American Century (1999), Marxism: A Post-Cold War Primer (1996), and My Brother’s Road (2005).

Dave 2015-05-07 15:00:45
Without sufficient economic growth, and the freedom to open businesses, and not be thwarted by oligarchs, democracy means little. People will tend to just feed off what little scraps their are, which will get them nowhere, and situation will get even worse.