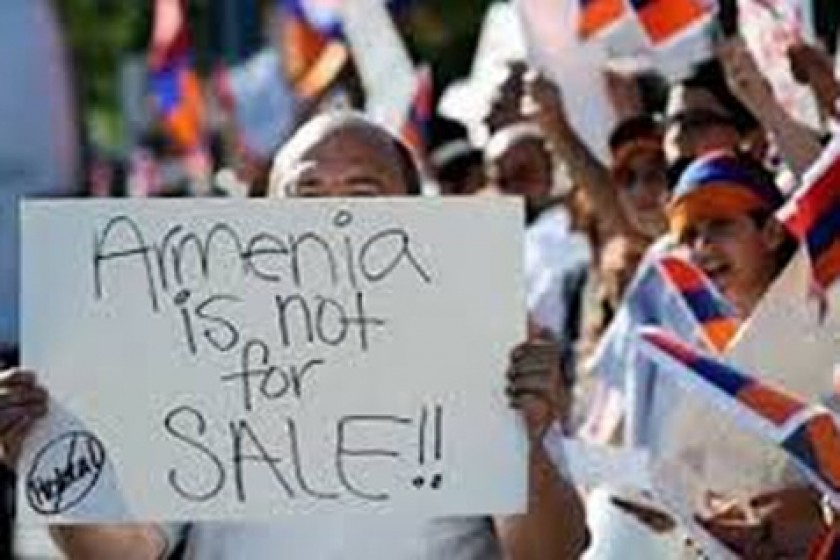 What Could Democracy Be?

Democracy, or rather liberal democracy, advertises itself as a system of government in which individual rights prevail, but more accuratelyit is the name given to various political systems in which the “consent of the governed” legitimizes the political monopoly of capitalists as a class.  As it turns out, though, there is an alternative model of democracy for a system that could actually benefit the majority population of the country.  To see what this alternative model could bring, we should first take a closer look at the limited sort of democracy that prevails in places like Armenia today.

The Market Model of Democracy

Western agencies prescribe a certain model of democracy for vulnerable countries like Armenia, namely, “the market model of democracy.”  According to this model, democratic participation is an act of separate individuals, each with his or her own pre-given preferences.  It is the job of a democratic systemmerely toregister these individual preferences and pile them together, to determine policy, legislation, and candidate choice.

That is the official story.  In actuality, this version of democracy has a lot to do with WHAT KINDS of preferences it registers; but that is another discussion for another time.  The point to stress here is that for most of the population, the decisive political act is voting, which is little more than choosing this or thatpre-selected candidate.

Like shopping,then, democracyis supposed to be another way for individuals to pursue theirprivateinterests. American-funded economics textbooksexplicitly connect democracy to shopping, though in a typically backwards and one-sided manner:  consumer choice, they say, is “economic democracy,” and shopping amounts to casting votes for and against goods and services. My decision to vote for candidate A over candidate B is all about which of them is likely to serve my private needs and the private needs of my most immediate family.  Customers are voters, and voters are customers; candidates are would-be service providers, and electoral campaigns are advertising campaigns.

Liberal democracy characteristically appeals to self-interest narrowly conceived, rather than a collective good.  In this view, the goal of democratic politics is the optimal compromise among private interests. Back-and-forth haggling in the market of democracy produces diminished expectations, cynicism, and the priceless lesson that the rich will always be in power. The resulting low voter turnout and limited participation--an effect of the system--further strengthens that very system by constricting the range of choices and destroying hope for real change.  Thus, the market model of democracy reduces participation of a large part of the electorate, usually without compromising its legitimacy.

And yet in Armenia as elsewhere, candidates and politicians still know that they can advance their interests by conjuring “the will of the people,” “national interests,” and various flavors of nationalism.  Collective ideals die hard, even in a country where the electorate is exhausted and disillusioned.

The market model of democracy could only prevail in Armenia by doing violence to deeply held traditional assumptions and motifs that emphasize the broader welfare of the neighborhood, the town or village, and “the people.”  Our older compatriots, women and men who lived longest within the Soviet order, could tell us this, if we would for a moment listen to what they have to say instead of constantly denigrating their lives and ideals.

Armenians are understandably angry about bribery, ballotstuffing, back-room deals, fraud, and other “irregularities” of the election process in their country.  It is surprising that the most brazen of these “irregularities” have persisted for so many years.  Perhaps Armenia’s plutocrats have made the mistake of assuming that the coming generation will remain as docile in the face of theirdepravities as thecounterrevolutionary generation has been.  In any case, patronage,back-room haggling, and the manipulation of the electorateare natural expressions of a liberal democratic political culture in which public institutions are, at best, just service providers for customer-voters.

“Political scientists” in the West have long acknowledged this.  In his book Capitalism, Socialism, and Democracy (first published in 1942), for example, the Austrian economist Joseph Schumpeter argued that the electorate is inveterately ignorant and easily manipulated by politicians, who set the agenda. Instead of the “rule of the people,” Schumpeter argued that democracy is—and should be--a mechanism whereby leaders compete for influence the way private companies compete for business.  Although periodic elections legitimize governments and keep them accountable, the participatory role of individuals is severely limited, and the policy program is—and should be--very much in the hands of an elite leadership.Schumpeter’s views are influential among academics in the West, but for obvious reasons Western propagandists do not showcase these views.  They have convinced us to accept what they themselves do not really believe, namely, that liberal democracy is all about popular sovereignty, and that elite leadership was the sole province of non liberal-democratic states, such as the old Soviet Union.

In the absence of a robust conception of the greater good, what remains of public office aside from payment for services rendered?  If the pursuit of private interests is job number one in politics as in daily life, thenit is not surprising that politicians, bureaucrats, and even traffic cops should view their “customers” as a source of income.This cautionary observation applies to the liberal opposition groups in Yerevan today just as much as it does to the current government that they denounce.

Indignation is growing, though, and it is likely that in the coming years the most blatant of the“irregularities”will disappear, as it becomes clear that continued abuses threaten to undermine the political legitimacy of the regime.  But even at that, the country’s electoral politics and official political culture will remain every bit as limited, one-sided, and rigged in favor of the candidates of the plutocracy.

If the market model of democracy is the only game in town, then aside from the “irregularities,” Armenia today already has a rather pure form of liberal democracy.  And even when it comes to corruption, it is not clear that it is worse in Yerevan today than it was in, say, theUnited States of America (that self-imagined paragon of liberal democratic rectitude)during the Gilded Age.  The pro-Western liberal democratic opposition in Yerevan really does not have much to complain about--or at least they do not have solutions for the problems that they identify, because they do not provide a genuine alternative.

Democracy and the Common Good

As it turns out, there is an alternativeconception of democracy, one in which democratic institutions open up a public space for discussion ofcollective interests, instead of exclusively private interests.  Within this public space, or forum, open discussion and debate transform personal preferences, creating new conceptions of the greater good.

Open debate discourages the public expression of blatantly self-serving preferences.In open debate, if a party with narrowly self-serving aims does not castits proposals in terms of public good,then it risks losing the debate.  Itsself-serving arguments will come up against counterarguments, whether self-serving or not. Before a mining company can buy votes for politicianswho will look the other way when it dumps waste water into a river, the corporation’s mouthpieces will have to come to the forum with arguments, strong or weak, to the effect that their preferred candidate will pursue the greater good.  They will have to change the minds of voters, by making the casethat their “market solution” actually will redound to the benefit of more people.  Environmentalists, local residents, and farmerswill come to the forum with a different perspective, presenting their own arguments to make the opposing case.

This alternative model sometimes goes by the name of deliberative democracy.  This model of democracydoes not require the participation of every citizen in politics.  People are different, and many people simply do not wish to engage in the political process.  (In this respect, political deliberation differs from the market, which requires the participation of pretty much everyone.)  Nevertheless, it is likely to bring many more into the political process than currently bother with it under the existing regime.

There are reasons to believe that, in capitalist Armenia today, a new political culture is taking form, outside of the framework of official political institutions.  To a limited extent, as we know, deliberative democracyalready exists in Armenia, thanks in large part to the work of investigative journalists, community and environmental groups,and consumer advocacy groups, applying external pressure on the political system. Public deliberation and ground-level activism have scored victories, at least marginally, against the ruling class.  The victories and near-victories include the closure of polluting mines and rapacious logging operations, the removal of corrupt magistrates, the prosecution of cronies, successful protests here and there against evictions and the privatization of public land; strikes for payment of back wages, and campaigns against domestic violence, bus fair increases, and repression of political dissidents.  Even within the context of capitalist political systems, public debate and the activism that comes with it have forced the windows open and pointed beyond prevailing relations of domination.

We should keep in mind, though, that what has made these victories possible was action OUTSIDE of the rigged political system.  The lesson is that if anyone but the plutocrats and their foreign benefactors are to make themselves heard, then they must apply pressure from below.  The political system itself, whether it calls itself democratic or anything else, is an obstacle to the power of the working-class majority of Armenia.

Deliberative democracy alone, then, is not a cure-all. The decisive difference between a well-functioning deliberative democracy and the market model of democracy could and should lie in the character of state institutions themselves:  are they committed at the outset to the political power of the working class majority, rather than a handful of plutocrats?

But a well-functioning deliberative democracy at the level of state institutions will not simply arrive on the scene of their own accord.  There is no way around considerations of the class character of the state:  if the state is a capitalist state, then every conflict between a corporation and the greater good will be rigged against the greater good.

Expanded deliberative democracy could also play a pivotal role within a future context of workers’ power.  Here, unfortunately, the historical record provides tragic lessons as to what NOT to do.  Soviet leaders, starting with Stalin, failed to make the connection between democracy and accountability, and this had disastrous effects:  in the absence of democratic oversight, inefficient, brutal, and ultimately self-defeating policies proliferated.  Open debate is the closest thing there is to a safeguard against inefficient and dysfunctional legislation, leadership, and state policies—or at least against the indefinite continuation of them.  It would be hard to overstate the importance of this point.

The Republic of Armenia is a state in which big capitalists as a class hold a monopoly on political power. The prevailing market model of democracy is part of a closed and privatized political culture that legitimizes an economic and political order that has dealt one blow after another to the majority of households in Armenia.  An alternative model, deliberative democracy, could help set the stage for the emergence of a new unofficial political culture.  In fact, there is evidence that this is what is taking place in Armenia today, as a younger generation is repudiating—in practice, of not explicitly—the political, economic, and philosophical assumptions of the counterrevolutionary generation of 1991.  But until and unless thestate itself is changed fundamentally, it is folly to expect state policies and status-quo politicians of their own accord to pursue a greater good that will actually benefit the majority population of the country.

Markar Melkonian is a philosophy instructor and an author.  His books include Richard Rorty’s Politics:  Liberalism at the End of the American Century (1999), Marxism: A Post-Cold War Primer (Westview Press, 1996), and My Brother’s Road (2005).