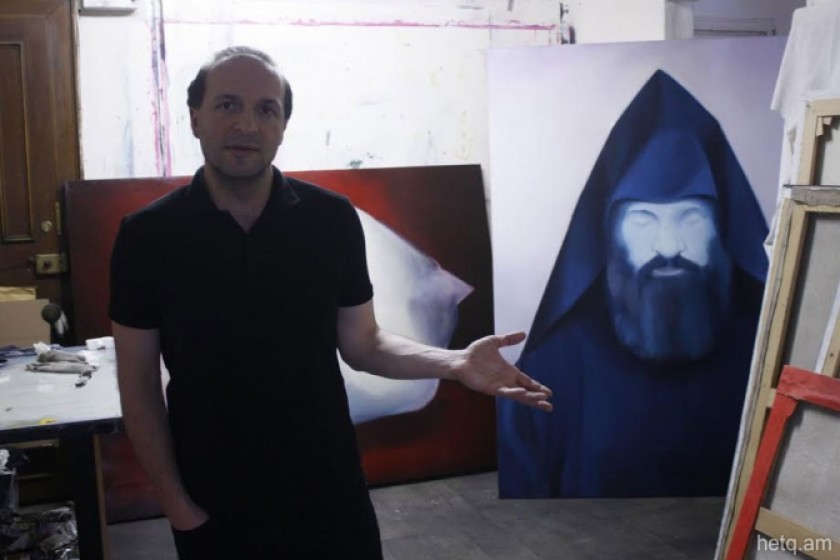 “Affliction of the Patriarch”: Aret Gıcır Explores Existentialist Dilemmas of Armenians in Turkey

Istanbul-Armenian artist Aret Gıcır has completed his twenty canvas Affliction of the Patriarch project that will be exhibited this fall at the Biennale in Istanbul.

The 36 year-old artist started the project six years ago when, after returning from Armenia, he found out that Constantinople Armenian Patriarch Mesrob Mutafyan II was suffering from Alzheimer’s.

“The Patriarch’s physical frailty underscores the symbolic end of a century of deterioration, during which the patriarchate had its significance stripped as a social institution and was wrested from the historical heritage and people that it represented, says Aret. “In the series of paintings the patriarch, who is neither dead nor alive, has become the poignant symbol of the deepest existentialist dilemmas of the Armenians remaining in Turkey and, in general, of the reality of the post-Ottoman era.

Aret studied art in Yerevan from 2002-2008. He didn’t plan to in the beginning. He had simply traveled to Yerevan to visit his Istanbul-Armenian friends who were studying various professions. After learning about the Yerevan Art Academy, he applied and was accepted.

“I figured to stay a few months but I wound up staying six years,” says Aret.

He says the greatest piece of wisdom he learnt while in Armenia was how not to paint. 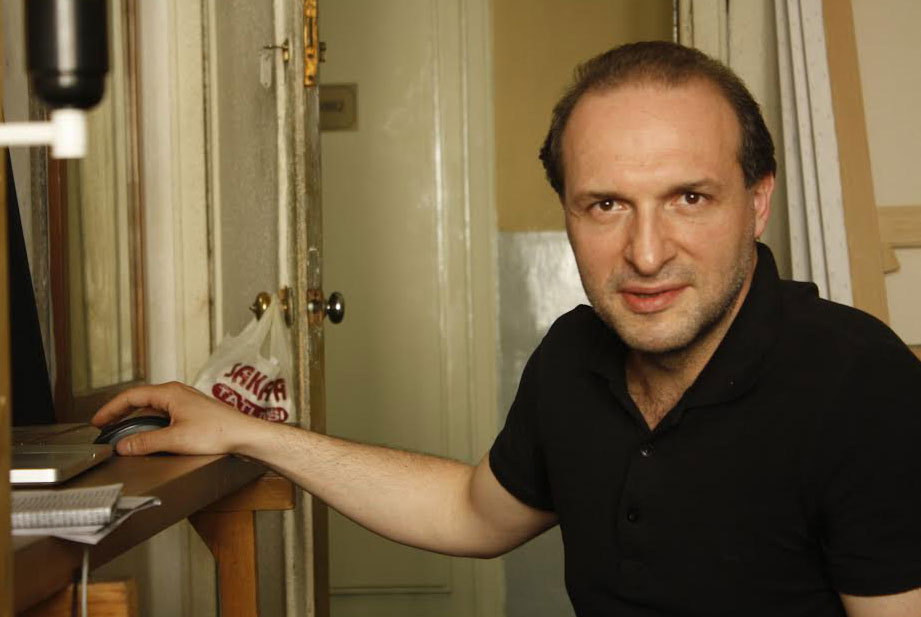 “The academy in Armenia is very conservative and closed. In Istanbul, it’s more open and closer to Europe,” he says. “There were some good artists with good technique, but it can’t compare, naturally, with academies in Europe.”

The artist stresses that academies are conservative institutions by nature, and while there is no education without them, there is an unhealthy tendency in artist circles that supports the notion that having an academy education is a good thing; both important and necessary.

“In music, however, there is no such thing. What is rock other than music that breaks the rules and academic foundations of classical music,” observes Aret.

He points out that there were similar movements in painting back in the day; for example, Van Gogh never had formal academy training.

“Today, of course, everything is mixed up. Different disciplines cross one another and this is a good thing. Those borders in contemporary art are being broken. But in Armenia, everything is still done in the traditional way,” Aret says.

The artist argues that Armenia is a closed place to live and work, given that it’s cut off from the world.

“One must also take into account the Soviet legacy. It would be different if Armenia bordered directly on Europe. This is probably why Armenia is cut off from the wider world. I’ve done paintings of the city and people in which sadness is expressed. This is my opinion. It’s easier for an outsider to talk about this. Armenia has its own set of problems.”

After returning to Istanbul, Aret began to focus on political themes that while connected to Armenians mostly expressed Turkish reality. The artist makes a point to say that he lives in a world in which Armenians also reside and that he’s not obligated to only work on Armenian related themes.

“If you live in Turkey, like it or not, those themes follow you. You have to do them to get free of them. But at the same time one cannot say that they are Armenian because they actually deal with Turkey. That’s to say they are in Armenian culture but that culture is in Turkey. Consequently, they are Turkish,” Aret says.

Aret gets upset when he’s described as an Armenian artist that creates works related to Armenian themes. He counters that such things aren’t said about German, Turkish or Italian artists.

“I don't call myself an Armenian artist.  This is a designation that is attributed to me. What I depict is not only the story of Armenians but the story of all inhabitants of Anatolia. Also, it is interesting why some artists will not get asked about being Turkish or British, for example. A German or a French artist, also draws on their cultural and historical legacy, however, they rarely have to confront questions regarding their ethnic identity.”

Aret brings the example of blacks in America. “Is a piece of art about them solely about blacks or America, as a whole? My objective, by referring to historical themes, is to make art and to present historical themes via art.”

Aret says it is inevitable that each artist will be inspired by their own personal history and identity, as well as by universal masters and themes, and will move back and forth between different cultural and artistic traditions

“But for some reason, this only seems to become a concern for those artists with particular ethnic identities -as if being situated in and inspired by a particular heritage is something out of the ordinary. And so, of course, topics and themes that have impacted my work so far do harbor Armenian culture and history within them.”

One such theme, of Armenian women in struggle, was at the core of Aret’s 18 canvas project called “Between Fire and the Sword” exhibited at Istanbul’s Öktem&Aykut gallery in the spring.  Aret says the project was a way to voice his opposition to the mainstream narrative that the Armenian Genocide was only about victims. The artist also believes it was about struggle and resistance. And Aret broke another taboo at the “Between Fire and the Sword” exhibit by showing Armenian women in struggle, as opposed to men.

The artist argues that male warriors are lionized and adorned, that statues are built in their honor, and this series of his goes against this idea.

“I didn’t want these women to be turned into heroes because they didn’t fight to become heroes. They fought for their children and to live,” Aret says.

The artist depicted the women removed from their environment; that’s to say Anatolia.

“The reason for removing them from their geographical locale was to show them as women, and not eastern women. It was done so that someone viewing the art in Europe would not think that these are oriental women, but just women whose history and content derive from the Genocide,” Aret explains. 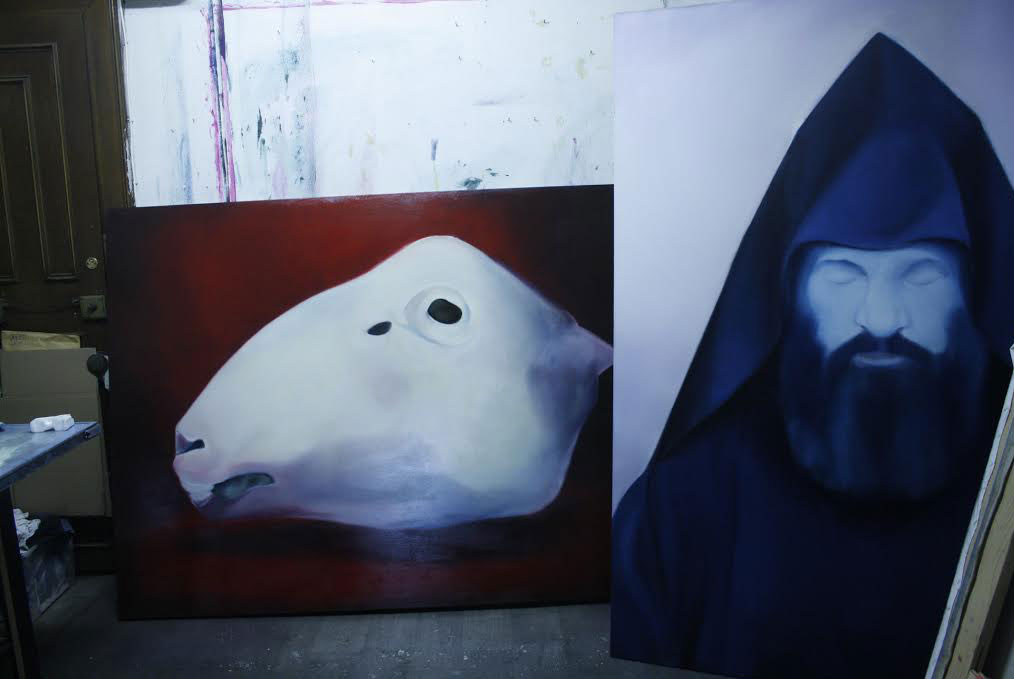 In the “Affliction of the Patriarch” series, Aret Gıcır depicts the present state of Armenians and Turks. The Armenians have lost their culture and the Turks, their memory.

The head of a sheep, depicted in one of the paintings, has a connection to the concept of victimhood. It’s not easy being the Armenian Patriarch in Turkey. One must be close, and removed, from the state at the same time.

“One cannot take Turkey, or for that matter, the Ottoman Empire, at face value. Nothing is clear. If you get close, they will grab your hand and then want your arm. You’ll wind up giving you whole body. And if you move away, other problems might arise,” says Aret.

(Aret Gıcır has had seven exhibitions in Turkey and one in New York. Two have been individual exhibitions)