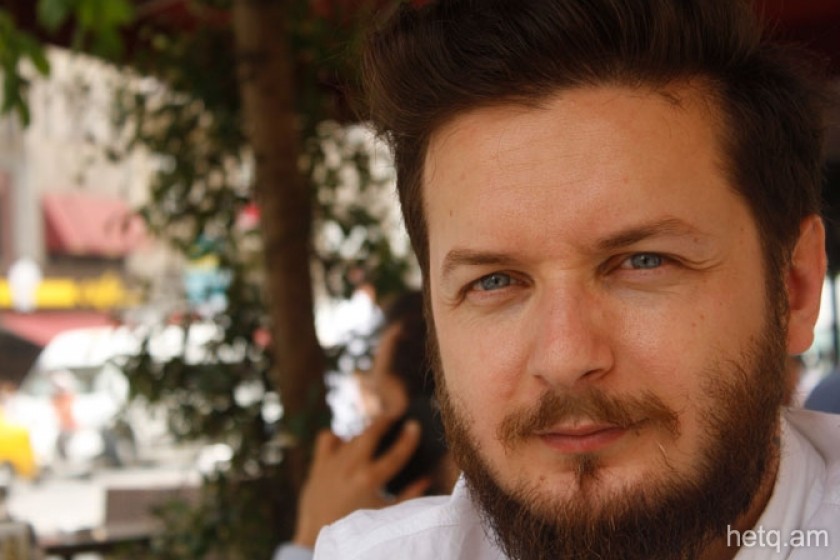 Questioning the Family Narrative: Turkish Photographer Asks ‘Did we really flee from Armenians’?

Emin Akpinar, a 32 year-old Istanbul based freelance photographer, is a man on a mission to fill in certain questionable aspects of his family’s history.

While born in Ankara, Emin traces the major gap in his family’s history to 1925 and Erzincan (Yerzinga).

As the family narrative goes, and one he’s heard repeated since a child, the family was forced to flee Erzincan to Kırşehir in central Anatolia because Armenian were massacring people and burning villages in Erzincan.

“My family doesn’t know much about its past and I’ve only heard this about our past, a story based on what my uncle recounted. So I started to ask my father questions about this,” Emin told Hetq.

And Emin's father is also a carrier of this story. Since Emin’s grandfather died when Emin's father was six, the only source was his uncle who was born in Erzincan and “fled” when he was five or six. The uncle is still alive but bedridden and frail. Thus, it’s difficult to communicate with him.

Emin always found this story more than doubtful, simply because of the historical fact of the 1915 Genocide.

“If they fled in 1925, the question arises who they were fleeing from. At that time, even if there were Armenians left in Erzincan after the Genocide, they were in no position to burn villages and massacre people,” Emin argues.

During his life, Emin’s father returned to the family’s native village just once in order to cull any information he could about the family. As the story goes, not all of the family was able to relocate to Kırşehir. His father asked nothing regarding Armenians because he was only interested in the family’s plight.

“He was unable to find out anything. The only thing that happened was that an elderly man guided him to a fountain and told him that his father built it. But we know nothing of this,” Emin said.

Emin’s next inquiry relates to the name of the village the family hails from – Bagarić (Pakarich, in Armenian).

It never crossed their mind that the name isn’t Turkish,” Emin laughs. “I asked my father what the name of the village means in Turkish and he couldn’t answer. I then told him the name is Armenian and that Armenians lived there.”

Using the map compiled by Sevan Nshanyan (which provides the possibility of finding former Armenian communities in the Ottoman Empire and their current appellations), Emin was able to locate the village and the meaning of its Armenian name; temple/community of God.

“So, what I uncovered is that, one, the family didn’t flee from Armenians. Two, the name of the village isn’t Turkish. And three, many Armenians once lived there,” Emin said.

According to Raymond Kevorkian’s The Armenian Genocide there were 41 Armenian villages in the kaza of Terdjan/Mamahatun with a total population of 11,690 on the eve of WWI. Pakarij (Pakarich) was the largest with a population of 1,060.There were two villages named Pakarich in western Armenia. One was located in the Kaza of Terdjan (Erzeroum Vilayet) and the other in Kamakh (present-day Kemah) in the Erzincan Sanjak of Erzeroum Vilayet.

During his search for additional information, Emin came across the three volume Turkish translation of The Armenian Genocide in Ottoman Turkey: Survivors’ Testimonies published by the Armenian National Archives. In it he found references to his family’s village.

There, he found the testimony of eleven year-old eye witness Vartan Avetisian saying that before the war Armenian and Turks lived quite happily together.

Emin says that he’s not interested in knowing whether his grandfather is Armenian, Turkish, or Kurdish. “My family’s history is cloudy and there are many incomprehensible things. It was oft said in my family that we are 100% Turkish, but I do not like such nationalistic notions and I’m looking for answers.”

While the concept of nationalism was spreading throughout Europe at the beginning of the 20th century, the drive to create nation states, it hadn’t reached the Orient. People living in the Ottoman Empire were regarded as Ottoman subjects and were classified according to religious affiliation; Muslim or Christian. The term Turk as used to define a citizen of Turkey entered into usage after 1923, the establishment of the nation state of Turkey. In the years that followed, Turkish identity was forced, in a variety of ways, on all citizens of Turkey.

Pinar Selek, a Turkish sociologist and writer, argues that Turkish identity was created on the basis of the destruction of non Muslims – the Armenian Genocide, expulsion of the Greeks, etc., and the repopulation of large swaths of Anatolia of Muslims from the Balkans and Caucasus, claiming that they were Turks. The watchword of the day was, “Lucky is he who calls himself a Turk”.

This process however, which produced results in time, now is going in another direction for many in Turkey today are questioning their past, their identity.

Emin was raised with a pure Turkish identity and consequently in a family regarded in the majority in Turkish society where the ideology of Turk-correct-just was preached. However, he is convinced that one cannot be considered 100% Turkish in Anatolia. He can’t understand what drives him to examine his family’s past.

“Perhaps by revealing this I want to show my family that they are wrong, because they are very nationalistic, and because I do not like such things,” Emin said.

The stories told by his friends with Armenian roots have also motivated Emin to raise such questions; friends who have related their families’ stories.

“They grow up and suddenly learn that their grandfather of grandmother is Armenian and were Islamized. They have such stories but mine is very different, simply because there is no history.”

Emin has shared his revelations with his father, who in turn, has also started to ask questions.

The two of them plan to travel to Pakarich this summer to research the family history.

“I am preparing for the journey and will take my camera. I know that there are many churches there. I will ask the local villagers who built those churches,” Emin says.

Rmen 2019-01-25 08:30:07
I am an Armenian man 35 years old I was born in Soviet-Armenian and moved to The U.S. In 1989. Growing up I would constantly hear Turkish spoken around me grand parents, uncles, I would hear Turkish music, wach Turkish movies and soap operas my great grandmother grew up in a Turkish orphanage and did not speak Armenian (later on she married an understood The language quite well but you were still hardly ever hear her speak it ) in U.S. I have met a few Turks but don't have any Turkish friends it's sad that hate is so much stronger then love or forgiveness. I think given the right platform Armenians and Turks will get along fine. What we need as humans is consciousness
Aram 2019-01-25 08:30:04
Wait a minute Xunsap'ha. You seem to have cornered TRUTH to yourself and (of all the people) to Ataturk. How presumptuous of you!!! We need Turks and Armenians who can look at each other and discuss their feelings truthfully and not release hot air balloons in the media.
minas 2019-01-25 08:30:04
It is really not important whether you are Armenian or Turk or Indian. What really matters is that you have the ability to ask questions and that is something that one can rarely see when having any sort of communication with Turks. It is like they are all brainwashed to believe what they have been taught about the glory of the Turkish nation.
minas 2019-01-25 08:30:04
Vahram I have no Turkish friends, maybe you can introduce me to a few, from your wide circle!! I meant the Turks who frequently leave their hateful comments on almost every single Armenian video on Youtube, I don't see them and they are not my friends but in 2014 google has given me this opportunity to communicate with them. And my experience is that they are ready to go against any kind of logic to justify the deeds of their glorious Turkic forefathers. You are lucky if you know some other sort of Turks!
ArmenianLady 2015-06-25 11:06:52
Very courageous man. Only through these people we can bridge the gap and may be establish peaceful diplomatic relations with Turkey. I am sorry to see so many negative and narrow-minded comments above. But ignorance is the enemy of humanity. Individuals can still try to go beyond that in BOTH countries.
Անի 2015-06-24 10:58:06
արյան կանչ
Vahram 2015-06-21 09:12:54
Don't know what Turks Minas has been talking too...He should widen his circle of friends.
GB 2015-06-21 07:47:37
Of course Turks have history, and their history lie across Altai mountain, where newly Islamized nomadic Turks herding their livestock and preparing, for invasion toward Armenia and Byzantine Empire.
Վահրամ 2015-06-20 16:28:05
«Էմինն իր բացահայտումներով կիսվել է հոր հետ, որն էլ նրան սկսել է հարցեր տալ» Սա հայերեն չէ սիրելիս; մարդ չի կարող «կիսվել» ուրիշի հետ...նույնիսկ հորը հետ: