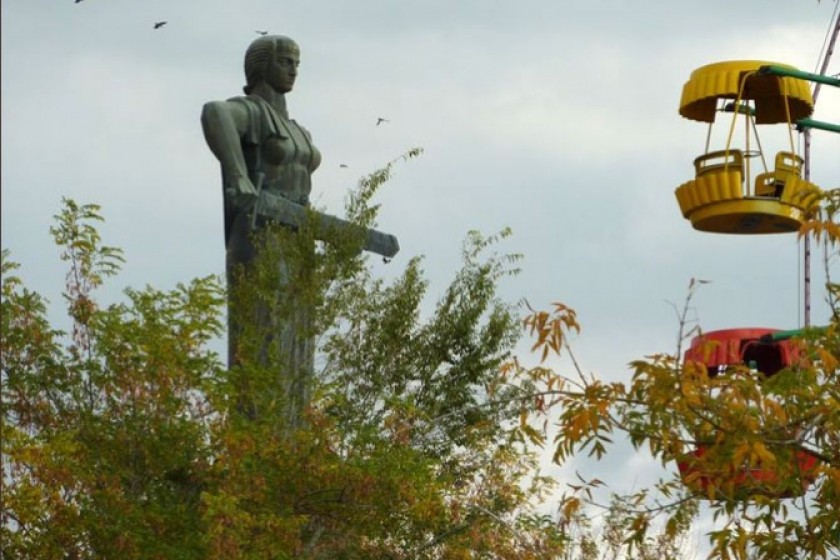 The Sunset of the Union

The Demirchyan Arena, Sports and Music Complex, or simply Hamalir, was built in 1983 and is recognized as one of the greatest works of architecture produced in the Soviet Union.

The complex was awarded the USSR State Prize in 1987 and still remains the shining beacon of Armenian architecture in Yerevan. The Youth Palace, another Soviet Armenian structure, was erected at the end of the 1960’s. Resembling a large corncob, the Youth Palace was a large structure in the hillside leading up to Victory Park overlooking central Yerevan. It included a hotel, swimming pool, marriage licensing hall (zaks) and other facilities. The building was set to be demolished in early 2006 and replaced by a five-star hotel. This plan never materialized and the structure was deconstructed and sold for scrap material. With the fate of the Hamalir once again up for sale, it is imperative to understand the role that these structures play in understanding the historical context and defining the collective consciousness of the Armenian people. 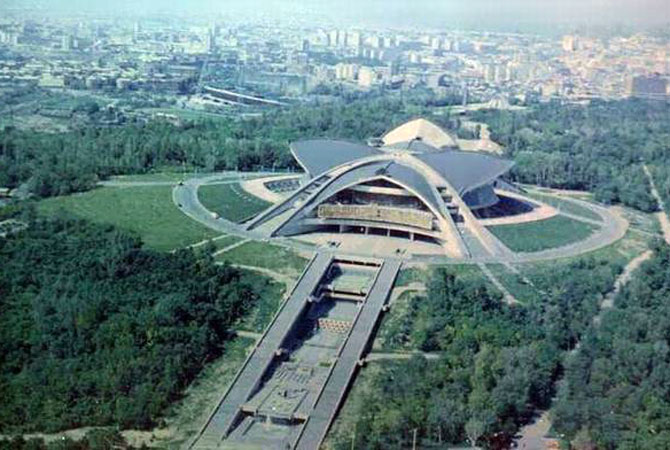 “The fourth period of Soviet influence in the formation of Yerevan’s urban landscape is the Brezhnev era (1964-1982). During this period, nationalism started to flourish again in all aspects of Armenian society. People began to lose belief in the Communist Party and desired a more consumer-based lifestyle.” (Suny, 1993)

“Decentralization from Moscow increased in this era, granting the Armenian government greater economic freedom and the ability to harbor the support of the people by making concessions to nationalism.” (Dudwick, 1997) The nationalist spirit that was oppressed by the Soviet regime and Stalinist influence in earlier years had the opportunity to flourish once more, as a highly literate population rallied a sense of nationalism amongst the people.

“The nationalistic spirit had its impacts on the urban landscape of Yerevan. It was in this period that the Tsitsernakaberd memorial monument was built, allowing the April 24th commemoration of the Armenian Genocide in an institutionalized space.” (Dudwick, 1997) “Monuments were also built in this period to honor heroes of the Armenian liberation struggle in the Ottoman Empire and against the Turks during and after the First World War.” (Arevshatyan, 2010). 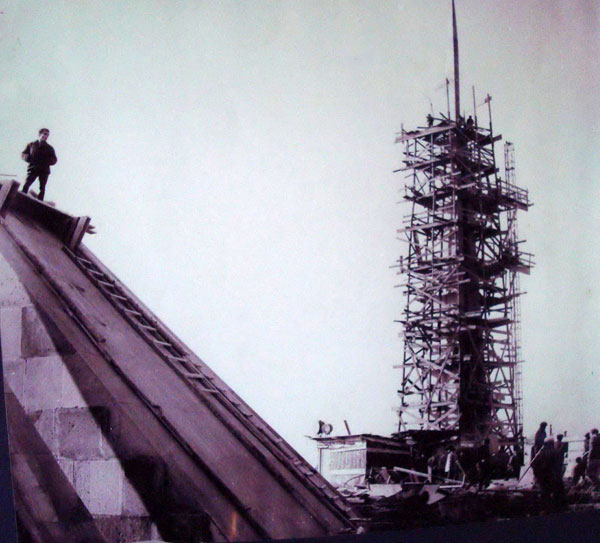 “An interesting phenomenon occurred in the landscape during this period. Certain changes in the urban landscape were not mentioned in the public domain or questioned by society, for example, the removal of Stalin’s statue located in Victory Park in the 1960’s and its replacement with a statue of Mother Armenia. People were aware that these changes were taking place, however people were not asking questions or talking about the changes.” (Arevshatyan, 2010)

Tourism became an established industry in the period as well:

Armenia was one of the major tourist destinations of the Soviet Union throughout the 1970’s and 1980’s. Travelers were directed here by the state-controlled tourist agency, Intourist, and Intourist knew that it could rely on Armenia to show itself well. This was the tiniest of Soviet republics, all but lost in the shadow cast by Russia. But it was also a showcase for cultural pride and national success. The standard of living was high. The people were educated, Illiteracy was almost unheard of. (Karanian & Kurjian, 2002, pg. 41). 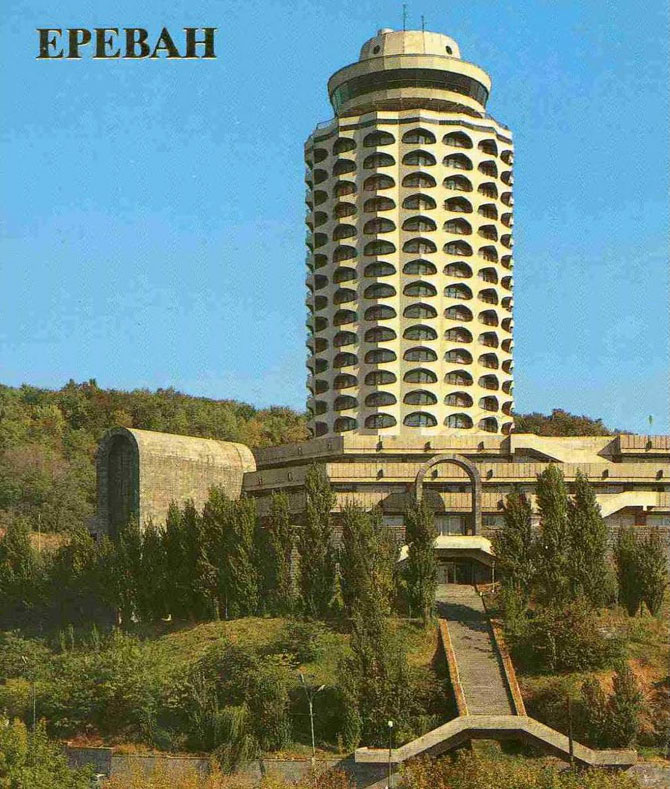 In this era, the use of automobiles started to increase in Yerevan, creating new challenges for the issue of auto circulation in the center of the city (Sargsyan, 2006). The tourism industry, along with a slowly developing consumer culture, allowed for further interaction with foreign cultures. “The youth palace … served as the open window to the outside world because diasporan students lived there and the building symbolized everything new and fresh. You had family there, and the building was kind of like being in a space pod, but instead of the building protecting you from the outside world, it was the outside world; and you would hear stories there of how life was abroad” (Interviewee, 2011). “The housing in this era was the continuation of the Khrushchev barracks and the new version of prefabricated concrete high rises which were assembled in short periods with mostly no internal amenities at times” (Interviewee, 2011).

“The fifth Soviet era that left its imprint upon the urban landscape of Yerevan was that of Mikhail Gorbachev. Beginning in 1985, this was the last era of the Soviet Union. The revolutionary policies of Gorbachev eventually led to the collapse of the Soviet Union.” (Suny, 1993) 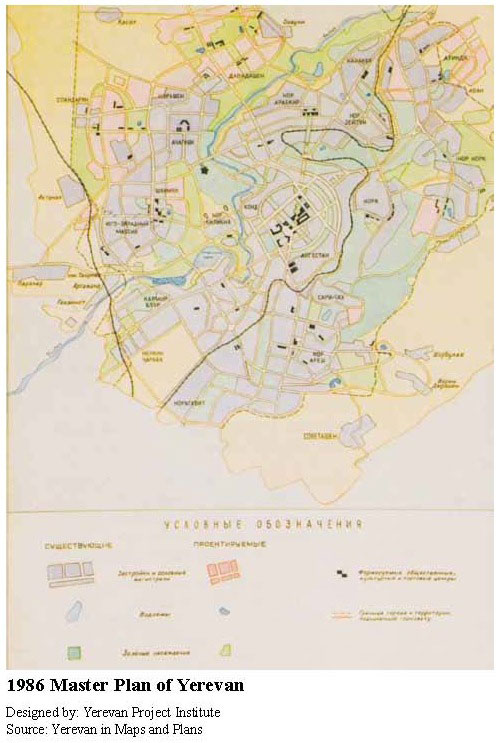 “They were also concerned with the treatment of their fellow Armenians in Karabagh, an Armenian enclave under Azerbaijani control since the foundation of the Soviet Union.” (Suny, 1992) “The protests taking place during the independence movement both in Armenia and Karabagh eventually resulted in violence and all-out war.” (Suny, 1993) The lack of support and leadership by the regime in controlling the violence perpetrated against Armenians in Karabagh throughout the 1980s gave rise to a social movement in the capital of Yerevan.

“In 1988, a devastating earthquake struck the northern city of Gyumri and its surrounding regions, leaving the northern part of the country with a 25,000 to 30,000 death toll. The government failed to organize relief aid to the earthquake victims, further enraging people against the regime. People blamed the regime for substandard construction in an earthquake-prone region.” (Dudwick, 1997)

“All of the elements above, coupled with a nationalistic youth movement, led to the decline of support for the Armenian Communist Party. On September 21, 1991, Armenia declared its independence.” (Suny, 1992)

“ However, even with the hardships facing Armenia in the years leading to independence, the urban landscape of the city center of Yerevan still maintained order. “When we first visited Armenia in 1990, the capital city was alive with activity. Everywhere around the hotel there were fountains. The theaters were full, children were riding a miniature roller coaster in the park” (Miller & Miller, 2003, p. 98). Armenia was ready for a revolution and independence. It had taken a peek through the iron curtain and it wanted to see more.

Amidst the political turmoil of this period, a new master plan was developed for Yerevan. It clearly shows six massifs, separate structural units, around Yerevan that are in the process of being developed.

This master plan would continue to serve its role until the implementation of a new one in 2006. The Soviet period of urban planning is summarized best by one of the interview subjects:“The jobs of urban planning and master planning was carried out definitely because the rules were strict, construction quality is another long and heavy subject altogether” (Interviewee, 2011). The urban landscape of Yerevan during the Soviet era reflects the condition of the Soviet Union at large, given the centralized nature of planning at the time. Yet, Yerevan attempted to maintain its unique and original character by constantly challenging the hegemony of centralized urban planning through nationalistic and cultural symbols that appear over buildings throughout the city. The detailed ornamentation of the buildings in Yerevan’s Republic Square etches into stone the vines and orchards—the agrarian roots of the land—for future generations to see.

In every period of the Soviet Union, political, economic, cultural, and environmental forces changed the urban landscape. The idealist period of Lenin produced the master plan of Yerevan that had its roots in the Garden City movement. Eventually, as political forces become more totalitarian, the use of social engineering became evident in the urban landscape through the implementation of the City Beautiful movement. The Khrushchev period shows the desperation of an economy dealing with planned deficit as it attempts to house its ever-growing population. The “Thaw” further shows the effects of globalization on Yerevan’s cityscape, as consumerism and nationalistic sentiments energized the population, as reflected by the Genocide memorial and other nationalistic monuments. Understanding these connections within the Soviet era provides us with a better understanding of the culture in place before and after independence, and the value of building that are disappearing from the urban landscape of Yerevan in the last few years.

Arevshatyan, R.  (October 20, 2011).  Blank zones in collective memory or the  transformation of Yerevan’s urban space in the 60’s.Red Thread Sweet.  Retrived from http://www.red-thread.org/en/issue-detail.asp?sy=7.