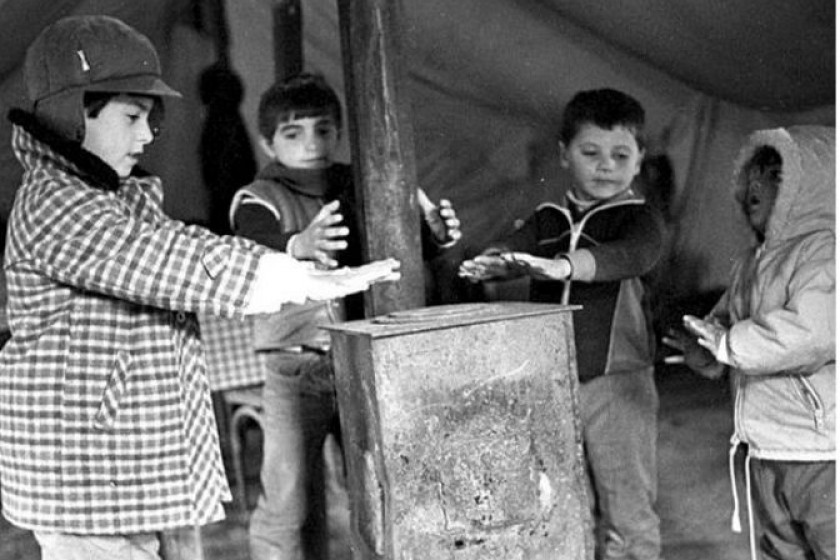 Armenia: The Dark Years of Independence

We clearly remember flying into the Yerevan airport in May of 1993. Except for several lights on the runway, the capital city of the Republic of Armenia was dark. There were no streetlights. Not a single house was illuminated by an electric light bulb. We didn’t even see the headlights of automobiles. From the air, Yerevan looked like it must have appeared in the Middle Ages. (Miller and Miller, 1993, p.97)

Armenia in 1991, after 70 years of Soviet rule, became independent and Armenians celebrated their new-found freedom.

What followed in the next few years would, once again, test the will of the Armenian people. Industrial output plummeted by fifty-four % from 1991 to 1993. By 1997, thirty-five % of household incomes were in the form of bank transfers from families abroad. This trend parallels a phenomenon occurring in Mexico and Central America, where many families receive aid from relatives in the United States (Miller & Miller, 2003). 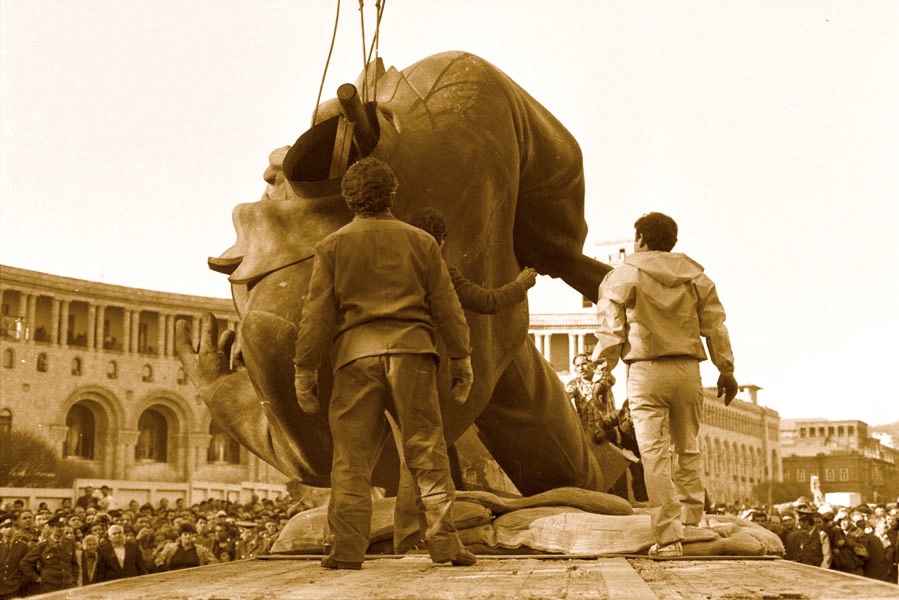 “The war in Karapagh that began shortly after independence ledTurkey and Azerbaijan to close their borders with Armenia, and the collapse of the Soviet centralized market system created a state of economic hardship for the newly independent republic, and Yerevan in particular. Thousands were suddenly unemployed.Inflation was spiraling, and many of the industries operating in Yerevan came to a halt as raw materials, along with a lack of markets, brought production to a standstill. Living standards declined quickly and the highly educated residents of Yerevan and the educated refugees from Azerbaijan fled the country.” (Dudwick, 2003)

“As citizens of one of the first republics to be supplied with electric power after Sovietization, Armenians bitterly joked that they had achieved the distinction of becoming the first republic to go from the space age to the Stone Age.” (Dudwick, 1997, p.491)

“Free market reforms were enacted in the form of the pioneering Land Reform Act, which gave households the right to own property. By 1992, Armenia had 280,000 independent farmers, most of whom had no previous agricultural experience. Farmers were hoping to subsist on agriculture until new industrial or service jobs were made available, or until they left the country in search of work elsewhere.The limited number of experienced farmers complained of the rising prices of production costs.” (Suny, 1993). “Privatization of land did not materialize in the way the government had hoped and did not lead to economic success through agricultural production, as farmers could not afford to buy supplies for planting and harvesting. People began to emigrate out of the country, supporting their extended families in Armenia through international fund transfers.”(Dudwick, 2003)

“The Political Elite with its interconnected government-mafia networks were able to profit from privatization and war profiteering. Small-scale production came to a standstill by 1995 as most entrepreneurs looked for foreign markets to invest in.” (Dudwick, 1997, p. 491)

“The conditions in Yerevan at the time reflected the conditionsin most towns and cities of Armenia. Unemployment was rampant; fuel, food, health services, and electricitywere very scarce; and people had to resort to other means of survival.Some planted their own food, others were forced to immigrate to other countries. Enormous disparity existed between the people and the elite. The government was unable to curb corruption and secure a stable economy that could provide for its citizens.The population of Armenia was demoralized and, by the end of 1995, an estimated one out of three or four Armenians had left the republic.” (Miller & Miller, 2003) “The intellectuals of the country, unable to come to terms with their inability todo research or academic work and segregated from the academic world that they once had access to via Moscow, emigrated out of the country, creating a brain drain in the capital of Yerevan.” (Miller & Miller, 2003). “The collapse of the Soviet centralized market system and the near halt of government function represented the newfound realities that the residents of Yerevan faced. Pensioners begged for food. There were bread and fuel lines in the city during the middle of winter.” (Dudwick, 1997)

“Armenian society was fragmented and looked only to their extended family for cooperative support. A sense of cooperation between government and society was absent. Though the Armenians held egalitarian values from their memories of the Soviet Union, their new reality left them nostalgic, hoping for a reliable system of governance.” (Dudwick, 2003)

The urban landscape of Yerevan reflected the condition of its citizen’s daily lives and reality. 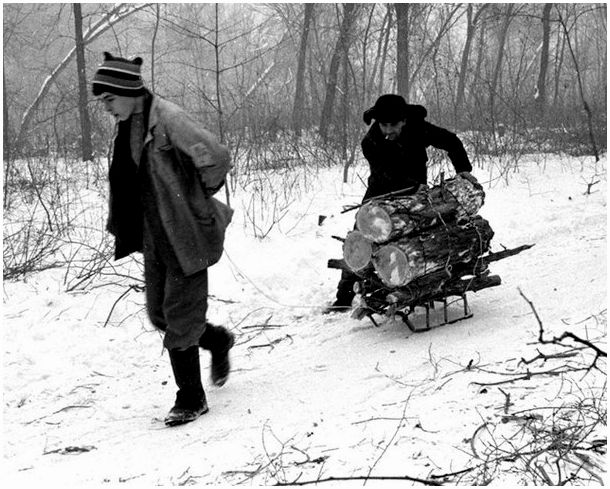 When we first visited Armenia in 1990, the capital was alive with activity. Everywhere around the hotel there were fountains. The theaters were full. Children were riding a miniature roller coaster in the park. When we tried to buy an ice cream cone, we made very little forward progress as people crowded in ahead of us-everyone had loose change to spare. And the women were dressed elegantly, sporting European Fashions. Hence, it was with sinking hearts that we stepped outside the hotel three years later. The construction crane rising from a half-finished basement in the lot next door was rusting. There was no water in the fountains. People were walking in the park, but weeds were growing up around the idle roller coaster. From the appearance of the streetlights, someone had been pirating the copper wire to sell abroad. Later we heard that whole factories were being dismantled, often for the value of steel alone (Miller & Miller, 2003, p.98) 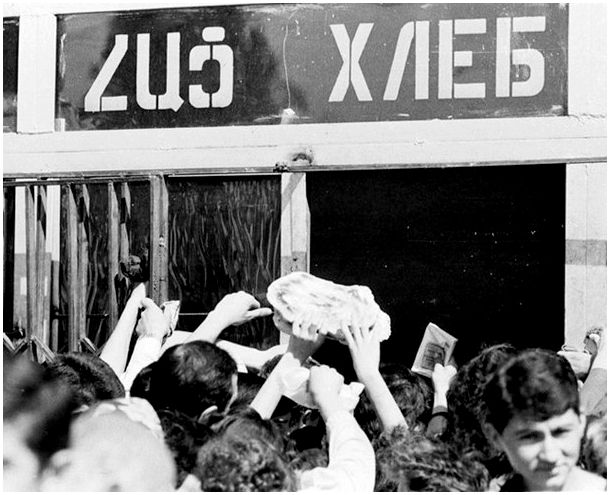 “No revolution can create positive affects, neither now nor 100 years ago, when there is no natural development, in times of revolution people come to power with square outlooks that are not sensitive to the conditions in place and the solutions they provide are out of context” (Interviewee, 2011)

Economist Khanjian states “Privatization before having competition and regulations generates monopolies and market failure. In the former Soviet republics, privatization generated huge monopolies which were able to control the market and raise prices drastically.” (Khanjian, 2008, p. 46)

“The urban landscape of Yerevan was slowly crumbling at this point in the history of the republic, as most buildings, roads, and city infrastructure were not being maintained. About 470 hectares of trees located within the vicinity of the city were cut down to burn for warmth through the three harsh winters, reducing tree coverage in Yerevan to 7.4 percent.” (Abrahamyan & Baghdasaryan, 2003)

“Most of these trees formed the green belt on the hills surrounding the city, serving both ecological, identity, and aesthetic purposes. Armenians were reluctant to cut down trees for their wood, but the cold winters in those years left them no choice. After other items that could be used as fuel were exhausted, they started to cut down treesin and around the mountains of Yerevan.” (Miller & Miller, 2003) The cutting down of mature trees in the urban center would create an opening for further development of semi-permanent and permanent structures in the parks and street medians that they once inhabited (Interviewee, 2011)

“Vernissage (a French word meaning pre-gallery showing) was originally a place for artists to sell their art outside of the conservatory in the 1980s. This market space was expanded after independence and moved to one of the parks that wasin decay at the time.” (Miller & Miller, 2003) Vernissage was transformed from a place where artists displayed their art for sale to an unofficial flea market, where people from all walks of life would turn out to sell their goods (Interviewee, 2011).

This shift in the use of space from a public park to a public flea market demonstrates how the parks in Yerevan were transformed fromtheir intended purpose.If a park was not maintained to function as intended,the people designated a new function to it in accordance with the most common needs.

In 1992, the retail and service stores opened in the basements of buildings that were being privatized and were converted into “commission” stores.This phenomenon led to people selling small products on tables on the sidewalk, with the tables being converted to booths eventually (Interviewee, 2011).

The privatization of homes was positive for the individual citizen, yet the lack of civic development and governance led to the total deformation of buildings and other elements of the urban landscape, such as new floors being added to the roofs of buildings and balconies being enclosed (Interviewee, 2011).

“The ‘Dark Years’ also play a role in centralization, as the economic breakdown forced people to move as close to Yerevan as possible, for it had been distinguished as the hub of international aid and economic activity.” (Miller & Miller, 2003)

The phenomenon of development within the city center continued after independence in contrast to the master plan that was in place from the Soviet period, with development underway in the suburbs of Yerevan. This further concentration of high-rise development creates automotive congestion and safety issues in a seismically active zone (Interviewee, 2011).

Green space was distributed to private entities on a private/public contract that would allow for cafes to operate on public park property. This phenomenon was unregulated, and small cafes turned into restaurants and completely altered the function of Yerevan’s parks. (Interviewees, 2011).

Khanjian, A. (2008). Neo-liberal economic policies and their social effects.Armenian