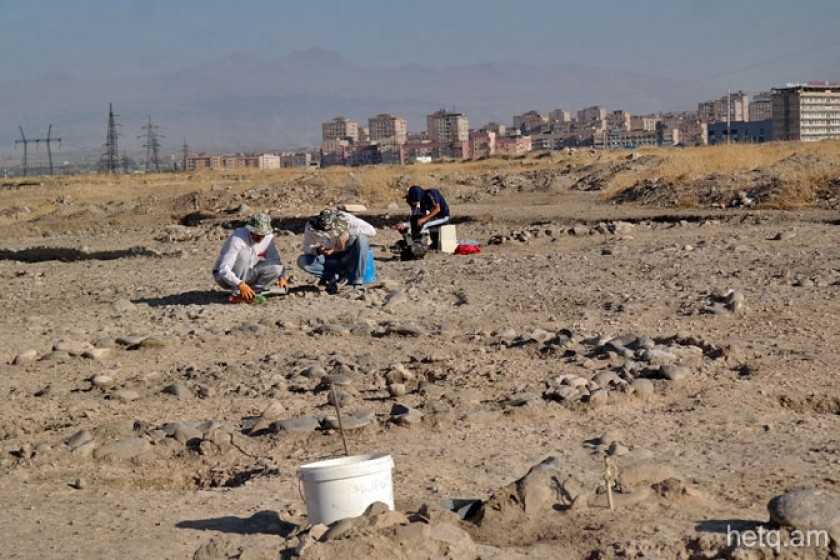 Many Fossils at Uratian Burial Site May be Buried Forever

A new road designed to bypass the western portion of Yerevan will be constructed atop the Karmir Blur (Red Hill), a famous historical landmark in Armenia.

Excavations at the site have uncovered a burial mound dating back to the Urartian period. If the entire site isn’t excavated before the end of this year, many priceless artifacts may be lost forever; buried under the new roadway.

A study of the 2,700 year-old burial site is important because information gained might add to our knowledge of Teishebaini, the city-fortress built by Rusa II in the first half of the 7th century BC.

Experts say that there are few ancient cities where the fort and burial mound have been preserved. “This is unique because we have both a living city, the fort, where residents once lived, and the dead city, the necropolis, where those residents were buried. This reveals the ethnic make-up of Karmir Blur,” says Hakob Simonyan, who heads the excavation team.

The graves can shed new light on Urartian burial rites at the time. Simonyan argues that the fact that the heads of the dead were placed in women's pelvises shows that people of the time believed in rebirth. Another new discovery for all of the Near East, according to Simonyan, is the burial of new born children.

Weapons, ornaments and ceramic vessels have been unearthed at the burial mound. Despite the fact that the graves belonged to common urban residents, their burials were accompanied by the sacrifice of slaves. “Given that Urartu was an empire, it had a diverse ethnic mix. We have to see which were the dominant ones since there are master and servant and master and slave in the graves,” says Simonyan.

He says the position of women was important since the most luxurious graves belonged to them. In the graves, the bodies of women are positioned on the left, those of men, on the right. 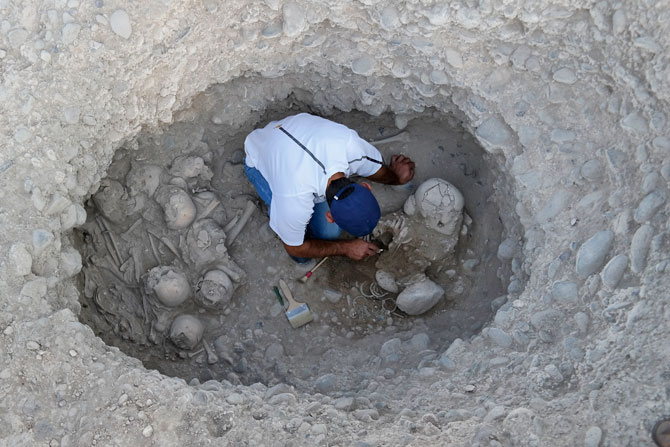 Archeologist Levon Mkrtchyan shows me one of these mounds where they found bracelets, bronze earrings and glass beads; some of which have retained their color. The twelve skeletons found here are still being cleaned. Later, they will be measured, photographed and sent to the laboratory. 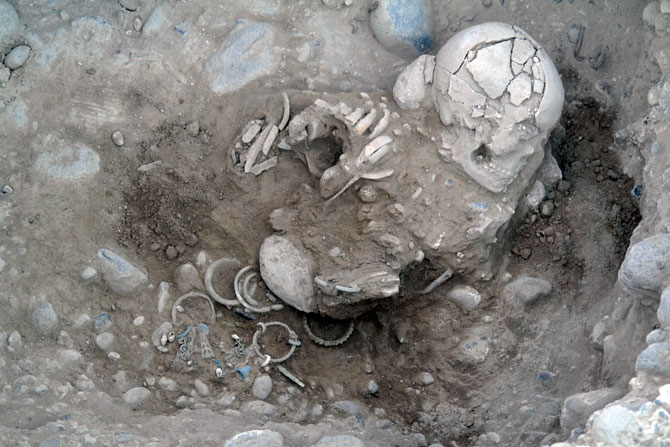 Armenia, however, doesn’t have a laboratory equipped to perform extensive studies. Some of the remains will be sent overseas, to different labs for DNA testing. This will show what links, if any, connect the people of Urartu and present-day Armenia. Some teeth have already been sent to a lab in Copenhagen. “They have told us the most important, that DNA material remains. We’ve sent a second batch to UCLA. We are thinking of sending some to China as well. There is so much anthropological material here that we can send samples to various institutions,” says Simonyan. 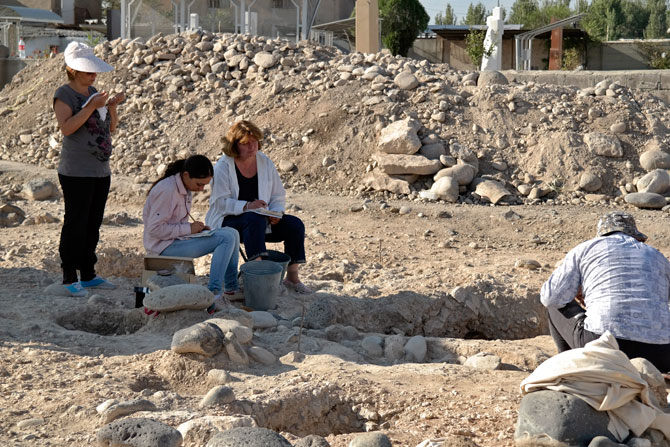 Simonyan noted that the summer heat and speed which with they are working hasn’t been kind to the fossils or iron. “The bones need dampness and the metal, dryness. All this needs to be taken into account. But in this rush to work, it’s overlooked. Here, we are trying to collect everything in the best condition, and the rest we will try to restore at the lab,” says restorer Yelena Atayants.

The archeologists sift the dirt lifted from the burial mounds in order not to miss a thing. “There are some beautiful beads, so many, in fact, that it will take months to string them all together. We do it all with love. If we excavate too fast, many things would be lost,” says Atayants.

The 15 meter wide by 1.3 kilometer long stretch of road, which will pass through the burial site and above the Hrazdan River, will wind up at the Argavand Highway. The road is a component of the Sustainable Urban Development Investment Program (SUDIP) – Project 1, which has been financed with a loan from the Asian Development Bank.

According to the SUDIP website: “This project derives from a request from the Yerevan Municipality (YM) to ADB to define a strategic plan to improve urban transport in Yerevan aligned with the urban master plan of Yerevan city.”

The paradox is that construction of the very road threatening to bury the site revealed the burial mound in the first place.”It must be said that the roadway, in addition to destroying some of the site, also led to such an important scientific find,” says Simonyan.

Preliminary excavations at the citadel site were conducted in 1939 by a team led by Boris Piotrovsky, who served as director of the Hermitage Museum from 1964 until 1990. Over the years, one part of the site was covered with industrial and household waste. Another part, including a section of the burial mound, was buried under the Shengavit cemetery.

Mikayel Badalyan, Director of the "Karmir blur" branch of the Erebuni Museum-Reserve, says that the road will forever limit the expansion of the cemetery, He also points out that due to the road, many will learn about the historical site.

Nevertheless, the museum director believes that the burial vaults must be reserved and the excavation site displayed. “If at all possible, I believe that it would be preferable implement some alternative methods, perhaps overpasses or small bridges, and that the burial site remain underneath. Today, it is a widely accepted practice, at burial sites, to create their copies at the site and to display them aesthetically to visitors and the public at large.”

Anna Malikoyan, a public relations specialist at the Yerevan Development PIU, Sustainable Urban Development Investment Program, says that the issue of constructing overpasses was raised during discussions but that no official proposal was ever made. Overpasses would increase costs by two times,” she says.

Vardan Karapetyan, an engineer at Yerevan Development PIU, says that the only viable alternative at the site remains the road, as planned for. “At the discussion phase, the roadway was placed as close as possible to the cemetery in order to impact Karmir Blur as little as possible. This was the optimal solution.” Anthropologist Armen Martirosyan, who is participating in the Karmir Blur excavations, adds that the practice is employed in a number of countries where development and history collide. He proposes that a small portion of the burial vaults be preserved, instead of postponing construction of the road. This will useful to form an understanding regarding Urartian burial rites. “The main challenge is that we be granted enough time to complete all the excavations. Now, we are working quickly but very attentively,” says Martirosyan, adding that the time allotted isn’t enough to unearth all the burial mounds. He says it would take another six to eight months to do a complete job.

Yelena Atayants says that it requires one to two months to excavate one large burial mound. Working quickly risks destroying the intactness of the fossils and negatively impacts the health of the workers. “We will get it done, but at the cost to our health,” she says.

The Yerevan Municipality rules out any postponement of the roadway construction that is to begin in early 2016.

Excavation leader Hakob Simonyan says, “We can’t perform the impossible, but we’ll do our best.”

Their “best” will be to save some tens of fossils dating back to the Iron Age and send them to museums. We will probably never know what Simonyan meant by “the impossible”.