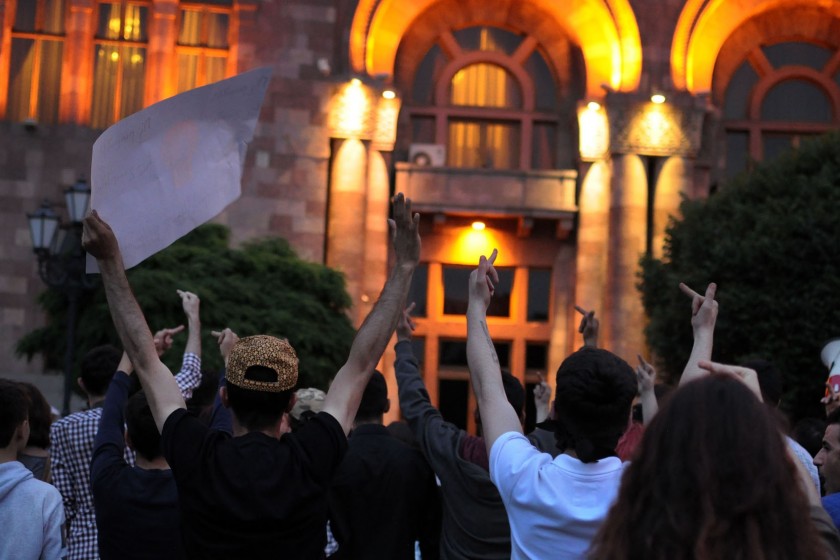 Over the past five years, the government of Armenia has received millions of Euros in credits/loans from the European Union (EU) mostly for infrastructure improvement, technical and budgetary support of official agencies, as well as for implementing educational and agricultural projects.

Hetq has studied these EU loans and grants to see just how transparent the Armenian government has been regarding spending these amounts.

In this article we look at the expenditure process of seven ministries – economy, finance, agriculture, health, transportation and communications, sport and youth affairs, and diaspora affairs. In previous articles, Hetq reviewed how EU grants have been and are being spent by the police department, judicial bodies and some other ministries.

Armenia’s Ministry of the Economy coordinates joint Armenia-EU programs. When speaking of transparency and accountability, it must be noted that we found no detailed financial information on the economy ministry’s website regarding programs supported by the EU. The website does have well categorized information regarding reports, treaties and activities related to programs carried out by Armenian in cooperation with international organizations.

Unfortunately, the ministry does not show the same willingness when it comes to displaying financial records. What’s the reason for this lack of financial disclosure? Doesn’t the public have the right to know how all this outside money has been spent?  Of course it does.

In response to a Hetq inquiry on the matter, Armenia’s Ministry of the Economy noted that the EU mostly provides Armenia with budgetary and technical support programs.

Armenia’s Ministry of the Economy provided Hetq no information regarding programs receiving EU budgetary support. In the ministry’s 2014 annual report regarding the results of primary activities is it noted that:

Such piecemeal information does not tell us how much money the EU transferred to Armenia’s national budget during the period 2010-2015. Nor does it tell us if the yearly amounts increased or decreased and by how much. While the government of Armenia may be accountable to the EU, the public in Armenia is left in the dark regarding such funding.

In contrast to budgetary support, in cases of technical support, the EU finances activities directly; no actual money is received by Armenia.

Regarding technical support programs, Armenia’s Ministry of the Economy provided Hetq with a list that does not include any detailed financial information. Such information is also not to be found on the ministry’s website.

There is an “international cooperation” section in the website of Armenia’s Ministry of Health where it is noted that after the successful completion of activities in the 2012-2013 EU-Armenia program, new proposals were drafted for 2014-2015. To get an idea of what the nature of those activities were, we studied EU-Armenia Partnership and Cooperation Agreement (signed in 1996, in force since 1999). One point in Article 55 of the document, regarding the environment, simply notes “Technical support targeted to health and social issues”. There is another mention in Article 60, “Instruction, professional retraining in health and security matters, with special attention paid to activities associated with high risk factors.”

Since such wording reveals nothing as to the nature of EU funding in Armenia’s health sector, Hetq wrote to the ministry for clarification.

Neither the agreement nor the ministry’s response includes any details regarding the work allegedly carried out by the ministry in cooperation with the EU.

The Armenia-EU Agreement does not reflect the reality of Armenia

One full article of the Armenia-EU Action Plan agreement deals with the transportation sector – “The modernization and development of railways, water routes, auto highways, ports, airports and air carrier infrastructure.”

Naturally, Armenia has no ports or water routes. Thus, one can assume that the Armenia-EU agreement was based on some previously written text without a detailed study of the issues unique to Armenia.

In reply to a Hetq inquiry regarding EU financing, the ministry said it hadn’t implemented any programs with EU financing from 2010-2015.

Armenia’s Ministry of Agriculture is included in several programs implemented with EU support. However, there is no information on these programs to be found in the ministry’s website. In its reply to Hetq, the ministry noted that it provides the grant donor with information in brief meetings and events.

In January 2015, the European Neighbourhood Program for Agriculture and Rural Development was launched in Armenia. The program is financed by the EU (25 million Euros) and the Austrian Development Agency (1 million Euros).

Armenia’s Ministry of Agriculture and State Food Safety Service (SFSS) attached to it have received support through a Twinning project called the “Strengthening of animal origin food and feed safety control in Armenia.” This 21 month project was launched in April 2012 with a budget of one million Euros. The agriculture ministry says results of the project were published in January 2014, when a brief meeting, attended by NGOs and the press, was held between an EU delegation and Armenia’s SFSS.

The agriculture ministry informed Hetq about programs carried out under the TAEX (Technical Assistance and Information Exchange) instrument. However, such information can only be granted after sending a written request to the ministry. And readers can forget about seeing any financial or explanatory data on these programs in the ministry’s website classified on a yearly basis. Another problem is that the websites of some ministries in Armenia provide incorrect contact information. Frequently, one must wait quite a long time to receive an answer to a query sent to this or that ministry simply because the ministry in question claims it never received any.

This ministry also has no information on EU programs in its website. Hetq had to write to the ministry. In its reply, the ministry said it hasn’t received any direct financing from the EU and ministry has implemented the organizational part of joint projects.

Regarding public disclosure, the ministry notes that it only has published general information as to the nature of such programs and news in the press.

Thus, the ministry cooperates with the EU-CoE Youth Partnership organization and has jointly staged a Youth policy symposium with Eastern European and Caucasus countries EECA countries in Yerevan on March 25-30, 2012 and on November 13-14, 2013.

The ministry does not provide financial data on this program.

The Ministry also cooperates with the EU-financed project “The Eastern Partnership Youth Regional Unit.” Launched in January 2013, it is intended as an instrument to assist all the countries of the Eastern Partnership to develop constructive and mutually compatible and reinforcing youth policies. The project will extend to December 2015.

A regional seminar stressing youth employment issues has also been conducted under this program.

The ministry does not provide any information regarding expenditures for organizing/staging such programs and conferences.

The “Youth Events Implementation Center”, a state non-commercial organization attached to the ministry, cooperates with the EU as part of the European Voluntary Service (EVS). Regarding EVS accountability statements, the ministry claims that at the end of the program it provides the financing organization with general information only and that the EU doesn’t ask for financial reports.

This ministry informed Hetq that it has never implemented a program with EU financing.

It appears that the above seven ministries are attempting to give the impression that they are transparent when it comes to reporting on EU financed programs. But are they? Financial data on such programs isn’t singled out in the “reporting” sections of their websites. Frequently, one comes across eloquent descriptions of the aims and results of this or that program, something that is more self-praise than actual nuts and bolts data.