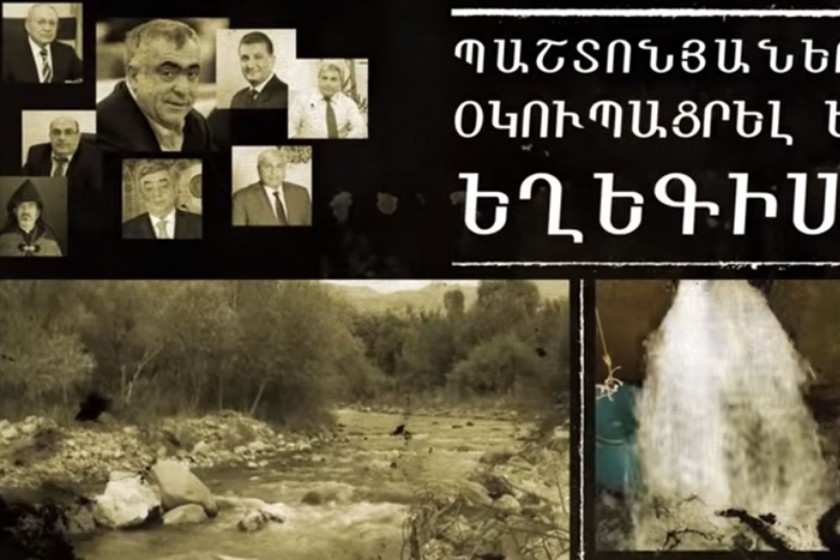 Wild trout are practically no longer to be found in the Yeghegis river in Armenia’s Vayots Dzor province. Villagers say the trout were once plentiful. They are convinced that the hydro-plants are the culprit.

Ghazar Ghazaryan from Shatin village, 51, has worked at a Yeghegis hydro-plant for 15 years. The only benefit, he says, is his job. The rest just damages the environment and village economies.

Ghazaryan says: “Fish are disappearing from the river. There were wild trout and other types of fishes. They have disappeared because of those hydro-plants. Tons of fish have gone. We would fish and catch loads. It was our pastime. Now there’s nothing. Nature is drying up. If the river’s water doesn’t flow, the environment dies, trees die. Those hydro-plants don’t bring any benefit to our people. They are deprived of irrigation water. At least 10 families receive a few cents and can get by. That’s good. Otherwise there’s nothing good about those hydro plants.”

The hydro-plants don’t meet environmental standards when it comes to maintain a sufficient outflow. Fish ladders are there for show.  During the irrigation season, hydro plants are only supposed to operate within specified hours. But such rules only remain on paper. Crops grown by villagers dry up because there’s no irrigation water from the river.

Due to the hydro plants built along the road from Shatin to Getap, the gardens belonging to Grandpa Varazdat, his brother and neighbors, have all dried up. Grandpa Varazdat Nikoghosyan is showing a plant to us: “This is Sashik’s (Sahik is Armenian President’s brother) plant, friends. From here the water flows to Getap. The hydro plant is below. They put the hydro plants in the village. Because of those plants water is scarce. We can’t water and that part as well. There are apricot orchards, grape fields. About 7-8 hectares in that area. 80% is not cultivated.”

28 small hydroelectric power plants now operate in Armenia’s Vayots Dzor province and another 14 now being built. More than half are located on the Yeghegis River and its tributaries. 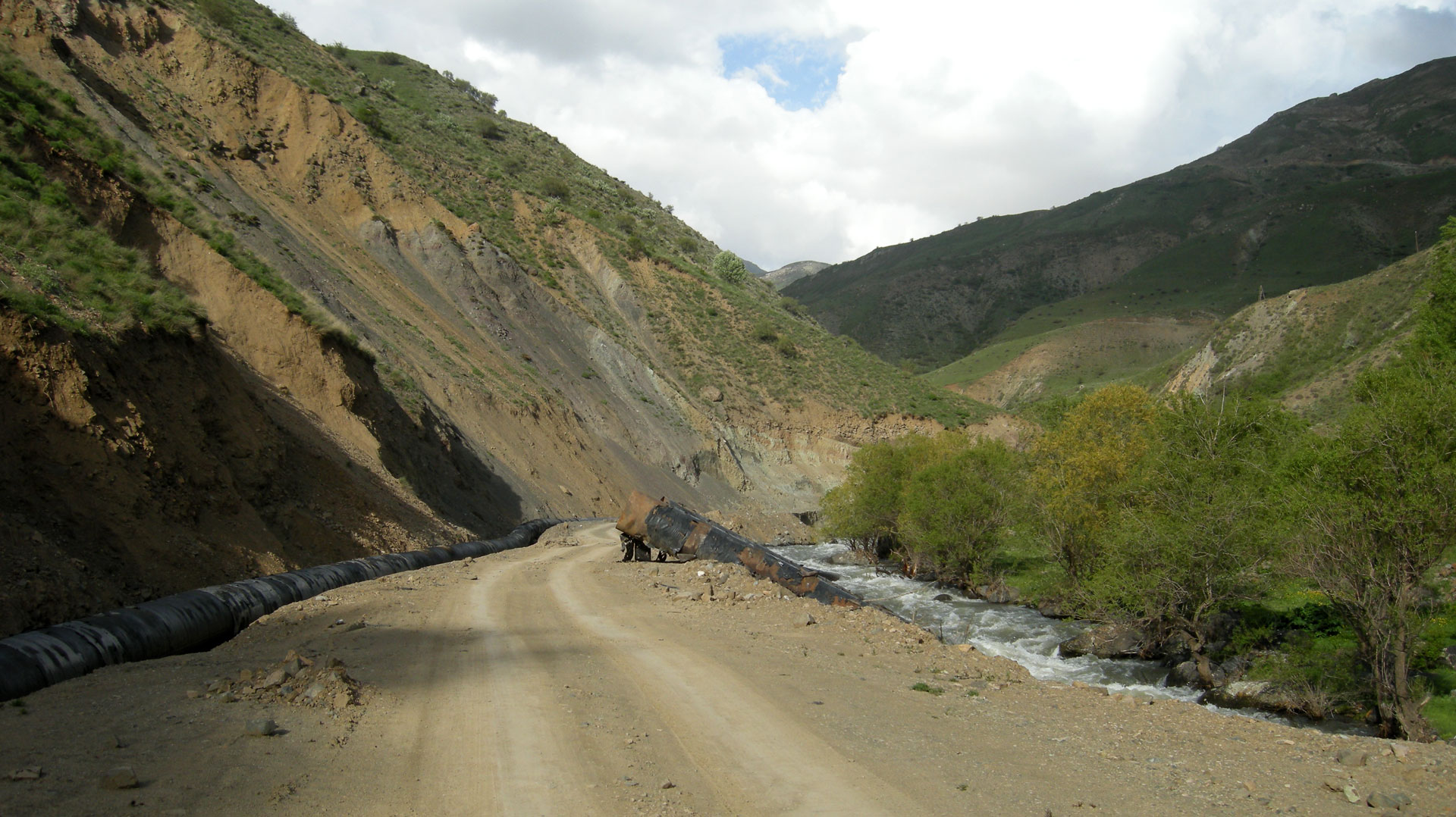 In Armenia, the process of constructing small hydro electric plants is considered a leading way to guarantee sustainable energy. It’s supposed to pave the way for energy independence in Armenia.

Small hydro-plants are seen as a source of clean, sustainable and renewable energy. They don’t pollute or give off hot-house gases but rather use local natural resources to generate energy. They are also seen as developing small and medium sized business. From an environmental perspective, however, most of the hydro-plants in Armenia have resulted in tragedy for the environment, for natural river systems, for nearby communities and their agriculture. Building hydro-plants in Armenia is seen as spurring business in the country with 5-10 residents of each community getting a paid job.

Small hydro-plants have become a lucrative business in Armenia since the government forces the Electricity Networks of Armenia utility to but the energy they generate. This is specified in Armenia’s “Law on Energy Power”, according to which – “within a period of 15 years, all the electric energy produced by min hydro-plants and electric power stations using other sustainable energy resources in the span of 20 years is subject to purchase, according to market rules.”

In this business, however, it isn’t small and medium sized outfits who are benefitting, but rather powerful state officials. Individuals at the highest echelons of government are building small hydro-plants. Usually the plants are registered in the names of relatives. These officials have ‘occupied’ entire rivers. This is the situation of the Yeghegis River and its tributaries in Vayots Dzor. 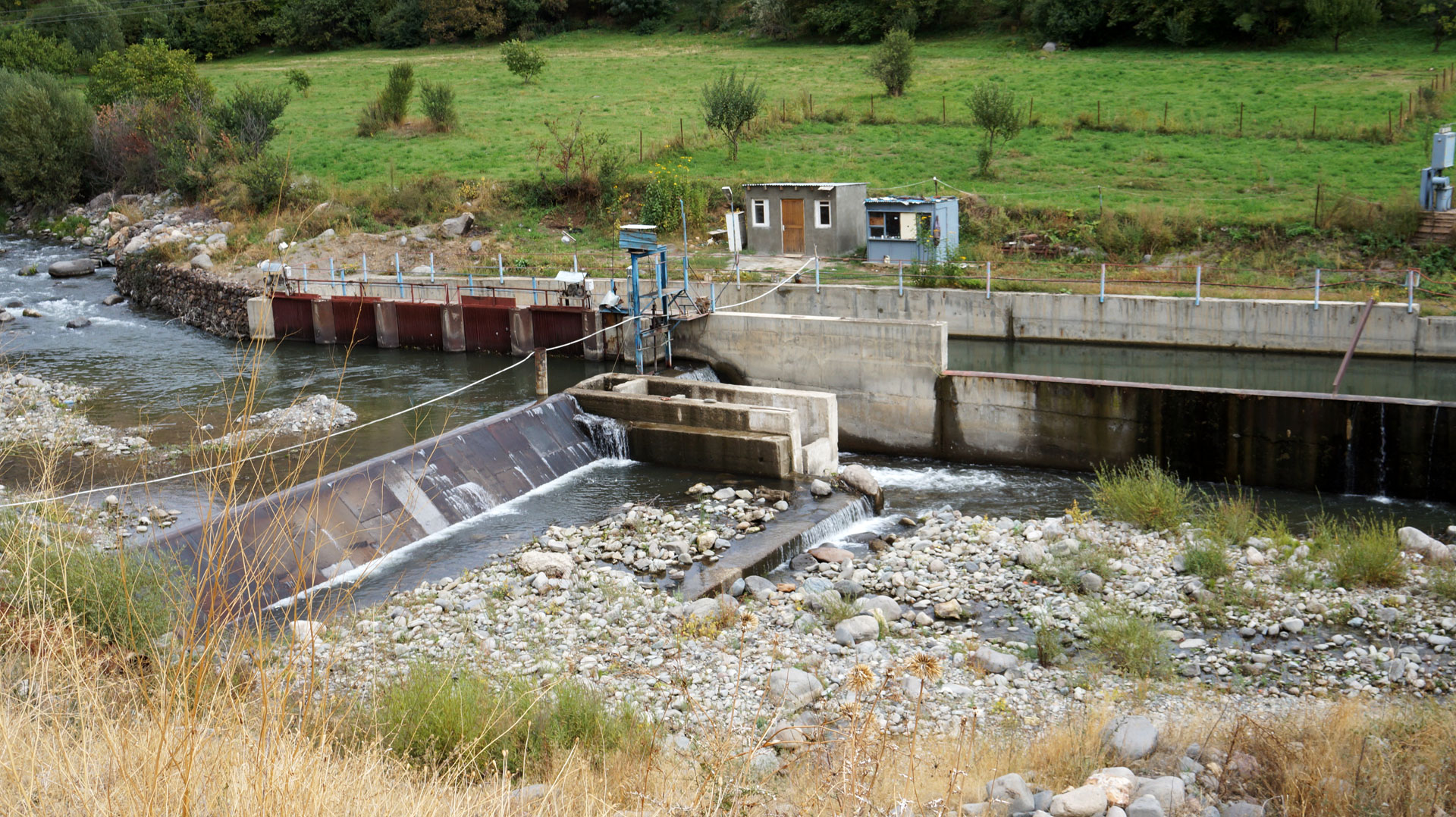 While the hydro-plants in the province are commonly known as “Sashik’s hydro-plants”, officially 50% of the company is registered in the name of Narek Sargsyan – the son of Armenian President Serzh Sargsyan’s brother Levon, a former ambassador. Mina-Maya Ltd. is building two hydro-plants on the Yeghegis.

The first hydro-plant built on the Yeghegis, the biggest of all small hydro-plants in Armenia, is Yeghegis-1. Locally it’s known as the plant belonging to MP Hakob Hakobyan. A controlling majority of shares are registered in the names of Hakobyan’s brothers.

The three hydro-plants operating in Hermon are known to community residents as the “Bishop’s plants”.  The bishop in question is Vayots Dzor Armenian Apostolic Church primate Bishop Abraham Mkrtchyan. The company, however, is registered in the name of Mkrtchyan’s brother and a business partner.  Elegis Ltd. operates the Yeghegis and Hermon hydro-plants, located on the Yeghegis River and its Aysas tributary.

Sunrise Electric Ltd., where the bishop’s brother serves as director, operates another hydro-plant on the Karakaya trib of the Yeghegis.

The company of Davit Ohanyan, son of General Hovik Ohanyan (who has special status with Armenia’s Ministry of Defense), built a 2,130 kWh small hydro-plant in Hermon as well, on the Aysas tributary. In mid 2015, the plant was upgraded to produce another 1,250 kWh of electricity. 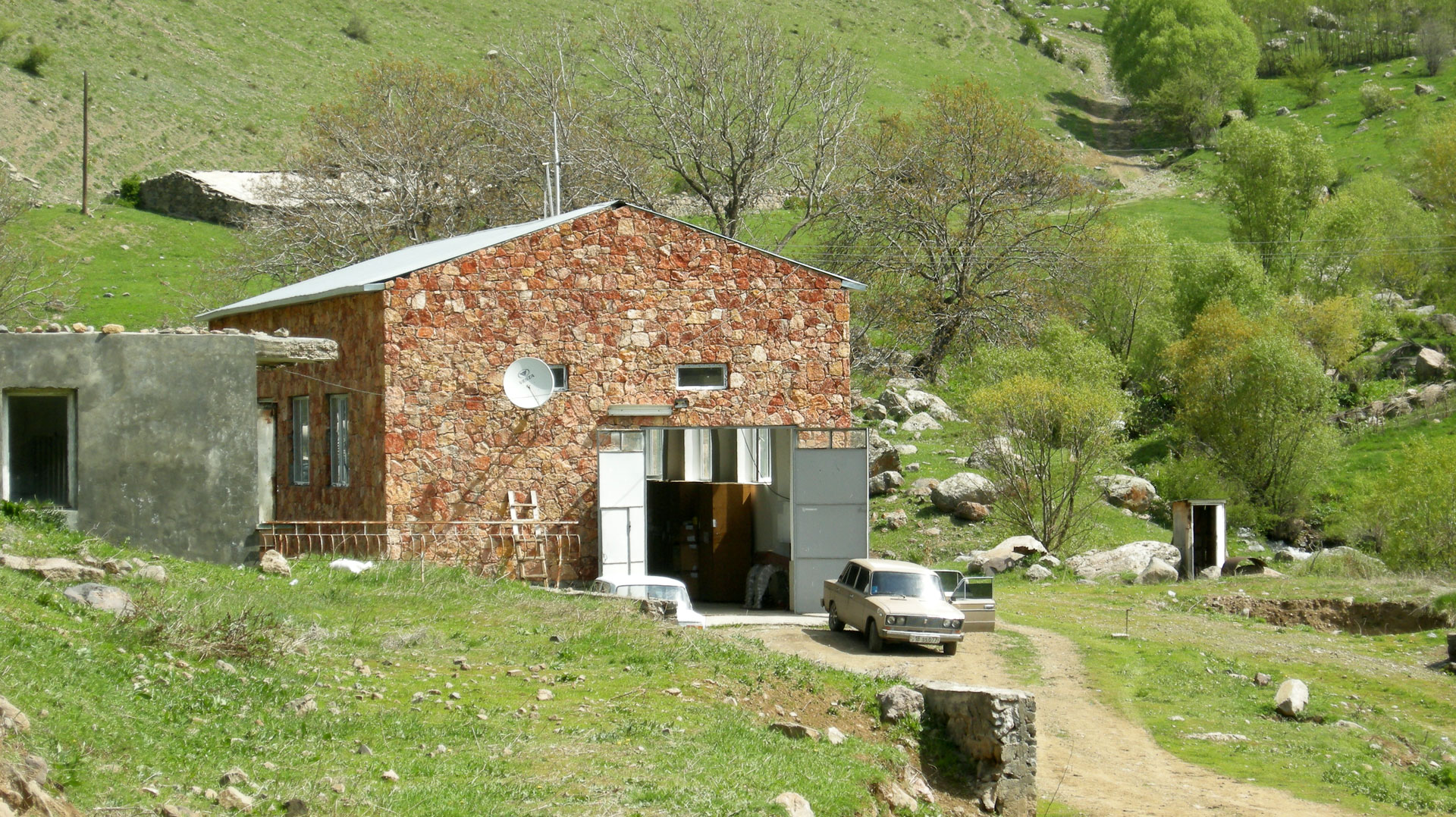 Narek Hovsepyan, son of Aghvan Hovsepyan (Armenia’s former Prosecutor General and currently head of the country’s Investigative Committee), owns half the shares of the Sourb Aghbyur” (Holy Spring) hydro-plant located in the community of Horbategh. After the plant   was launched, local residents petitioned Armenian President Serzh Sargsyan to halt its operation. They sent 3 letters to Sargsyan, arguing that if the plant went ahead, many in the community of 298 would start moving out. In their letters residents noted that 30% of their overall produce had suffered, increasing to 40% for dairy related items. “All the land in that district has dried up. He is one of its residents. The trees have dried up because they don’t provide water for this man to use,”told a villagrer, Qajik Sargsyan from Horbategh.

Their petition went unheeded. To make matters worse, the company built a second hydro-plant in Horbategh even though residents warned that their very survival would be threatened by it.

The “Goghtanik” hydro plant, operating in the community of Goghtanik, is owned by Hayk Souvaryan, son of Hrant Souvaryan, Chief of the Department of Financial Oversight at Armenia’s Central Bank. Hayk is also the son-in-law of former Armenian Prime Minister Tigran Sargsyan and serves as the internal audit chief at UniBank.

Hrant Souvaryan is also involved in another hydro-plant on the Yeghegis River. Joining with officials in other sectors he owns a stake in RAEL GES Ltd. Other stakeholders are ArmavImBank Executive Director Gevorg Machanyan, Colonel Serob Abrahamyan’s sister, former members of the Pan-Armenian National Movement, and others. 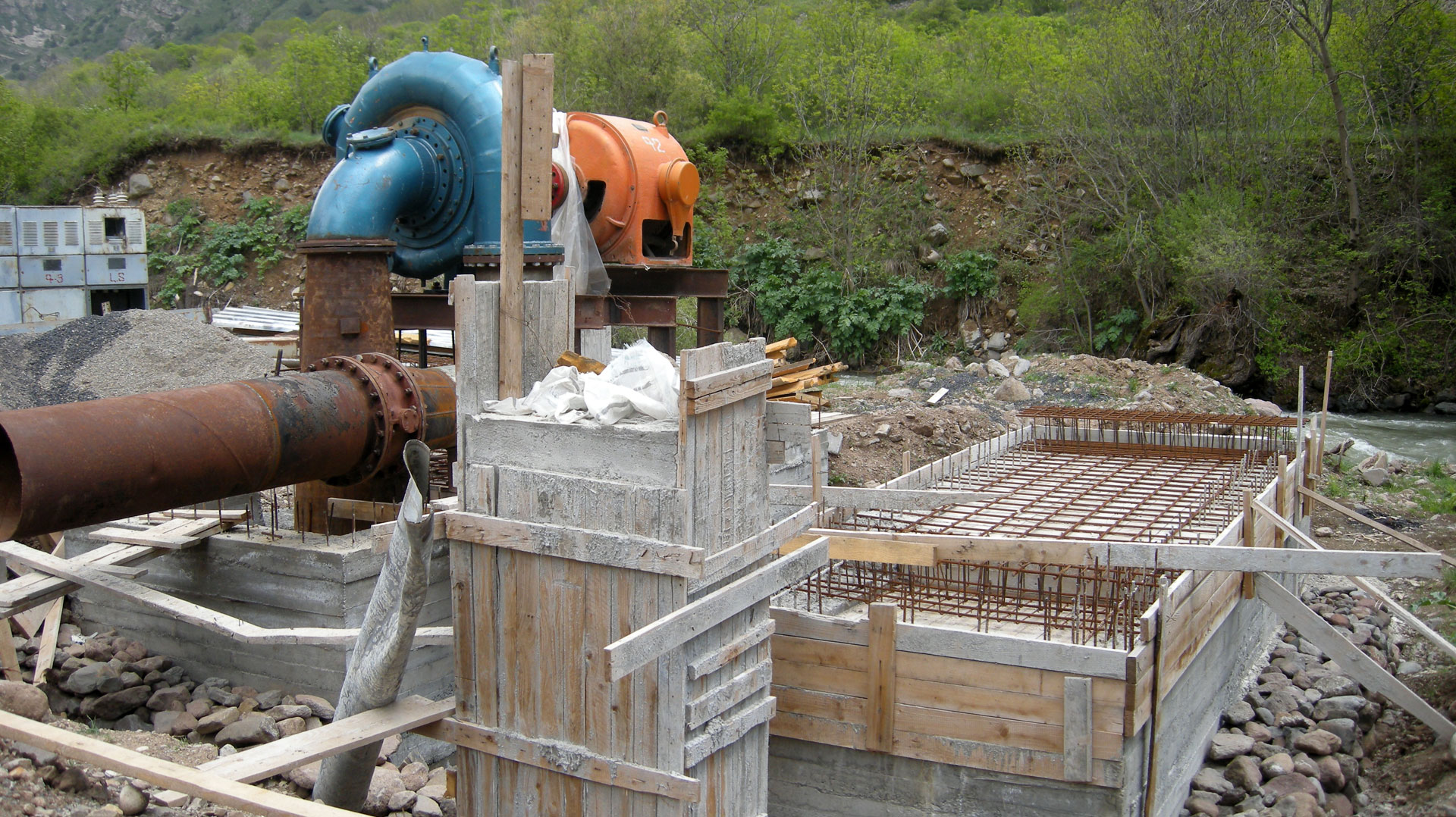 Former Vayots Dzor Provincial Governor Sergey Bagratyan has also constructed a hydro-plant on the Hermon tributary of the Yeghegis. Bagratyan started building when he was serving as governor and ceased because he had no environmental test conclusions. The plant now operates, nevertheless. After telephoning Bagratyan, a worker at the hydro-plant didn’t let us take photos.

Sergey Bagratyan shares ownership in the plant with Prof. Karmen Sahakyan, who heads the Dept. of Histology at Yerevan State Medical University. Bagratyan is building another hydro-plant with the professor on Yeghegis tributary of Artabouynk.

Khajak and Souren Karayan, two brothers serving in the Armenian government, have tried to hide their hydro-plant links by using their mother’s name. Khajak serves as Deputy Chairman of the State Committee of the Real Estate Cadastre, and Souren is a former Minister of Finance and the current First Deputy Minister of the Ministry of International Economic Integration and Reforms. 21% of hydro-plant shares are in the name of their mother Sofik Vardanyan and 39% in their uncle, Hrachik Vardanyan.

This year, Rus Und Har Ltd. started to operate the “Tigran Metz” hydro-plant on the Yeghegis. The owner is Zohrab Shahbazyan, father of Haroutyun Shahbazyan, a former deputy to the chairman at Armenia’s Central Electoral Commission. Haroutyun is also a close friend of business tycoon Gagik Tsarukyan.

According to information released by Armenia’s Ministry of Energy and Natural Resources, as of September 1, 2015 there are 173 small hydroelectric power plants operating in the country. Their total installed capacity is 300MW with an annual electricity output of around 844.3 million projected kWh.

In 2014, small hydropower plants on Armenia produced some 685 million kWh of electricity – just 9% of all the electricity produced.

As of September 1, 2015 38 small hydropower plants are under construction in Armenia.

Armenia’s Minister of Nature Protection Aramayis Grigoryan told in the interview with Hetq, that naturally, hydro-plants have a positive impact on utility rates because receiving cheap electricity and presenting it to the grid impacts rates: “Today, no matter how much we say that rates have gone up, if those hydro-plants weren’t around the rates would go higher. That’s why these operating plants must work efficiently and not harm the environment. If they do, then we wholeheartedly back them. Regarding the issue of hydro-plants sucking up all river water in their pipes, we have reviewed the matter and will soon present a plan to the National Water Council that no new plants are built on such rivers.”

Regarding to the fish ladders Aramayis Grigoryan thinks the problem is the water levels have decreased and that hydro plant was built 10 years ago. 10 years ago the amount of water was different. Fish were able to pass at the level of water noted back then. Now that the water has decreased, so has the river’s height. But because it’s a stone structure, the owners of the plants have to make changes.

“We have agreed with the hydro plants regarding the amount of water they can utilize. If someone wants to construct a hydro plant we tell them that in this region they have to permit such an amount in environmental outflow. Once they maintain such a flow, they can use the remainder, of course taking into account irrigation needs. Whether the water increases or decreases afterwards is a risk they have to take. Today, we are responsible for maintaining the outflow. We have to approach the issue correctly because, as we see, water levels are decreasing. That’s evident. And if climate change occurs in the future, naturally water will decrease as a percentage. This is true throughout the world” Aramayis Grigoryan told.

The Ministry of Nature Protection, in conjunction with the EcoLur NGO, is implementing program called “Green Passports”.  They are jointly inspecting hydro-plants to see if there is a need for plant owners to review their operations and to operate according to set standards.

While small hydro-plants contribute a fraction of the electricity generated in Armenia as a whole, the damage they cause the environment is permanent.

According to data supplied by the Ministry of Nature Protection’s Environmental Impact Monitoring Center, the temperature of the Yeghegis River rose 1degree Celsius between 2009 and 2011. Permeability decreased by 3 units and the oxygen level decreased by 2 units. All this has greatly impacted fish stocks. In the lower stretches of the river, the endemic karmarkhayt (brook trout) have all but disappeared.