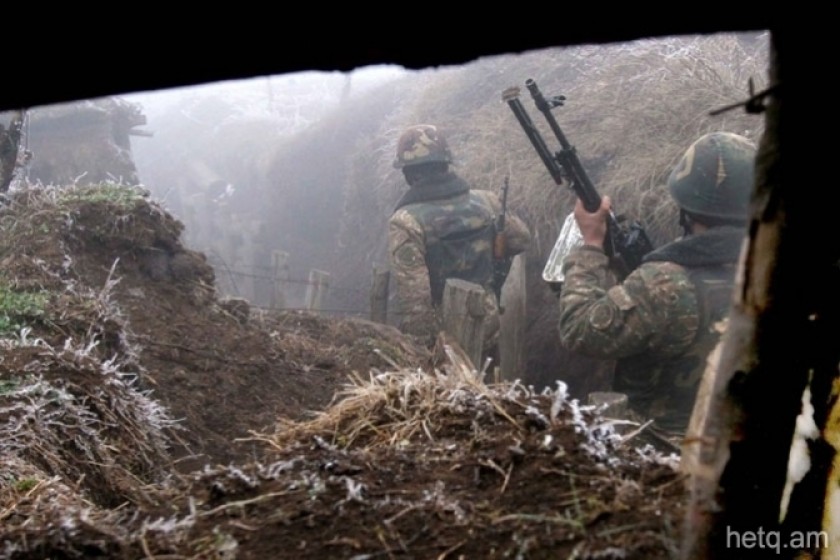 Artsakh Amnesia: Only in the News When Soldiers Die and Bombs Fall

Perhaps, just perhaps, the death of 20 Armenian soldiers on the Artsakh frontline will finally engender some substantive public debate regarding the entire “Karabakh conflict”.

And that number is the latest fficial count. I leave the question of credibility to the reader.

Who can say…perhaps more will need to die. I pray not.

I can’t for the life of me remember the last time I read anything about Artsakh in the Armenian press prior to this recent outbreak of fighting.

And I’m not referring to official press releases and promo pieces about planting trees or Syrian-Armenians growing organic tomatoes in the “liberated territories”.

I’m talking about hearing the voices of people on the ground – the parents and loved ones whose sons, brothers and husbands are sent to Artsakh to defend the borders and independence of the ‘other’ Armenian state.

What do they think about this continuing state of peace and intermittent warfare?

The media in Armenia, outside of a few news outlets, seem to be more interested in counting the number of Azerbaijani tanks destroyed and soldiers killed.

Why doesn’t the press ask some hard questions about this ongoing issue.

Investigate the process of why it is that some conscripts get sent to Artsakh and others get a pass.

Investigate the conditions in which these young conscripts are obligated to serve their two-year stretch.

The list is endless. (BTW, my profound thanks to those few, in the media and civil society, voicing such concerns).

These are real life and death issues for many in Artsakh and Armenia.

As such they demand discussion and debate.

Those in power, the decision-makers, those who send young men to the front, cannot hide from public scrutiny using the veil of patriotism as convenient cover.

What the past few days have proved is that the media in Armenia is woefully inadequate and unprepared to independently cover such events. (No wonder we get livid when the international media can only base their reports on official communiques from Yerevan, Stepanakert and Baku – who else can they turn to?)

If so, maybe various news outlets need to pool their resources and talents. But who am I to say?

Are the deaths of 20 Armenian soldiers enough to incentivize much need change?

I would have thought that the death of even one soldier would be more than enough.

The slogan, “Not One Inch of Land” is easy to mouth. Guaranteeing such an objective more often than not requires sacrifice.

Let’s hear from those making such sacrifices. Let’s not conveniently ignore the issue until the next time more blood is spilled.

We wrap our dead soldiers in the tri-color and deliver them to their eternal rest.

They deserve so much more.

Hasmig B. 2019-01-25 08:30:12
Why is it that it's called treasonous when the author raises very valid points about the status of rank and file conscripts in Armenia who then are sent to fight in Artsakh? Those young soldiers are giving their lives to defend Karabakh while the officials who send them are getting rich by cheating the people and embezzling money from the budget. This is money that could be spent to make conditions for soldiers better!!! I really question the proficiency of the Sargsyan regime (never legally elected BTW) to conduct sound foreign policy, including military affairs. They have screwed up the economy, the environment, education etc...What makes you think they can run an effective army and peace negotiations. Remember the Protocols??
Hasmik M. 2019-01-25 08:30:12
This article is absolutely right and timely. Our journalists should be the ones providing the international press with correct, eye-witnessed information. Otherwise the international media uses propaganda wording provided by Azerbaijan where no one speaks of Arzach as Armenian land but only of Karabach which both countries are fighting for, where it is said that the conflict broke out again after 20 years of mor or less calm wheres there have been so many violations by Azeris in the last years, where Armenia is sometimes depicted as an aggressor etc. etc. I have asked myself the same question during the last days: The Armenian media is only talking about the Azeris, what and how many they have lost, what about our men on the frontline. What about their families? I hear and read not much about them.
Bedros 2016-04-08 16:38:41
Evidently this guy mahmouzian can't read English. If he did, he would have understood what the author is saying. Go to school mahmouzian, then comment.
mahmouzian 2016-04-07 21:02:55
now we need to stand by our boys. latter. you can be the great judge of what we should do.be a mench bozo
Chinese Gerbal 2016-04-06 17:44:36
stay away from armenia azerbaijan
Garo Jeghelian 2016-04-05 06:16:55
Let's focus on the enemy which is Azerbidjan.this article is very untimely.if it was written a week ago I would agree with you.but it untimely .I strongly criticize this article.now we should work against the enemy.
Armen_yan 2016-04-05 04:23:43
I meant traitor, not trader. Also, calling Artsakh 'other' Armenian State is like saying not ours.
Garbis Korajian 2016-04-04 21:19:45
May the almighty give power to our soldiers who sacrifice their lives for their country. We would also like to see the children of the oligarchy and the rich join the conscripts and fight side by side with regular middle class and poorArmenian children. After all, they are also Armenians. The children of the President, the Prime Minister, the Members of Parliament, the son of Dodi Gago, and all alike, we like to see them on the same line as poor Armenians. The country, after all, belongs to everyone. Let everyone cary his weight, rich or poor!