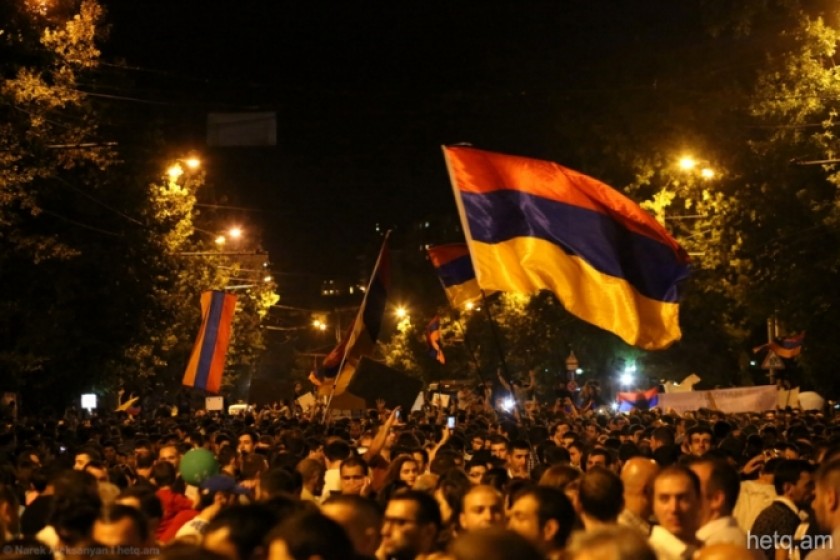 The escalation of early April and the clear and present danger to Armenia’s survival that it underlined raise a number of important questions for the Armenian leaders, opinion makers and members of the general public both in Armenia and in the Diaspora. These questions will need to be answered in a very short order. The situation is very simple and no further analysis or discussion is required.

The questions are as follows.

Will Armenians be able to mobilize the necessary resources to strengthen their defenses and procure modern armaments for the Army, or will young recruits continue to pay with their lives on a daily basis for the negligence and corruption of their leaders as these leaders continue to build casinos, private castles and foreign bank accounts? With the certain prospect of escalating and increasingly aggressive Azeri attacks, will Armenians be able to mobilize and modernize their forces? It’s a very simple question and the consequences are very clear and simple. No further pseudo-geopolitical discussions are needed.

Will the Armenian society be able to remove the ring of systemic corruption that has brought Armenia to its knees, destroyed the country’s economy, industry, science, and sent one third of its population into economic exile? Or will it continue to sink deeper and deeper into poverty, backwardness, and become an eventual failed state with a semi-colonial status protected by another power? Is the Armenian society going to show a level of consciousness that is befitting a nation-state, or will it continue the current pattern of inaction, division and self-destruction?

Will certain organizations in the Diaspora continue to turn a blind eye to the abuses of Armenia’s rulers and the devastating effects of systemic corruption, preferring instead to give all of their attention to historical discussions, symbolic resolutions by foreign parliaments, public gatherings, round table discussions and rallies in front of foreign Embassies? Will they continue to distract the public attention from the life and death decisions of the present day, covering up and enabling Armenia’s rulers as they continue to bring the country closer and closer to a national catastrophe? Or will the Diaspora be able to stand up and say “this has got to stop!”?

Will Armenians continue to discuss what happened hundred, five hundred or a thousand years ago, whether Obama said “genocide”, whether it was Russia’s fault, what the Parliament of Uruguay decided, what Kim Kardashian posted on her Facebook page, talk about historical maps and otherwise continue the pattern of a massive national psychosis? Or will the Armenian society awaken from self-delusion and self-distraction and clear its mind?

In the event that there is no change in the behavior of the Armenian leaders and public figures both in Armenia and in the Diaspora, the prospects are very clear and no further discussion is needed. The Azeri armed forces, emboldened by the recent limited success, will continue to acquire modern armaments and eventually reach an even greater military superiority. The attacks will become more aggressive and the Armenians will sustain more losses and possibly face defeat.

With little leverage, Armenia will have to make major concessions and the population of Karabakh may face a very grim future. Continuing to grow weaker, isolated, faced with a united front from the East and the West, Armenia will have to do what it has done many times in its long history: turn to a third power, i.e. Russia, for protection, become a client state, and become dependent on its unfriendly neighbors.

This is disappointing, this is sad, and this is exactly what will happen if the Armenian society does not awaken in a very short time. Will it?

Maya 2019-01-25 04:30:14
Azerbaijan and turkey are not Armenia's number one enemy. It's corruption. And our brave soldiers are losing their lives because of it. I just have one question for these greedy money hungry corrupted thug politicians. How can you built a villa a castle without a roof? Our brave soldiers and volunteers are willing to fight until the end. But how can they without modern weapons and technology?
Berdj Artinian 2019-01-25 04:30:13
I completely agree with you. We are just 10 years late. At present, peace will come with a price tag, meaning giving up some land and based on past Armenians would rather die than give up land. I live in the diaspora and I cannot tell the citizens of Armenia and Karabakh what is best for them. I prefer to give up land than giving away our youth, on the other hand, can you trust the enemy that there will be peace on a long term basis? berdj
Sassoon Kosian 2016-05-10 17:00:34
Couldn't have said it better. We need to keep bringing up these acute issues and address them ASAP.
Tavit 2016-05-01 16:37:50
The people are basically awake. They just have to mobilize. Diaspora organizational leaders must speak up - this includes the ARF, Ramgavar Party, Armenian Assembly, AGBU, ARS and many charitable organizations - about corruption and treason, otherwise the people and history will hold them responsible too.
Armen Kazaryan 2016-05-01 14:04:12
Are you kidding me. Look at these comments. You are traitors. It is because of Armenians like you we are where we are now. So let me get this straight. You would want to compromise on the thousands of years old land that our ancestors have lived on that we liberated with our people's blood. Shame on the author and theses commenters. God bless our people. God bless our soldiers. Not 1 inch back. This time it'll be all the way to Baku. Then they'll cry about those lands. Long live UNITED ARMENIA. ZINK HYE.
emmiz 2016-04-30 19:24:12
As painful as corruption in Armenia is, it is only part of the story. You can argue that there is more corruption in Azerbaijan. The fact is Azerbaijan has more than 3 rimes the population and ten rimes the defense budget of Armenia. More bluntly, Azerbaijan got oil, Armenia does not. Furthermore, Azerbaijani land is under occupation (outside Karabakh) providing motivation to Azerbaijan . What does awaken mean? if it means a change of leadership the timing could not be worst. What it should mean is for the citizens to accept the facts. Hope this realization would provide the support for the leadership for a compromised solution. Not compromising on Karabakh may sound patriotic, courageous and manly, but is it the right thing?
Mkhitar Gosh 2016-04-29 17:00:45
Berdj you... you the have it... this article, then your comments makes by blood boil. As my head spins trying to find argument to disagree with you and say NO! it is not that low... I can't help but realize that yes thats how low we have sunk... I don't want to look at this subject based on the idealistic visions we were thought, but can't help and AGAIN! God damn it AGAIN realize that the ship on the button of the sea is still a ship...useless, worthless, but some would still call it a ship. Oh only the Goddess Anahit, not the G. O. D. but the Armenian Goddess Anahit knows that pain, cold, and eternal darkness that has fallen over in the graves of our men, Shahan Natalie, Armen Garo, Andranik, Monte, Mher, Vazgen knowing how deep we have sunk... With that rage... I look at Նեմրութ լեռ where Hayk forever BURIED Bel where Vahagn, Antiochus, Aramazd live since the begining of our time and ask: the dearest of all, the all mighty, the keepers of our strength and faith, sins and vertue with the blood we have spelt for that dream, send us the one, send us the SAVER and we shall not kill him... but praise and cherish, love and follow in the good and bad to the heavens or to the bottom of the hells... to you we look for strength and to your mountain I look and pray.
Zia 2016-04-29 08:15:18
Great Article! The only winner since 1st Karabakh War is Russia. Armenia & Azerbaijan suffered a lot. Young soldiers are dying everyday for the decisions made by some stupid ultra nationalist and pro-russian officials. Every one need to respect Karabakh Armenians & hundreds of thousands Azeri refugees forced to leave 7 adjacent territories. Peace will make both countries much stronger and free which Russia never wants. Our puppet leaders appointed by Russia try to keep war frozen and continuous. We are still stupid enough to sacrifice our kid's future for some stupid nationalistic desires and what happened hundreds of years ago... Hope Peace will come to Caucasus...