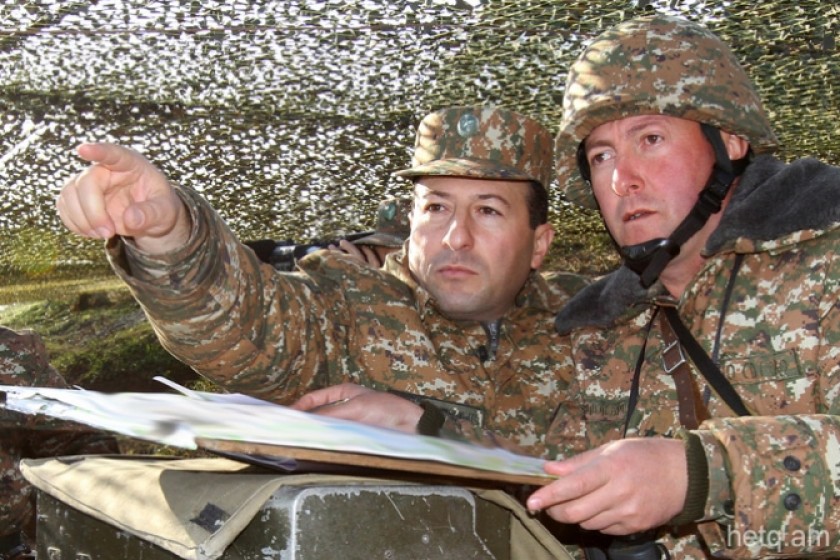 The artillery of the Artsakh Defense Army played a pivotal role in repulsing Azerbaijani military forces in the latest round of fighting along the Line of Contact. Hetq talks to Colonel Genady Baghdasaryan, who commands the artillery, about the four-day war and the tactics involved. Baghdasaryan was recently awarded the Military Cross First Class.

Colonel Baghdasaryan, let’s talk about the outbreak of the fighting. Was the Azerbaijani offensive expected?

The assault was unexpected. But the artillery has always been ready, even from the first day of the ceasefire declaration.

Has the role of the artillery changed from the first Artsakh War? The artillery didn’t play that much of a role in the first war.

The role of the artillery, then and now, hasn’t changed in nature. It’s just that back then we didn’t have as much weaponry as today. Thus, one cannot compare what the artillery achieved in the first war with today.

What was the role of the artillery in stopping the advance of the opponent in this latest round of fighting?

The artillery inflicted severe casualties on the opponent, forcing it to refrain from further military actions. The number of the opponent’s losses was great and their commanders realized that further operations wouldn’t be successful. I believe their rank and file troops refused to fight and that panic had set in.

How did you become an artillery soldier?

I was seventeen and really wanted to serve in the army. I heard that General Ivanyan was recruiting young guys to train as artillerymen. To be honest, I didn’t even know what was involved. But I wanted to serve. So I went and applied. They accepted me. I was taken to the fourth defense region. It was the close of 1993. We had suffered many casualties. I was introduced to a lieutenant and trained with him for four days. They also trained be to serve in a reconnaissance unit.

What lessons have you learned from the April four-day war as an artillery commander?

The first thing is that the opponent is vile and capable of anything. One must never believe anything they say. Secondly, one must always be ready and we must only depend on our resources. Finally, as General Ivanyan used to tell us, we must always train.

Do you believe Azerbaijan will resume military operations?

Let me put it this way, they have the manpower and the weaponry to do so. But the decision will not be theirs. They will be prompted by their allies. In any event, we are ready.

Are you satisfied with the actions of the men under your command?

Without a doubt. They have performed that which is demanded of them. Sure, there are certainshortcomings and we are working to fix them.

The opponent threw many tanks into the battle. Did they achieve anything?

Of course not. If they had a normal army and staff, they should have infiltrated a great distance so that the infantry could follow. After 22 years of preparation, of spending all that money, and launching an offensive against 18 year-olds, all they could do was capture a few posts. It’s ridiculous.

Some are saying that the army isn’t well equipped and that it doesn’t have long-range weaponry. What’s the situation in the artillery?

Sure, we have such weapons. Everything is relative. Naturally, if we compare our weaponry to that of the U.S. or Russia, we’re at a loss. But if we compare what we have to countries similar to us, then we are ahead of many of them.

What if we compare ourselves to the opponent?

Yes, we lag in certain areas, but it has no essential significance. It takes intelligent soldiers and officers to get the most out of the weapons at hand. Azerbaijan doesn’t have such personnel. The latest round of fighting proved this yet again.

As an artilleryman, what weaponry would you like to have.

Why don’t you have such weapons now?

We will. We’ll have everything.