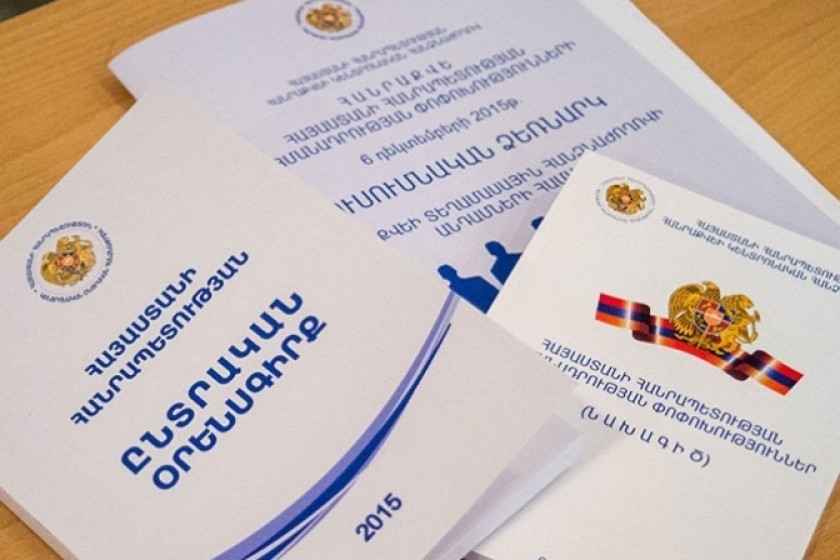 On May 25, 2016 the RA National Assembly adopted the new Electoral Code in the third and final reading, and the RA President signed it on May 28.

According to the “Opinion on the compliance of the provisions of Draft Electoral Code of the Republic of Armenia with international standards” that was circulated by numerous representatives of civil society, including our organizations, on May 10, 2016 almost all the stages of the new Electoral Code - development and publication of the draft Code, involving it in the agenda of the RA Government session, and presenting it to the National Assembly - were accompanied by a violation of the procedures stipulated in the legislation that regulate the development and circulation of legal acts.

Discussions in conditional 4+4+4 format (government coalition, opposition parties and non-governmental organizations), as well as all other advisory initiatives and events were unsuccessful either.

Particularly, in the final version of the Electoral Code the provisions relating to media activities limit the opportunities of free and diversified media coverage of elections even more than in the initial one.

Prior to the adoption of the Code by the National Assembly, the Committee to Protect Freedom of Expression, Yerevan Press Club and Media Initiatives Center jointly prepared and submitted a number of recommendations to the working group developing the new Electoral Code. The latter, allegedly accepting our recommendations, created the impression as if the Code was elaborated as a result of discussions with NGOs. However, in reality, our recommendations were roughly misrepresented.

Our recommendation to provide distinction in the regulation of activities of observers and journalists taking into account the difference in their missions was undermined either. Moreover, in the final stage of development of the Electoral Code, for unknown reasons it was decided that the quantitative restrictions would not apply to terrestrial broadcasters, thus unreasonable discrimination among different media outlets has been introduced.

During the discussions with the government representatives, particularly with the RA Minister of Justice Arpine Hovhannisyan, the undersigned organizations suggested to shift back to the accreditation of journalists instead of applying quantitative restrictions. The concerns were taken into account that under the guise of journalists, random people showed up in the polling stations, serving the interests of various political parties during the previous elections.

However, pretending to accept the advice of media organizations, the decision makers, working on the Electoral Code, retained the quantitative restrictions and meanwhile enforced such regulations of accreditation of journalists that fundamentally contradicted our recommendations.

During such important political event as the first parliamentary elections held after constitutional amendments, it is hard to understand the above-mentioned provisions in a way other than a plan by the government to get rid of those journalists whom it cannot control.

Summarizing the whole procedure of developing and adopting the new Electoral Code, we, the undersigned, certify that:

- The newly adopted Electoral Code seriously restricts the activities of media and introduces discrimination among them;

- The ideas in the recommendations provided by civil society, particularly the ideas of media organizations, have been misrepresented, while creating an illusion as if the working group cooperates with civil society and professional community.

- The same illusion was used to create controversy between media and civil society organizations, holding them as the main responsible parties for the restrictions in the Electoral Code.

This uncooperative and destructive approach of the government creates skepticism and can be an obstacle for us to develop legislative recommendations or to cooperate with government institutions in the future. However, we are going to closely monitor the functionality of the new Electoral Code, in particular the provisions related to media, and to represent our observations and opinions to the public.