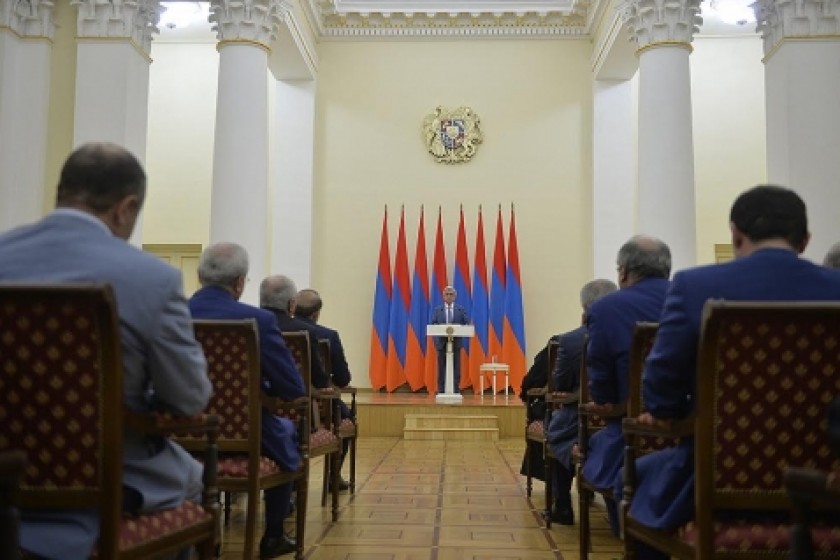 Armenia’s President Sargsyan: The Emperor Has No Clothes

Watching President Serzh Sargsyan’s deadpan and monotone speech the other night regarding the two-week standoff between the armed Sasna Dzrer group and what passes as “law enforcement” in Armenia, I wonder if the Armenian head of state realizes that a sizeable majority of citizens just don’t trust him and that most despise him and the regime he symbolizes.

Maybe Sargsyan just doesn’t care what people think of him. It could also be that he and his cronies live in a world so far removed from the trials and tribulations of the common-folk, that they really can’t see beyond their villas and the walls of the presidential palace.

In front of a zombie-like assemblage of so-called intellectuals, clergy, and representatives of different segments of society (whatever the hell this means), Sargsyan took a hardline approach, proclaiming:

Is Sargsyan for real? Does he realize just how hollow and hypocritical he sounds by mouthing such declarations?

Such smoke and mirrors; truly a shining example of doublespeak that even Orwell would have been proud of.

The “country”, far from being held hostage by a band of Artsakh War vets and disgruntled citizens who “were mad as hell and couldn’t take it anymore”, was actually held hostage for two weeks by the regime’s law enforcement arm and the thugs they payroll to quash any political dissent.

When cops and special forces rampage through residential neighborhoods detaining protestors left and right and see fit to beat journalists and citizens exercising their constitutional rights of freedom of expression and assembly, whose “country” is actually being held hostage?

If Sargsyan were to come clean, he would have proclaimed: “We will not allow anyone to undermine the foundation of our power and authority”.

If, as Sargsyan states, “Problems in Armenia will not be solved through violence or arms”, the logical question arises – “What alternatives do you suggest, Mr. President?”

When Sargsyan makes superficial reference to the civil war in Syria, stating that such a development is ruled out in Armenia, the president really needs to do his homework. It’s actually because Assad failed to provide viable options to those Syrians who opposed his authoritarian regime that the civil war there spiraled out of control. Sargsyan would do well to learn some lessons from the mistakes made by Assad who countered public protest with increasing violence and a clampdown on dissent.

Further along in his speech, Sargsyan says:

In Armenia a simple truth, which it seems could not be debatable in the first place, has prevailed. That truth lives in our system of values, in our mentality, in our kind, and is about our heritage. Anyone can dislike the authorities, or the government, or the President, can be categorically against our policies. However, dislike cannot be a reason for glorifying those who attempt to solve problems with arms.

Such rhetoric turns the issues that gave rise to Sasna Dzrer and the simmering public discontent in Armenia on their head.

Nowhere, in his speech does the president say what measures he and the government will take to alleviate the root causes of the underlying problems facing society today in Armenia. It’s as if he shares none of the responsibility and that all his pronouncements over the past seven years since he “seized” control of the country to initiate real reforms – throughout all sectors of society – have been mere window dressing.  These hollow utterances were more to appease the international community than to address the festering disillusionment and despondency of average citizens.

Does anyone actually take Sargsyan at his word when he stated the following?

Not perfect? Who is asking for perfection? People want to see a sustainable process of real change. Most don’t see such a process. Repeated election fraud, economic monopolization, a judiciary in the pocket of the authorities, lack of engagement between citizens and civil administration, exploitation of the country’s natural resources by a privileged few…the list goes on and on.

Speedy resolution? National accord? Is Sargsyan living on the same planet as the rest of Armenia’s citizens.

What’s Sargsyan’s concept of a “speedy resolution” to the ills holding Armenia back for realizing its true potential. Other than platitudes, what’s his, and by extension, the master plan of the ruling Republican Party. I shudder at the thought. Maybe he refers to his overnight decision to join the Russian-backed Eurasian Economic Union rather than greater political and economic ties to the EU.

National accord? The country, under his “leadership” is becoming increasingly polarized, not the other way round. Doesn’t Sargsyan realize that the seeds for the civil war he ostensibly seeks to avoid have already been sown? It will pit the haves against the have-nots, the powerful against the powerless.

The regime may see fit to cut the budding stalks of the civil war to come, but the seeds underground will keep flowering.

Can Sargsyan, or whoever the figurehead of the ruling powers that be in Armenia, push through the necessary changes to avoid such a clash of interests in the future? I truly have my doubts.

Nor can I say, with any degree of conviction, who or what political force, has the vision and ability to get Armenia back on the right track.

All I can say for sure is that the man who currently presides at 26 Baghramyan Avenue in Yerevan has become the proverbial Hans Christian Andersen emperor stripped of his clothes and credibility.

The sooner people, in Armenia and overseas, see Sargsyan for what he really is, a man who rules through coercion rather than consent, the sooner we can agree that he and the powers he represents need to go.

Garen 2016-08-03 09:24:52
To nd - well thank god you are not the president! Or maybe not!? Things might get wrapped up much quicker ... not in your or your president's favor though.
josef 2016-08-03 09:23:49
Dear Armenians, I m not Armenian, but love Armenia. But I think you should be united. If you are divided, it s big pleasure for turkish bastards.
minas 2016-08-03 02:07:57
It is time for us in diaspora to change our approach. Years of donating money for construction of a road here and a school there had no results. We need to actively engage in Armenia's politics and make it clear for Serjik that cheating in the next election is not going to be tolerated. I suggest forming a coalition of Armenian organizations in diaspora which will include famous diaspora Armenians and major organizations to directly lobby the Armenian government to fix the system or face repercussions. Armenia does not need our monetary contributions, they need us to help them build a real democracy. People there are hardworking and smart and can fix their economy once they have a government which really cares about people. Personally, I will not contribute even one dollar for those silly projects, the only thing which is worth spending money on in Armenia is an organization which will fix the system.
Berge Jololian 2016-08-03 00:17:14
@amb In this case, the rulers of the state are not accountable for corruption and violations of the laws. The Public has been expressing its discontent for many years by leaving the country. In general, a population is willing to put up with hardship and will pull together - as long as the laws apply to all. Their calls for rule of law has been largely ignored. Parliamentarians violate laws all of the state most of the time and run their private monopoly businesses out of the parliament, instead of attending to the needs of the people they are required to represent.
Garen Melikian 2016-08-02 23:23:59
Could not agree more with your article!
MK 2016-08-02 20:48:14
Armenia is now a police state run by sultan serjik the dictator of Armenia. The police have dismally broken articles 1,3,5,6,7,8,10,11,13,14 of the European human rights convention which Armenia is a signatory.
JOE 2016-08-02 19:54:23
SAME LEADERSHIP THAT LOST TO IMPORTANT HILLTOPS REQUIRING THE MOVING OF ENTIRE VILLAGES? BECAUSE HIS COHORTS WERE TO BUSY STEALING OR SLEEPING WHILE 100 OF OUR BRAVEST LOST THEIR LIVES IN AN ATTACK THAT CAUGHT HIM BY SURPRISE?? HE AND THE CURRENT FRAUD RIP FOR MOST REGIME NEEDS TO GO.
amb 2016-08-02 16:48:23
The state is not above the law. Or shouldn't be. We have to remember that one of the founding principals of a free, democratic country is that nobody is above the law. This includes private citizens and the state. The limits of actions of the citizen and the state is set by the law of the land. If anyone or any institution disregards and breaks those limits, they are to face justice in a court of law. That is how freedom and equality is assured in a democratic system. If laws were broken by state's security forces during the recent unrest, then the responsible bodies or persons must come before the courts and justify their actions based on the law.
MK 2016-08-02 15:16:04
In his latest pathetic speech this criminal is thanking his thugs for their brutality against the people,this is Armenia for you since March 1st and getting worse by the day so much so that we have now a state run by a thug for the benefit of his thugs that also includes corrupt oligarch karekin ii and his Bentley bishops.This is the face of sultan serjik and his ruling RPA party joined in crime in partnership with another corrupt party ARF Armenia in order to shut the voice of the Diaspora. The end of sultan serjik could be very brutal like Nicolae Ceausescu.
Berge Jololian 2016-08-02 13:41:29
The end of Serjik and his oligarchs will be very ugly. It will be worse than Benito Mussolini's end who was summarily executed and hung upside down in public.