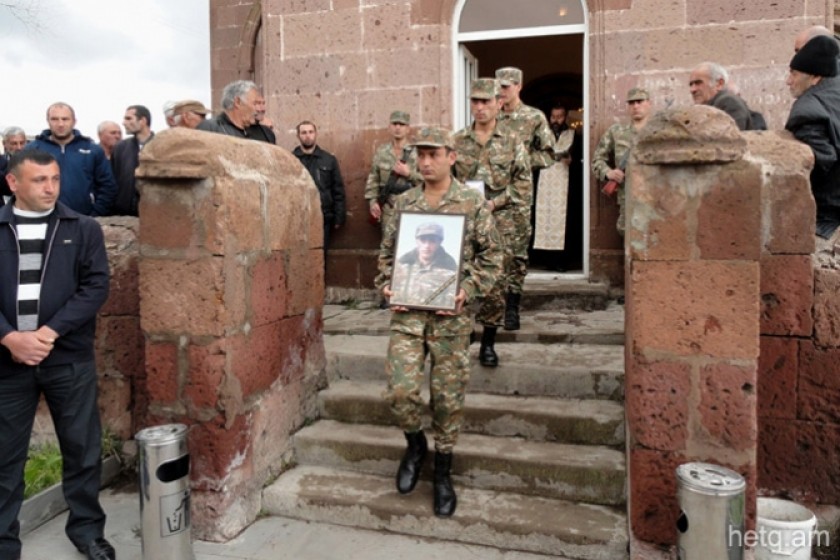 According to the proposed amendments, families of military personnel killed in action and those seriously wounded or suffering disabilities would receive one time and monthly payments in varying amounts depending on the level of the disability.

“The events of April 2016 showed that damage to life and health of military personnel caused by large-scale military operations are impossible to fully cover from the budget. Thus, there’s a need for new financial sources and a new system,” said Minister Sargsyan said.

The situation on the Nagorno-Karabakh - Azerbaijan frontline got worse earlier this year in April. It was the biggest escalation of the conflict since the 1994 ceasefire agreement. Four days of heavy fighting are now known as “four-day war”, which resulted in numerous casualties from both sides and further destabilization of the region.

Each month, 1000 AMD (US$2.50) will be automatically withheld from the salary of every working person in Armenia. The sum will not change regardless of the income amount.

Additional sources would include stock sales, grants and donations. The ministry says it also encourages voluntary contributions to the fund. Those earning minimum wage of 55.000 AMD (US $115) won’t have to pay the 1000 dram, their employers will pay it instead of them.

A special foundation would be established to organize, coordinate and distribute the funds. The foundation will also have an executive board, consisting of representatives from the Central Bank of Armenia, the government and civic organizations - three from each.

According to Defense Minister Sargsyan: “All the payments will go directly to the budget and only after would funds be transferred to the foundation.”

Prime Minister Karen Karapetyan and his cabinet have approved the plan. It will be sent to the parliament for further discussion and voting. The chances are high for the amendments to be adopted by the parliament, considering that this plan is one of the first actions considered as a reform by the prime minister and his cabinet.

Thus, in addition to high taxes, generally low salaries and high living expenses, an additional financial burden will be placed on the shoulders of taxpayers. Although 1,000 (approximately US$2.50) AMD monthly is not a large sum, the way the government is planning to collect it is not fair and raises several issues.

First, literally no public hearings on the issue were organized before sending the plan to the parliament.

The new cabinet seems to have adopted a working style just like the previous one - drafting laws and amendments, approving them quickly, and then sending them to the parliament, which, in turn, OKs virtually anything proposed due to the absolute majority of the ruling Republican Party.

It is a clear indicator that public opinion was and continues to be openly ignored by the government, with justifications like “...a need of new financial sources and a new system” being vague and ill-defined.

If the amendments are adopted by the parliament, taxpayers now will have to deal with another imposed form of taxation, or however it is defined by the authors, which more resembles ‘obligatory charity’.

As news surfaced about the new tax, some critical voices were heard.

Interestingly, almost everyone agrees that the need for better social security and help to overcome economic hardships and anxieties of military personnel is non-debatable, but what is important is the way the government acts to help the ones in need.

Second, inefficient use of taxpayer revenue has always been a problematic issue in Armenia, and the new plan just adds to it.

The creation of new foundation responsible for the distribution of funds couldn’t sound more controversial to sane thinkers given the myriad corruption risks, questions of accountability and preposterous budget expenditures in Armenia.

Just the other day ArmTimes.com reported that the Ministry of Defense is going to pay 50 million AMD (US $104.000) for a concert dedicated to the anniversary of formation of the Army of Republic of Armenia.

Celebrations will take place on January 28 and will have 1200 participants.  There will be posters, pins, special videos and a concert show. The company organizing the celebrations has reportedly been created recently - when the open bid was just announced.

Can an institution willing to spend 50 million AMD in three days for celebrations ensure efficient spending of funds collected to go to Armenia’s soldiers? Government arguments that there are not enough funds in the budget are untrustworthy in this context.

Third, due to the so-called April “four-day war” on the Nagorno-Karabakh frontline, many shortcomings and mismanagements in the army have been partially, if not fully, revealed.

The public continued raising concerns about accountability, corruption and demanded real reforms. Some army officials were fired and some were replaced, but the question of real reforms still exists. Unfortunately, it isn’t as frequently addressed as right after the April events.

Here, it is worth mentioning that the compensation will apply only to those incidents occurring after January of 2017, meaning those already wounded, disabled and killed won’t get any compensations. Two logically interconnected questions arise from this fact.

Fourth, the ‘whataboutist’ tactics that the government has adopted against those opposing the plan is problematic since not only does it further increase distrust of the public towards such sensitive issues as army management, but it also creates jingoistic sentiments openly implying that the critics of the plan are against helping those in need and are bad people. Whereas, in fact, many mention the complete opposite, pointing to evident misconceptions of the adopted tactics.

Finally, choosing to help only the people with disabilities acquired during military service perfectly dovetails with the general direction of militarization of society.

Such a move, directly and indirectly, makes those people who acquired their disabilities outside of military service irrelevant and ignored.

In other words, disability might be regarded as unimportant and insignificant unless acquired during military service. Besides, there are other casualties in the army not resulting from direct military combat actions, and the plan does not envisage any benefits for such cases, making other casualties irrelevant the same way.

However the parliament votes, the new plan has little chance of taking public opinion into account. Public hearings on the issue are planned in the parliament. The MoD also announced that public discussions are soon to be held on the issue.