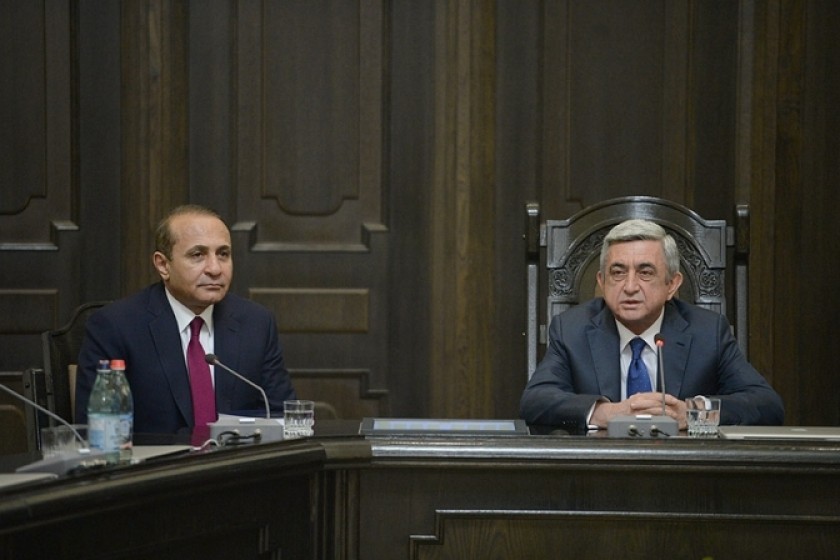 Addressing yesterday’s Council Session of the Republican Party of Armenia (RPA), President Serzh Sargsyan said that the party was fully aware of the problems facing the country and was in great shape to compete in the upcoming April 2 parliamentary election.

“We are prepared to familiarize the people with the real problems we face and to show them how well we understand them,” said Sargsyan, who serves as chairman of the RPA. “We have the most realistic set of programs in place to guarantee progress and, most importantly of all, we have the viable team.”

Sargsyan said that the Republican Party of Armenia has been the one to draft and set the bar high regarding the political agenda in Armenia, at least during the past ten to twelve years.

“This fact may please some and not others, but this is the reality,” said the Armenian president, adding that the party has done all it could to ensure that the April election adhere to the highest standards as set forth by the country’s new constitution.

Sargsyan said that last Saturday he had a very productive meeting with the youth wing of the RPA and that he had no doubt that the future of Armenia could be safely handed over to a new generation of RPA members.

He praised the RPA for conducting objective and constructive negotiations with the country’s political opposition regarding the drafting of a new electoral code. Sargsyan described the process as unprecedented for Armenia.

The Armenian president also noted that while some regard the date of the parliamentary election as problematic, the party’s lawyers have ample proof that, from a legal perspective, the April 2 date is the most effective solution.

(Many argue that choosing April 2 as election day does a huge disservice to those who died defending Artsakh during last year’s so-called Four Day War which erupted on that very day.)

“I should sincerely say that, aside from the legal formulations, I too have my concerns. I would have liked to dedicate April 2 and the following days to our heroic boys and their memory. I would have liked to use those days to show our people what we have done in the ensuing year in terms of building the army, our solutions and achievements.”

Sargsyan revealed that he wouldn’t oppose delaying the election by a few days and asked for patience.

“Let’s wait a bit to see who will be participating in the election. We can then reach an agreement with them, with all without exception. I believe there is nothing preventing us from delaying the election for a few days. If we reach a political agreement then, I am sure, our lawyers will easily provide substantiations for it. The election process will not suffer. Let’s wait and see what happens,” Sargsyan said.

The Armenian president then talked about the return to politics of GagikTsarukyan. The business tycoon has announced that he would be forming an alliance with other political forces to compete in the parliamentary election.

“Let me be brief. I do not welcome Tsarukyan’s return to politics,” Sargsyan said.

The Armenian president said that while he looked favorably on the process of alliance building and the participation of other political forces in the upcoming election, he regarded as laughable the attempts by some alleging that Tsarukyan’s return had led to many leaving the RPA.

“What can I say? You know that this is ludicrous. More than 11,000 people joined our party just in the last few months,” Sargsyan said.

In closing, Sargsyan said that if the RPA won the election, all party members would be represented in some aspect of governance; whether legislative, executive or in internal party matters.

“This is not a matter of individuals. We are to solve the problem of effectively realizing our programs and overcoming the challenges we face. The parliamentary system demands new solutions. When nominating candidates for the executive and legislative bodies, we will take into account the capabilities and skills of each regarding making the homeland flourish and not ambitions.”

Sargsyan suggested that those in the party who believe that their potential isn’t being effectively utilized should find another more suitable venue.