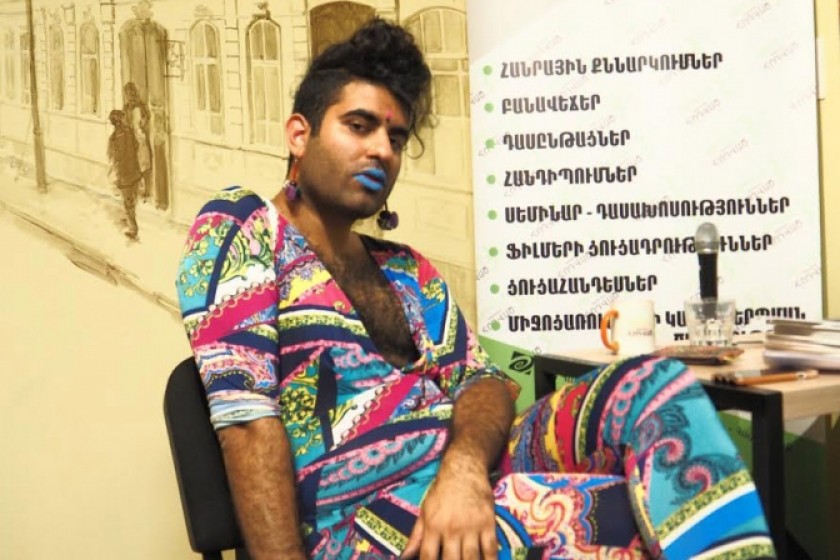 Last week, Yerevan’s activist community had the pleasure of hosting a trans activist and artist from the United States, Alok Vaid-Menon, who came as part of a tour of Central Asia.

Alok held discussions on “End Gender” and “Gay Rights Are Wrong”, as well as a slam poetry performance. Their view of gender as socially constructed was not a view often encountered in Armenia, and challenged participating activists to look critically at the ways that gender is constructed as a power hierarchy which is enforced through institutions, and as a system through which violence is frequently enacted.

As a performance artist, their approach is exemplified through the ways in which Alok chooses to identify and express themselves; they identify and present as gender non-conforming, choosing to use ‘they’ pronouns rather than ‘he’ or ‘she’.

As Alok sees it, “I live my life in a way that interrupts gender in all aspects…how I dress, how I think, how I desire. I try to imagine a world where I and everyone else isn’t gendered”. Walking through the streets of Yerevan last week with Alok, presenting with lipstick, hair bun, nail polish and beard, caused many heads to turn. Passers-by however, noticing Alok’s brown skin, dismissed them as ‘foreign’, that “they are probably from India”. To visit any one of Alok’s events however, it was clear that gender non-conforming is not only confined to foreigners, but in fact there are plenty of home-grown, local gender non-conforming individuals, even if they are unable to express this in public from fear of violence.

This dismissal as ‘foreign’ is familiar for queer Armenians, who have frequently been told that homosexuality, along with feminism, is a Western ‘disease’. The discovery, exploration, and finally expression of any kind of personal identity is inherently conducted through the use of narratives and language. Often queer Armenians, without words to express themselves in their native language, are forced to directly transfer or adapt words from a Western English-speaking context: ԼԳԲՏ (LGBT); քվիր (queer); գենդեր (gender); տրանսգենդեր, տրանս (transgender, trans); գեյ (gay); լեսբի (lesbian); բիսեքսուալ (bisexual), and to then adapt Western narratives of queerness in their struggle for recognition and rights, leading them to be labelled as ‘foreign’ and ‘westernised’ by the local communities, enabling the process of scapegoating, of ‘othering’.

Discussing the practice of scapegoating, Alok notes that “it’s so easy to repress this conversation [about trans people] as minorities or a small group of disgruntled people who are upset” but they practise their work in “not assuming that trans people are a minority and gender conforming people are a majority because in a different possibility and world, I think that a lot of… these people would be a lot more flexible with gender.” They wish to remind us that “this is about you too”, that these binary systems affect all of us. However, some participants felt like Alok was themselves excluding individuals who do perform binary gender, with one noting that “people should have choice, and as the gender stereotypes exist, their identities will be named as masculine or feminine. Any type of gender expression…has the right to exist”.

Alok’s work in non-Western countries centres around how to localise these struggles that centre around gender, to resist Westernisation and colonisation of activist narratives. They note that activists in post-Soviet countries struggle with feelings of being unprecedented, with no access to archives of previous “histories and moments and writers and thinkers who were thinking about these things before”; without a past narrative, it is easy to adapt Western narratives of struggle and activism. Through grants from Western sources given to LGBT and feminist organisations, “people who don’t have access to their own archive are suddenly given an archive”, and thus tend to adapt Western models of LGBT and women’s rights, leading further to the accusation of foreignness. However, as Alok shows activists in their discussion on “Gay rights are wrong”, what happens when those Western struggles for rights are shown to be highly localised through very specific historical contexts of colonialization and racism, and are problematic through their exclusion of trans people?

However, some participants critiqued Alok’s approach itself as lacking localisation but rather too US-centric. One participant felt like Alok’s discussions lacked sufficient open dialogue in order to understand the subtleties of local experiences of the gender binary, with Alok sometimes cutting off others in their responses. Whilst gender binaries in both contexts are linked to colonialism, in Armenian society it is specifically traceable to post-Soviet reactionary nationalism and militarism. Whilst the Soviet Union instigated a state-imposed gender equality, this did not infiltrate into society, as one participant notes; after the collapse and the ensuing anxiety about national identity and traditional ‘national values’, there was a promotion of ‘traditional’ gender roles and ideas of ‘masculinity’ and ‘femininity’ as key for growing a strong nation.

In some ways, however, the Armenian language allows for more flexibility in gender than English. As is common in Western English-speaking queer contexts, Alok’s discussions opened with participants introducing themselves with their name and pronouns (usually ‘he’, ‘she’ or ‘they’), however with Armenian not having gendered pronouns, many participants confessed that they didn’t care which gendered pronoun was used for them. In contrast to typical critiques of queer and feminist politics coming from the West, Alok notes that “language allows us to imagine that there is actually no contradiction between a gender non-conforming life and our cultural ethnic origins”, and this is evident in the issue of pronouns.

In this way, the language in which we express and explore gender is key, as exemplified through the case a few years ago around the use of the word գենդեր (‘gender’). When the government attempted to introduce gender equality laws, many conservatives fought against this, understanding the word to be linked with homosexuality, and therefore with paedophilia or perversity, a fear which persists to this day. This case again possibly points to the ways in which use of English words can lead to misunderstanding and defensiveness in favour of ‘national values’. Alok notes how easy it is to dismiss this reactionary nationalism as ignorant, but is keen to stress that often it conveys “profound and meaningful critiques of colonial feminism and western gender taxonomies and neo-liberalism and hyper-individualism”.

The link between nationalism and a need to retain gender binaries, roles and definitions is one that Alok has noticed in other post-Soviet nations, where the binaries are constructed in order to retain a sense of a Kyrgyz nation, a Kazakh nation, an Armenian nation; these binaries are not limited to gender, but in these countries “everything becomes a question of ‘national’ or ‘international’”. Furthermore, LGBT and feminist communities can start in themselves to become exclusionary of gender non-conforming individuals and start to reflect the binaries and conformity of very society that they seek to rebel from and to refashion. One gender non-conforming participant notes that “I have been harassed more by LGBT and feminist communities than the heterosexual community”, and another critiques the feminist community as “not inclusive for non-binary people, who are more discriminated”. The original organiser of the discussions notes how the purpose of Alok’s visit was to ask these activist communities to challenge themselves as to the “language used, strategies deployed and thoughts expressed. How much are the current discourses helping queer people and how much are they even further marginalising them? … Are we able to resist the overtaking wave of neoliberalism or are we simply becoming instrumentalised by the same politics we are fighting against?”

Alok’s visit to Armenia concluded on the final night with a powerful and vulnerable slam poetry performance, ‘Femme in Public Performance’, covering incredibly personal themes including trauma, public harassment, and transphobia. It was unlike anything else seen in Armenia, which was evident in the audience’s reaction, which was shy to react or engage in a dialogue with Alok as would be typical for this genre of performance. One audience member felt like Alok was indulging in precisely the ‘othering’ which they fight against in their activism: “they also seemed very invested in 'othering' the audience: we were cast in their eyes as part of the "white" multitude…it implicitly placed their Armenian audience firmly in a place of privilege over Alok's experience, which was not only alienating but frustrating, since the only specific mention that was made to our culture was Kim Kardashian, who Armenians from Armenia don't tend to identify with”. With the lights left off at Alok’s request to make the audience feel more comfortable, as night fell and the room darkened, the same audience member noted how the “privilege categorising” of Alok’s performance slowly decreased since “the visual differences among the audience and the performer themselves gradually became indistinguishable by the light. This actually coincided beautifully with one of Alok's final poems which began to offer a little bit of hope in the form of love”.

Despite critiques of a lack of localisation, it is clear that Alok’s visit has encouraged local activists to look more critically at their own history to understand how power hierarchies and gender binaries have arisen, and what sustains them in order to know how to address them. One activist, noting how important Alok’s visit was for the community, now understands how “there should be more focus on the fight against colonialisation, against patriarchy, because of which all sorts of violence and discrimination has been created or is being created”. Alok encouraged learning and growth as activists through self-examination in the ways that we perform gender, and critical thinking about the ways that institutions promote gender binaries as a method for enacting power over others. One activist expressed a wish to change things on an interpersonal level by challenging others on their sexuality and gender: “I really want to challenge people, ask them, how do you know you’re a girl, how do you know you are a boy?”, whilst another activist wished to start “from changing within the community”, reflecting how change can come with homophobia, misogyny and transphobia challenged within the community. Mostly, activists agreed that it had pushed them to think more critically; they were hopeful that despite the use of Western models of LGBT rights and feminism thus far, Armenia, by understanding its own histories around these institutions and binaries, can construct different future narratives.

Florence Low is from London, UK, and currently lives in Yerevan, Armenia.