“They Shall Not Perish”: American Documentary on Armenian Genocide Premiers in Armenia

Shant Mardirossian, a member of the Board of Directors of the Near East Foundation and the executive producer of They Shall Not Perish: The Story of Near East Relief documentary, was recently in Armenia to present the film to the public.

Near East Relief, the former name of the American humanitarian Near East Foundation, saved many Armenian, Greek and Assyrian refugees in the beginning of the 20th century.

The documentary is about America's humanitarian activities at times of the Armenian Genocide refugee crisis, with some rare archival footage (digitized photographs and archival documents from the Rockefeller Center).

Henry Morgenthau, the U.S. ambassador to the Ottoman Empire during the First World War, is one of the key characters in the one-hour-long film. Faced with the accumulating evidence on the ongoing massacres, he officially informed the U.S. government about the activities of the Ottoman government. His telegram (see photo) described the massacres of Armenians in the Ottoman Empire as a "campaign of race extermination". 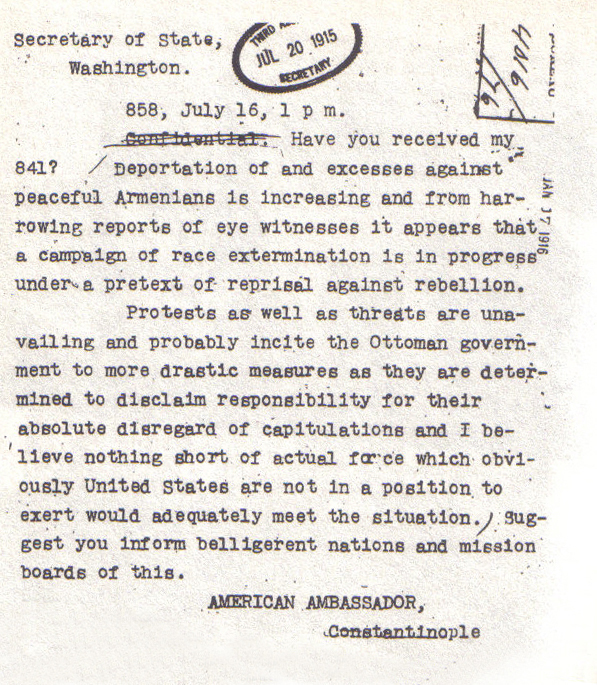 Apart from historical photos and videos, interviews with experts are also included in the film.

Shant came up with the idea of the film years ago, aiming to capture public attention on the important phase of American history, when ordinary citizens withstood injustice and saved the lives of more than 132,000 orphans. It took two years to produce the film.

Mr. Mardirossian, as a diasporan, what’s your family story?

My story is very similar to that of other diasporan Armenians. My father’s mother was from Ayntab and was saved thanks to the orphanage under American management. The other grandmother was from Diyarbakir. My two grandfathers came from Urfa. They simultaneously appeared in Syria as refugee orphans, then they married, forming families.

The grandmother who was saved due to the orphanage inspired me to explore and learn more about the history, and hence, Near East Relief.

What’s the back story of the film?

Having learnt more about the history, I decided to make a documentary. This is an important phase of American history, which is somehow omitted in American schools and books. This film is a reminder, especially for Americans, on how the Americans helped millions of people, mostly Armenians, a hundred years ago. What are the other messages of the film?

The film has two main messages - I’ve mentioned the first already. The second is for survivor Armenians to be responsible and transmit the story to others. I hope these two messages reach the right audience.

Another important message is about the choices that we make as individuals, as a society and as a government. The film shows all these parties.

We see that one person can initiate change. In this case, Ambassador Henry Morgenthau, who called his friends for support. They became two, three, thousands and millions, who made donations and helped for many years, thus saving thousands of lives. In this case, we can see how the public makes decisions and how the government supports its implementation, as President Wilson did.

The opposite is also possible. Some individuals can incite racism or violence or inject it in society, in government, thus contributing to the crimes.

Who are you and who will you be? This is not a question just for the Armenians - this is universal.

Whatever is presented in the film, it’s not just about the past - it’s important for the present, too.

Whether a businessman or a spiritual being or a government leader, we have to address the same problems. Do we want to have the same situation as a hundred years ago? Or should we think about prevention methods?

The film reminds us where we were and where we stand now. The world is in such a state that we are faced with the necessity of making a decision again.

P.S. The movie premiered on April 8, at theNew York Times Center. It has beenaired on American TV channels, and will be on Armenia TV soon.

The film is directed by George Billard. You can watch the trailer here.

Top photo: From the exhibition (“They're finally smiling: Transcaucasian orphans",1920s)