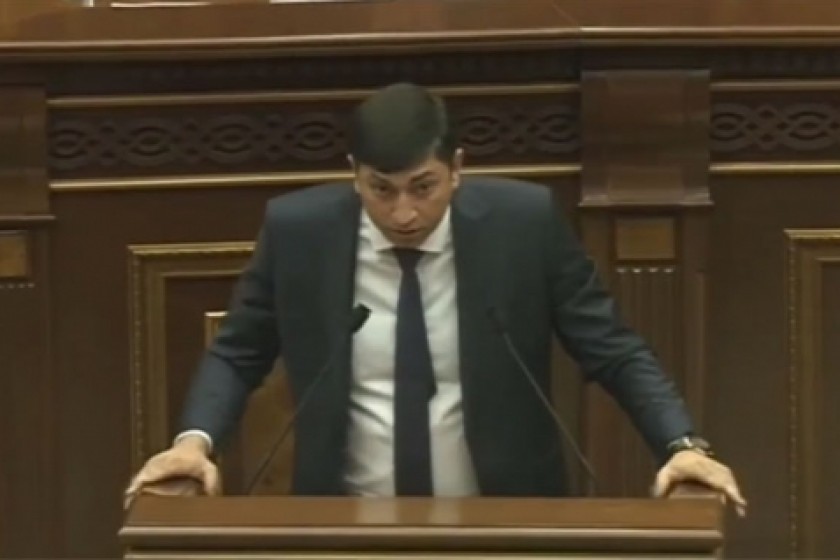 In a rambling speech, his first as a member of the Armenian parliament, ARF member Andranik Karapetyan, representing Armavir, went off topic and began to lecture on Armenian identity and values instead of a bill seeking to create a committee to prevent corruption.

It appears that Karapetyan was incensed when he read a clause in the bill regarding how the institute of whistle blowing would be established and the whistle blowers protected after exposing those engaged in corruption.

“Today, we are all Armenian and we all know the values we bear. European values don’t always correspond to Armenian values. If this law goes into effect, the institute of whistle blowing, can become a reality in our country. What consequences will it have? If it doesn’t work, then why should we adopt the bill,” Karapetyan said.

Going further, the young MP ridiculed the whistle blowing as anti-Armenian and a ruse to initiate litigation.

“So, let’s all open cases against one another. Let’s go to work, not being able to look one another in the eye because we’re suspicious that we’ll be sued, Today, I believe, we face a problem of maintain our Armenian identity, the Armenian type. Sowing and disseminating such ideas, in my opinion, doesn’t suit our country,” Karapetyan said.

A lawyer by profession, Karapetyan sits on the parliament’s Standing Committee on State-Legal Affairs and the Protection of Human Rights.

He worked as an expert at the Control Chamber’s legal department from 2009-2013and then served as director of company manufacturing construction equipment.

The financial disclosure Karapetyan filed in February 2016 as a MP candidate shows an annual salary of 1.560 million AMD and cash assets of 150 million AMD.

Today, such discrepancies are never investigated.

If Karapetyan had his way, the never would.