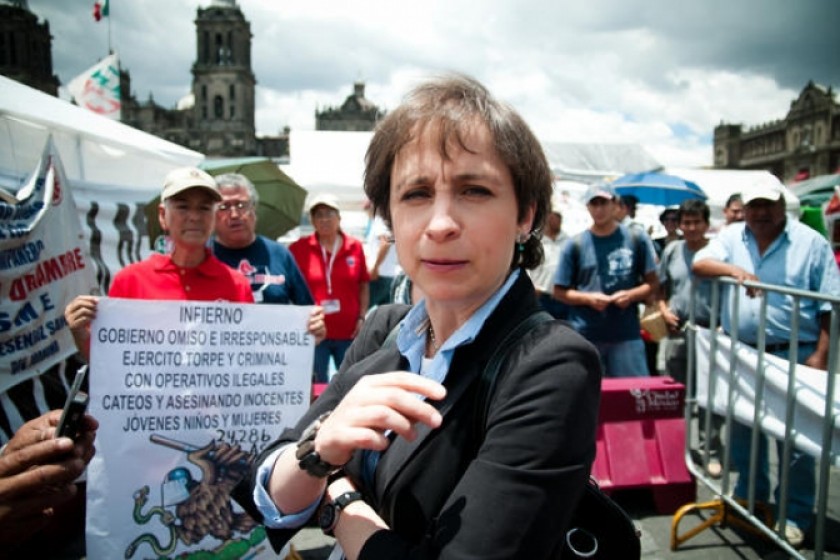 The Mexican government has targeted journalists, lawyers, and anti-corruption activists using spyware intended for monitoring criminals and terrorists, according to a report released Monday.

Researchers at the University of Toronto’s Citizen Lab found that more than 76 SMS messages with links to Pegasus, a powerful digital spying tool, were sent to 11 targets between January 2015 and August 2016. The targeted individuals include some of Mexico’s most prominent journalists, the minor child of one of them, plus employees of two civil society organizations. The adult targets were working on a range of public issues including investigating alleged corruption by President Enrique Peña Nieto and human rights abuses by the Mexican government.

Pegasus was developed and is sold exclusively to governments by the NSO Group, an Israeli cybersecurity company that requires as part of its contract an "explicit agreement" that the tool only be used against criminal groups and terrorists, The New York Times reported.

The software is activated when targets are tricked into clicking on a link.

"Once infected, a phone becomes a digital spy in the pocket of a victim," according to Citizen Lab. Pegasus allows spyware operators to record audio, take pictures and monitor all activities of the infected device, including calls and messages sent through end-to-end-encrypted applications.

Media targets like Carmen Aristegui, a journalist known for her critical investigations into the Mexican government and whose son Emilio was also targeted, received luring text messages. She got one message that appeared to be sent by the US Embassy in Mexico asking that she click on a link in order to resolve an issue with her visa.

Personal and sexual taunts, fake emergency alerts and bills, and threats to physical safety are also employed as ways to break into targets’ phone, according to Citizen Lab.

Nine people have filed a criminal complaint accusing the Mexican government of hacking their phones to spy on them, the BBC reported today.

"The agents of the Mexican state, far from doing what they should be doing legally, have used our resources, our taxes, our money to commit serious crimes," said Aristegui, who is one of the complainants, speaking at a press conference Monday.

A government spokesman told the BBC in response that: "The government categorically denies that any of its members carries out surveillance or interference in communications of defenders of human rights, journalists, anti-corruption activists or any other person without prior judicial authorization."

The accusations of government spying come during a time of "constant violence and fear" for local reporters, according to Reporters Without Borders’ 2017 World Press Freedom Index. Four journalists have been killed so far in 2017, making Mexico the deadliest country for media workers this year.