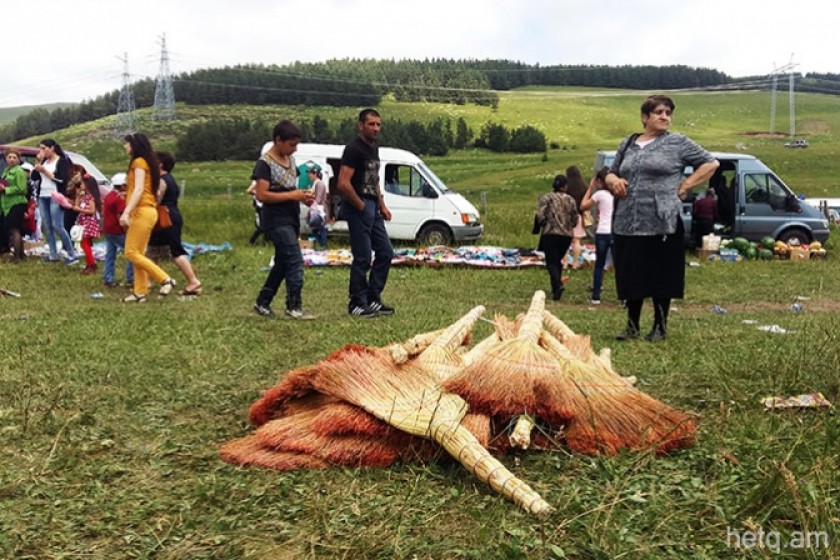 It’s a pilgrimage for young and old alike in the Armenian villages of Akhalkalaki, Georgia.

Young girls wear their best dresses. They even risk wearing high heels, even though they are going to climb mountains and descend into gorges, traversing grassy and rocky roads. 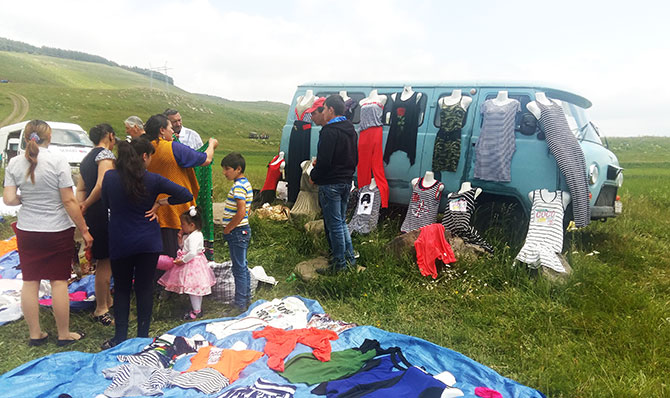 The tradition of celebrating the second Sunday of July brings together four or five villages, whose inhabitants came from Erzurum (Garin), and settled in Javakhk. It’s a holiday here, called Deri. 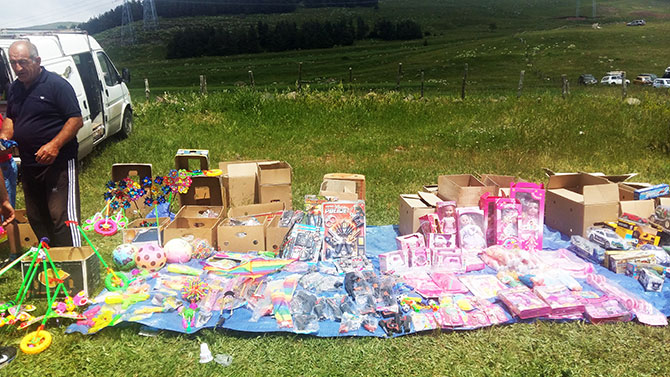 Nobody here knows what Deri exactly means. People say that on the day, residents of four villages in the Akhalkalaki region - Azavret, Bournashet, Lomatourtskh and Ghado, as well as other surrounding villages - climb the mountain above Azavret for the festivities to follow. 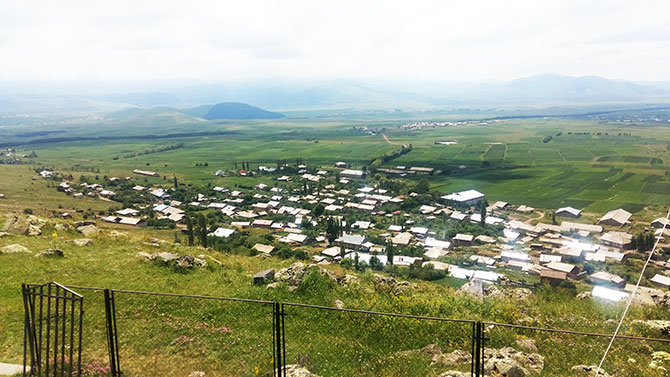 Music and song ring out, villagers hawk their goods, girls show off in their best dresses, boys look for girls, and the elders prepare the sacrificial meal.

The place is chosen deliberately. The small sanctuary, the Saint Sargis Chapel, has served as a pilgrimage site for many years. Eventually, a man with a microphone explains that in Garin’s dialect, Deri means going to a pilgrimage site, visiting a sanctuary or a monastery, lighting a candle, organizing a national celebration. Sometimes it coincides with Vardavar (the Festival of Roses) - the Feast of the Transfiguration - and Deri becomes a double holiday. 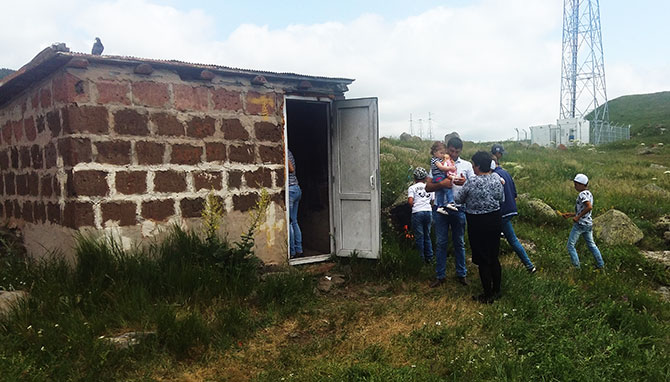 On that day, all kinds of farming activities stop in the villages.

The road leading up to the mountain is rocky. People even use tractors to get there, but the row of the cars on the mountain shows that Deri is full of people this year. 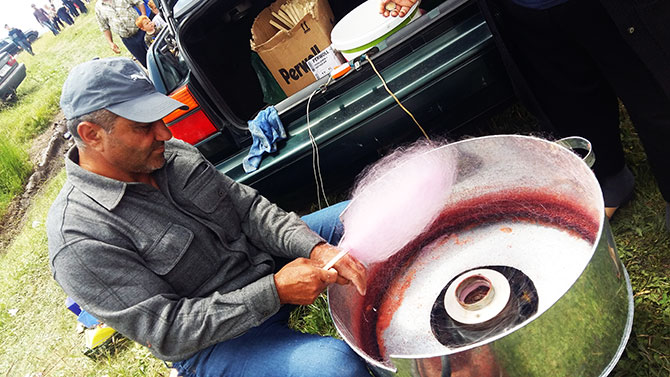 Knkoush, an old lady, uses this opportunity to sell candles. 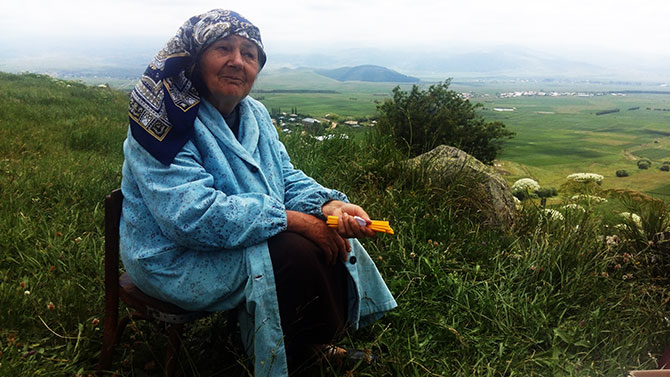 A barricaded road leads to another sanctuary. Not far from St. Sargis, the villagers from Bournashet built a new chapel. 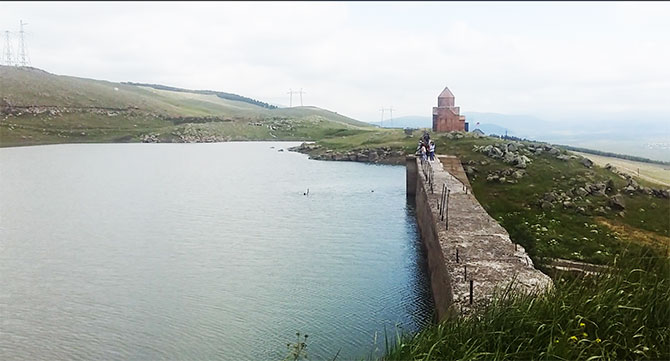 A lamb is being skinned for a sanctuary meal. A villager says that in the past, every third family slaughtered a lamb on this day, but this tradition has become a bit rare now. 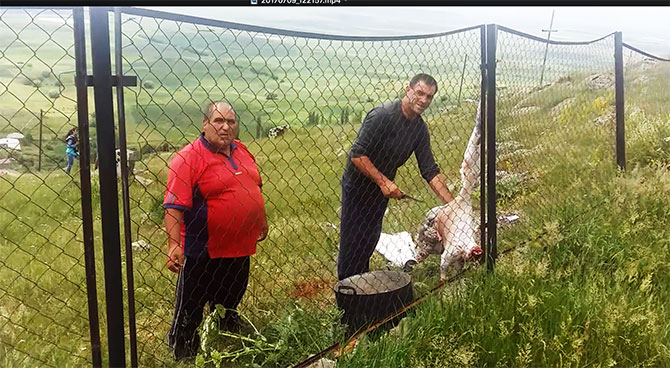 At a distance of around 2 km, a new chapel is built, made of Armenian tuff stone. It’s the villagers from Shahnazar that decided to have their own chapel near the sanctuary.

80-year-old Lena from neighboring Modegham has come to Shahnazar on pilgrimage. After making her rooster do three cycles, she makes a sacrifice and sits down to rest. She says she’s walked around one hour in the mountains in order to sacrifice the rooster for the dreams of her children and grandchildren to come true. She doesn’t go into more detail.

When I go down the mountain, the old lady calls from above, “Don’t forget to put my photos on the Internet.”