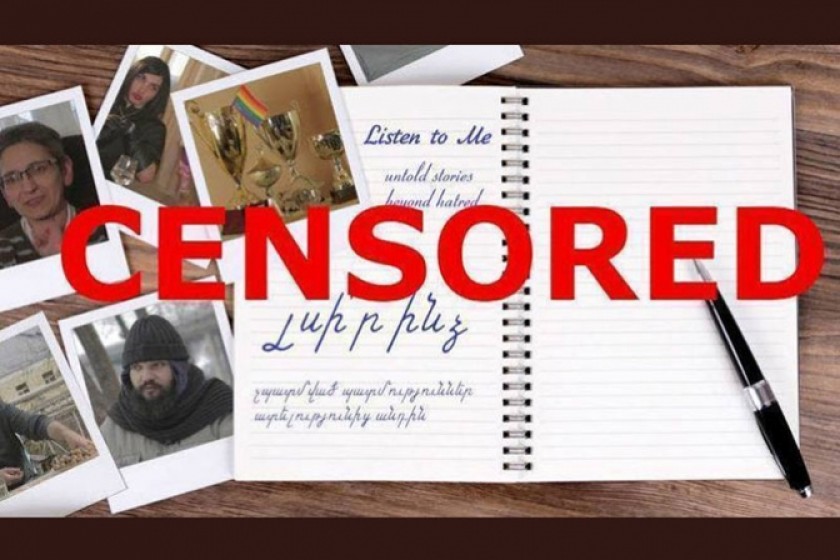 “We want to inform you that the ARMENIANS: INTERNAL AND EXTERNAL VIEWS non-competition program is completely cancelled. We apologize for any inconveniences.” (Тhis is the letter of Golden Apricot to the filmmakers, who were involved in the program)

There would be no need for this sort of letter if the people and institutions in Armenia that are meant to protect the interests of the films and to develop cinematography were not frightened and did not give up and shrink  from the demands of a few unknown people and cancel the whole program from the festival.

We condemn the actions of both the Union of Cinematography of Armenia, that has dared to censor the special program of the Golden Apricot International Festival because of the themes broached in the films “Listen to Me: untold stories beyond hatred” and “Apricot Groves”, and the Golden Apricot management, that has sent a note to 37 film directors without any explanation, rather than putting all its efforts to restore the whole program in another venue.

By removing the program from the festival, the “Golden Apricot” is giving a green light to censorship in Armenia and confirming that in Armenia any film can be treated in an arbitrary way. Moreover, the Armenian people are well acquainted with the results of censorship when taking into consideration the incidents of censorship during Soviet times, by the Young Turks, by  the Ottoman Empire and others.

Golden Apricot should immediately restore the screening of all films regardless of the format. Otherwise the Golden Apricot International Festival should accept that they are the ones who are legitimizing the censorship and changes in the Festival. This institution which is accepted by the Armenian society should not block and hinder the development of Armenian cinematography.

We are calling upon the organizers of Golden Apricot to protect the films selected by them, instead of issuing an apology, and to restore the whole program and screen all films in another place and to publicly condemn the actions of the Union of Cinematography of Armenia. Only by restoring the program can the festival maintain and protect its former reputation.

Robert Davidian 2017-07-10 20:28:05
It's horrible that the powerful Golden Apricot Film Festival is allowing backwards-thinking homophobia to drive it to go so far as to cancel an entire program of the festival - disappointing talented filmmakers and audiences who the festival previously promised to proudly screen the films! This is short-sighted because it now puts a shameful blemish on this festival as being cowardly and homophobic.