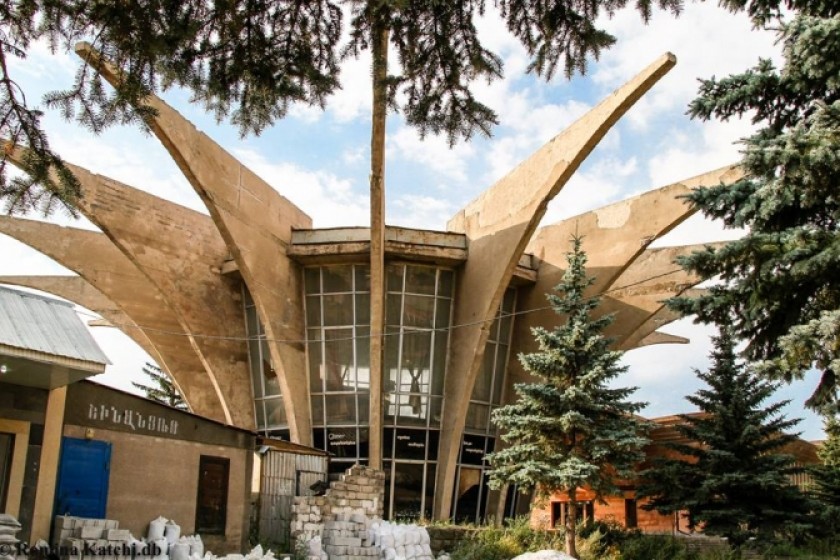 The Hrazdan bus station, built in 1971, is shown in the top photo. It’s a privatized building now, abandoned and damaged. Built by architect Henrik Arakelyan with futuristic elements, this building is one of the hundreds that are neglected by the public and relevant structures.

For seven years, architecture theorist  Yeva Sargsyan strove to make a database of Armenian architecture, which would present a detailed classification of buildings, urban elements and small architectural forms, including information about the author, location, construction site and other architectural parameters.

The main information of the encyclopedia is presented with different classification parameters. Each parameter is a separate page. Thus, using a single parameter, you can find the buildings with those elements, and other information.

I talked to project manager Yeva Sargsyan about the idea of ​​creating the online encyclopedia of architecture, ArmArch, the working process and upcoming developments.

How was ArmArch (Encyclopedia of Modernist Armenian Architecture) created?

The idea of ​​creating a database was born in 2010 when I worked together with my two colleagues on ReArch Architectural Environment Research Center projects.

Over the last seven years, I dreamt of continuing this work and always looked for opportunities and supporters to implement it. Finally, with the help of ARISC, Talinn Grigor and Romina Der-Bedrossian, we could start.

The structure of the encyclopedia, which you see now, is the result of the continuous and very interesting creative work of eight months. At first, we aimed to create just an architectural library or database where each object would be categorized by clear documentary data (architect, date of construction, etc.). The most important thing was having the opportunity to group objects by parameters, as it would allow us to get a statistical picture of the studied architecture, which, in its turn, would serve as a basis for the analytical work and seeing the patterns.

However, when filling in the database and writing parameters of objects, classification patterns came out, which turned this idea into an analytical research. Thus, the idea to turn the database into an encyclopedia was born, as there were many commentary and analytical texts.

We call it an analytical encyclopedia, as the main emphasis was placed on the interpretation and analysis of the documentary information.

In July-August, we toured Tavoush, Lori and Aragatzotn provinces and thoroughly collected, photographed and studied the local architecture built after the 1960s.

The Armenian Encyclopedia of Modern Architecture is one of the ArmArch projects, which is based on multi-disciplinary research.

There are many tags on the website, especially under the section of featured elements. Why?

The whole meaning of the encyclopedia is the system of tags that we call parameterization. There, you should see the difference between the data type (type of data) and its value or feature.

Data type is a category of attributes such as "architect", "object type", "construction date" or the same "featured elements". They do not contain information, but they give an opportunity to understand what kind of parameterization we deal with in general. The main information is the data itself - the specific architect, date, specific construction technique, featured element and so on.

If it was a classic text encyclopedia, this brief, infographic-based parameterization system would have a lengthy text structure.

The encyclopedia includes buildings that are neglected or have no other sources of information about them. I found buildings unknown to me, such as the Dilijan Beethoven Concert Hall, Ashtarak Trade Center, Hrazdan Bus Station. Are there such buildings included in the encyclopedia, that were unknown to you, too?

Well, the Beethoven Concert Hall is part of the Composers' House complex. Yes, there were, many. Our trip to the provinces was like adventure hunters seeking treasure in a city that’s lost in the jungle. We travelled by car through all the streets and yards in towns to find buildings of interest.

Of course, we had a preliminary list of buildings in every town, but the meaning of the tour was to find new ones. We often discovered buildings on some side streets. Sometimes we intuitively knew that seemingly uninteresting building in the distance could be an important discovery. We went there, through winding streets, climbing the slopes of the mountains, not seeing it from time to time, and looking forward to reaching it to understand whether we found a treasure or something ordinary. And, most often, our intuition did not deceive us.

For example, that was the case with the Hrazdan Culture House, which is on the outskirts of the city, on the hill away from the street, and, naturally, the building’s interesting volumes and frontal design aren’t apparent from afar. Or, often, when we were driving from one town to another by car, we saw some building on the road and had to come back.

Many of the buildings we discovered were new to us and even to our colleagues. Only a few architects are even able to remember the names of those who designed certain buildings. We often can’t locate the architects. And the non-professional community is not familiar with those buildings at all, or, living under their shadows, does not realize their significance. Most of them have never been photographed or documented as important buildings. 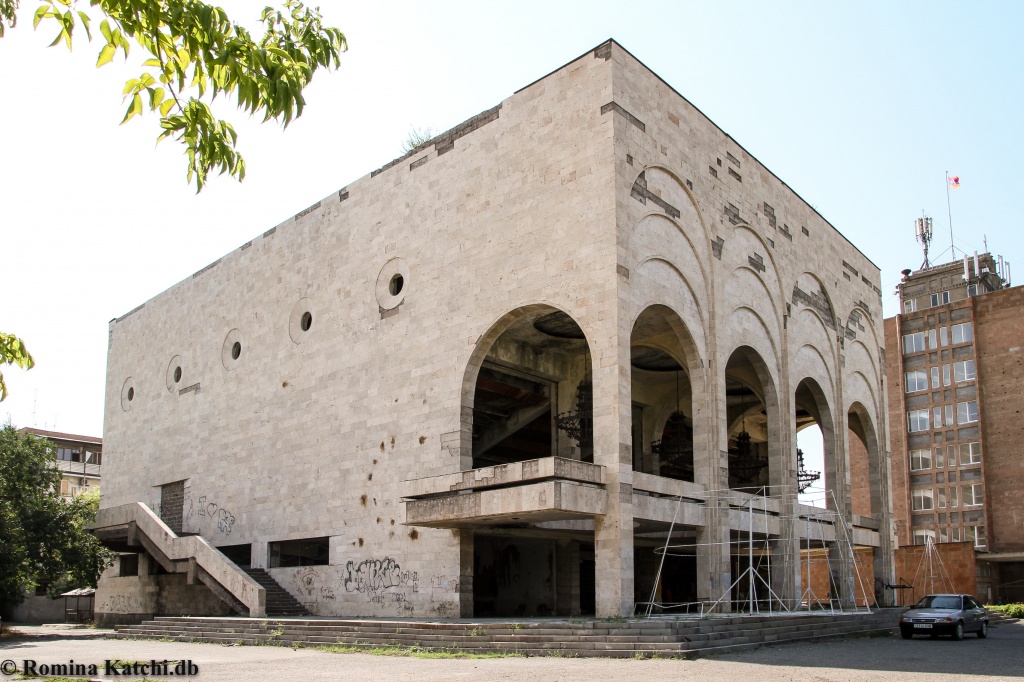 Can you highlight the types of buildings that are particularly in need of attention and aren’t appreciated culturally or architecturally?

The Soviet-era "household buildings" were a revelation for us. They existed in almost every city. They aren’t exposed to style or compositional patterns, but studies of the plans will reveal some patterns (they are likely to be typology-based layouts) that will help to better understand the functions of those buildings and their architectural solutions.

The “houses of culture”, that were subjected to style patterns as they served political, propaganda goals, are also interesting.

In general, there are interesting and ordinary structures in every architectural type. It is impossible to say that there is a type which is of particular interest. Of course, it’s more likely for all museum buildings to have their own, specially designed and exciting architecture, while the buildings of schools or kindergartens are typically unattractive.

Are there architectural structures that need special research and can be characterized by being unique?

Almost every building has an interesting story of creation. We are particularly interested in the stories that explain the architectural structure of a building - why it was built so, what it “tells, conveys or imposes” with its structure.

However, in terms of architecture, there are few buildings that can be classified as unique and important architectural concepts in the local or global architecture. 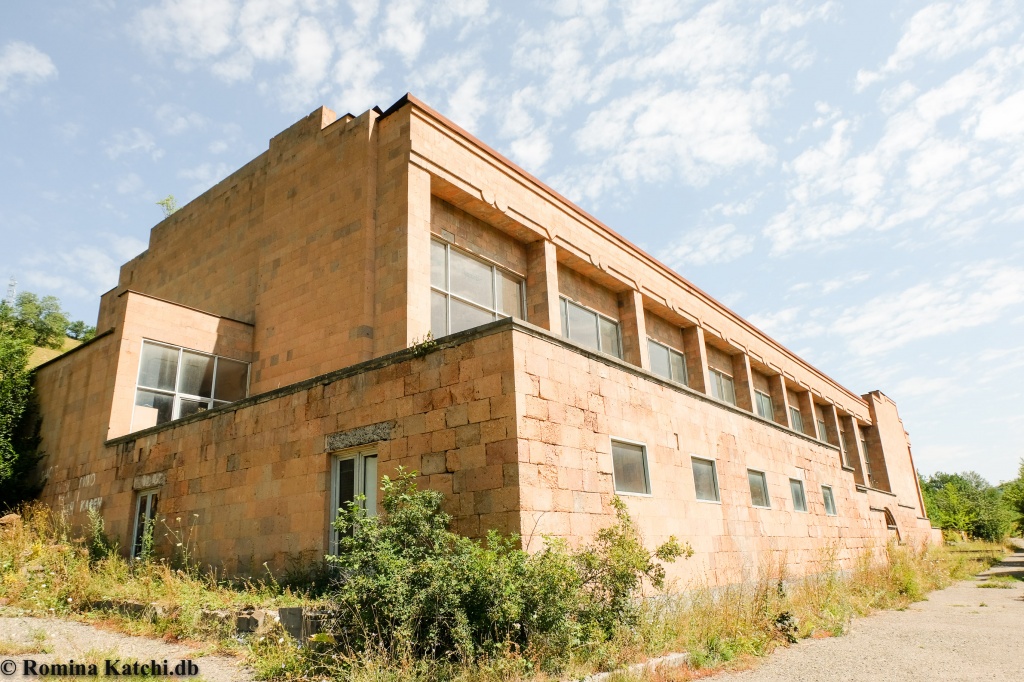 For me, every building is an architectural gem, even if it’s an example of a transitional, eclectic and weakly erected building that illustrates the search of the architect and the solution that the author had tried to find. Buildings with naive architecture evidently show the problems faced by the architect, his concerns and creative thinking.

I would like to emphasize the former VDNKh complex (the All-Union Exhibition of Achievements of National Economy) in a southern suburb of Yerevan, which, like most of the buildings we have studied, is currently unused, unknown and gradually declining.

Architect Sargis Gourzadyan, for example, is not so well-known, though he’s created some beautiful buildings. In general, we know the names of only few architects, but there are many that had very specific signature and left important buildings.

Will the encyclopedic content be expanded? Will the user be able to participate in that process and, if yes, how?

We’ve “written” only one page out of a few volumes of the encyclopedia. We have a huge archive and materials that should still be posted. This is a routine work, and we will systematically do it within the coming months and years. Any encyclopedia requires years of work to reach a certain level of integrity.

The ultimate goal of the encyclopedia is to become a Wikipedia-like project, where anyone can contribute. At this point, it’s mentioned that it’s possible to contribute by sending us an email.

Finally, as a theoretic and critic of architecture and a professional journalist in this sphere, what do you think are the most urgent issues facing Armenian architecture today?

I wish the Armenian architecture school could regain its professionalism. I wish it could spur the construction market, the technical and technological skills and capabilities that would result in having architectural quality and structural diversity.

My hope is that Armenian architecture frees itself from the shadow of badly digested and mechanically repeated structures of the past or international architectural experience, that it looks at its present-day situation, its inner reality and aesthetics, and, guided by the time, place, situation and problems of the area, comes up with a unique architecture school of the 21st century, as it always used to do, even in case of the impersonal, homogeneous international style or modernism.