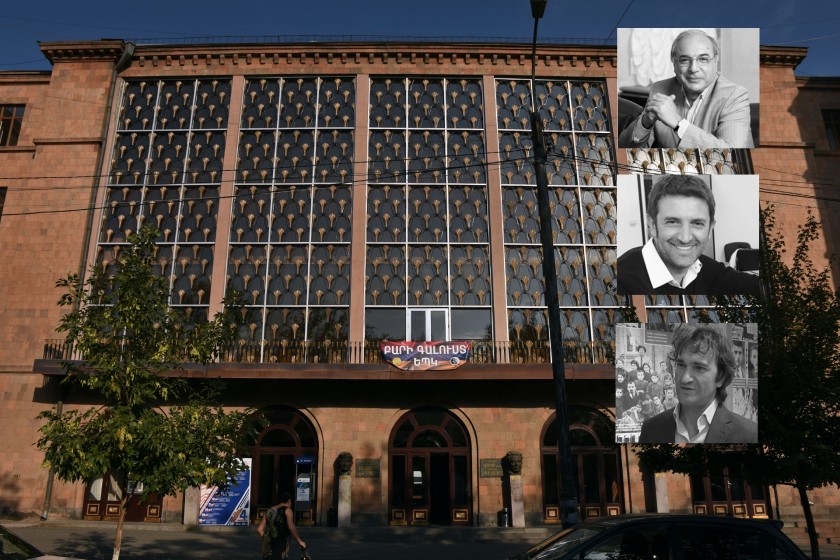 The Smbatyan Family’s Cultural Empire: Suspect Collaboration with a Swiss Foundation and a Vienna Conservatory

Violins crafted by Antonio Stradivarius, Nicolò Gagliano, and other old-world masters were to be displayed and sold in Yerevan at an exhibition jointly organized by the Aram Khachaturian-Competition Cultural Foundation and the Del Gesu Foundation. The exhibition was a part of the 11th Aram Khachaturian International Competition.

Violinist Robert Dumitrescu, whom the Khachaturian-Competition Foundation presented as the director of Del Gesu, flew to Yerevan to show the instruments and award a violin made by Jean-Baptiste Vuillaume to the winner of the Aram Khachaturian Competition. The winner would be allowed to play the violin for one year.  (Similar violins fetch upwards of 200,000 Euros at international auctions).

According to Aram Khachaturian-Competition Foundation Executive Director Anna Ter-Hovakimyan, the collaboration was to have continued. Recently, however, she wrote Hetq that they collaborated just for the one event, based on the proposal made by Del Gesu.

We were unable to find anything on the well-known Swiss Del Gesu Foundation. It’s not registered in any country’s company or commercial register, and its internet link leads to an empty page. We couldn’t find any information on the web about this private foundation that owns so many valuable instruments.

An internet search revealed that the foundation operated in Switzerland and Lichtenstein, and that the website, registered in 2008, was mostly blank.

In an interview given a few months ago, however, Robert Dumitrescu announced that he wasn’t the Del Gesu Foundation Director, and was only collaborating with the foundation for the Aram Khachaturian Competition event.

Dumitrescu, it turned out, wasn’t impressed at all with Del Gesu or the Aram Khachaturian Foundation. He even went so far as to say that Iva Miletic, whom he awarded the Vuillaume violin as the competition’s first-prize winner, didn’t deserve to win.

So, what exactly is the Del Gesu Foundation, and why is it so secretive? Another question to be asked is why those originally associated with it, then disavowed those links?

In response to our inquiry as to which organization imported the violins, exhibited and sold in Armenia, Armenia’s State Revenue Commission (SRC) stated: “Armenia’s SRC does not possess information regarding the importation, sale and insuring of violins involved in the June 2015 Aram Khachaturian Competition in Yerevan organized by the Del Gesu Foundation.” This signifies that these expensive violins were imported  to Armenia vis an “unknown” route.

Our research shows that Dumitrescu in fact did show up as the director of Del Gesu, and, in that capacity, did bring two Del Gesu Foundation violins to Moscow in February 2015. One was crafted by the Carlo Landolfi in 1768, and the other by Vincenzo Postiglione in 1886. The first has been valued at 250,000 Euros, the second at 100,000 Euros. The violins, ostensibly to be sold, were handed over to Mikhail Bereznitsky, Del Gesu’s representative in Russia and a former professor at the Moscow Tchaikovsky Conservatory. Bereznitsky was to give the violins to the intermediaries of potential buyers.

Bereznitsky later announced that the violins had been stolen.Russia’s Prosecutor’s Office dropped the theft case, claiming that the identity of the thief hadn’t been ascertained.

An expert at the Moskovskij Komsomolets newspaper found that the strangest aspect of this story were the careless and reckless actions of Del Gesu that not only contradicted the principles of Swiss legal culture, but also the basic insurance demands. The expert found the idea of an intermediary in this story as suspect and pointless. (For details in Russian - http://www.mk.ru/culture/2015/11/19/v-moskve-propali-dva-unikalnykh-strunnykh-instrumenta.html)

Equally suspect is the fact that after the alleged theft of the violins, Del Gesu was renamed the Guarneri Foundation. We attempted to uncover the reason for the name change and where the new foundation had been registered and by whom.

It turns out that Mikhail Bereznitsky publicly appears as associated with the Guarneri Foundation, but it’s not listed in any company registry. Furthermore, Robert Dumitrescu is the director of Guarneri Society GmbH, registered at Hӧhenweg 7, 9000 in the Swiss city of Saint-Gallen.

Dumitrescu has disavowed any connection with the Guarneri Foundation. Bereznitsky refused to be interviewed by journalists on the matter.

Our inquiries about insurance company that handled the violins allegedly stolen in Moscow, and those brought to Yerevan, have gone unanswered by Bereznitski and Dumitresku.

Thus, to replace the Del Gesu Foundation, Dumitrescu and Bereznitsky, its representatives, founded two separate but similar sounding organizations – both named Guarneri and both dealing in the buying, selling and appraising of musical instruments - for their personal gain.

Each attempt to solve the mystery led us back to the Aram Khachaturian-Competition Cultural Foundation, which refused to provide Hetq with a copy of the contract it struck with Del Gesu, arguing it was confidential.

One can only wonder why and how the Khachaturian Foundation signed a contract with another foundation that doesn’t exist and with its on-again, off-again director. 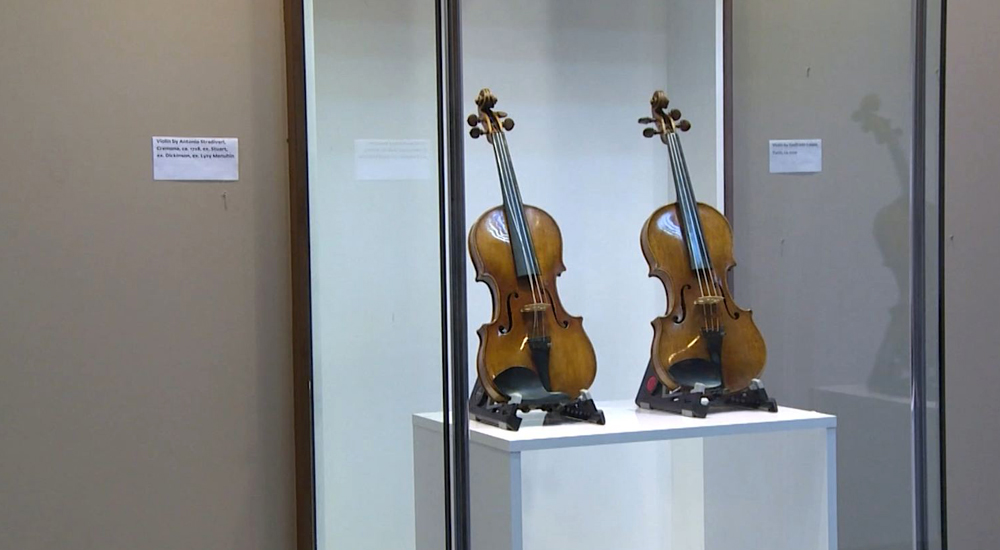 Two of the violins exhibited in Yerevan. Photo: Public TV of Armenia coverage

And why is that among all the world class competitions, Del Gesu chose to award a violin to the winner of the much-maligned Aram Khachaturian Competition?

The answers to the above are perhaps hidden in the response that an unprepared staffer at the Khachaturian Foundation gave to Hetq’s Austrian colleagues from Dossier when they called, inquiring about its collaboration with Del Gesu.

The staffer responded that the Del Gesu Foundation "has an office here", and that she must consult with Sergey Smbatyan before answering any related questions. The staffer added that Smbatyan would get back to our Austrian colleagues.

We should note that Sergey Smbatyan is not listed as a de jure member of the Khachaturian Foundation’s management or staff. Needless to say, we received no reply from said foundation.

Del Gesu Foundation is not listed in Armenia’s company registry.

1A Sayat-Nova Street is the address of the Yerevan State Conservatory, where the Aram Khachaturian-Cultural Competition Foundation, Armenia’s State Youth Orchestra, and Sergey Smbatyan’s Support to Classical Music NGO are also located. 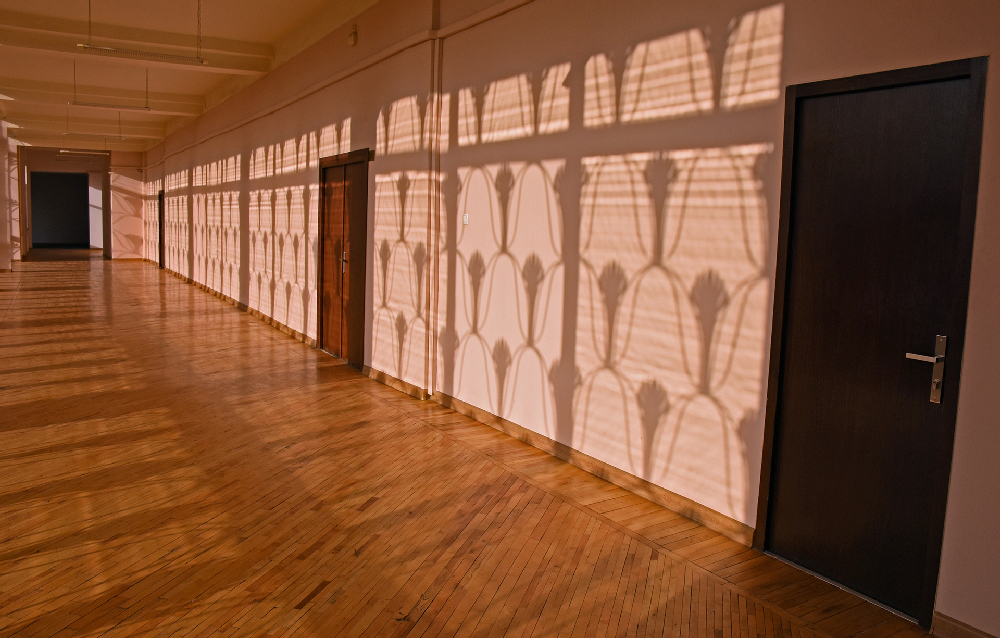 This foundation is the personal venture of the Smbatyan family. Armen Smbatyan is an advisor to the Armenian president, and created the foundation and serves as its board’s president.

The Foundation’s official orchestra is the State Youth Orchestra of Armenia, and Sergey Smbatyan, his son, is its artistic director and principal conductor. Anna Ter-Hovakimyan, executive director of the Khachaturian Foundation, also serves as the general director of the State Youth Orchestra. Anna Ter-Hovakimyan, who has collaborated with the Smbatyan family for years, is the wife of Shahen Shahinyan, current rector of the Yerevan State Conservatory and Aram Khachaturian-Cultural Competition Foundation board member.

Vardanyan was also implicated in the case of seizing a plot of land adjacent to Yerevan’s Tchaikovsky Music School.

We should remind readers that for some thirty years Armen Smbatyan’s mother, the late Tatyana Hayrapetyan, was the de jure head of the Tchaikovsky Music School. In practical terms, however, Armen Smbatyan controls it.