The Environmental Disaster in Teghut No Longer Possible to Cover Up: Denmark Pulls Out From the mine

Yet one more positive outcome of the consistent efforts of

On October 16, 2017 Denmark’s Export Credit (EKF) agency, a state body in charge of promoting Danish exports, published an official statement on their website stating that EKF, together with the private pension fund PensionDenmark, withdraws its 62 million USD worth credit from the exploitation of copper-molybdenum mine in Teghut. The credit was provided to Vallex group through Russian VTB bank back in 2013. The pension fund had provided the credit on the condition that it would be used for purchasing mining equipment from Danish FLSmidth company. EKF was involved in the agreement as a guarantor, i.e. it would cover PensionDanmark's loss if the VTB bank would not be able to pay the loan back to PensionDanmark. Back in the day, the pension fund had justified its decision of giving the credit with the motivation of “investing in a project with a profitability higher than bonds.” Later, in 2016, the President of Armenia Serj Sargsyan awarded Thomas Shultz, the executive director of FLSmidth, with a Medal of Gratitude “for his contribution to the development of mining in Armenia and for productive cooperation.”

EKF mentions in its official statement that the reason for canceling the loan agreement is, despite numerous warnings, Vallex’s failure to improve the environmental and social situation. "The decision is the culmination of a longer course, where we repeatedly sharpened the tone over the past few years. Before the summer vacation we took the first step towards a possible exit with a written warning to the mine that we would pull out if the mine didn’t meet our requirements. The warning was recently followed by an ultimatum, which ended with a message to the mine that we are pulling our funding out of the project," says EKF CEO Anette Eberhard. The loan will now be repaid by VTB without loss for Pension Denmark and EKF.

The decision of the Danish private pension fund and the state agency acting as guarantee was published on the same day when “Ekstra Bladet” newspaper published Jens Malling’s investigation of the resent situation at the mine and the Danish investments. The article is based on a series of 6 articles published in August in a local Danish newspaper with a much smaller viewership. The journalist started his investigation back in 2016 and posed quite specific questions to respective Danish institutions. We will return to the investigation published in Denmark, as well as its comments and public resonance in the near future. In response to “Ekstra Bladet”’s question whether the agency takes responsibility for the damage already caused to the community and the environment, CEO Anette Eberhard replies: “It is important to remember that the mine was already a reality, with or without our participation. However, funding for FLSmidth's equipment gave us an opportunity to make demands for the mine that would otherwise not be posed and it has undoubtedly pushed things in a positive direction. Unfortunately, we reached a point where, despite all our attempts, the mine did not meet the requirements we set aside as a condition for joining.” 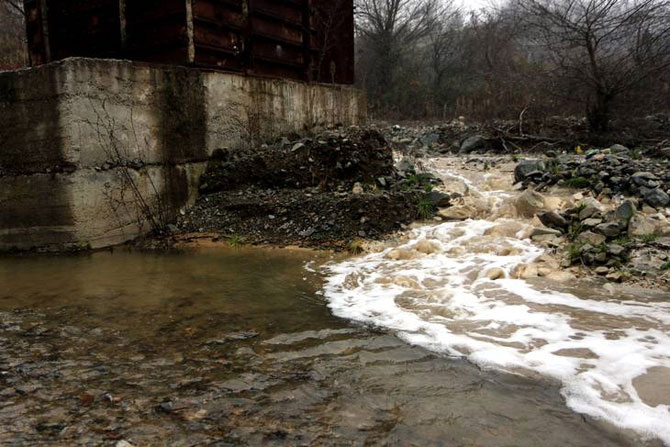 Jens Malling’s article provides a detailed description of not only environmental problems related to the mine, but also legal problems, violations of the rights of the local community, as well as problems at Alaverdi copper smelter run by the same company (Vallex). Malling’s photos clearly capture the pollution of Shnogh river from the waste water of the Teghut tailing damp. The assessments which claim that the Teghut tailing damp is not a seismically stable construction and that, generally, it does not correspond to construction standards of tailing damps are based on the research and findings of a World Bank contracted Swedish geological firm.

In its statement about stopping the loan for Teghut mine, EKF mentions these very problems - water pollution, problems connected with the tailing damp and poor working conditions at the Alaverdi copper smelter. “Ekstra Bladet” also published the words of Davit Tadevosyan, the public relations officer of Vallex, according to whom there have been a few instances when water from the tailing damp was discharged, “but which did not cause pollution of the river in any way.” As for the seismic stability of the tailing damp, Tadevosyan says: “When it is finished, it will become the highest tailing damp in the world and it is continuously monitored by engineers. I do not know what the World Bank's report is based on.”

Although EKF claims that their funding decision in 2013 was based on consultations with different stakeholders, including the civil society representatives, they fail to report their lack of accountability to Save Teghut civic initiative’s detailed letter filed to them yet in 2013, as well as the large number of concerns voiced during face-to-face meetings, their negligence of the petition issued by the residents of Teghut and Shnogh communities to EKF and Pension Denmark. Moreover, different active groups and individuals have been voicing about a huge number of violations and ecological issues in the mine. They have also sent numerous petitions to different human rights organisations in Denmark and have provided evidence for journalist investigation in Armenia.

Back in 2014, in its investigative article “Teghout: A Contentious Danish Investment in Armenia”, CivilNet quotes the deputy director of EKF, “[we ensure] a good selling point for Danish exporters negotiating contracts abroad. If they are able to offer a competitive loan and reliable product, there is every chance of making a sale.” The conclusion to follow was: “It then matters little that the Teghut mine has come under severe criticism in Armenia and in the Diaspora alike for the environmental and social dangers it poses.”

Denmark’s withdrawal from the mining project with such a harsh tone may lead to several consequences; one possibility is that the mining company will go bankrupt, a highly desirable precondition to start the process of closing the Teghut mine as soon as possible, to restore the landscape as much as possible, to shut down the leaking tailing damp and liquidate its dangers, to gradually recover the ecosystem, as well as to restore agricultural and other economic activities of the local population in the not-yet-contaminated areas. Therefore, the residents of the communities should be ready to the vision of restoring their livelihoods for which they will need unity more than ever.

Another factor that plays a crucial role in this decision is that Vallex’s attempts of covering up the real situation in Armenia and presenting “excellent” reports to donors and creditors eventually failed. Public pressure and calls for responsibility from within Armenia and in Denmark finally lead to the Danish state agency and lending fund to react and prevent their reputation from further falling, because the investigative articles were being republished and could potentially lead to a strong public outcry in Denmark and elsewhere. In essence, this decision reflects the outcome of the consistent and long-term efforts of citizens who had huge concerns about mining in Teghut.

This news also comes to prove that mining companies continuously quoting international standards are outright swindlers - a statement made both about Vallex and currently about other companies, too. Long before starting the mine, environmentalists and scientists had been warning against serious risks which should have acted as valid enough reasons for disapproving the mining project altogether. In the end, all of these risks have now come true and have substantially harmed the nature, people and the economy.