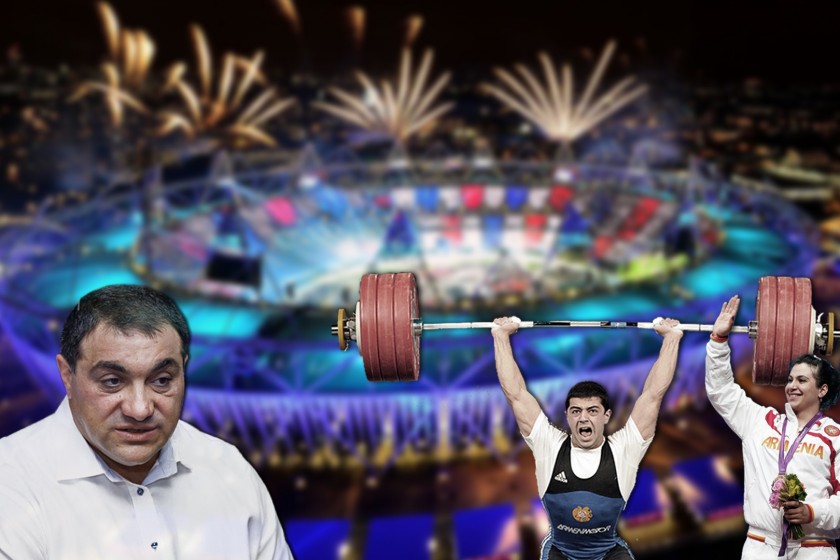 Armenia’s Weightlifters: Ups and Downs of the Doping Saga

Times are tough for Armenia’s weightlifters.

The national team won’t be competing in the European Senior Weightlifting Championship beginning March 26 in Romania.

Armenia and eight other International Weightlifting Federation (IWF) member federations were slapped with one-year suspensions after the teams had three or more tests that showed illegal drug use by athletes. The violations were found after the retesting of samples taken during the Olympics in Beijing in 2008 and in London in 2012.

Those suspensions took effect on October 20, 2017. Some officials believe Armenia’s suspension will probably be lifted this April.

The other suspended member federations are Russia (10 positive tests), Kazakhstan (10), Belarus (7), Azerbaijan (5), and China, Ukraine, Moldova and Turkey (3 each).

More damaging evidence of Russian doping was revealed in the 2016 WADA investigation prepared by Richard McLaren, leading to Russia being banned from competing under its own flag at this year’s Winter Olympics in South Korea.

The lifetime bans for 28 athletes were overturned in the Court of Arbitration for Sport (CAS). Another 11 had bans reduced to only the 2018 Games. The CAS decided that the testimony and documentation provided by Grigory Rodchenkov, former director of Russia’s national Anti-Doping Center, didn't prove the athletes were guilty of using banned performance-enhancing substances.

Russia then asked the International Olympic Committee (IOC) to allow 15 athletes to compete in the 2018 Winter Olympics who had previously been banned by the CAS. The IOC declined that request.

Earlier, the IOC and WADA had presented an overview of how test results from the WADA-accredited Moscow Laboratory and RUSADA had been manipulated. Rodchenkov was featured in the 2017 Netflix documentary Icarus, and also gave details to The New York Times  .

Russia has officially denied financing any state-sponsored doping program. Russian President Vladimir Putin has described Rodchenkov as “a man with a scandalous reputation” who can’t be trusted.

What does all this have to do with Armenia?

It turns out that other post-Soviet countries, including Armenia, also used the WADA-accredited Moscow Laboratory. The laboratory was suspended by WADA in November 2015.

Why did Armenia Collaborate with Rodchenkov?

ARMNADO (Anti-Doping Agency of Armenia) began operations in 2009, with WADA certification. ARMNADO collects and ships urine samples taken from athletes. Prior to 2009, no data is available regarding how many doping tests were conducted and with what laboratories.

ARMNADO operates out of the building housing the Ministry of Sports and Youth Affairs. Armenia’s National Olympics Committee and the country's Weightlifting Federation are located in the same building.

According to the WADA International Standard for Testing and Investigations (Article 5.2), ARMNADO must conduct testing without giving prior notice to officials, coaches or athletes.

ARMNADO director Areg Hovhannisyan told Hetq that in the early years they didn’t have the funds to conduct their own testing. “The government doesn’t take the matter seriously," he said. "They should give us enough money so that we can decide who to test and when."

Hovhannisyan says the weightlifting federation would contact ARMNADO by mail, requesting testing and specifying who should be tested.

Data going back to 2011 reveals that no Armenian weightlifter tested positive for doping as a result of any ARMNADO tests ordered from the Weightlifting Federation, or from the Armenia Olympic Committee starting in 2012.

The laboratories selected by ARMNADO to test the samples send the results to both ARMNADO and to WADA. Until 2014, ARMNADO used the WADA-accredited Moscow Laboratory headed by Rodchenkov.  All data is now stored in the Anti-Doping Administration & Management System (ADAMS) – a web-based database managed by WADA.

ARMNADO would also send samples to other laboratories, including Austria, as it does today. But for weightlifters, the samples were usually sent to Moscow.

ARMNADO stopped sending samples to Moscow in 2014. Since 2014, no Armenian weightlifter has tested positive.

The names of 20 sanctioned Armenian weightlifters appears on the International Weightlifting Federation’s (IWF) website. Three other cases were revealed as a result of IOC retesting. 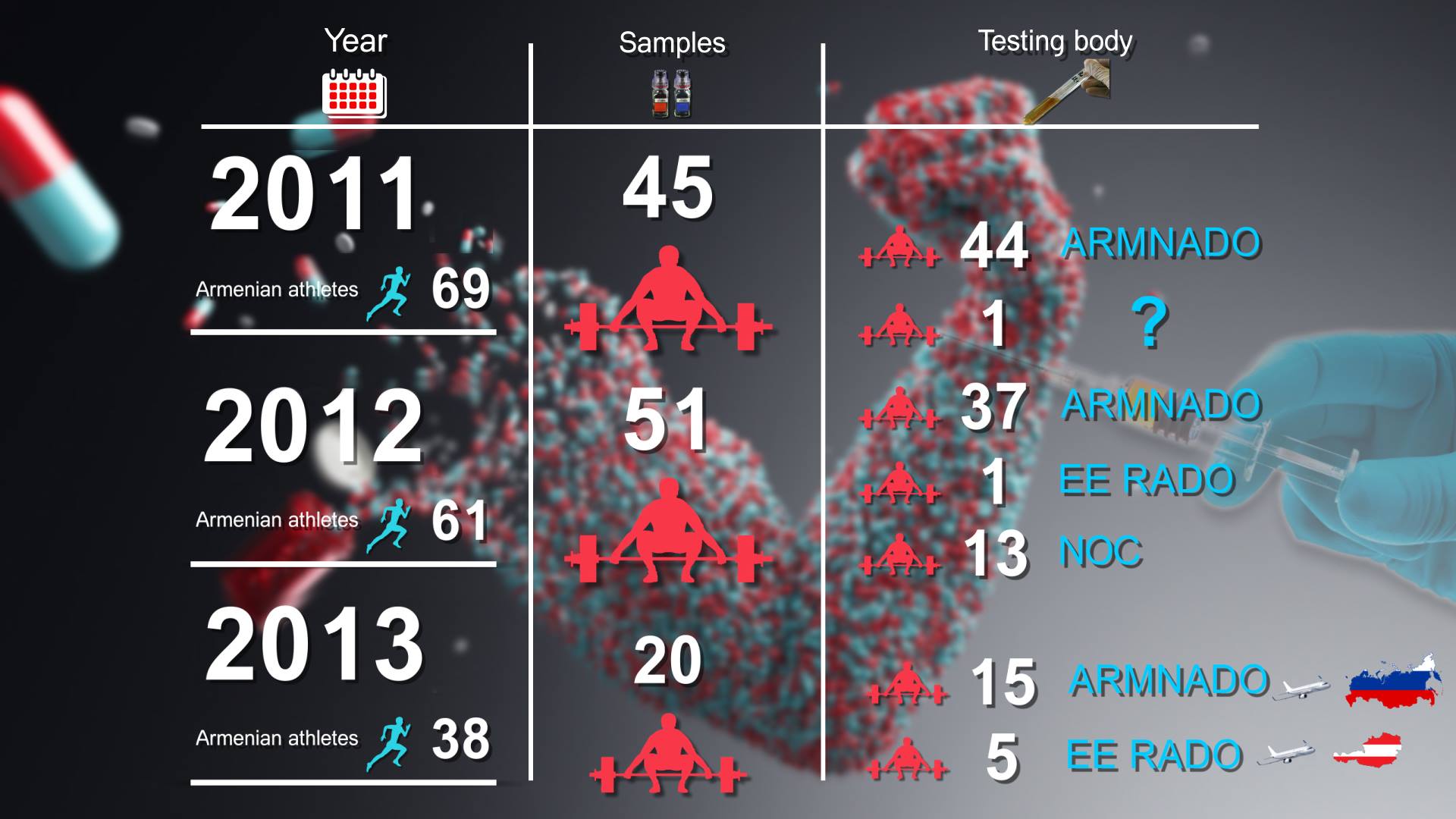 Armenian Weightlifters Explain Why They Were Doping

Winning medals at the 2008 and 2012 Olympic Games was so important for Armenia that the country’s weightlifting federation launched a doping program.

In conversations with Hetq, several Armenian weightlifters confessed to using performance enhancers. Some only talked anonymously. Athletes told Hetq they either purchased the drugs themselves or that the federation provided the drugs free of charge.

Athletes were advised on what date they should stop taking the drugs so they wouldn't get caught. They underwent mandatory testing before competitions, so the federation could be certain no one would be caught.

Aghasi Aghasyan, a former weightlifting team member, explains: “We’d send our samples before the matches. If they saw, for example, that my sample was clean, I’d be sent to compete. If another weightlifter wasn’t clean, he wouldn’t go. Everything was being done so that no one was caught. I can’t say for certain who sent the test results, but the federation was working to see that no one got caught.”

Tigran V. Martirosyan (no relation to Tigran G.) had a 2008 Olympic bronze medal upgraded to a silver medal because of the disqualification of a Belarus athlete. Tigran V. confirms that he gave urine samples before every major competition. “They took the samples before competitions, so they could tell if we were clean or not.”

One athlete who asked not to be named said the weightlifting federation even announced the cost of sample testing:

“They told us that it cost 120 euro to analyze each sample at the Moscow facility. They told us we’d have to pay if a second test was needed. If the first sample turned out dirty, a second sample was sent. Many were tested twice, to ensure they were clean.”

Some Athletes Were Told to Buy Drugs, Other Were Offered Them for Free

One athlete told Hetq:: “They would get performance enhancers at a low cost from Ukraine and sell them here. They weren’t sold to the national team, but given free. The drugs weren’t expensive; 100 for 20,000 dram (about $42).”

“In my case, I didn’t have the money to buy vitamins. But I had 1,000 dram (about $2) to buy the enhancers. It was cheap and sold in drugstores. I was a kid. I bought and used it,” says former team member Aghasyan.

2012 Olympic bronze medalist Khurshudyan, said in an interview with the Armenian news agency Mediamax: “We didn’t use any drug, even vitamins, without the permission of the doctors. But if they tell the athlete that the body can clean itself (of these drugs) in 10 days, we believe it.”

One athlete says that refrigerated dope-free samples were sent for international testing. Another method was used to appear “clean”.

“When official testers from overseas would visit, we’d more or less know which day our urine would have to be clean so we could pass one test. This continued until the London Olympics,” this athlete said.

ARMNADO director Areg Hovhannisyan confirms this. “The doping testers would call in advance. The athletes would hand over old samples. This was a well-known practice.”

Such tests were conducted in violation of WADA procedure – the testers didn’t bother to monitor the process.

ARMNADO director Hovhannisyan says the samples were sent to Grigory Rodchenkov in Moscow. “They sent it, with the cash, to Grisha.”

It’s unclear which laboratory was used for Armenian athletes prior to 2011. But Armenia’s collaboration with the Moscow laboratory since 2011 is confirmed in the Annual Operations Report of RUSADA (the Russian Anti-Doping Agency).

Georgia Anti-Doping Agency (GADA) head Pavle Kasradze believes the problem was that the Armenian Anti-Doping Agency does not operate independently. Kasradze says it was well-known that “if one wanted to falsify the results, you’d have to go to Rodchenkov.”

Kasradze says Georgia tried to work with the Moscow laboratory once, but the samples sat at customs for weeks.

The Eastern European Regional Anti-Doping Organization (EE RADO) is based in Tbilisi.  Both EE RADO and ARMNADO conducted doping tests in Armenia, with ARMNADO doing most of the weightlifter tests and then sending them to Moscow. EE RADO didn’t send its own team of testers to Armenia. Instead, the tests were carried out by an Armenian, Karen Stepanyan, who was licensed by EE RADO. Kasradze says this was a cost-saving measure.

Based on IOC retesting, all those Armenian athletes who tested positive for using performance enhancers should have tested positive during these frequently-conducted tests. But they didn’t. This graphic shows the frequency of 2012 doping tests and the number of those tested before every major international event.

According to Article 14.4 (Statistical Reporting) of the WADA World Anti-Doping Code: “Anti-Doping Organizations shall at least publish an annual report of their Doping Control activities, with a copy provided to WADA.”

In 2016, when it was announced that Armenian weightlifters had to return their medals, Weightlifting Federation of Armenia (WFA) general secretary and men’s national team head coach Pashik Alaverdyan stated at a press conference:

“Everyone was using those drugs. But 100-120 days before doping tests, you had to be clean. (IOC president) Thomas Bach came and said: ‘I have investigated and discovered that I can catch someone if they have used drugs in the previous 400 days’.”

Hetq contacted Alaverdyan to see just how much he knew about the doping program.

“I did not send test samples,” he said. "Nor did I know the results. I had nothing to do with it.  I can’t answer any question. I’ve been in charge for four years now, and no one has even had a bloody nose. Please write that I know nothing.”

The athletes who spoke to Hetq say Alaverdyan wasn’t involved in the sale or distribution of performance enhancers.

An athlete told Hetq: “The buying and selling of drugs began at the time of Samvel Khachatryan. Prior to competitions, some athletes were told to buy the drugs, and the federation supplied it to others. They didn't force you to use, but you had no choice. If you didn’t use, someone else would. And he/she would take your place on the team.”

Khachatryan resigned after the 2012 London Olympics. Reached by phone, he refused to comment. “I don’t want you to question me,” he said, and hung up.

Often heard in interviews and off-the record meetings was “this was the system; the way of doing things”. One athlete says that at the time, Turkey and most of the post-Soviet countries were using performance enhancers:

“All the athletes freely discussed who was taking what, and when they got clean.”

At a December 19, 2017 press conference, Alaverdyan announced that federation had been fined $50,000 by the IWF over the doping scandal.

In response to a Hetq inquiry as to whether the award money would be repaid or seized, the Ministry of Sport and Youth Affairs wrote:

“The money hasn’t been returned to the government coffers. There are no laws specifying deadlines on return or seizure of the awards.”

“Seventy-five medals have been withdrawn and most of them have been redistributed to the athletes who deserve them. Even if, for them, it is not the same feeling as receiving their medal in an Olympic venue just after the competition, it is a way to render justice to clean athletes.

Mindaugas Mizgaitis, a Greco-Roman wrestler from Lithuania, won an Olympic bronze medal in 2008. He has since been awarded a silver medal after the disqualification of Russian Khasan Baroyev in November 2016.

Mizgaitis told Hetq he was awarded the full amount of the award difference one month after Baroyev’s disqualification -- a car from the Lithuanian Olympic Committee and 30,000 euro from the national sports committee.

Back in Armenia, those sports officials blame neither themselves or the athletes for the doping schedule. They just claim all the guilt lies with the former management of the weightlifting federation.