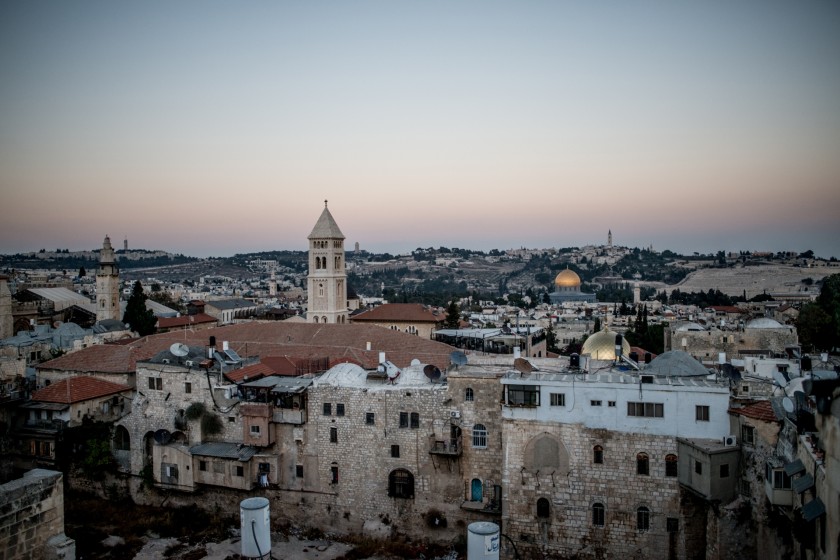 Armenians in the Holy Land

I stayed well into a night at the Church of the Holy Sepulchre in Jerusalem together with a friend. It was the Armenians’ turn to clean the tomb of Jesus. We watched the small groups clean the top of this tomb with care, refill the oil of lamps that burn over it. Priests did it with a certain habit, pilgrims did it with awe and tears. It looked like an incredibly special moment for these people to simply clean their part of the church, on this piece of land where it is believed that Jesus was crucified and buried.

A small nation with a large diaspora, Armenians share ownership of some of the most valued sites of Christian heritage in Jerusalem, Bethlehem and other locations in the area. Some of such sites are the Holy Sepulcher, St. James Cathedral, the Church of the Nativity, and the Tomb of St. Mary. Armenians are one of the Christian groups with the largest share, together with the Catholics, Orthodox Greeks, and the Coptic. An agreement of Status Quo, initiated by the Ottoman Empire in 1852, sustains the relationships and actions between these and more groups.

Armenians have lived in Jerusalem’s Armenian Quarter for centuries. Unlike many other places around the world, they did not come here only after the 1915 Genocide, they had lived here long before. According to several historical accounts, they began settling here in the 4th century after officially converting to Christianity. The Armenian Quarter occupies one sixth of the area of Old City Jerusalem.

The ownership of property connects to connections Armenian religious leaders have had with Jerusalem, as well as the travels of pilgrims that began even earlier than Armenia’s official proclamation of Christianity in 301.

“Bishop Macarius of Jerusalem, who presided over the discovery and construction of the Holy Places, was in communication with the head of the Armenian Church, Bishop Vertanness. One of the epistles, which he wrote to him between the years 325 and 335 A.D., deals with certain ecclesiastical questions and conveys greetings to the bishops, priests and people of Armenia. The intimate and warm tone of this important document shows a longstanding and friendly relationship,” writes Kevork Hintlian in his History of the Armenians in the Holy Land, which was printed by the Armenian Patriarchate in Jerusalem in 1989.

The Armenian community itself currently amounts to about 700-1000 in Jerusalem, according to various sources, and less in Bethlehem. There are concerns about the decreasing numbers of Armenians, because the community supports the Armenian Patriarchate, and the Patriarchate owns the Armenian Quarter. However, a continuing situation of restlessness in Jerusalem and a general feeling among Armenians that they are often not welcome as an ethnic group, even having lived in the Armenians Quarter for centuries, leaves many uncomfortable and becomes a reason for the community to decrease.

However, for pilgrims who come here from Armenia, the Holy sites in Jerusalem and Bethlehem connect only to the religion, with practically no communication with local Armenians, except priests, many of which are from Armenia as well.

With all the changes in the community, politics, architecture, the Holy Land remains of the same unchanging importance, and Christian pilgrims, including Armenians, will continue flooding the Holy Sepulcher and Nativity Church as long as they continue believing. 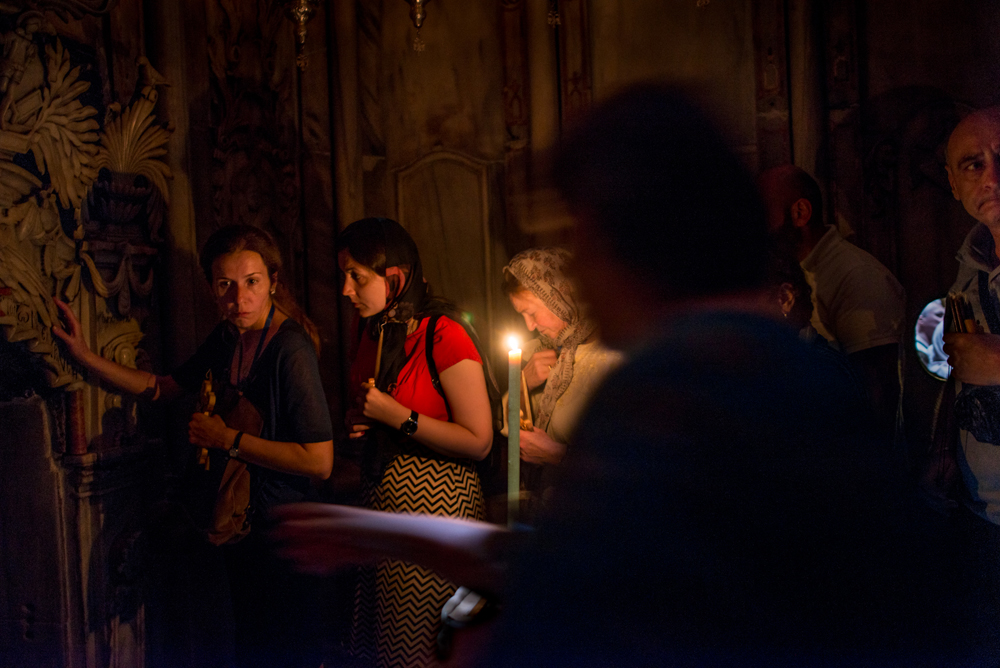 Pilgrims wait for their turn to see the tomb of Jesus Christ, in Holy Sepulchre Church, Jerusalem, Israel, on Oct. 20, 2017. Situated inside a structure called edicule, this ancient tomb is believed to be the burial site of Jesus Christ. 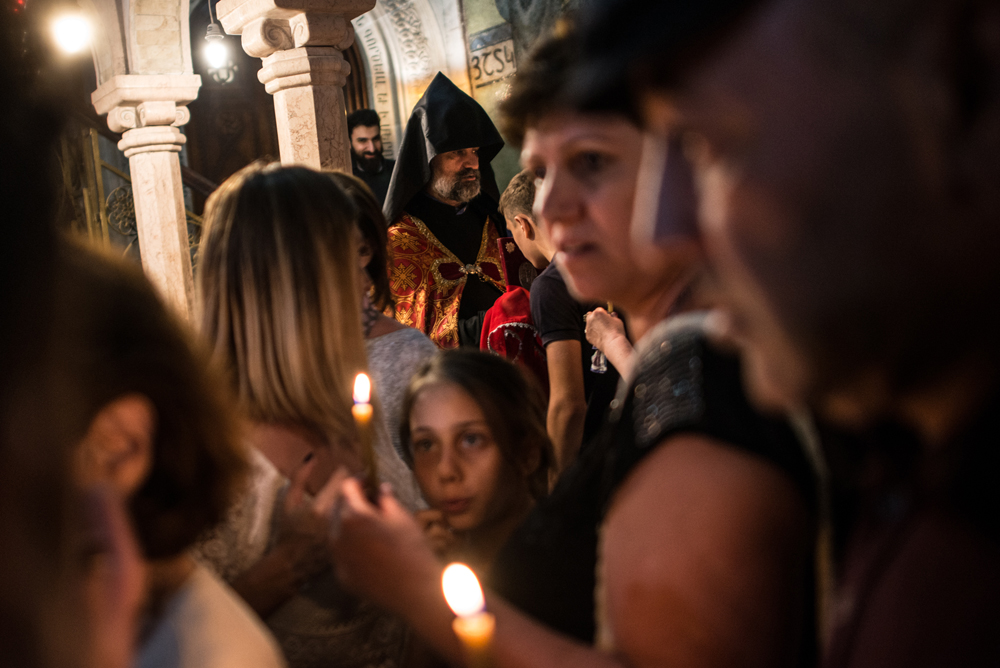 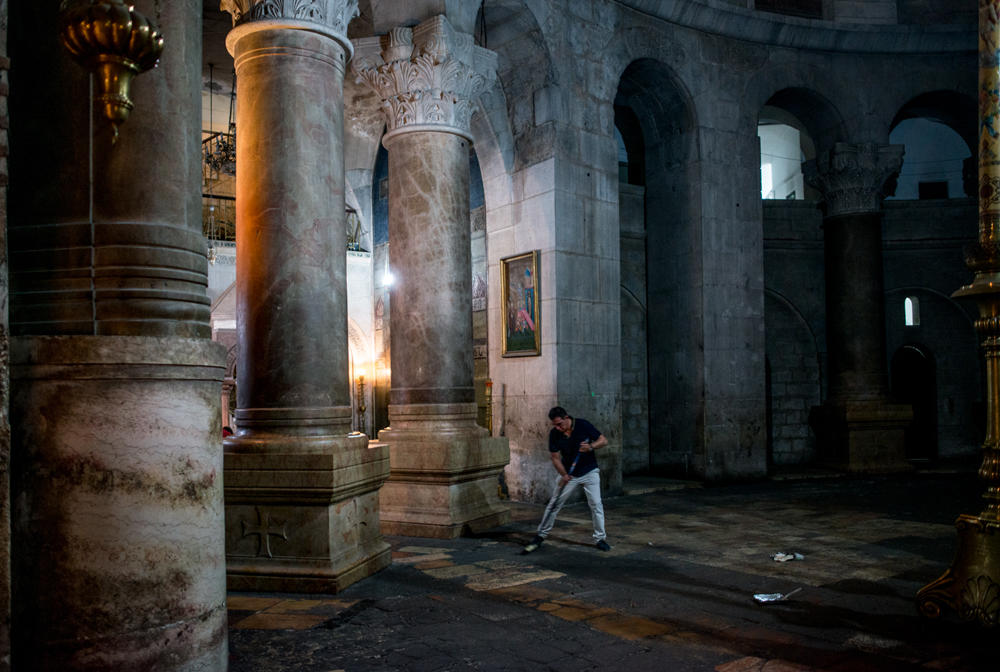 Armenian pilgrim sweeps the floor around the edicule that encloses what is believed to be the tomb of Jesus Christ, in the Holy Sepulchre Church in Jerusalem, Israel, on Oct. 20, 2017. 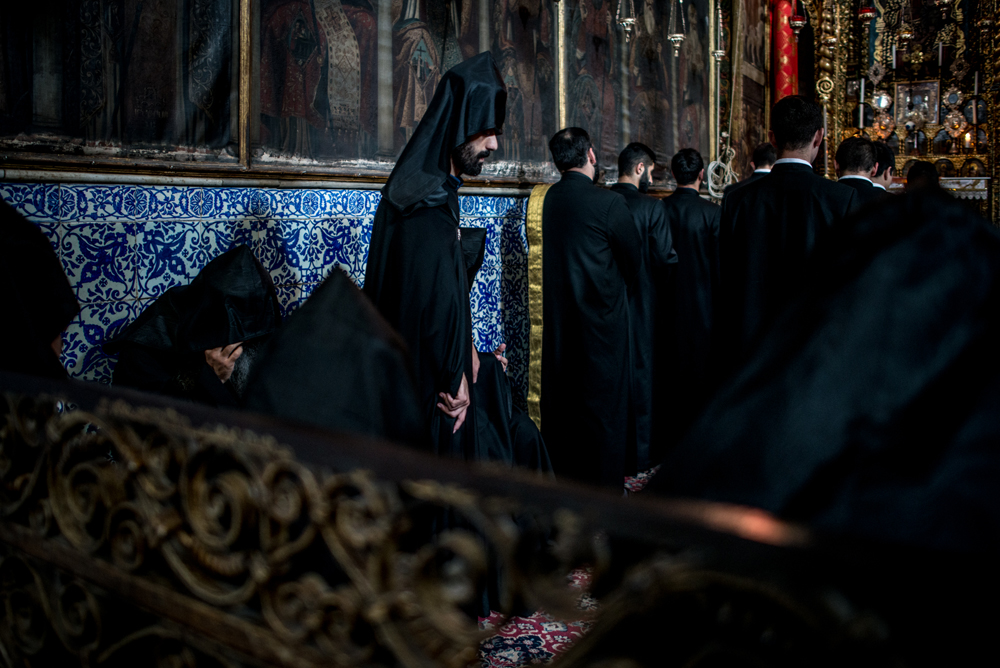 Armenian priests situate themselves next to the altar, during a daily church service in the Cathedral of Saint James in the Armenian Quarter, Jerusalem, Israel, on Oct. 21, 2017. 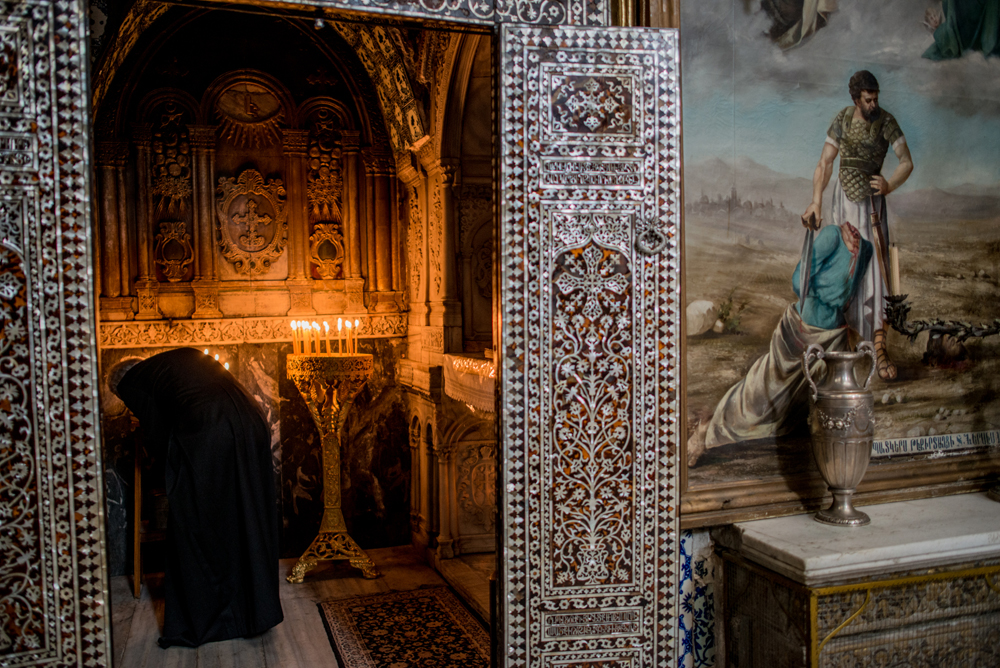 A priest maintains the chapel, inside which the head of St James the Great, one of Jesus Christ’s apostles, is believed to be buried, in the Cathedral of Saint James, Jerusalem, Israel, on Oct. 21, 2017. This cathedral is considered to be the principal church of the Armenian Patriarchate of Jerusalem. 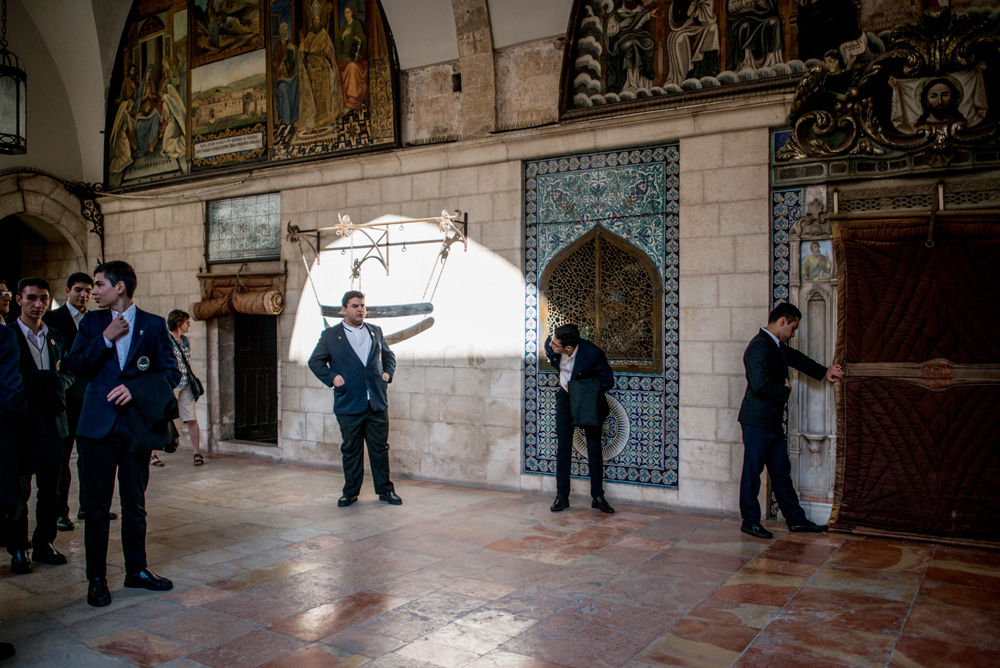 Students of the Theological Seminary of the Armenian Patriarchate of Jerusalem wait outside the Cathedral of Saint James, in Jerusalem, Israel, on Oct. 21, 2017. The Seminary marks its 175th anniversary in 2018 and currently holds 21 students, awaiting 18 more in the coming days. 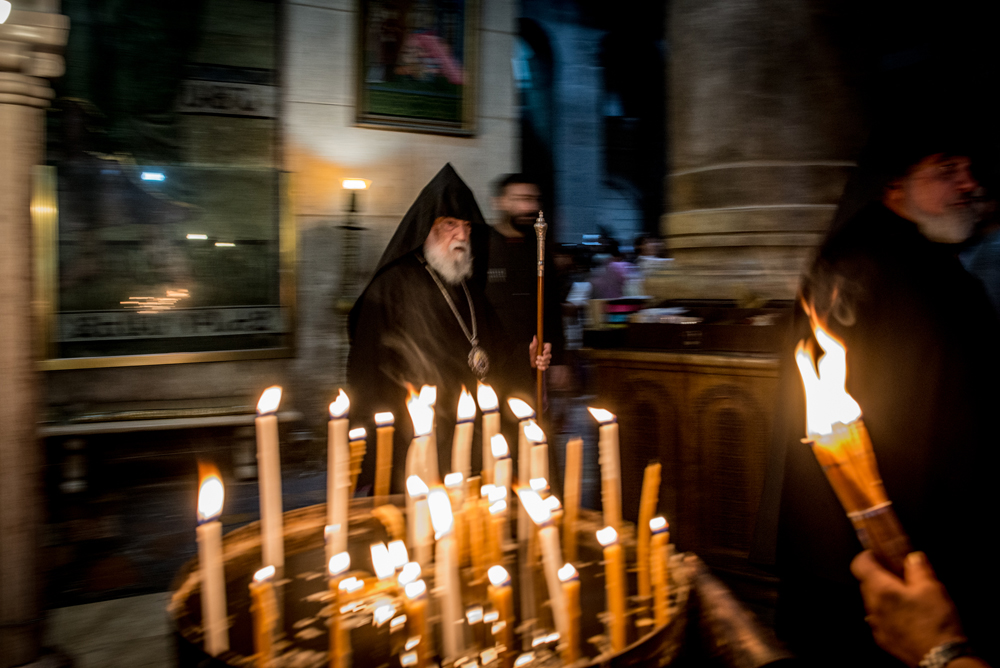 Archbishop Sevan Gharibian, the Grand Sacristan of the Armenian Apostolic Patriarchate of Jerusalem, walks after a procession in the Holy Sepulchre Church in Jerusalem, Israel, Oct. 22, 2017. 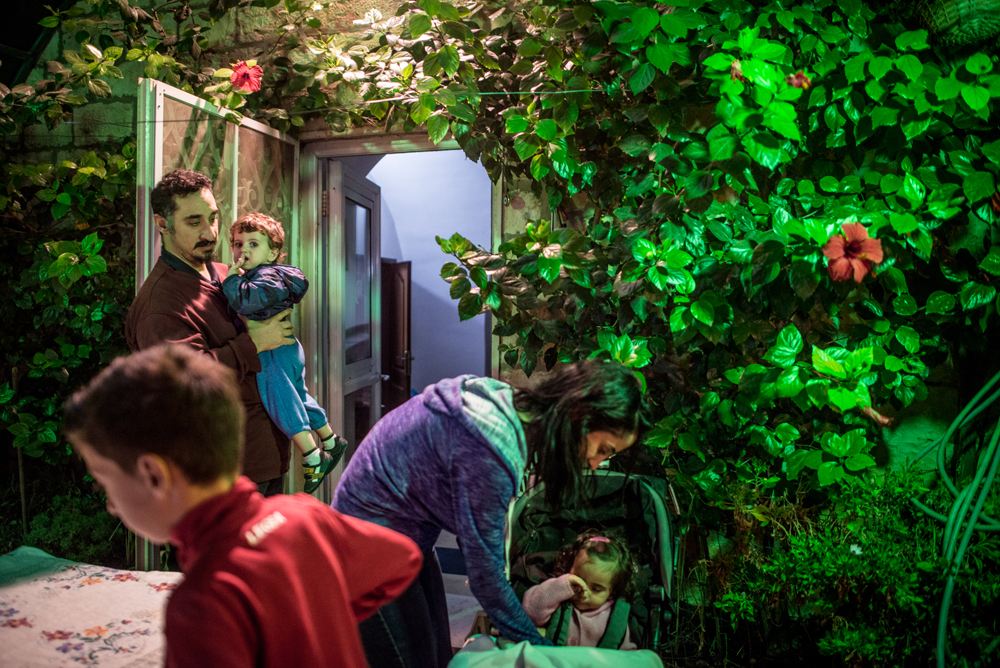 Armenian family prepares for dinner, in the Armenian Quarter, Old City of Jerusalem, Israel, on Oct. 22, 2017. 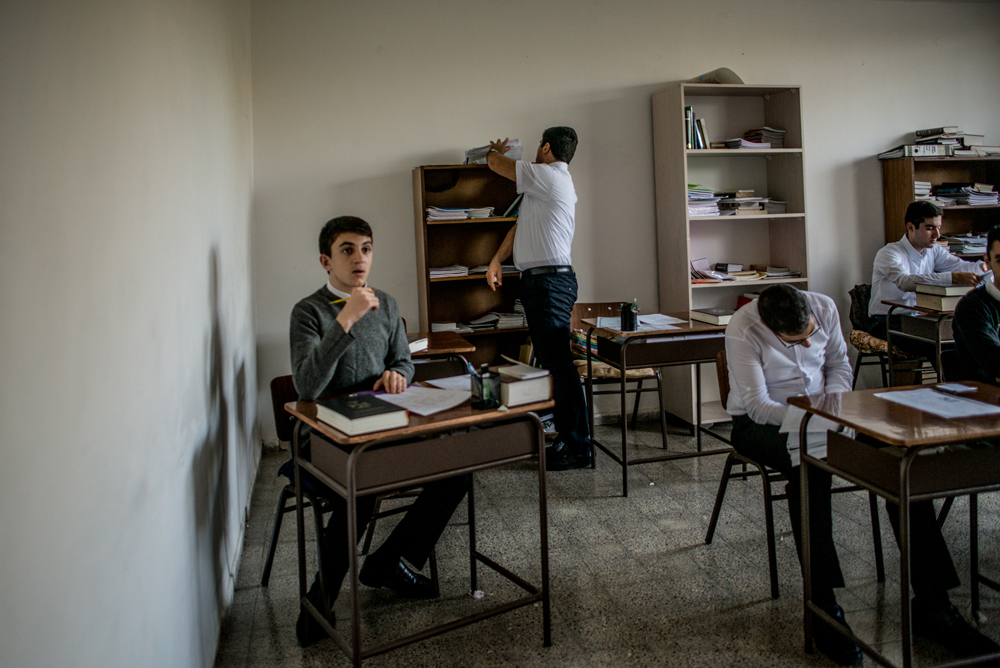 Young men study in the Theological Seminary of the Armenian Patriarchate of Jerusalem , Israel, on Oct. 23, 2017. Most of the students in this Seminary come from Armenia. 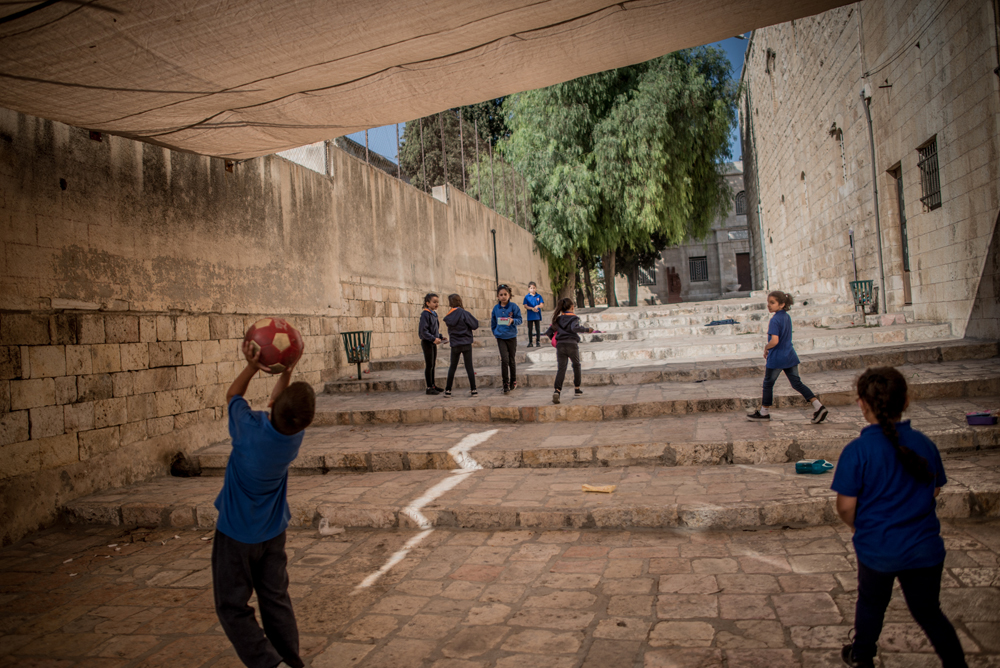 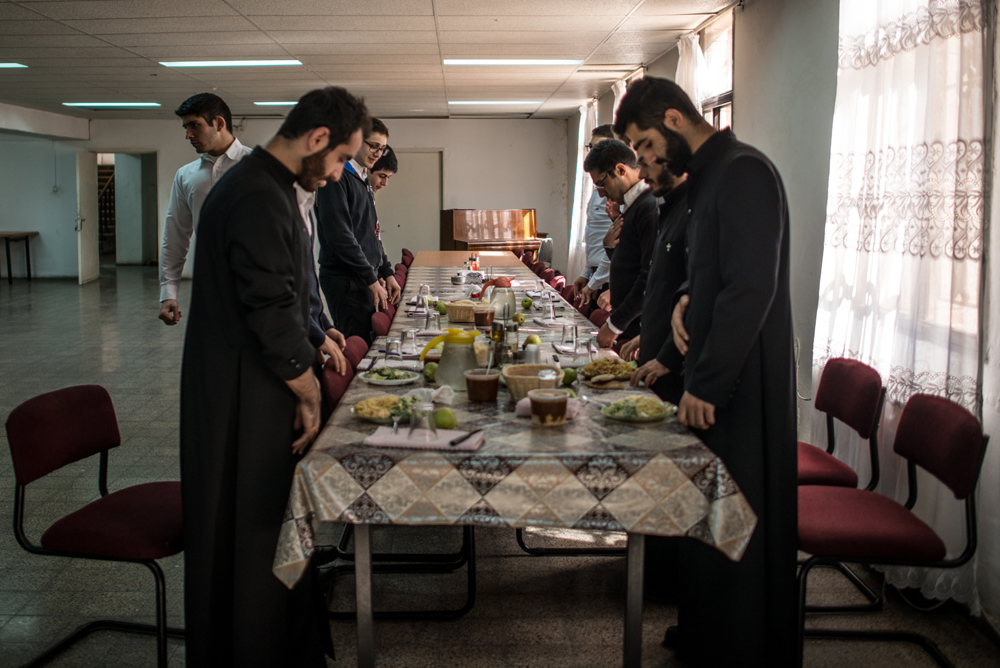 Deacons and students pray ahead of lunch at the Theological Seminary of the Armenian Patriarchate of Jerusalem, Israel, on Oct. 23, 2017. 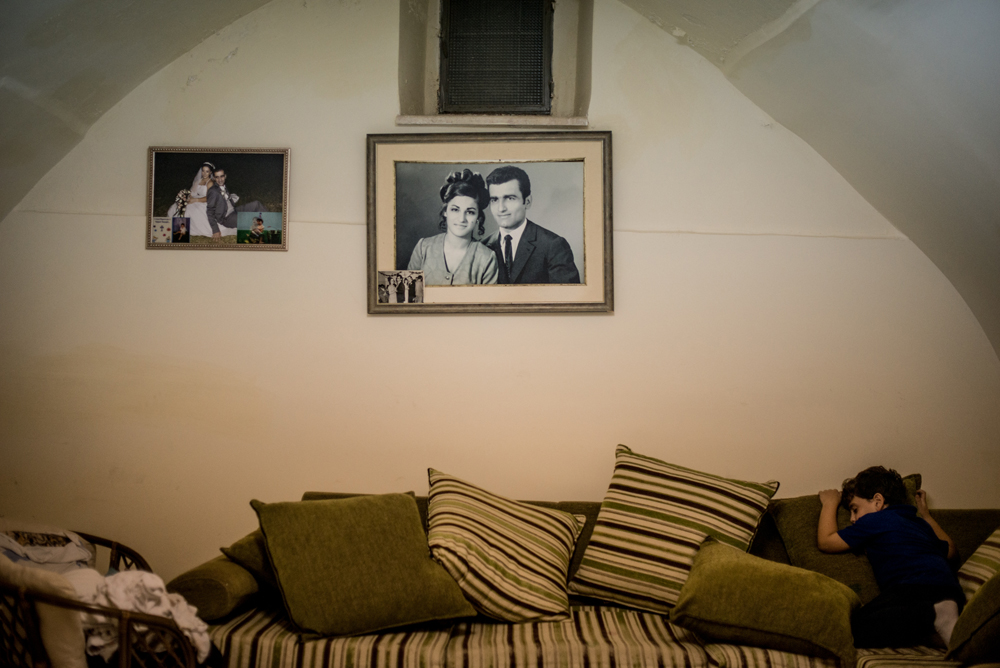 Child plays in the living room of the house of Arpine Yezigelyan, 65, in the Armenian Quarter in Jerusalem, Israel, on Oct. 24, 2017. The portrait on the wall shows Yezigelyan with her late husband who was a carpenter at the Saint James Cathedra. The child playing on the sofa is Yezigelyan's grandson. 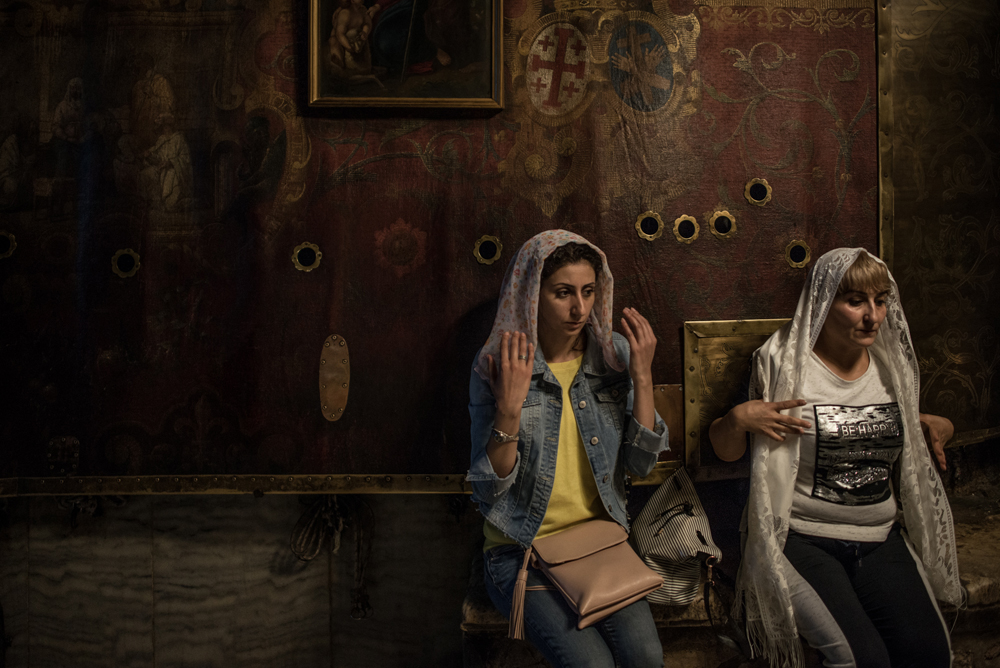 Armenian women pray in the Grotto, the believed location of the cave where Jesus Christ was born, in the Church of the Nativity in Bethlehem, West Bank, Palestine, on Oct 25, 2017. Armenian priests hold church services inside the Grotto two times a day. During the Armenian service only Armenians are allowed. 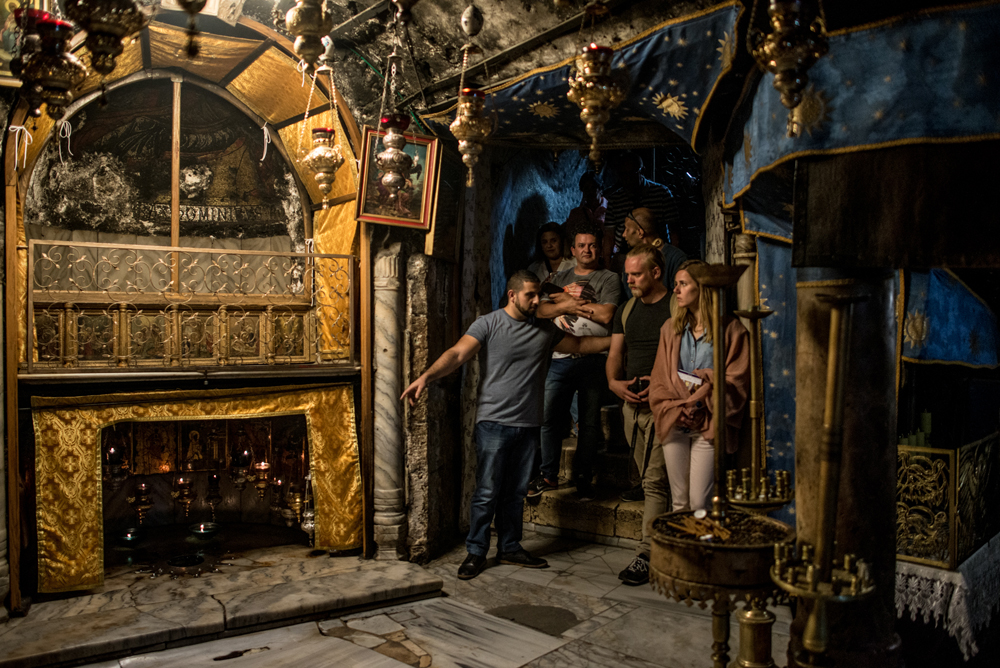 As the Armenian Apostolic service is over, a worker starts letting in people of other nationalities who are not allowed in during the Armenian service at the Grotto in the Church of the Nativity, in Bethlehem, West Bank, Palestine, on Oct 25, 2017. The Grotto is believed to be the location of the cave where Jesus Christ was born. Armenian priests hold church services inside the Grotto two times a day. 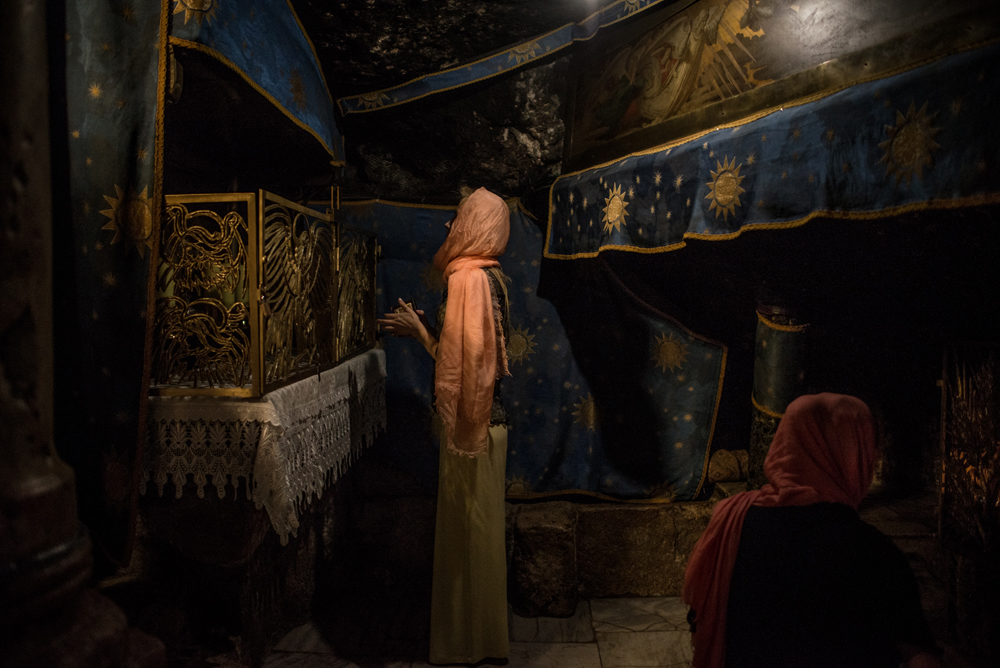 Women pray in the Church of the Nativity in Bethlehem, West Bank, Palestine, on Oct 25, 2017. 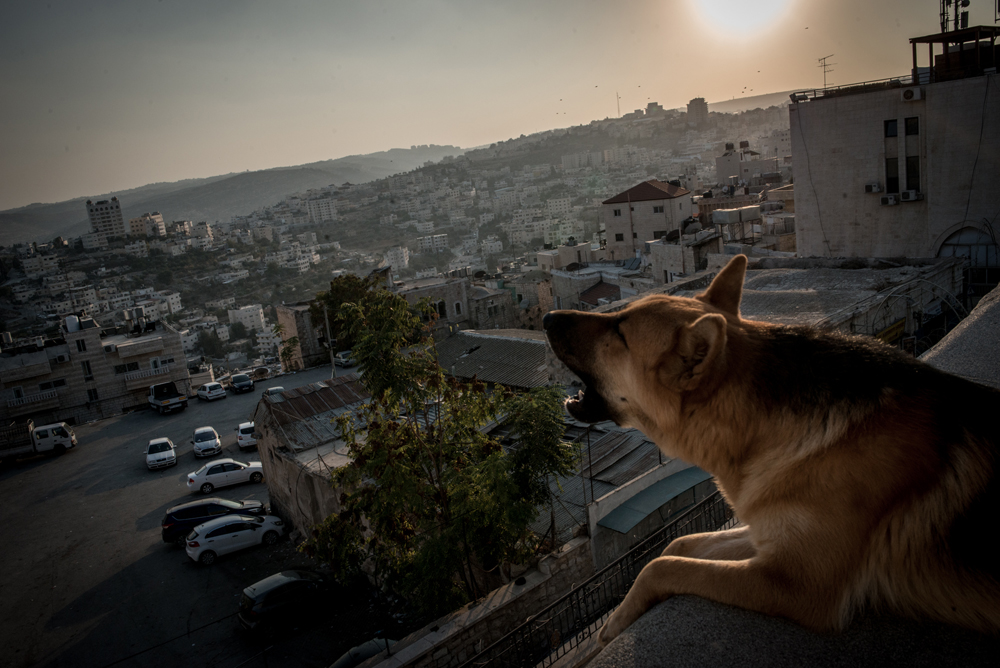 An Armenian priest's dog barks on the roof of the Church of the Nativity in Bethlehem, West Bank, Palestine, on Oct 25, 2017.