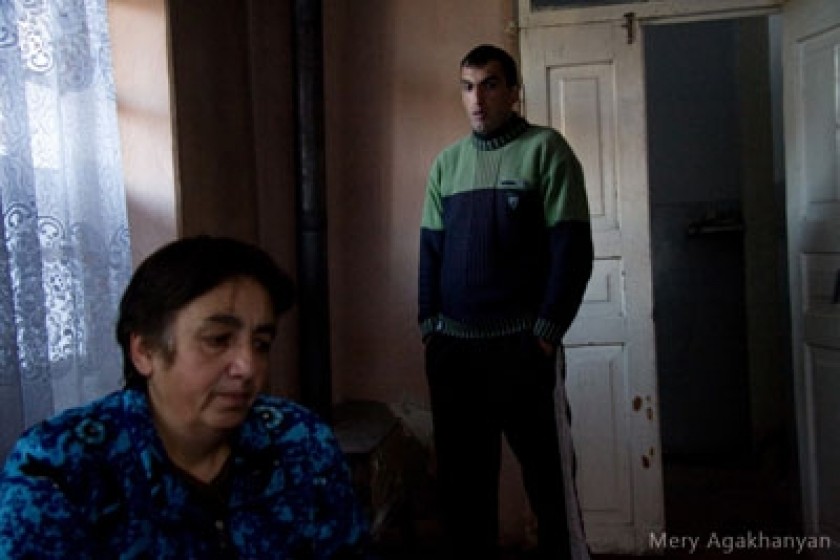 After 22 Months of Captivity in Azerbaijan, Artur Badalyan Recalls the Nightmares

For 22 months he had the tough planks as his bed and prayers as his unquenchable hope. Somewhere far behind the mist was his 5-month son, somewhere nearby – the mice, the non-stop voice of the metal and humiliations.

Haghartsin village inhabitant Artur Badalyan, 32, carries in his mind the nightmares of almost two years of the Azerbaijani captivity that are engraved in his mind, dividing his life into before and after the captivity.

Though he was back home on March 17, as a result of exchange of captives, the nightmares, insomnia, the noises in his head and the permanent feeling of pursuit do not leave him.

On May 9, 2009, Artur and his friends went to pick up mushrooms. In the area of Berd town he lost his friends and his way and fell into the enemy’s hands.

‘Somebody asked for cigarettes in Armenian, I gave him. He said nothing more. Only in Russian – don’t be afraid. Then several approached and took me away,’ he recalls. ‘I was thinking the worst. I thought I wouldn’t ever be back, they were going to slaughter me for their bayram’.

At first, the Azerbaijanis took Artur to a border village military unit, then to Ghazakh, then to Baku and then back to Ghazakh again.

The only good memory of Artur’s captivity in Baku’s lightless and damp prison ward is the mouse with her young mice. They were born and grew up before his eyes. He says they were his only friends in the days of his nightmares.

He tells that the very second day of the captivity, in the military unit of the unknown village, two men made him lie on the belly and hurt his legs by beating him intensively. Afterwards, he was taken to Azerbaijan’s Ghazakh town military unit, where they were switching electric current through his arms.

‘In Ghazakh I was kept lying one day with my hands tied. They wouldn’t untie my arms, so that I could at least massage my legs. The next day, too, they beat me and switched electricity to my arms. I felt the current through whole my body,’ tells Artur with difficulty but in details.

He tells that apart from the physical torture they would torment him psychologically as well, aiming to make him commit suicide.

After Ghazakh, Artur stayed at one of Baku military units for a year and 3 months.

‘In Baku it was terrible. I was treated like a swine and not a human. The ward had no window, there was no light. They would strike the door with a metal item every day. I didn’t have a minute of rest.’

During those 2 years, the captive wasn’t allowed to walk, and very often Artur had to do the deeds in the same ward, where he lived. He was permitted to take care of his personal hygiene only once in 2-3 months in the yard. He recalls the freezing water jet on his body in cold weather.

Many days he passed in hunger.

‘It was a terrible situation. I washed my clothes only when they were “cleaning” the ward with chlorine. Then I had to close my eyes with a piece of cloth, not to go blind. Whole night, naked, I was shaking my clothes or lying on them to dry with the heat of my body. There was no food. I was eating bad bread,’ tell the villager.

He says he was frequently catching cold and hardly being cured without any medicine and care. It would be naïve even to dream of them.

In November 2010, Artur Badalyan was again moved to the same unit of Ghazakh town. He says there he was given some medicaments in the food, since he was feeling very bad, weak and almost insensible.

‘They put a belt there for me to hang myself and there was a special place for hanging, too’ says the survivor of Azerbaijani capture.

When he was in Ghazakh for the second time, he learnt some representatives of the Red Cross would visit him - before that nobody had ever paid him a visit.

‘I told the Red Cross I went to Ghazakh to ask the Azerbaijani side to send me to a third country. They had warned me if I failed to say so, they would send me back to Baku. So, I had to obey, not to appear in Baku again’, explains Artur Badalyan.

Artur is confident all the pressures he underwent had one aim – make him go insane: ‘They were doing all that to make me mad, so that I wouldn’t be be able to tell anything. They wanted my memory to become weak, so that they could say I was crazy.’

Now is trying to recover with the help of his family. His son is 2.5 years old now.

For the tortures in captivity that Artur Badalyan suffered, Vanadzor town’s “Populex” bar office plans to sue Azerbaijan. This is the first action in its form. They plan sending the suit to the European Court of Human Rights within a month.

‘A lot of things have changed. I have more goals now. I want to work to help my family out of the hardships, to restore everything,’ dreams Artur.