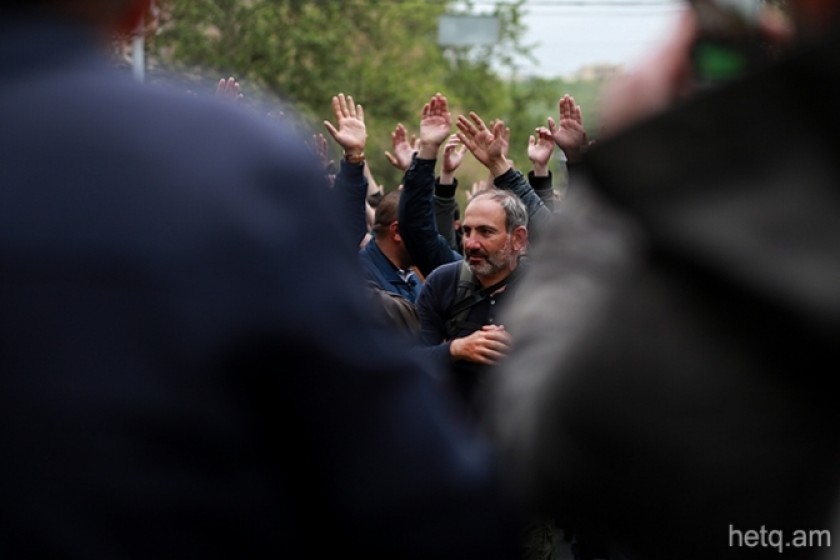 Yerevan’s Anti-Serzh Movement: Rallies, Marches and the Possible Blockade of the Parliament

Ending a two-week anti-Serzh Sargsyan march that kicked off in Gyumri and that wound its way throughout various towns in Armenia, Civil Contract political party head Nikol Pashinyan and supporters reached Yerevan on April 13.

The “Im Kayl” (My Step) march, an amalgam of citizens opposed to ex-Armenian President Serzh Sargsyan’s likely election as the country’s next prime minister, ended in Yerevan’s Liberty Square where several thousand people were waiting to hear what the movement’s leadership would propose in terms of a specific strategy.

Pashinyan had told reporters that the plan was to bring Yerevan life to a halt, blocking traffic and staging sit-downs in strategic locations.

They wanted to confront Simonyan and charge him with turning the university into a tool used by Serzh Sargsyan and the ruling Republican Party of Armenia to “enslave students entering into adulthood”.

In Pashinyan’s words, the university had become a “den of the Republican Party Mafiosi”.

The marchers pushed their way in, demanding to see Simonyan, but the rector never appeared. The joke appearing in the social media was that the rector had hid under a desk.

Pashinyan and the activists left the university and proceeded to Liberty Square.

Taking the impromptu installed stage on the steps of the Opera House, Pashinyan told the crowd that the movement’s number one priority would be to prevent Sargsyan’s election as prime minister and forever remove him from a position of government power.

Pashinyan began a rhetorical critique of Sargsyan’s last ten years as president of Armenia, citing the lack of any progress in tackling systematic corruption, halting emigration from the country, and improving the preparedness of the country’s military.

The firebrand parliamentary deputy, who leads the Yelk Alliance Faction in the National Assembly, then called out Sargsyan for breaking an earlier promise not to seek the office of prime minister, describing Sargsyan’s argument that ensuring Armenia’s continued security was the main reason he couldn’t just walk away and retire from politics.

Pashinyan shot this justification full of holes, reminding the crowd that the army, under Sargsyan’s tenure as both defense minister, prime minister and president had fallen woefully behind Azerbaijan when it comes to procuring modern military equipment.

Pashinyan noted that Armenian soldiers on the frontline, in Artsakh and along Armenia’s border with Azerbaijan are equipped with secondhand military equipment dating back to the 1980s and that families of the soldiers are forced to send them clothes and other basic items.

He also declared that if enough people show up in support, the movement planned to encircle the National Assembly to prevent deputies from staging an election on April 17 to select the country’s next prime minister, a position with expanded powers under the new constitution that sets the stage for Armenia to transition into a parliamentary form of government.

When the speeches ended at Liberty Square, those in attendance then marched on nearby France Square. Pushing past the police, the protesters occupied the square. Tents were pitched, and many spent the night there.

On April 14, a contingent of activists, including Pashinyan, marched on the building housing Armenian Public Radio. Pushing past a security guard or two, the activists confronted management and demanded that Pashinyan be afforded some free airtime to announce an upcoming rally scheduled for later in the evening.

After some tense negotiations, Management rejected this demand.

Pashinyan told reporters on the scene that he wasn't surprised that the government-controlled station rejected the demand and urged citizens to attend today’s rally.

That rally kicked off today at around 7pm local time.

Pashinyan told the crowd that the movement, which united the “My Step” and “Reject Serzh” initiatives, is now tasked with locating Serzh Sargsyan who seems to have gone underground.

He said that today’s scheduled council session of the ruling Republican Party of Armenia took place in Tzaghkadzor, and not the party’s main Yerevan office. Pashinyan claimed the change of venue was due to the fact that the Anti-Serzh Movement had declared its intention to encircle the Republican Party’s Yerevan office.

At the rally, Pashinyan told the crowd that earlier today, upon entering the Public Radio building, the marchers were confronted by a Kalashnikov carrying policeman who loaded his weapon when seeing the activists storming through the doors. Pashinyan said they raised their hands in the air to signal their peaceful intentions.

Pashinyan affirmed his resolve to struggle on, despite what awaits him.

“You want to open fire, go ahead. I will not stop in the face of your illegalities. I will go on, and if the people follow, do your worst. March on and reject Serzh,” Pashinyan told the crowd, reaffirming the movement’s intention to form a human chain around the parliament building.

He urged opposition forces to unite, declaring they had no right to disillusion the people yet again.