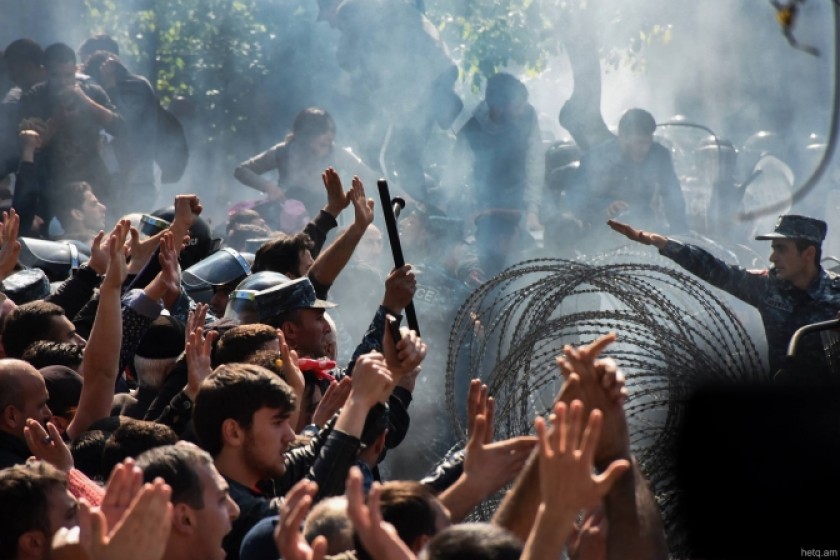 As you are well aware, all of the Armenian nation has been following the peaceful protests in the last 5 days in our country.

I'm writing to you directly because you are the object of focus in this crucial moment of our national journey.

As a citizen, you have to the best of your knowledge served our compatriots and often acted as the official figure head of the Armenian people in the Diaspora.

Like every human being your track record of successfully carrying out your functions as President of the Republic has been met with extraordinary challenges.

You have had two terms to try to deal with all that plagues our society since independence.
You may have tried your best but public opinion does not support this reality.

Corruption, absence of rule of law, police violence, judicial straight jacketing, bribery and election rigging, poverty, depopulation, human and civil rights violations (violence against women, discrimination against LGBTQ communities), absence of freedom of speech have all been a signature daily outcome during your government.

Not that you didn't have the terrifying challenges of the war in Artsakh. Not that we wouldn't grant you an understanding of how difficult that fine line is to cross when surrounded by foreign interests who don't care about Armenia or the Republic of Artsakh.

I, along with many of my compatriots, firmly believe that this political mace is not the one that is putting our beloved country at harm. Armenia will not explode by outside enemy forces if you're no longer at its helm.

Armenia will implode from within it because you and your Republican Party colleagues continue to ignore the citizens craving and belief in a democracy that is our only hope and strategy to survive.
You and I, a few years back, once had an exchange. Under political duress perhaps, you mentioned at the time that Armenian people were like sheep! I responded to you, very perturbed by your metaphor, that if that's the case then they need a good Shepherd.

Since, repeated upheavals in Armenia and outrage in the diaspora communities against your style of governance have proven that we are not a nation of sheep. We are a nation seeking a good Shepherd in a strong, fair, legitimate leadership.

Today, as I write this to you, our old and young, professionals and students, are expressing their discontent about your course of actions during your presidency and your grip over our social, economical and political interests, with even more fervent objections: either by leaving the country out of despair or as in the last days by, once again, going into the streets and peacefully but determinedly demanding for a fair shift of power.

The major change I'm hearing them ask for is your mercy to let the country find another course of action that can come closer to decent democratic opportunities at all levels of its institutions.
Mr. Serzh Sargsyan, Armenia's internal politics cannot solely be interpreted and understood by your own absolute terms, conditions and stratagem.

It is your sworn duty to serve our country with love, hope and communication with the citizens who give to the land a reason to be called Armenia.

But now, you are forcing the hands of your subjects, once again, in your stubborn wish to rule, once again, as the new Prime Minister.

I urge you and your Republican Party to let, at least this once, respectfully choose the voice of diversity to take charge of the newly established constitutional change towards a Parliamentary system that truly represents all members of the nation.

Otherwise, with all due devotion in the name of our compatriots, I am pointing out that your name in the history of our nation, our country, the world, will go down not as a mighty leader but as a power coveting dictator.
We are not Russia. Nor Turkey. Nor Azerbaijan, nor...sadly, the list is long!

We are a small but proud nation who has survived against all odds without a buffer zone to let us easily bounce back and recuperate. But we can!

On April 17, days before the commemoration of the tragedy that befell our nation on April 24, 1915, you can mark a historical moment where you respectfully hear, honour and support all the men and women in the streets of Yerevan, your truthful opposition colleagues, and a diaspora that expects so much goodness for our homeland.

Please don't twist arms. Please don't let a finger or a hand be injured by police force and violence. Please be the voice of the humble and confident Sheppard who allows without fear for himself or for his compatriots to walk the transitional path of a trusting future for Armenia whatever the risks may be along the shift. We are capable of assuming our national interests and together a force to reckon with against the outside predators that threaten us.

Mr. Serzh Sargsyan, modesty, even in politics, is not a weakness. It is a human force and quality that opens the way for choice and that's what your country, my nation is asking you to consider.