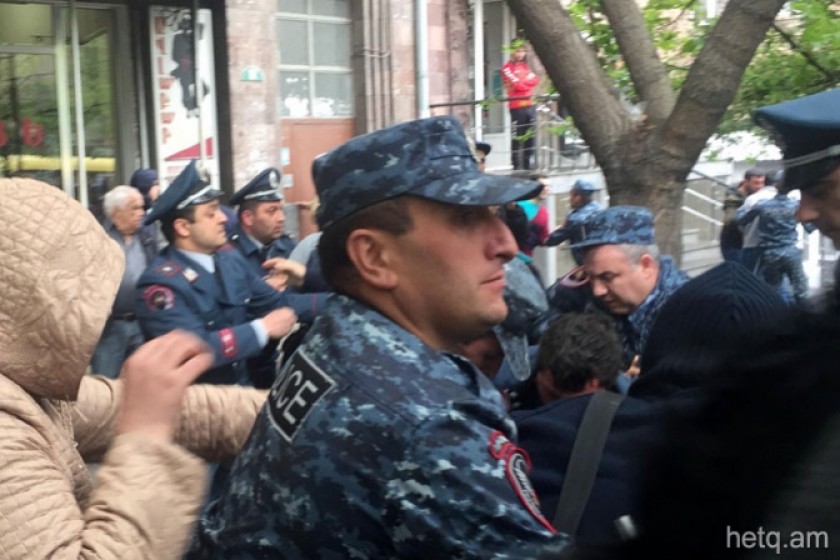 The Police Department of Armenia has issued the following statement regarding their actions vis-à-vis the anti-Serzh Sargsyan protests now taking place in Yerevan and elsewhere.

“At the present time, the police carry out not only the protection of public order, but also the prevention and suppression of crimes and administrative offenses committed by participants of the protests organized by Nikol Pashinyan. During such activities, the police may also use other measures.

"We declare that the persons in civilian dress carrying out the detentions are police officers, for whose actions the police assume full responsibility.

“In recent days, the police have issued more than a dozen statements and announcements, disseminated also by mass media. In particular, it has been repeatedly warned that blocking the streets, obstructing traffic, and failing to comply with legitimate police demands to stop such acts are legal offenses that will be prevented and suppressed by police enforcement measures.

“The police clarifies for the wrongdoers of the rally that many of the abovementioned warnings, appeals, and statements by the police are, by the fact of their issuance, formally legitimate claims. Refusal to comply by them will legitimately lead to adverse legal consequences.”

Robert Davidian 2019-01-25 08:30:32
No they're not. No one knows WHO THEY ARE if they have no identification. I would assume they are kidnappers - which is exactly who they are! Dear citizens, do not GET IN ANY CAR if you are being forced to and don't know the driver or thug forcing you in the car! NO WAY!!!