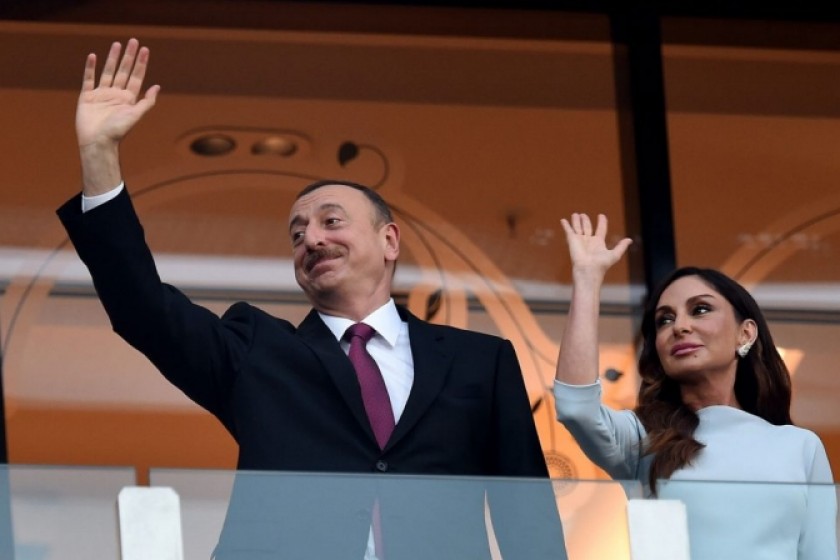 Children of the two most powerful officials in Azerbaijan – President Ilham Aliyev and Minister of Emergencies Kamaladdin Heydarov – used dozens of offshore companies as cover for investments in luxury properties, businesses, and high-end hotels across Europe and Middle East.

Their secrets were hidden in the files of Pilatus Bank, a controversial private bank in Malta that’s being investigated for laundering money for its clients. The network used accounts at the bank to stash profits and funnel millions of dollars into new investments, according to three sources with knowledge of the transactions who can’t be identified because of fear of retaliation. Their revelations were corroborated by public records obtained by reporters.

The previously unreported assets include one of the biggest conglomerates in Azerbaijan, a five-star hotel and more than three dozen other luxury properties in Dubai, French porcelain and linen factories, a villa in southern Spain, and a hotel development in the Republic of Georgia.

The newly revealed holdings underscore the extent to which the Aliyev family and its allies have profited personally from their dominance of Azerbaijan. The Aliyevs have run the oil-rich Caucasus state since its independence from the Soviet Union. Human rights groups and other independent observers accuse the undemocratic regime of regular abuses, including imprisoning journalists and opposition leaders.

Maltese journalist Daphne Caruana Galizia had begun reporting on the Azerbaijani ruling families and their Pilatus accounts before her death. She was murdered by a car bomb last October.

This follow-up investigation is the result of a collaboration of 18 news organizations, including the Organized Crime and Corruption Reporting Project (OCCRP), the Guardian, Reuters, Le Monde, and the New York Times. Led by France’s Forbidden Stories, the Daphne Project was created to continue the Maltese journalist’s work.

Leyla and Arzu Aliyeva, the two daughters of the Azerbaijani President, were the bank’s largest clients and the ultimate beneficial owners of a number of the opaque offshore companies, according to the three sources.

Tale and Nijat Heydarov, the sons of the country’s emergency minister, were the beneficial owners of other companies in the network, according to the same sources.

Kamaladdin Heydarov is a long-serving Azerbaijani official with close ties to the first family. A leaked 2010 US diplomatic cable describes him as having accrued “massive wealth” during his tenure as chairman of the state customs agency — “an agency that is notoriously corrupt, even by Azerbaijani standards.” The family is said to “own more businesses than any other Azerbaijani family,” which is perhaps why Heydarov is known in the country as “the Minister of Everything Significant.”

Lawyers for the Heydarov brothers said: “Our clients are the beneficial owners of companies which hold accounts at Pilatus Bank in Malta, which have entirely legitimate and lawful business.” The structure was set up “to hold European property and assets,” and their ownership was in many cases in the public domain. They also denied the characterization of the family in the diplomatic cables, calling it “not a reliable source.”

The Aliyev daughters did not respond to a request for comment.

The first public revelations about Pilatus and its Azerbaijani clients came from Maria Efimova, a former employee of the bank.

In early 2017, Caruana Galizia met Efimova, a Russian national, about a year after she had been fired from the bank. Efimova had sued Pilatus for failing to pay her salary, and the bank responded by reporting her to the police for misappropriation of funds.

She told the reporter that Aliyev’s eldest daughter Leyla had transferred over €1 million from a Pilatus account held by her Dubai-registered company, Sahra FZCO, to an offshore company owned by the wife of Joseph Muscat, Malta’s Prime Minister.

Once published, the story immediately turned into a major corruption scandal. A local television station filmed Ali Sadr, the bank’s owner, and Antoniella Gauci, its risk manager, leaving the building in the middle of the same night. Ali Sadr was carrying bags of documents.

A few hours later, at about 4 am, a mysterious private jet took off from Malta International Airport, made a stop in Baku, Azerbaijan, and then proceeded to Dubai.

The Maltese prime minister vociferously rejected Caruana Galizia’s reporting, and the jet operator said that no one had been on board. But three days later, the reporter broke another story stating that the bank’s main client was Heydarov, Azerbaijan’s Minister for Emergency Situations.

Caruana Galizia was killed less than six months later. After her murder, Efimova, who said she feared for her life, fled the country. She was arrested in Greece in relation to the accusations Pilatus had made against her, but a court recently ruledthat she will not be extradited back to Malta.

The purpose of Aliyeva’s alleged payments to Muscat’s wife are unclear. The prime minister had made several low-key trips to Baku where he had meetings with President Aliyev that did not follow normal protocol for meetings with foreign leaders. He has also publicly praised Azerbaijan’s notoriously rigged elections.

While OCCRP and partners were not able to independently confirm Caruana Galizia’s reporting about the payment, and Efimova was not able to provide the document she claims to have seen, her assertion that the bank served the Azerbaijani ruling elite, including the president’s daughters, appears confirmed.

Following his arrest, Malta’s banking regulator froze all of the bank’s assets, including those held on behalf of clients.

Sahra FZCO — the company whose transaction sparked the scandal with the Prime Minister’s wife — appears to have been among the bank’s first clients. The beneficial owners of the company, which was incorporated in Dubai’s Jabel Ali free zone in 2004, are President Aliyev’s daughters, according to the three sources with knowledge of the company’s transactions.

Sahra FZCO opened an account in Pilatus in August 2015. It was used to receive payments from the Aliyev family’s real estate projects in Dubai, according to the three sources.

Property records show that Sahra FZCO owns land and a luxury resort on Palm Jumeirah, the man-made island in the shape of a palm tree off the coast of Dubai. The Sofitel Palm Resort & Spa on the east crescent features 361 rooms and suites and 182 residences. According to its advertising materials, it offers guests Polynesian design with a French flair, stunning views over Dubai, and an exclusive half-kilometer-long beach.

AccorHotels, a French multinational hotel group, operates the facility. The company refused to divulge its partner in the hotel without their agreement.

Sahra FZCO also appears to own another AccorHotels property in Dubai, the Mercure Barsha.