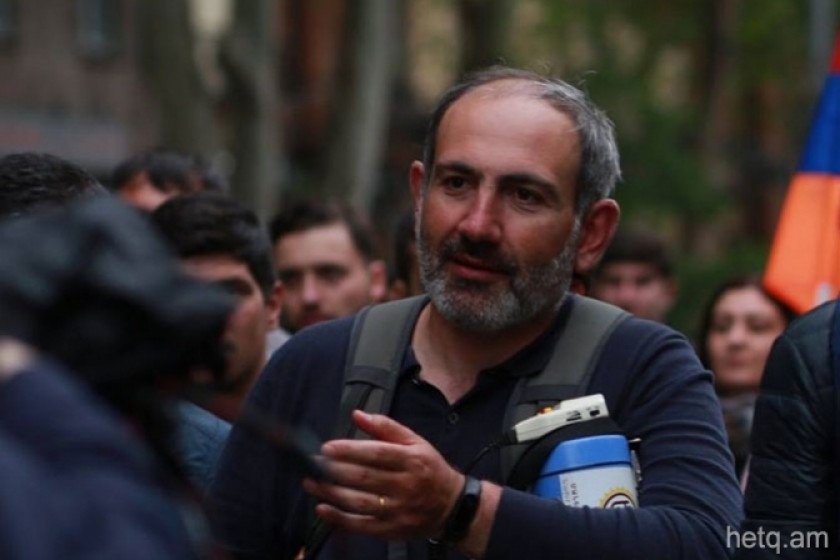 At a press conference today with the international news outlets, anti-government protest leader Nikol Pashinyan said the “Velvet Revolution” in Armenia isn’t over.

“Yes, we’ve achieved our first and most difficult goal, the resignation of Serzh Sargsyan as prime minister, but there’s still the question of the full and smooth transition of power.”

Pashinyan is referring to the movement’s demand that the country’s new prime minister must be a person selected by the people.

When asked how that selection would be made, Pashinyan told reporters that the people in Yerevan’s Republic Square, the epicenter of the protest movement, would make that choice.

Pashinyan said that if so nominated, he wouldn’t refuse the wish of the masses.

Pashinyan categorically stated that the next prime minister could not be a member of the ruling Republican Party of Armenia (RPA), adding that even if acting prime minister Karen Karapetyan left the party, he couldn’t seek the post.

Asked what would happen if the RPA, which now controls a majority in parliament, blocked the election of the “people’s choice”, Pashinyan responded: “The RPA no longer has authority. It’s a ghost. The people of Armenia and the diaspora are our guarantee. No other power can resist us.”

In a veiled threat to the Republican Party of Armenia, which holds a parliamentary majority, Pashinyan said: “The real power in Armenia stems from the people gathered in Republic Square. No one should dare resist it.”

Regarding tomorrow’s scheduled meeting with Karen Karapetyan, Pashinyan said he’ll be negotiating with the RPA, and not with Karapetyan the individual.

In terms of foreign policy, Pashinyan said friendly relations would be maintained with Russia and that there are no immediate plans to leave CSTO (the Collective Security Treaty Organization).

Pashinyan noted that Armenia faces security issues on two borders – with Turkey and Azerbaijan – and that Russian military bases in Armenia are seen as an asset, not a hindrance.

The new government would also implement the Comprehensive and Enhanced Partnership Agreement (CEPA) Armenia signed with the European Union in 2017.