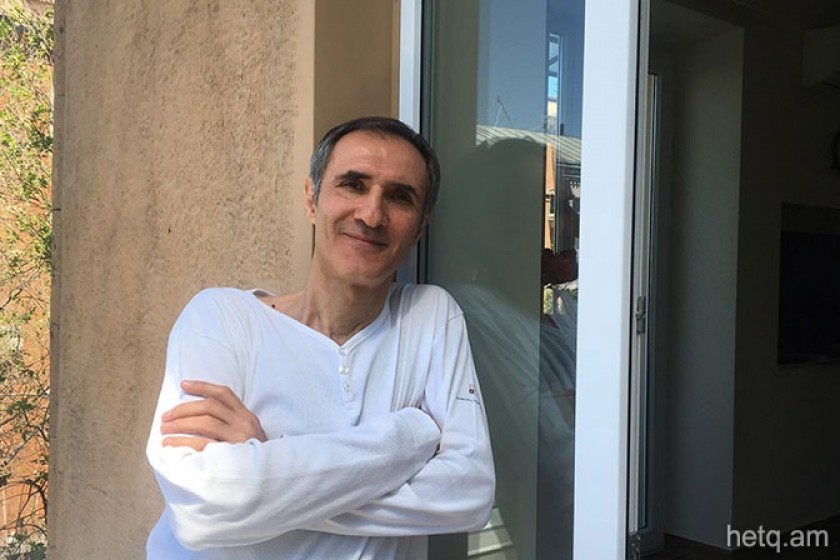 Actor Vardan Petrosyan: “No revolutionary movement has ever used humanity and virtue as weapons”

Actor Vardan Petrosyan returned to Armenia two days ago. He told Hetq that the trip hadn't been planned.

Vardan, it’s been two days that you are in Yerevan. Before that, you might have been following the movement from the diaspora. What have you felt, seen, recorded?

Yes, I have been following the movement from the first day. And not only me. People in the diaspora follow events in Armenia on the Internet all day long. Many people would like to be in Armenia now, but do not have the opportunity. I came since being abroad was unbearable. There were also things that troubled me, that's why I wanted to be present, not only physically, but also to live these moments.

What changes have you seen in people here in Yerevan?

The first change is that the wheel of the movement is in the hands of the youth. This is the most important, the most touching, and the most enjoyable change. Young people do not want to live the way they lived before. We just have to stand by them. Our generation did what it did, good or bad, it doesn’t matter anymore.

Yesterday, I arrived in a country that was different from the Armenia that used to be. See the happiness of people, so many smiles and courage! When I used to visit Armenia, I felt the people suffered from some form of depression, and they had fears.

They’d ask, "Vardan, what's going to happen? How do you see the way out? How long will this situation last?" I was encouraging people with my performances and private talks as much as I could.

But what I saw today is very important - people have got rid of fear, have overcome their fears, have become other people – “right” people.

Everyone understands that there are difficulties and there will be, but people feel that they are building a state. Irreversible, bright changes have taken place. Finally, Armenian people have made a decision - it’s impossible to continue living in a state of stagnation any more. Politicians have to understand this. Nobody will be deceived by demagogy any more. These are not  the people they knew.

In your opinion, what has motivated people to take the streets?

This was an eruption of a sleeping volcano and internal expectations. Armenia was in a critical state. Injustice became a lifestyle. Even the wealthy people were leaving the country. There was a stagnant situation in the country, which would lead to something. And everything started with Nikol Pashinyan's steps from Gyumri.

You spoke about injustice. What kind of changes are needed in the judicial system?

Culture, education, justice - all spheres have been desecrated.

But if we are led by thoughts of revenge, the country will not be restored. All matters must be addressed legally.

I have experience with the judicial system. I have seen what is happening in the prisons and courts. All of this should definitely change. After I got out of prison, my new performance is about the problems of the judicial system. That system has been getting richer, with detained people being one of the sources of enrichment. Do you know how many wrongly convicted innocent people are in our prisons? Of course, I cannot state a percentage, but more than half are. When a person is sentenced to six years of imprisonment for placing a Christmas tree, or to five years for stealing 10,000 drams ($21), such examples speak volumes.

The ruling regime is really pushing back when Nikol Pashinyan talks about the establishment of the rule of law and the need for all to equal before the law. Why is this so?

This morning, the French "Liberation" newspaper wrote that in Armenia 55 bandits were against 3 million people. I really like the fact that the leader of the movement does not call for any vendettas. Everything should be settled within the law. Even those who have become wealthy through illegal means will be happy to operate legally.

Yesterday, I was watching speeches of Republican Party MPs in the National Assembly. They started talking about the constitution, while they were violating the constitution for years. They posed questions to PM candidate Nikol Pashinyan like, “What if there’s no sun any more, what if the planet doesn’t go round, is the future prime minister prepared for such eventualities?”

It turns out that during all these years we had prime ministers who were dealing with space issues, ensuring the gravity of the earth for people, probably delivering sunrays to our country. How could they be involved in bribery? It made me sick. Those who were addressing Pashinyan in the parliament yesterday, should understand that their train is gone. The people are united.

What makes you excited and hopeful about the movement?

I am sure this will present a great opportunity for Armenia's rapid development. Armenia can really become a powerful state. The people will achieve their victory step by step.

Just yesterday, I saw people exuberantly celebrating, but none of them lost their poise or sense of self-organization.

At the beginning of our conversation, you mentioned that you had noticed some disturbing things.

Certainly, there are some disturbing things. I do not know the course of the movement tomorrow. Therefore, we must be vigilant. I call on intellectuals and celebrities to stand next to the people and the youth.

If some want to repress this awakening, they should realize that these self-organized, bright, creative young people can no longer be harassed. You can do nothing to a creative person. Barriers will make them be more creative, since they have internal belief. Their virtue is their weapon.

Today, we have a victorious youth. I am convinced that no one can break this movement. And if anyone assumes that they can bring forces from abroad, they’d better not try to. No one can be intimidated by force any more. March 1 will not be repeated. Let the Republicans come to the street to look in people's eyes. I think they won’t dare, though. Nobody will touch them - it’s just that they will be left out of this. They are alienated.

Is this “velvet” Armenian revolution similar to those described in the textbooks?

No revolutionary movement has ever used humanity and virtue as weapons.

Revolutions typically used hatred as a weapon. It was always the case with us- dividing everything into black and white. But now, there’s an amazing maturity and wonderful tenderness towards each other. This is a wonderful moment.