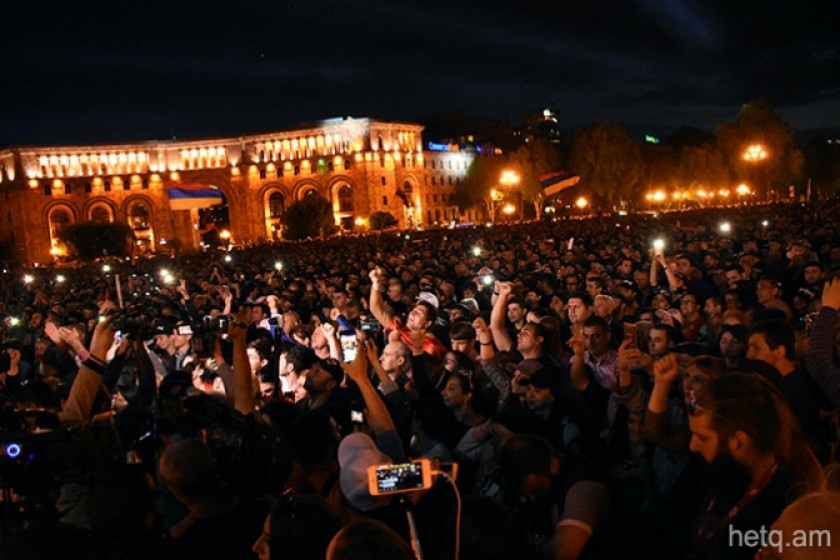 Addressing a huge crowd gathered in Yerevan’s Republic Square this evening, anti-government protest leader Nikol Pashinyan, who lost yesterday’s election to become Armenia’s next prime minister by a vote of 56-45, declared that he is certain that 35 MPs will nominate him for the next election on May 8.

Referring to a statement issued by the Republican Party of Armenia (RPA) that it will not nominate a candidate of its own and will vote in favor of the candidate nominated by one-third of the parliamentary deputies, Pashinyan said that his election was almost a foregone conclusion.

“But these are verbal statements. Tomorrow, we must draft documents to this effect and get a more details regarding the RPA position,” Pashinyan said.

He called for a halt to all protests tomorrow, allowing his supporters to enjoy a much-needed rest.

“Follow my Facebook page and stay informed as to what’s happening. If all goes well, we’ll prepare for the election. On that day we will rally again, not 250,000 but 500,000,” Pashinyan said, adding that he bows with pride in front of the people of Armenia.

“Long live the most powerful citizenry in the world. Long live Armenia, the world’s most beautiful country. Long live Artsakh, which will become an inseparable part of the Republic of Armenia,” Pashinyan told the crowd numbering in the tens of thousands.