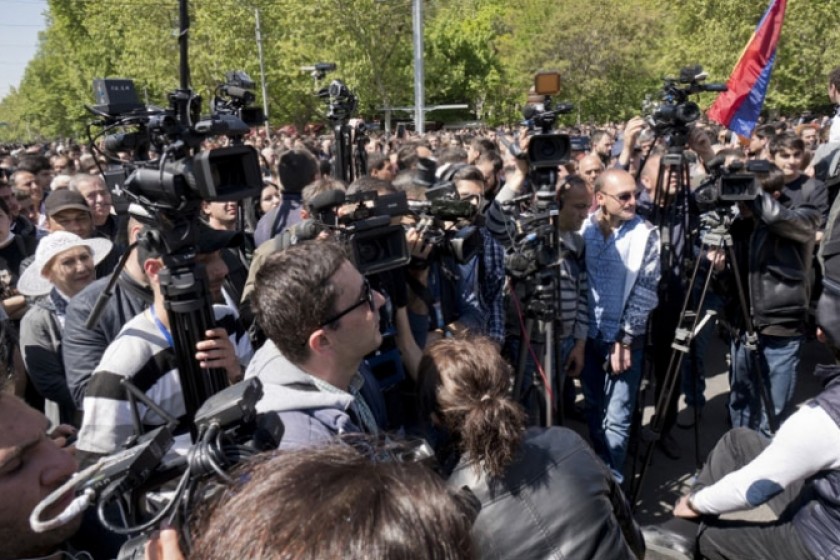 May 3 is World Press Freedom Day.

Reporters and media NGOs have compiled a summary of the state of freedom of speech in Armenia. It’s a given that cases of violence against reporters increase during elections, rallies and mass demonstrations.

Experts have shown that the same was the case during the recent protests, led by Nikol Pashinyan, to first oust Serzh Sargsyan as prime minister and then to topple the government led by the Republican Party of Armenia. 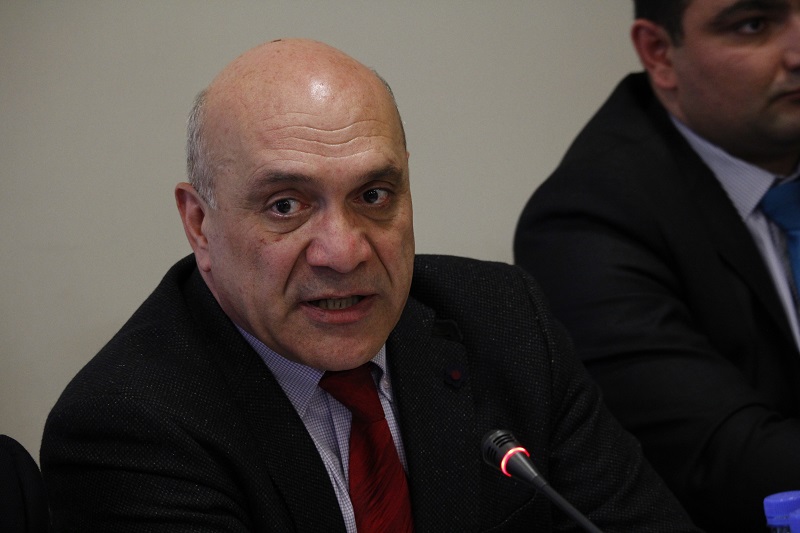 Ashot Melikyan, President of the Committee to Defend Free Speech, told Hetq that 27 reporters and camera-operators were injured while covering recent civil disobedience in Armenia, this according to preliminary data. 16 were physically assaulted. In two cases, media outlet reps were pressured but no physical violence was used. Their work was interfered with. Another nine were injured during scuffles or when police employed “special measures”.

Prosecutor General Office data shows that between April 13 and 23 of this year, 17 cases where the work of reporters covering civil disobedience was hindered were registered. Twelve of these, regarding 14 reporters, are described as having evident signs of criminality.

Analyzing the events of past years, Melikyan notes that cases of violence against reporters and the press were perpetrated by the police, those individuals in civilian dress enjoying police protection, or those “in the service” of the government.

“If we analyze the events of the past ten years, we see that most of the cases where the rights of reporters and the press have been trampled have gone unanswered, and the authorities don’t take sufficient measures to bring to find the guilty and hold this responsible. I believe there’s a tendency here. The authorities of the Republican Party of Armenia have never been serious regarding the violation of reporter rights. They’ve looked the other way, and frequently, have covered up the cases,” Melikyan writes.

In 2017 alone, the Committee registered 11 violations of violence against reporters, 113 cases of media outlets and their workers being pressured in various ways, and 62 violations of receiving and disseminating information.

2017 was also unprecedented in terms of the number of new court cases against reporters and media outlets. According to the Union, 30 court cases alone were filed against Daniel Ionnisyan, founder of the Sut.am news website, and the Informed Citizens’ Union that he coordinates. They deal with a March 24 article revealing how principals of schools and kindergartens used their administrative powers to collect votes in favor of the ruling Republican Party of Armenia during the pre-election campaign. All the plaintiffs demanded a retraction of the alleged slander and AMD 2 million in compensation. However, at the first court session, all these petitions were withdrawn. Over the year, there were sixty cases in which media outlets or reporters were involved, all dealing with insult and slander.

“After these developments, I believe that the new government must create better conditions for freedom of speech and for media outlets to freely operate,” says Melikyan. The laws that regulate the sector concern him, especially “The Law on Television and Radio”, whose many clauses don’t correspond to today’s standards. In addition, he finds it unacceptable to have such a supervised broadcast field.

For Armenia’s poorest class, TV remains the major source of information. There are people who aren’t accustomed to paying for news and depend on unpaid TV and radio stations. In the case of paid for TV, Melikyan says their credibility and diversity is questioned. He believes, sadly, the print media is dying. Financial difficulties aren’t the only reason. He also points to the splitting of the print media into different branches – political, economic, oligarchic, etc.

“The concentration of news outlets in the hands of certain oligarchs is unacceptable. These are not only holdings but are news outlets n and ruled by one owner. I can bring different examples. I believe that all of this has led to various international organizations, including Freedom House, describe Armenia as a country not having a free press,” Melikyan says.

Tehmineh Yenokyan: The Examination of Cases is Productive

Tehmineh Yenokyan, a reporter with Lragir.am., is one of the reporters injured during the My Step protests. On April 27, she filed a report at the Nor Nork police station that a group of unknown persons hindered her professional work in Yerevan at the intersection of Heratsi, Armenakyan and Myasnikyan streets. A criminal case was launched based on Article 164 of the Criminal Code (Hindrance to the legal professional activities of a journalist). 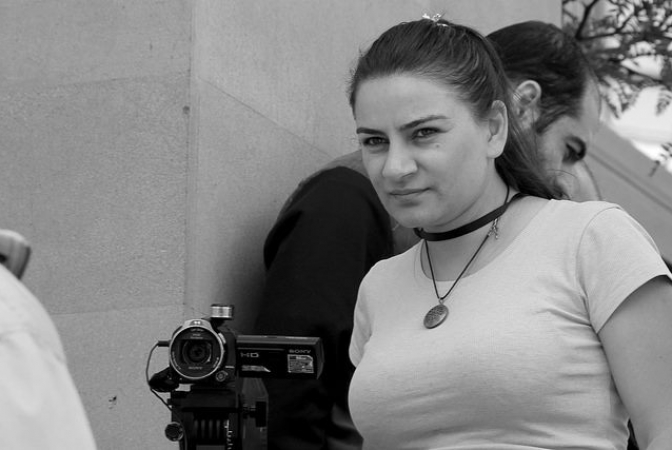 Tehmineh says that those who hindered her work and attacked demonstrators were the relatives/friends of Nor Nork administrative district employees.

“The police arrived when those people had already attacked the demonstrators. I file a report about the crime at the Nork police station. I noted that I had no financial demand and that my professional work had been grossly hindered. Based on my experience, I had no expectations that the perpetrators would be identified. I have two other cases, dating to 2013, that are still in the examination phase. Nevertheless, given the changes taking place in the country, perhaps those people will be identified, that the case will go to court, and that just punishments are meted out,” says Tehmineh.

The reporter says that one of the cases was launched based on the December 2, 2013 incident involving illegalities by the Shengavit police. Russian President Putin arrived in Armenia on that day and people were peacefully protesting Armenia’s membership in the Eurasian Economic Union. When Yenokyan was covering the protest for Lragir.am a group of men in civilian dress grabbed her and drove her to the police station. She was held there for over an hour before being released.

Tehmineh says that the prosecutor never launched a case. She protested the decision up to the appeals court. The case is now being heard.

The other case involves the Electric Yerevan protests of 2015, when the Public Utilities Regulatory Commission decided to hike the price of electricity in Armenia. Protesters blocked Yerevan’s Baghramyan Avenue for days. The reporter had a confrontation with police. She then petitioned the European Court of Human Rights, regarding the domestic court’s examination of the matter unproductive.

Armenian Human Rights Defender Arman Tatoyan says the research conducted by his office shows that reporters possess the correct understanding that the lack of accountability mechanisms is the reason why the impression that there’s impunity in the country takes shape. All this becomes evident during elections and other events of public importance, since the defense of the right of reporters to work freely during such times goes a long way to create public confidence in the processes taking place. 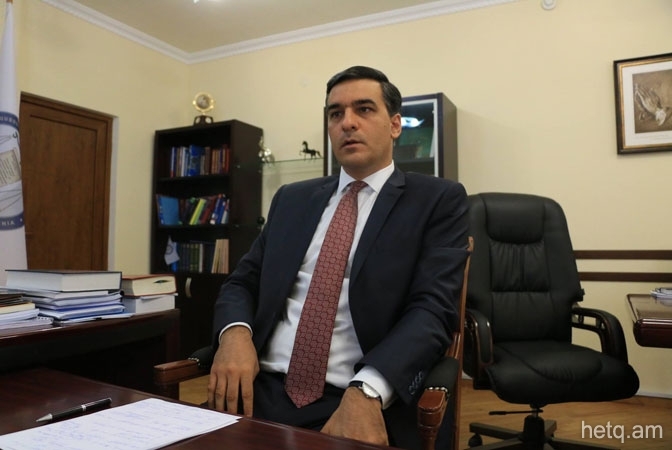 “From a system-wide perspective, an atmosphere must be created in the country where reporters feel that their professional work is being defended by the government. We have always noted that cooperating with reporters must be an operating principle of all government bodies, given that it also ensures the dissemination of the work of public officials,” says Tatoyan.

The Human Rights Defender says his office has compiled a list of cases in which reporters have been hindered in carrying out their professional work during the recent political protests, and that a list has been forwarded to the proper authorities.

“Sadly, there are still misconceptions and stereotypes regarding about the role that reporters play that make their work more difficult and not as productive as possible. Thus, it’s vital to uproot those public perceptions, with the presumption always being in favor of the reporter’s legal and respectful work,” Tatoyan says.

He believes reporters play an irreplaceable public role, especially during important events like parliamentary elections. Thus, their work must be fully protected to allow for the collection and dissemination of any information on electoral irregularities and violations.

Law enforcement must immediately respond to any news that reporters are being hindered in their work. But this is still not enough.

To defend the rights of reporters most effectively, strict measures of accountability must be enacted against those found guilty of hindering the work of reporters, regardless of who they are.