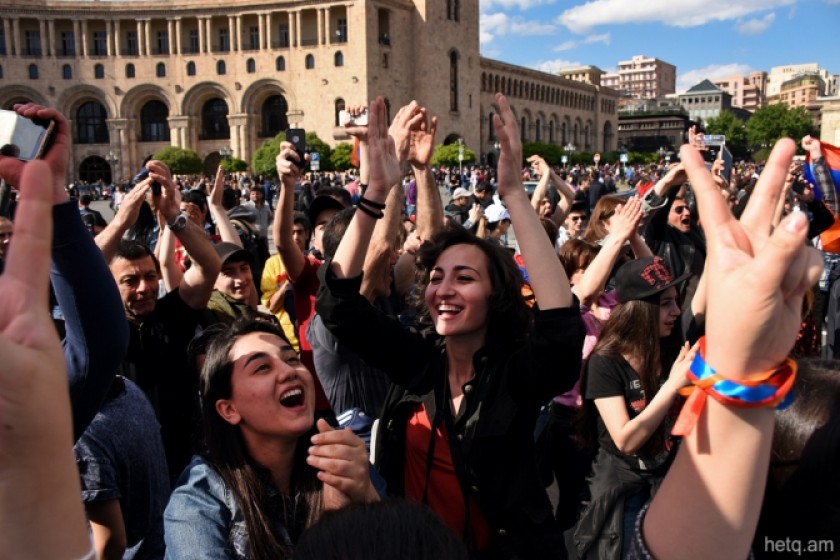 Armenia: No Organization, No Real Change

They took to the streets by the tens of thousands to end corruption and impunity, and to put the lethargy of the past behind them.

In a stunning turn of events, they reached their immediate goal, removing the Republic’s first Prime Minister, Serzh Sargsyan, from office.  And it all took place without bloodshed, thanks to the appeals of opposition leader Nikol Pashinyan, as well as the level-headedness of Sargsyan and the police--and thanks, most importantly, to the forbearance and good cheer of the young demonstrators themselves.

As we know, Pashinyan dubbed the events a “Velvet Revolution.” This was an unfortunate choice of words.  The original “Velvet Revolution,” the one that took place in Czechoslovakia in 1989,resulted in a division of the country, generalized poverty, an explosion of corruption, and abject subservience to Berlin and Brussels.  No surprise, then, that twenty-two years after Vaclav Havel’s “Velvet Revolution,” a Western opinion poll reported that Czechs preferred life “under communism” to the post- ‘89 capitalist regime.  (“Less than a quarter of adult Czechs feel they are better off now than under communism, according to a new poll,” Christian Falvey, Radio Praha, 20 November 2011.)

What took place in Yerevan earlier this month was not a Velvet Revolution; indeed, it was no kind of revolution at all.

A genuine revolution brings a new class to power.  And a counter-revolution--like the one that removed the last few vestiges of workers’ power fromArmenia twenty-seven years ago--brings an exploiting class back to power.

There is no evidence that the events of the past month have done either of these things.

At the end of May, it seems clear enough that the political monopoly of the big capitalists remains unchallenged as before, and workers remain disenfranchised.  Indeed, so far the faces of the oligarchs haven’t even changed.  (But stay tuned:  we should expect several insiders of the new administration to transform themselves into oligarchs.)

What has taken place in Armenia since Sargsyan’s resignation was neither a revolution nor a counter-revolution; it was just a change of administration.  With any luck, the change might result in greater accountability by officialdom and employers.  But if this happens, it will take place against the background of continuing capitalist rule and regional conditions of imperialist domination and rivalries.

Some people have described Pashinyan, the “People’s Candidate,” as a democratic socialist.  If only this were not a case of wishful thinking!

Pashinyan’s Civil Contract party describes itself as “liberal,” which meansthat we should expect to hear even more of the same old bilge about the miracles of “democracy and free markets.”

The new Prime Minister’s advisors and his new cabinet include new faces, but they are almost all male, and it does not look like any of them question the neoliberal boosterism that celebrates thirty years of national disaster in Free Independent Armenia.

Much has been made of Pashinyan’s announcement that he would seek the advice of economist Daron Acemoglu.  The MIT economist’s belief that “democratic institutions” facilitate economic growth seems to dovetail with a prevailing hope among Pashinyan supporters that a more democratic capitalism will be the panacea for Armenia’s ills.  In any case, Pashinyan’s party, like Sargsyan’s Republican Party and Ter-Petrosyan’s Armenian National Congress before it, will in all likelihood represent the interests of one or another clique oflocal capitalist managers for foreign capital.

It is not as if Pashinyan and his new administration are bad, deceitful people.  If they are to continue to occupy the positions to which they have risen, then they have no choice but to advance the power and wealth of the minority over the majority.  There is a lesson here for observers willing to notice, a lesson about a materialist approach to the study of history.

At the Supreme Eurasian Economic Council (SEEC) meeting in Sochi on 14 May, Pashinyan affirmed that the Republic of Armenia would continue membership in the Eurasian Economic Union (EEU) and the Collective Security Treaty Organization (CSTO).  Let us recall that Pashinyan and his party are members of the Yelk (“Exit”) Alliance, which, in the minds of some Yerevan residents at any rate, stood for withdrawing from these arrangements. The new Prime Minister’s decision to reaffirm Armenia’s commitment to the EEU and the CSTO should come as a relief to our thoughtful compatriots:  Pashinyan at least is no Saakashvili.

True, the new Prime Minister’s assurances in Sochi were little more than an acknowledgmentof the facts of life. But for a victorious opposition leader in Yerevan, a prompt recognition of obvious facts should count as something of an achievement:  over the decades, at least one of Armenia’s Presidents, and many of the country’s would-be leaders, too, have not managed to achieve even this.

At this point, then, it does not appear that we should expect dramatic policy shifts. The new administration will be heavy on the anti-corruption rhetoric, but beyond that, it looks like the changes to come will be mostly stylistic.

Many of the young demonstrators who took to the streets in April have had a chance to leave the country of their birthbut chose toremain in Armenia.  “This is my country,” more than one of them explained to foreign journalists.

Armenians decades ago had grown sick of privatization, and since then they have grown tired of unemployment and underemployment, too, and of the elimination of affordable healthcare and quality public schools, of gaping inequalities of wealth, of the impunity of plutocrats, of the toleration of domestic violence, and of pervasive bribery, the ravages of mining companies, political misrepresentation, and crooked judges who almost always side with the rich against the poor.

But now women and men of a new generation are more impatient than they are tired. They want to head in the direction of that genuinely revolutionary demand, equality of opportunity.

In Armenia as elsewhere, their numbers have been growing and their voices have become stronger and steadier. Yet the decision-makers continue to push policies in the opposite direction:  further privatization of public schools; the privatization of pensions; further cutbacks for healthcare; a longer work week;a lower age for child labor; fewer legal protections for workers; even more tax breaks for the rich, and even more public giveaways for corporationsand mining companies.  As one long-time observer put it, Armenia’s leaders still, at this late date, expect us to hope for “more capitalist solutions to the problems that capitalism itself has created.”

But in Armenia as elsewhere, fewer people these days are willing to suspend their disbelief.  In the days following the May 8 election of Pashinyan to the office of Prime Minister, groups of women,students, workers, farmers, and consumershave come together at multiple spots in Yerevan and other parts of the country to block streets and highways and to demonstrate in front of public buildings, factories, and offices. Students and parents press their demand to replacea principal accused of corruption; Yerevan residents demand the resignation of the mayor; students at Shirak University in Gyumri demand the resignation of a rector;workers at the Nairit chemical plant demand higher wages; taxi drivers protest traffic enforcement fees that have made it impossible to earn a living; office workers protest job cuts; milk farmers demand higher purchase prices from dairy companies; environmentalists oppose illegal logging in a park.

In an especially interesting case, workers of the Ararat Cement Factory near the town of Ararat blocked the plant’s entrance with trucks and protested outside, demanding higher salaries. The factory’s owner is none other than the well-known oligarch and MP, Gagik Tsarukyan,founder of the Prosperous Armenia Party. Here, we see the reality of a vision of “prosperity” under the rule of oligarchs who refuse to pay a livable wage to those who produce the wealth.  Ominously, the Pashinyan administration has tapped Tsarukyan’s party for several ministerial posts.

The demonstrations, strikes, and road blockages since May 8 are some of the most significant developments of the past two months.  They indicate that more and more of our compatriots are giving up hope for capitalist solutions to the problems that capitalism itself has created.

The demonstrators have been accused of “obviously excessive expectations” (Hayots Ashkhar, 17 May), but their expectations are not excessive. So far, by all appearances, the protesters have been walking a fine line, advancing their demands forcefully, while resisting provocations to violence.  They are to be congratulated—and emulated.

Recent events have shown us once again that real change—irreversible change that will benefit the majority—does not come from elections.  Real change comes from broad-based struggle in the streets, offices, factories, neighborhoods, and social media.  The more unified and organized this struggle, the less the movement will be susceptible to violent provocations.

The events that led up to the ouster of the Republican Party from office of Prime Minister were only the latest of years of escalating grievances, from Buzand Street and Dem Em to Nairit, Electric Yerevan, and Khorenatsi Street, and from protests against corruption and domestic violence to farmers’ protests against mining pollution. And yet Armenia still lacks an active organization that brings together the demands of the majority poor and working class population of the country, of women, consumers, farmers, environmentalists, debtors, students, and opponents of homophobia.

Without a sustained organizational presence on the ground, each of the campaigns will fall far short of its goal, or will at best achieve only partial success, always in danger of being reversed.  As one foreign commentator recently observed:

When they don’t or can’t move people, demonstrations, marches and “occupy” movements are insufficient. It’s not enough just to be there: The movement has to join or become a political party; the street leaders have to become politicians.

If real change is to take place in Armenia, then it will be the work of a well-organized party that brings together a large part of the population within an organization with clear goals to replace capitalist rule by socialism, workers’ power.

If the events of April and May represent a victory, then the victory goes to the young people in the streets.  In the coming weeks and months, as the disappointments set in, these young people should remind themselves of the lessons they have learned:  people’s power can win the day.

The exhilarating events of April and May are only a glimpse of the kind of real change this new generation could achieve if it comes togetherunder a common program and organizes for the bottom ninety percent.

Markar Melkonian is a teacher and an author. His books include Richard Rorty’s Politics: Liberalism at the End of the American Century (1999), Marxism: A Post-Cold War Primer (Westview Press, 1996), and Philosophy and Common Sense (forthcoming from Bloomsbury Academic)..