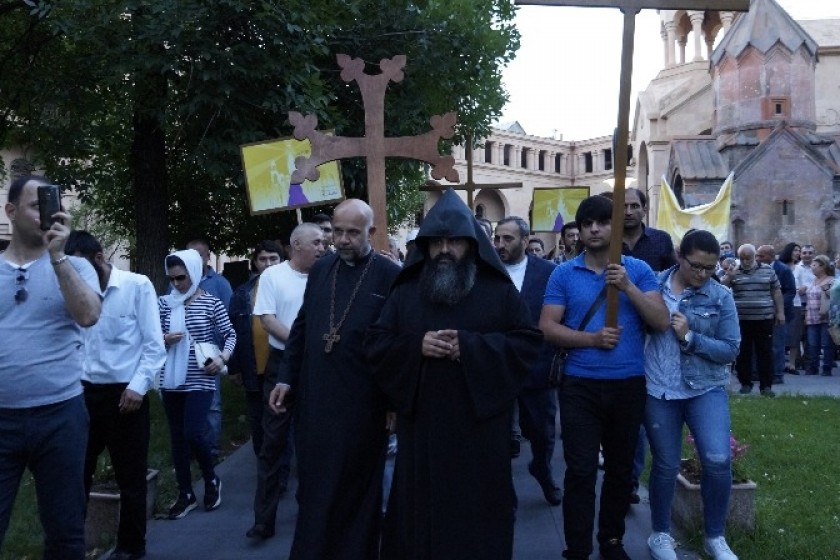 Hundreds demonstrated in the courtyards of the St. Anna and St. Katoghike churches in Yerevan demanding the resignation of Catholicos of all Armenians Garegin II.

The demonstrations were organized by a group calling itself “New Armenia, New Pontiff”.

As to why the demonstrators are calling for the resignation of Garegin II and new elections to replace him, Reverend Father Armen Melkonyan from Holland, who was stripped of his duties as a parish priest, told reporters that immediate reforms are need in the Armenian Apostolic Church but that many clergymen are afraid they’d be defrocked if they raised their voices.

“We want a patriarch who not only appears among the people on May 28, but on other holidays as well and on Khorenatsi Street,” Melkonyan said, referring to the May 28 Sardarapat celebration and the public clashes with police on Yerevan’s Khorenatsi Street following the seizure of a police building by the armed Sasna Dzrer group.

Melkonyan said that more people would rally around the movement to oust Catholicos Garegin II since Armenia must have a spiritual leader that enjoys the same level of popularity as Armenia’s new secular leader Prime Minister Nikol Pashinyan.

“Our dear prime minister was receiving great love and respect at Sardarapat. I looked for our patriarch, at his side, and saw a man, with his staff, that had the appearance of a rejected man. I found it very sad,” said Father Koryun, another clergyman participating in the protest.

The protesters, some carrying large crosses, then marched through downtown Yerevan.

Catholicos Garegin II has invited the protesters to meet with him tomorrow in Etchmiadzin.

karen 2019-01-25 04:30:35
I am laughing at these comments. Those who know what happens at Etchmiadzin don't talk. Those who do not know, talk. The fish stinks, from the head down.
Karapet 2019-01-25 04:30:34
time to get rid of the merchants of heaven and hell
666 is near 2019-01-25 04:30:34
The Catholicos is a heretic and a NWO 666 operative. The Armenian Orthodox Church is a member of the Universal Oriental Orthodox Family yet it has steered away from the fundamental doctrines that set Oriental Orthodoxy apart. His sermons and the dogma spewed from his and his close gang of antichrist clergy is NOT in accordance with Oriental Orthodox Theology but more akin to a spiritually lethal cocktail of Eastern 'Orthodox' (Greco-Russian), Roman 'Catholic' and peppered with 'Protestant' and new age abominations. His business plan is basically to pop up in any conference that promotes non-orthodox and antichrist ideas. He even joined the 'celebration' of 500 years of 'protestant reformation' held in Germany last year...
Irma 2018-09-27 00:01:07
It is about time to get rid of him. He is no good for Armenia and Armenians. I am very happy
Կարպիս 2018-06-09 07:16:15
Լուռ ու մունջ Կաթողիկոս է, գրեթե աներեվույթ: Համեմատելի չէ Վեհափառ Վազգեն Ա.-ին: Վրաստանի հայ եկեղեցական շինությունները քար ու քանդ արին, լռություն պահպանեց: Պոլսի եպիսկոպոսական ընտրություններին նույնպես: Արեվմուտքը զենքը թուրքերին է ծախում եվ աղանդները մեզ: Կարիք ունենք մի քաջակորով կաթողիկոսի, որ դեմ ելնի այս եվ այլ բոլոր անարդարությունների դեմ: Հարկ լինի նաեվ զենքով, ինչպես Արցախի Առաջնորդը:
Petros 2018-06-07 09:32:51
Dear Armenians, our first duty is to pray. We quickly forget that we are all sinners and are in need of God's mercy and forgiveness on a daily basis. The current Catholicos should never have been appointed to this most sacred office, so we are left with this problem. It will only be resolved when people fall on their knees and entreat God to intervene in this situation, as He most certainly did when He answered our prayers when He sent us Nikol! Pray always...God will take care of the rest.
Hagop 2018-06-07 00:44:32
The Armenian Apostolic Church is another corrupt oligarchy that needs to be overhauled. As the spiritual head of the first Christian nation, it must SPEAK OUT AGAINST CORRUPTION!