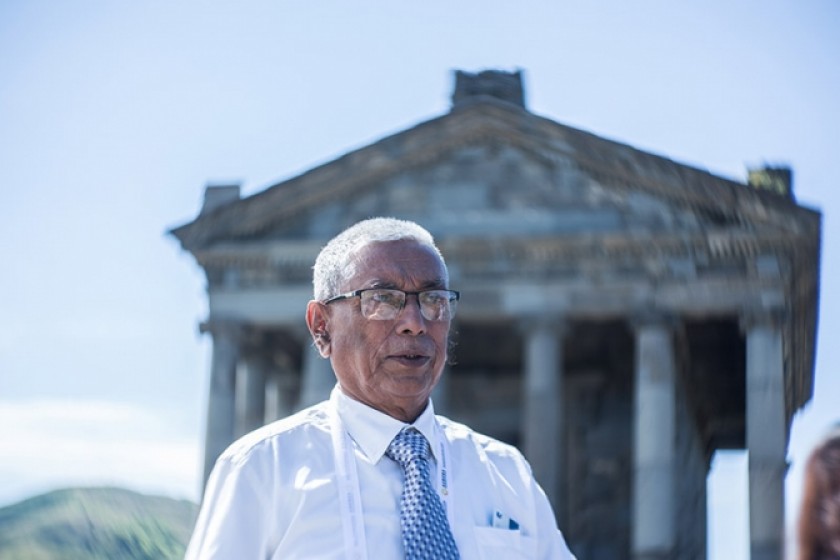 JUNE 10, 2018 – YEREVAN, ARMENIA – The third annual $1.1 million Aurora Prize for Awakening Humanity was awarded today to Mr. Kyaw Hla Aung, a lawyer and activist recognized for his dedication to fighting for equality, education and human rights for the Rohingya people in Myanmar, in the face of persecution, harassment and oppression. Kyaw Hla Aung was presented the 2018 Aurora Prize, granted by the Aurora Humanitarian Initiative on behalf of the survivors of the Armenian Genocide and in gratitude to their saviors, at a ceremony in Armenia. Kyaw Hla Aung was selected as the 2018 Aurora Prize Laureate among 750 nominations submitted from 115 countries.

Vartan Gregorian, Co-Founder of the Aurora Prize and Member of the Selection Committee, commended Mr. Aung, stating: “As we remember the horrors and violence experienced by Armenians – especially women and children – on the deportation route during the Genocide, it is with a great sense of responsibility that we stand ready to support Kyaw Hla Aung’s advocacy work that will hopefully lead one day to the enactment of national and international policies to protect and defend the vulnerable. Kyaw Hla Aung is doing tremendous work, at great risk to himself, and exemplifies the far-reaching impact one person can have to galvanize a movement, and to help individuals transform their lives.”

As the 2018 Aurora Prize Laureate, Kyaw Hla Aung will receive a $100,000 grant and the opportunity to continue the cycle of giving by donating the accompanying $1,000,000 award to organizations of his choice. He will donate the award to three international organizations that provide medical aid and assistance to refugees in Myanmar:

Kyaw Hla Aung has been working tirelessly for decades, using his legal expertise to appeal for basic human rights for the stateless Rohingya people. His commitment to fight for justice for the hundreds of thousands of Muslim refugees in Myanmar persecuted by the government, and for the children who no longer have access to education, remains stronger than ever. He sacrificed a total of 12 years in prison as a result of his mission, at huge personal cost to his own family.

On being named the 2018 Aurora Prize Laureate, Kyaw Hla Aung said: “There are severe restrictions on my people. They have lost their courage and faith in themselves, have become illiterate, and, as a result, are penniless. It has been heartbreaking to see my community suffer from such discrimination. The support of the Aurora Prize serves as important recognition for all of the Muslim victims of human rights violations, as the plight of the Rohingya people continues to become more visible to the international public.”

“Kyaw Hla Aung’s work personifies the spirit of the Aurora Prize. He demonstrates the exceptional impact an individual can have in fighting injustice that often seems unbeatable, and inspires us to consider how a brave step forward to support the world’s most vulnerable people can create impact beyond measure,” said Mary Robinson, Aurora Prize Selection Committee Member and Former UN High Commissioner for Human Rights.

Kyaw Hla Aung was congratulated by Dr. Tom Catena, who was awarded the 2017 Aurora Prize for his exceptional commitment to providing urgent medical care to the 750,000 people in the war-torn Nuba Mountains of Sudan. He said: “The Aurora Prize has created a true light for our people in Nuba, and has helped rebuild the resilience of our community, ultimately to keep people alive. I am proud to share the Aurora Prize mantle with such a selfless humanitarian as Kyaw Hla Aung. I congratulate him on receiving this award and applaud his incredibly selfless efforts fighting for such a noble cause.”

The Aurora Prize Co-Founders, Vartan Gregorian, Noubar Afeyan and Ruben Vardanyan, and the organization’s esteemed Selection Committee members join in congratulating the exceptional efforts of Kyaw Hla Aung, and the 2018 Aurora Humanitarians. As modern-day saviors who are putting their own lives at risk to save others, they serve to inspire the global community to step up embrace a commitment to our shared humanity.

About the Aurora Humanitarian Initiative

Further information is available at www.auroraprize.com

About the Aurora Prize for Awakening Humanity

The Aurora Prize for Awakening Humanity is a global humanitarian award established to recognize modern day heroes and the exceptional impact their actions have made on preserving human life and advancing humanitarian causes in the face of adversity. On behalf of the survivors of the Armenian Genocide and in gratitude to their saviors, an Aurora Prize Laureate is being honored each year between 2015 and 2023 (in remembrance of the eight years of the Armenian Genocide 1915-1923) with a US$100,000 grant as well as the unique opportunity to continue the cycle of giving by nominating organizations that inspired their work for a US$1,000,000 award.

Further information is available at www.auroraprize.com