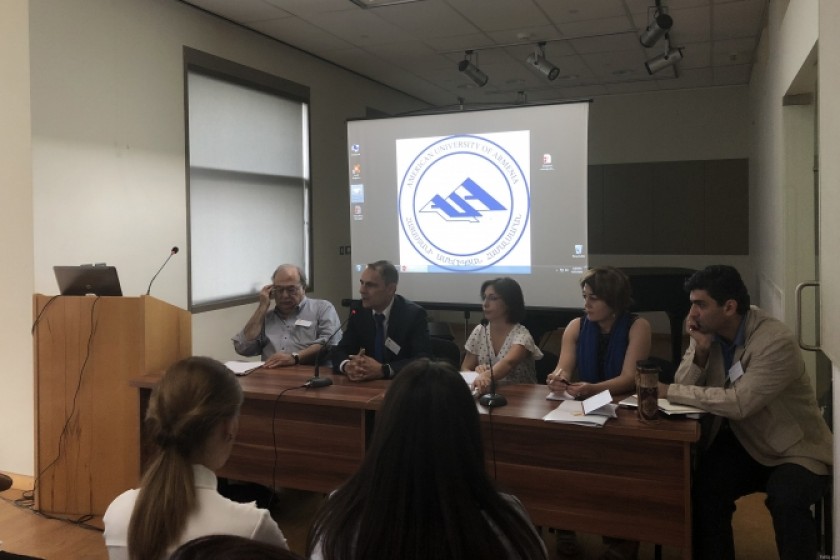 On Friday, June 22, 2018, I attended the Armenia 2018: Realities and Perspectives International Conference, hosted by the American University of Armenia in Yerevan. The conference presented panels on the most pressing political, social, and economic issues currently facing Armenia as well as the dominant philosophical debates of the modern day, with differing insights offered by specialists.

As a member of what is considered the Armenian diaspora, I was especially intrigued by a panel titled "Armenia - Diaspora." I have participated in many discussions in the United States pondering the responsibility of the diaspora toward of Armenia and the difficulty of maintaining an Armenian identity outside of the borders of an Armenian nation. I sat in on the panel anxious to hear the other side of these debates, and whether Armenians residing in Armenia share my urgency to engage the diaspora in the development of Armenia.

A recurring theme that consistently reemerged throughout the panel was the issue of defining the diaspora. To me, the answer seemed simple. The diaspora is the space occupied by Armenians outside of the homeland--that is, modern-day Armenia. However, the panelists' speeches complicated the issue by placing the idea of the homeland in question.

For instance, Vahe Sahakyan proposed that the diasporan identity is a multi-faceted one forged by the interaction between different cultural spaces, including the countries in which diasporans reside--an inherently transnational identity. Moreover, Syuzanna Bareghyan, Sona Nersisyan, and Lusine Tanajyan revealed that the understanding of what constitutes the homeland differs based on where a diasporan Armenian lives. While an Armenian living in Tehran may look to Armenia as the homeland, an Armenian in Los Angeles is more likely to considered the United States home. Aleksandr Gevorkyan even proposed that constructed perceptions of Armenia in the diaspora shape diasporan behavior toward the country of Armenia more so than reality.

The bond between the diaspora and Armenia is one I have taken for granted as fact. For years, the diaspora has defined itself in relation to Armenia. Without this everlasting connection, the diaspora is lost, flailing, without purpose or meaning. The very identity of the diaspora rests upon the existence of a home outside of itself to which diasporans can turn as the ultimate realization of the preservation of Armenian cultural roots.

The panelists did not suggest that current understandings of the homeland should be overhauled. Nonetheless, I felt provoked to reconsider my definition of the diaspora, and with that, the motivations that should collectively drive the diaspora. Can diasporans find a home outside of Armenia? If there is no definite homeland, then to what does the diaspora owe its allegiance and work?

Armenians have built communities throughout the world, each one uniquely vibrant and diverse. They have produced artists and scientists and philosophers and visionaries. They have drawn from various cultural traditions to invent unique foods, costumes, and dialects. Most importantly, they have developed distinct ways of expressing connection to a shared Armenian heritage. Considering the rich and complex history and progression of the Armenian diaspora, could not diasporans discover purpose and meaning within this process of community formation? Perhaps we can change the discourse of home-seeking in the diaspora to one of home-building where diasporans reside. This way, homeland is not an ideological construct, but the physical reality of any place where Armenians live and create and thrive.

At the end of my reflections upon the "Armenia - Diaspora" panel at the Armenia 2018: Realities and Perspectives conference, I remain less sure of how to define the diaspora. However, I feel inspired to pursue a new understanding of homeland, one that empowers diasporan Armenians to take pride in their unique identity and invest in the development of a prosperous and powerful Armenian diaspora.

Khachig Toloyan is a professor of English and Comparative Literature in the College of Letters at Wesleyan University in Connecticut and a founder and editor of Diaspora: A Journal of Transnational Studies. Vahe Sahakyan is a researcher at the University of Michigan-Dearborn interested in the study of nationalism, race, ethnicity, and diaspora. Aleksandr Gevorkyan is Assistant Professor of Economics at the Department of Economics and Finance of the Peter J. Tobin College of Business at St. John's University in New York City. Syuzanna Barseghyan is an associate fellow in the Social/Humanitarian Developments and Security program at the Armenian Institute of International and Security Affairs interested in ethnicity, diaspora, and anthropology. Nona Shahnazarian is Associate Researcher at the National Academy of Sciences in Yerevan and the Center for Independent Social Research in St. Petersburg.

Lillian Avedian is an intern at Hetq with the Armenian Assembly of America summer internship program. She is a student at the University of California, Berkeley studying Peace and Conflict Studies with a concentration in Human Rights and Armenian Language and Literature.

Noric Dilanchian 2019-01-25 08:30:34
Lillian, thanks for writing your report. To assist you, here is a 2018 literature list on the Armenian diaspora. It's in a rough order of usefulness. 1. Kopalyan, Nerses (2018, Jan) Bound by Duty? The Diaspora’s Normalization of Armenia’s Political System https://www.evnreport.com/politics/bound-by-duty-the-diaspora-s-normalization-of-armenia-s-political-system 2. Galstyan, Areg (2018) Armenians should become a transnational political nation | #diaspora - Mediamax.am https://mediamax.am/en/column/12780/ 3. Atanesian, Grigor (2018) In wake of Armenia's peaceful uprising, diaspora's clout is questioned | Eurasianet https://eurasianet.org/s/in-wake-of-armenias-peaceful-uprising-diasporas-clout-is-questioned 4. Cavoukian, Kristin (2018) Can the Armenian Diaspora Bring a “New Management Culture” to Armenia? | PFA Blog https://pfarmenia.wordpress.com/2017/10/04/management-culture/ Also, here is a bibliography book you can download. • Bibliography Handbook on Diaspora and Transnationalism DOWNLOAD PDF from http://www.grfdt.com/PublicationDetails.aspx?Type=Books&TabId=25 Khachig Toloyan who spoke at the conference you overview is a world leader on the subject of diasporas, I listen to him closely. Since he started the Diaspora journal there's been a growing body of writing on the subject. I expect it will grow exponentially due to the increasing international movement of people, including between first world countries (like Australia and the United States) forming their own growing diasporas.