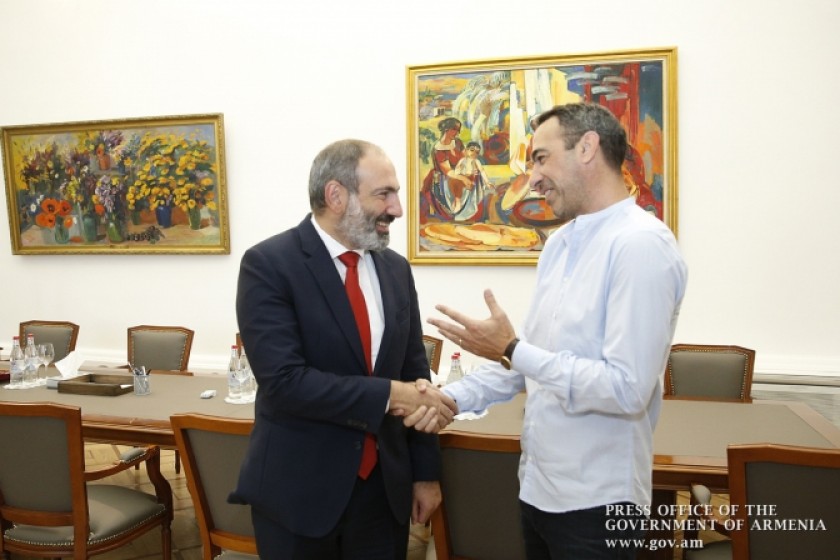 Youri Djorkaeff to Pashinyan: “You Changed the Face of Armenia”

On July 9, in Yerevan, Armenian Prime Minister Nikol Pashinyan hosted legendary French-Armenian footballer Youri Djorkaeff, who was part of the French national squad that won the 1998 World Championship  and the 2000 European Championship.

Djorkaeff was in Yerevan to play in a match pitting two teams; one comprised of legendary footballers from South America, and the other from veteran players from Europe.

“I am happy to welcome you to the government of Armenia. You may know that throughout your career all Armenians were very proud of you and wanted to assist you with their kind wishes and emotions. I am glad that you are here, and I hope that your ties with Armenia will be maintained, and we will be able to cooperate so that you could help promote football in Armenia, develop infrastructures, and inspire the rising generation to engage in the football career,” Prime Minister Nikol Pashinyan said according to a government press release.

Youri Djorkaeff noted that he has already been in Armenia for several times, including as part of delegations led by French Presidents Jacques Chirac and Nicolas Sarkozy. “And this is very important for me as everyone knows that I have Armenian blood in my veins. What you did recently was wonderful, indescribable; you inspired many Armenians, you changed the face of the country, you gave hope that was inexistent before that. And this is fundamentally different because it proves that there is always a chance to do something right. That is why I want to know which way I can be of service to the country. I want to take my step, too. My foundation stands ready to initiate new projects in Armenia,” Djorkaeff said, adding that he is currently cooperating with UNICEF, and is willing to assist Armenia in that capacity, too.

Nikol Pashinyan thanked the French-Armenian footballer for his kind remarks about the “velvet” revolution and welcomed his new initiatives. The Premier expressed the belief that Youri Djorkaeff’s projects could help promote football in Armenia.