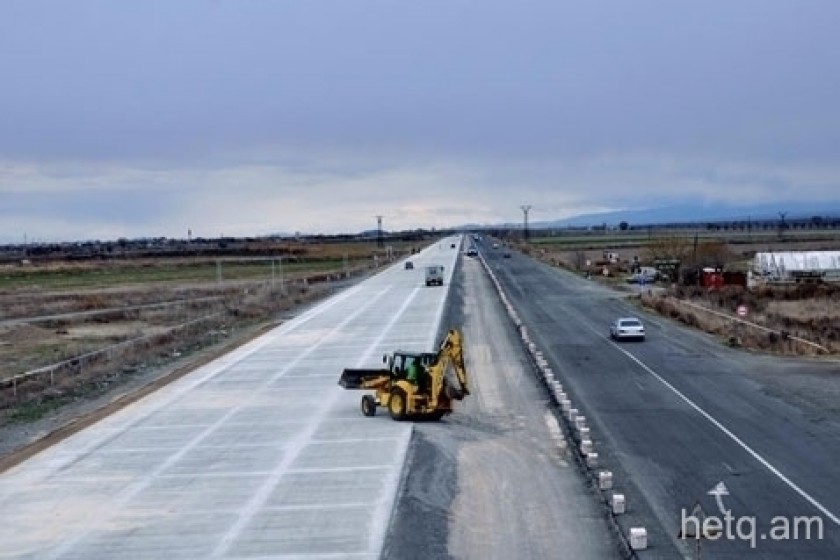 Armenia’s Prosecutor General’s Office has launched a criminal investigation of abuses and mismanagement related to the North-South Road Corridor construction project that amount to AMD 23.553 billion ($48.7 million) in losses between 2009 and 2018.

Revelations of widespread mismanagement, poor construction practices, and unjustified changes to the original project blueprints were contained in a report published by the Ministry of Transport, Communications and IT.

The report also charges government officials participating in drafting and conducting the project with agreeing to postponing construction deadlines and lengthening the contracts to those offering consultative services. These companies wound up being paid much more than originally planned for.

In addition to the financial losses accrued, the roadway was never finished on time, and failed to meet its original goals of facilitating interstate commerce and offering safe and convenient travel to citizens.

The report says that there was little quality control regarding the cement used on the Yerevan-Artashat and Yerevan-Ashtarak portions of the highway, leading to poor road quality.

According to a  statement released by the Prosecutor General’s Office, charges of “Abuse of Official Authority” (Criminal Code, Article 308) have been filed.

HAGOP 2019-01-25 08:30:37
DO NOT GIVE ARMENIANS ANY MONEY TO DO ANYTHING!!!! THE AMOUNT OF GREED, CORRUPTION AND NEGLIGENCE IS OUT OF CONTROL!!!!! I AM ASHAMED TO CALL MYSELF ARMENIAN!!!!! GIVE THE MONEY TO A NON-ARMENIAN COMPANY TO THE ANY JOBS IN ARMENIA!!!!!!!! PATHETIC!!!!!!!!!!!!!!
Ricardo 2019-01-25 08:30:37
Yeah, Raffi...the Spanish and the Armenians shared the graft. And who was supposed to keep tabs on this all - the Armenians.
HAGOP 2019-01-25 08:30:37
@RAFFI, no excuse homie! ARMENIANS ARE STILL THE MAIN OVERSEERS AND 100% RESPONSIBLE!!!!! ABSOLUTELY PATHETIC!!!!!!!!! LOOK AT ALL THE SCUM BAGS HETQ INVESTIGATES ON THIS WEBSITE EVERY WEEK!!!!! STEALING!! MISMANAGING!!! ILLEGAL LAND GRABBING!!! ILLEGAL!!! ILLEGAL!!! ILLEGAL!!! WHEN ARE ARMENIANS GOING TO LIVE AS CHRISTIANS?????????
mahmouzian 2019-01-25 08:30:37
during construction you coul see that no supervision existed the worker where just hangin g around. the fault is the Armenian government of that time with all their study and they pocketed the money .that bunch of people should be prosecuted.the only place for them is jail and it is very easy to prove it.the sad part is not a single agency is to be trusted they are all crook sssssssssand they all give us haistan haistan.deal with one haistandji in Armenia America france they are all the same shit
Krikor 2018-09-08 15:17:56
Not just responsible officers. To date, he is the makedonski project manager, Mafiosi, B.D. and Spanish employees, S.Z. They fill their private wallets due to the bad practicces.
Raffi 2018-09-06 12:31:57
@Hagop -> feel free to be ashamed of your Armenian identity all you want, however, the money WAS given to a foreign company: Corsan is a Spanish contractor :P
mahmouzian 2018-09-06 06:01:00
I took that road 50 times and was discusted buy the work being done .prosecuted all the big guy involved they are the guilty one .they stole . and the worker did not now what to do .the guilty are the government of that time .bunch of crooks.hang them all clean the country.of those bastard
Valod 2018-09-06 00:02:45
Armenians should be ashamed of themselves for wasting so much money. We will never be successful as a country. Sad. No Armenian can be trusted anymore.
Stephan Dragon 2018-09-05 16:41:27
Oh, if you prosecuted that in Germany, there would be no construction companies and very little administration!