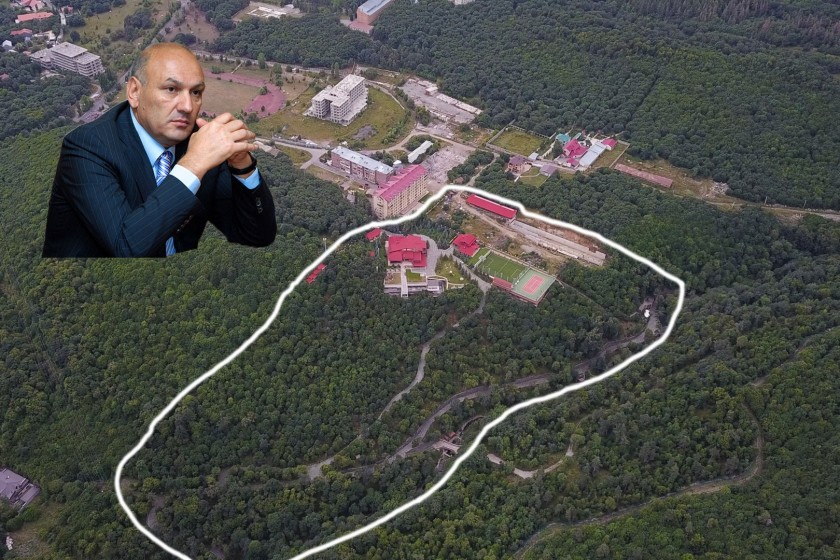 The family has built several buildings on the land.

Around 2.5 hectares of land, where the buildings stand, are owned by the Khachatryans, while 9.5 hectares of forest were leased from HayAntar (ArmForest) SNCO for 50 years.

The house and adjacent structures are built in a specially protected area, earmarked for leisure purposes. Armenia’ Land Code describes such areas as public zones rather than private spaces.

When Hetq was videotaping there, a new building was being constructed without a building permit. After Hetq sent a query to the Tzaghkadzor mayor, the town’s municipality fined the Khachatryans for 200,000 drams.

According to state real estate documents, Gagik Khachatryan's daughter, 22-year-old Angela Khachatryan has owned 0.5 hectares of land located at 20 Khachik Muradyan Street since September 2016. Before that, it belonged to Hayk Khachatryan, Gagik Khachatryan’s cousin, since 2008.

In other words, they should be used in the public interest, while in this case they are not.

The 18 Khachik Muradyan address, which consists of more than two hectares, is registered in the name of Laura Yepremyan, Gagik Khachatryan's wife.

Mayor Harutyunyan says such a building, constructed without a permit, might be fined for 2-3 million AMD. If the building is not legitimized, the court will demand to dismantle it.

As for the forest lands of 9,42 hectares controlled by the Khachatryans, the lease agreement signed between Hayantar and Khachatryan’s wife in April 2010 mentioned reforestation as an aim: the Khachatryans had to plant trees in the area.

Lusine Hakobyan, spokesperson for the Forest Committee, informed Hetq that  based on our inquiry, on September 6, the area was inspected, and the inspection showed that the tenant  has planted 8,500 trees.

Hetq tried to get clarification from Gagik Khachatryan’s son, Artyom Khachatryan. The latter said his father was out of the country, but that his representatives would answer our questions.

Shushan, an employee of the Galaxy Concern, one of the Khachatryan’s companies, says it’s  the building contractor to be blamed for the missing construction permit, since they did not finalize the construction permit earlier, as a result of which the owner was fined 200,000 drams by the Tzaghkadzor Municipality.

After registering the violation, a petition was filed with the municipality to legalize the unauthorized building.

The municipality has already issued the permit for legalization, and the Khachatryans have to pay five million drams to the state treasury. Currently, the building is legalized, with a certificate of ownership.

This is just one episode of the Khachatryan family’s various activities. Hetq will soon publish the findings of its investigation of the family’s business activities.