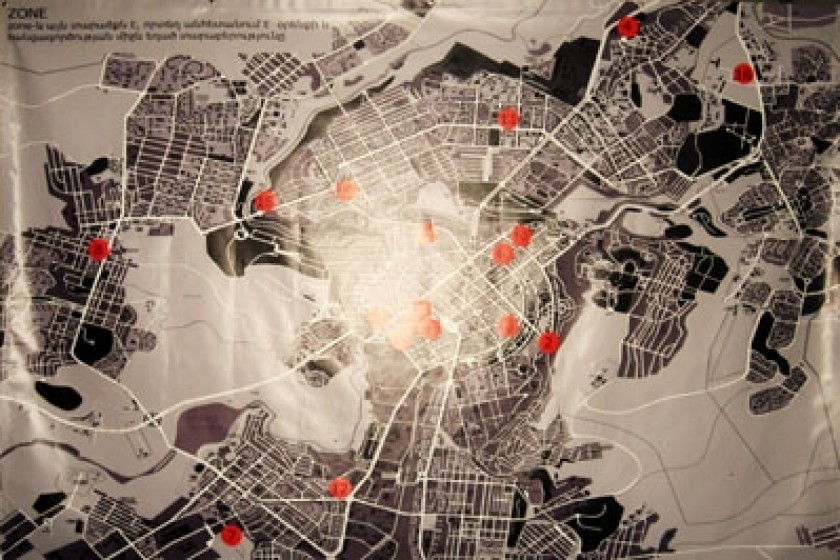 Russian avant-garde theorist Sergei Tretyakov in the first 1928 issue of the journal Novyi LEF (New LEF) writes: "LEF questions the aesthetic intoxicating function of all of art. LEF is in favor of methods that accurately record the facts. LEF regards literature of uninventive facts more highly than beautiful inventive literature."
It is in this context that the Armenian art collective Art Laboratory's exhibit "Bare Life," which opened on Sept. 5 in Yerevan, is displayed.
"This exhibit of political art was created from the concern of the situation that arose in the post-election period. Sentiments of suffering and hopelessness have increased in society, which has led to an obvious increase in suicides and murders. Also increased is the number of citizens fleeing the country, which places into doubt the existence of the state and society. We've tried to attribute meaning to this current state of affairs through the Bare Life exhibit," reads the Art Laboratory's daily paper Horizon.
The exhibit is minimalist: the first thing that strikes you are the four slideshows, which depict the cafe Aragast, the Armenian parliament building, the place of the events of Mar. 1, 2008; and an area just outside the city known as the place where people go to settle a score.
These images depict, according to the organizers, the dates and descriptions of terrifying and crucial murders between 1998 and 2012, followed by the value of the country's minimum Consumer Price Index in the second quarter of 2012 (62,000 AMD; approx. $150 USD).
The "Zone" map where the aforementioned scenes of the crime are highlighted with red circles is distinctive from a visual perspective. All this is followed by information about recorded suicide attempts and murders in Armenia.
"The exhibit is dedicated to the situation in Armenia today, when man is cut off from a social state and is found in an animal state, where he is defenseless [naked]. The exhibit contains facts which prove this 'bareness' — the chronicle of murders, suicides, and so on. The exhibit was carried out with the assistance of the Open Society Institute," said one of the organizers, Artur Petrosyan.
According to one of the other organizers, Edgar Amoryan, the exhibit can also be called "Post-Election Apathy," which, according to him, is a consequence of not only the murders that have happened, but also the rise in suicides.
The exhibit is on display till Sept. 8.