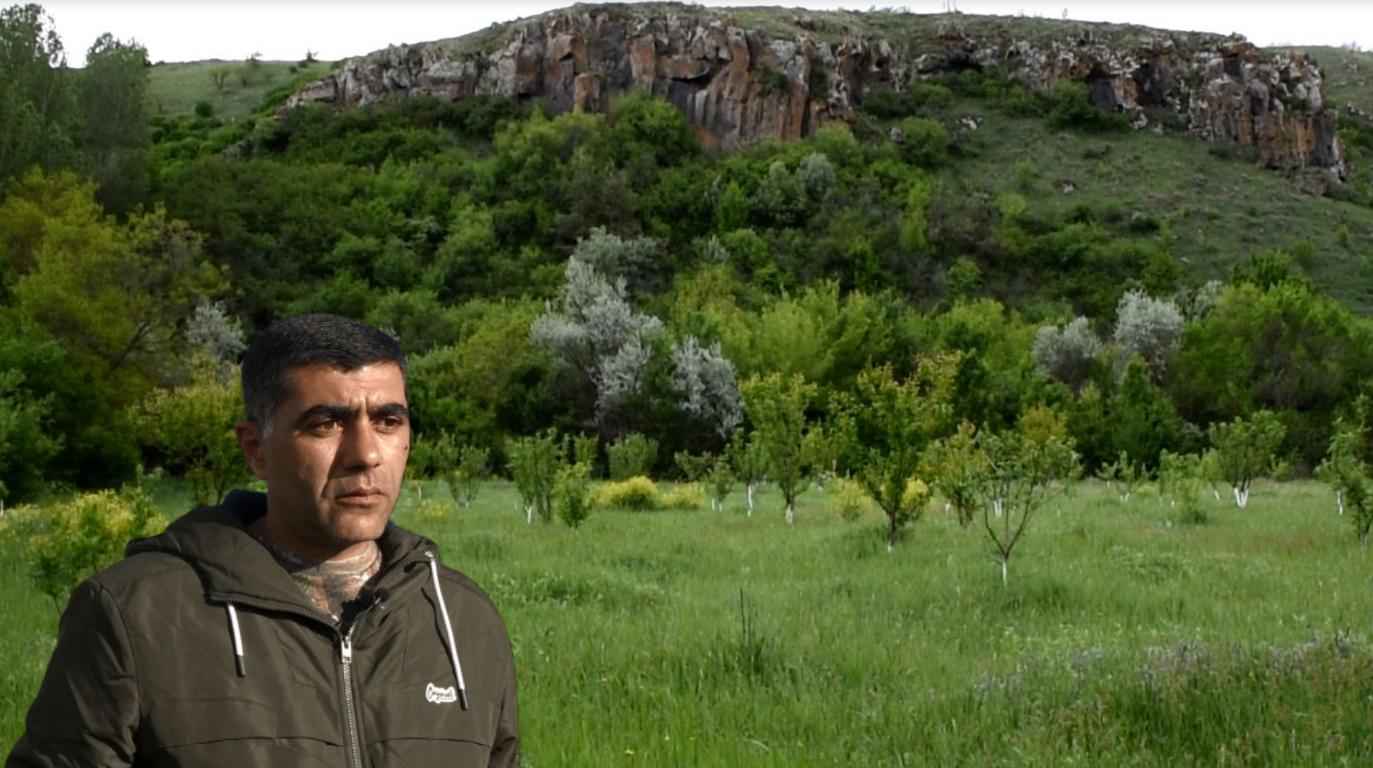 Hetq has started to investigate leasing contracts of state-owned forest lands in Armenia.

Our investigation has uncovered a number of dubious lease deals where companies and officials with ties to forestry officials have gotten below market prices.

For a bit of context, forests cover about 11% of the territory of Armenia, while historically the forest covered up to 40% of the territory of what is today the Republic of Armenia. Forests in Armenia are located extremely unevenly, with 62% of those located in the north-east, 36% in the south, and only 2% in the central parts of the country. (Armenia-UNDA Local Workshops Report, Oct./Nov 2014)

These lease deals were made when Arkadya Arshakyan ran the Sisian Forestry Unit. In effect, he leased forest land to himself and to companies linked to him when he ran the unit.

Since 2009, Arkadya Arshakyan has been leasing a 0.2-hectare plot of land opposite the forestry unit office in Sisian. The lease is for forty years and he pays 110,000 drams ($231) per year.

These tracts were leased to Arshakyanner Energy LLC, a company founded by Arshakyan’s son Arman in 2006. (Arkadya Arshakyan took sole control of the company shares in 2010).

It comes as no surprise that Arman Arshakyan has been director of the Sisian branch for the past three years, taking over when his father left the post.

Fruit trees have been planted on the leased lands in recent years. Another part has been designated a rest and relaxation zone for tourists.

Arman Arshakyan sees no conflict of interest in the fact that he runs the local forestry unit and that his father has leased lands managed by the unit. 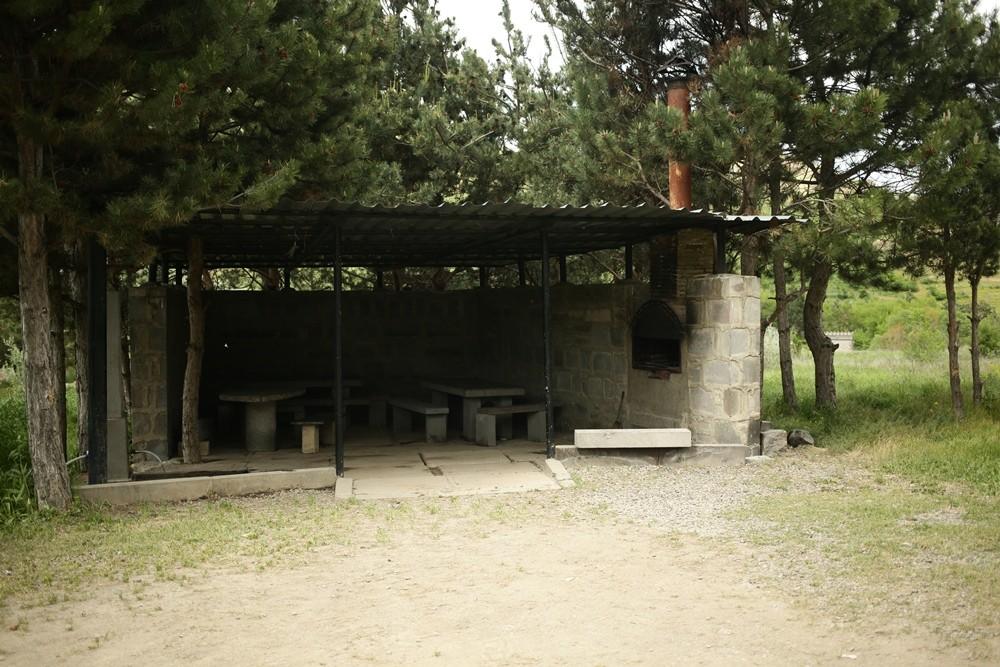 Commenting on the low lease rates of these tracts, Arman Arshakyan says that prices in the past were different.

He says the stone and concrete structure in the above photo was built to honor the memory of a fallen Artsakh War veteran and that the forestry unit could not prevent its construction. 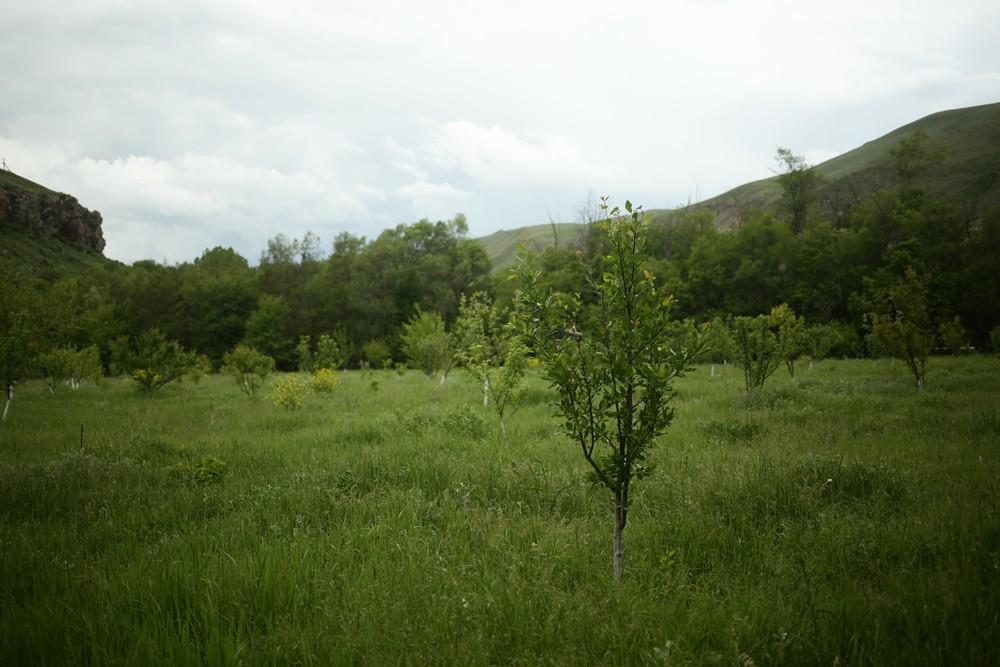 Arshakyanner Energy Company has exploited the Ishkhanasar volcanic basalt mine in Syunik Province, with the right of subsoil use under the order of Acting Minister of Energy and Natural Resources Garegin Baghramyan to 2019. In January it was stopped. The basis for the Acting Minister’s decision was the 2018 administrative proceeding against the company in November and the violations discovered thereby. The company has accumulated 1.3 million drams of lump sum utilization fees, as well as 365,000 drams for environmental protection, and has not been submitted reports to the authorized body by 2017. The grounds for warning did not eliminate the deadlines. The company also had fishery rights  on the Vorotan River for 2011-2014. 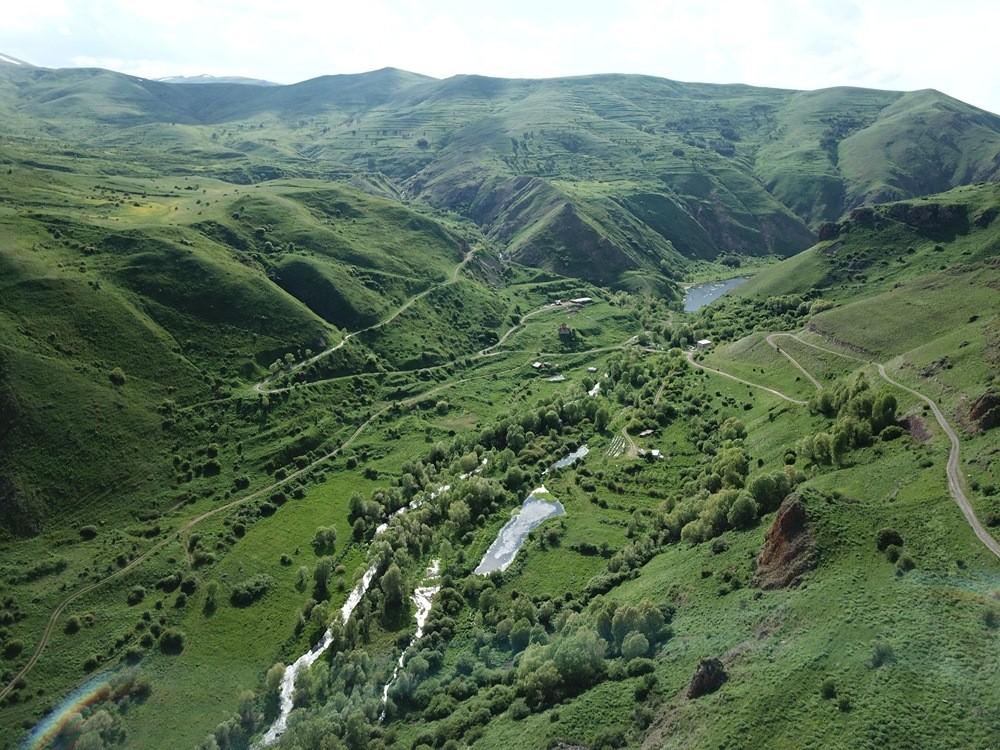 Zor-Zor LLC leased lands on both sides of the river

Zor-Zor LLC, the founder-shareholder of which is Sisian registered Davit Davtyan, leased seven hectares from the Sisian Forestry Unit, paying 84,000 drams. The company planned to build a nursery and run a fish farm on the Vorotan River, which is surrounded by forestry land. The contract expired in April 2018. According to Arman Arshakyan, the tenants did not use the area.

However, before this, HayAntar petitioned the Sisian court in November 2015,  asking that it seize 616,233 drams from Zor-Zor in payment of its HayAntar debts. The court has issued a payment order that has not been appealed by the company.

In order to lease forest lands, the government  set a minimum lease rate in 2010.

In Syunik, the minimum rate per one hectare of land to be used for recreation purposes is 216,000 drams annually.

Using this rate, HayAntar should have charged a rate of 1.879 million drams per year to Arshakyanner Energy for the 8.7 hectares it leased, and not the 105,000 drams. It seems that HayAntar is in no hurry to review the above contract despite the government’s 2009 guideline.

The 0.2 hectares of land leased by Vahagn Hayrapetyan, a hotel businessman in Goris, is located several hundred meters from the forestry office, on the sides of the Goris-Yerevan roadway. Nothing has been built on the land, leased until 2035 for recreational purposes. Vahagn Hayrapetyan pays 60,000 AMD annually for that land plot. Hornbeam, oak and pine trees grow in the area. 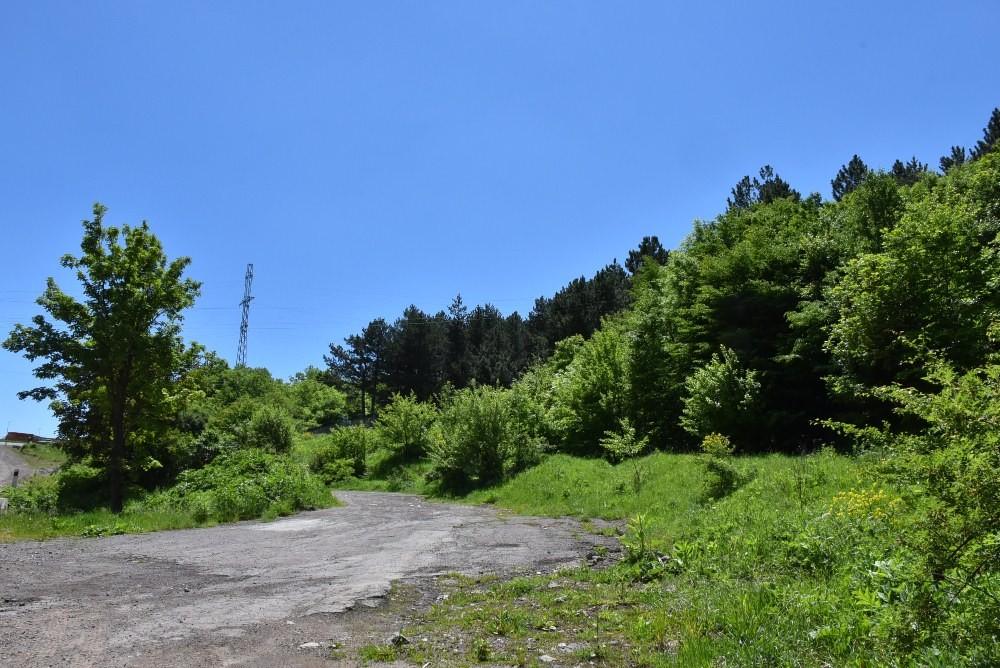 Land leased by Vahagn Hayrapetyan in the Syunik Forestry Unit

The Syun Educational-Consulting NGO has leased 1.2 hectares of forest areas located along the Halidzor-Tatev roadway. Syun pays an annual rent of 260,000 drams for the territory. There are pavilions in the wooded area. Syun was founded in 2000, in Goris. Karen Ter-Mkrtchyan, who heads the executive body of the organization, is associated with "Delta-Gloub" LLC. The NGO and  the company are registered at Karen Ter-Mkrtchyan's Goris address on Mamikonyan Street. 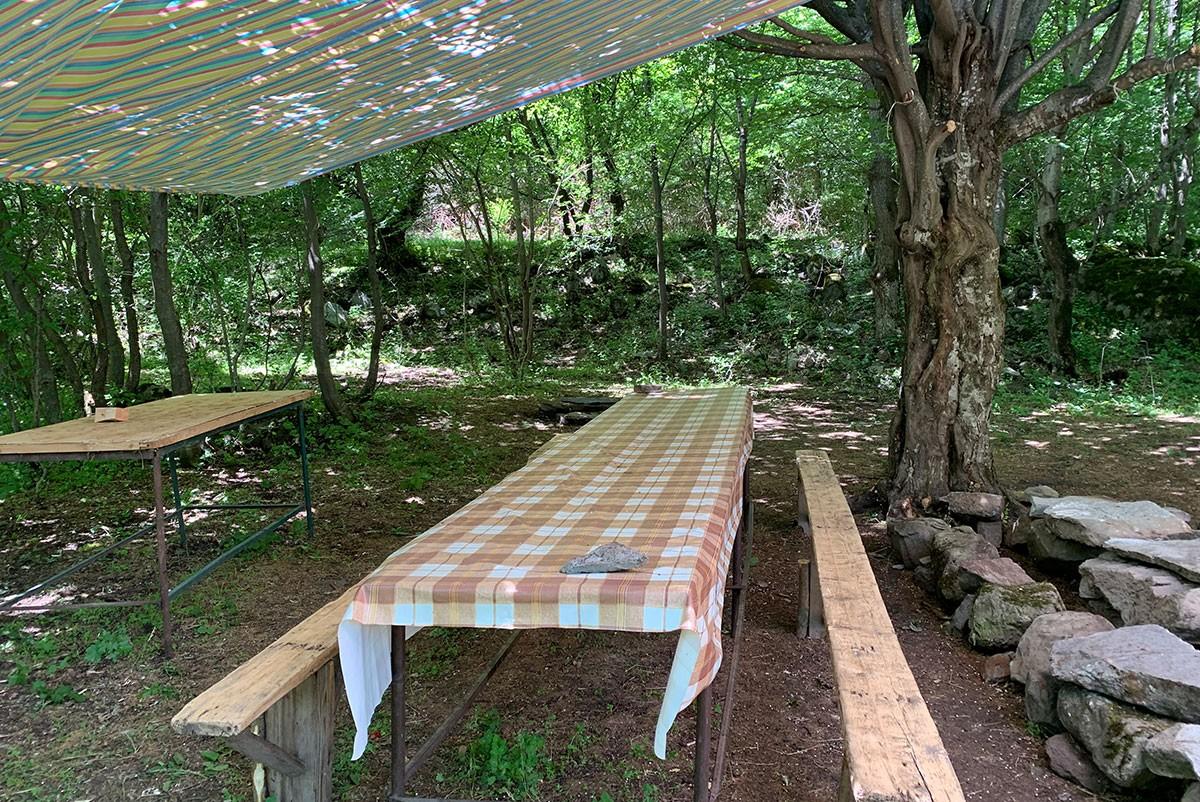 It turns out that Syun NGO subleased the land to Halidzor resident Albert Andranikyan. People can pay a certain amount to use the area for relaxing and picnicking.  Andranikyan told Hetq that local families and schoolchildren visit the area, and that he personally monitors the site for fires and garbage. The area is partially fenced, and gates have been installed.

"It's a good thing, I've come here, we have to keep order, so that people come and go normally," said Albert Andranikyan.

The current tenant says he is not familiar with the activities of the NGO. Andranikyan claims he merely  talked to Karen Ter-Mkrtchyan and got the land. He did not want to say how much he’ll be paying Syun NGO, saying that they haven’t agreed on a specific price yet. There are hornbeam, oak, and sycamore trees in the area.

The 0.6-hectare forest area rented by Anushavan Aghabekyan is located on the 3.3th km of Halidzor-Tatev highway. Good until 2036,  the annual lease price is 130,000 drams. During our visit, Aghabekyan was on the site overseeing the construction of a cottage and an adjacent building. Armen Ishkhanyan, Head of the Goris Forestry Unit, was on site during the construction. 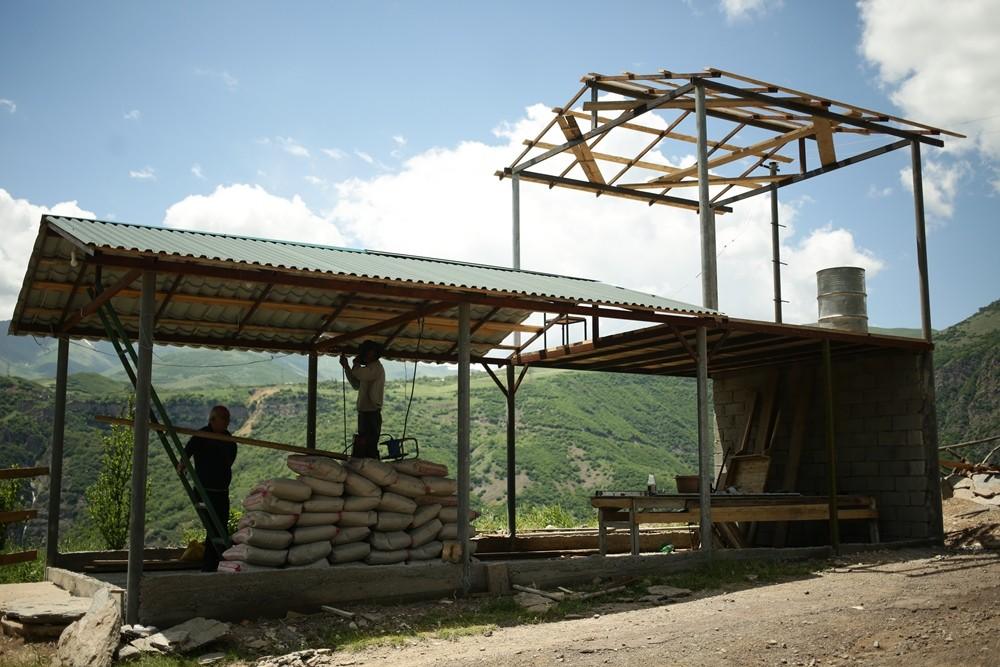 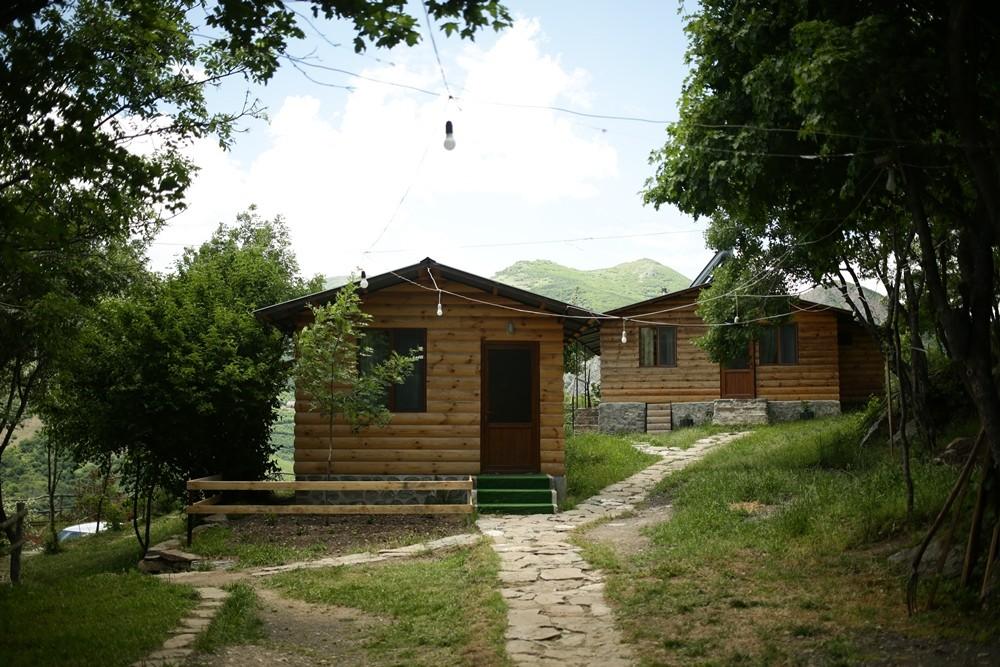 There are two more tenants at the beginning of 80 hectares of forest lands in the administrative borders of Halidzor community. Hakob Asatryan and Vahagn Hambardzumyan rented 0.5 hectares and 0.055 hectares of land, respectively, from the Syunik Forestry Unit. The sites are not being used for the stated purpose of a recreational area. Nevertheless, the tenants pay 108,000 and 60,000 drams every year. 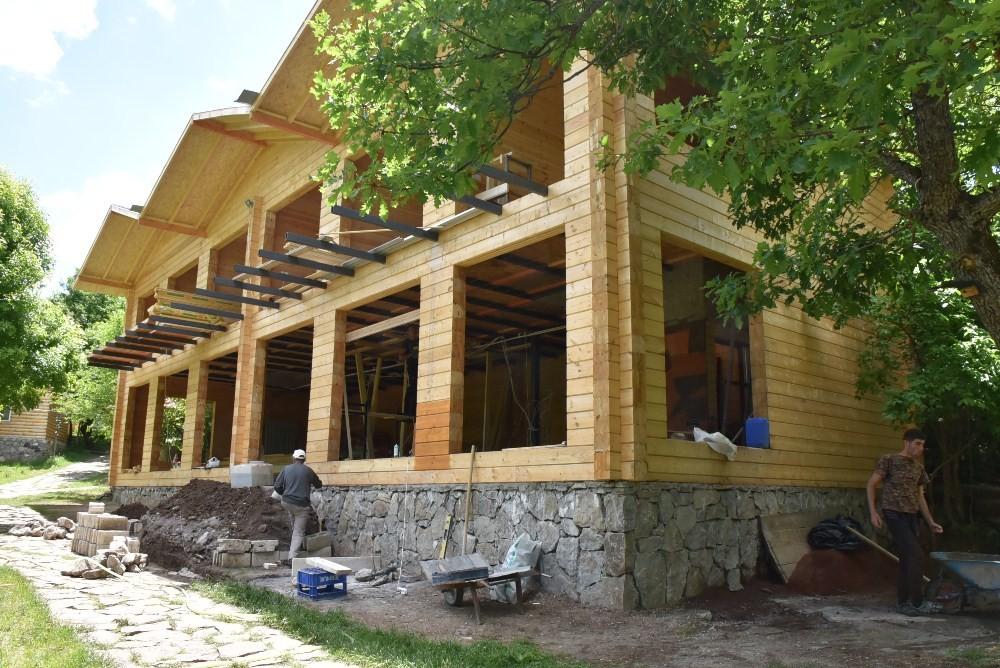 The Harsnadzor Resort Area is located on a 2.5 kilometer stretch of roadway between the communities of Halidzor and Tatev. The land is within the Syunik Forestry Unit. Some ten cottages have been built on the 0.8-hectare site which has a controversial history according to the head of the Syunik Forestry Unit. In the past, the site and an adjacent 80 hectares of forested land belonged to the forestry unit. Later, it became Halidzor administrative property.

Forest Committee Deputy Director Ruben Karapetyan told Hetq that at issue is the 0.8 hectares of the Harsnadzor Resort Area. Karapetyan says that they leased two hectares of land, on the left and right of the road, to the Syun NGO. Later, the Syunik community head wrote to the HayAntar SNCO, noting that 0.8 hectares belonged to the community’s Halidzor settlement. He attached a statement to the effect from the State Cadastre. Subsequent to this, HayAntar voided the contract regarding the two hectares and entered into a new contract with Syun NGO for 1.2 hectares that’s located on the right side of the road from Halidzor to Tatev.

Comparing the decisions of the Tatev Municipal Council and the government, it turns out that the state lands of the left part of the road leading to the settlement of Halidzor in Tatev were turned over free of charge to the Halidzor community in 2006.

The government approved the administrative borders of Halidzor community based on Decision  515 N of 2006 and decided to transfer the state-owned land plots to the community free of charge by the community.

Surprisingly, the forested plots were zoned for agricultural use. In 2019, the Tatev Municipal Council placed five hectares of the same land up for auction community for auction in order to lease one hectare for only 310,000 drams per year.

In effect, forested lands were transferred to the community under the guise of agricultural lands. 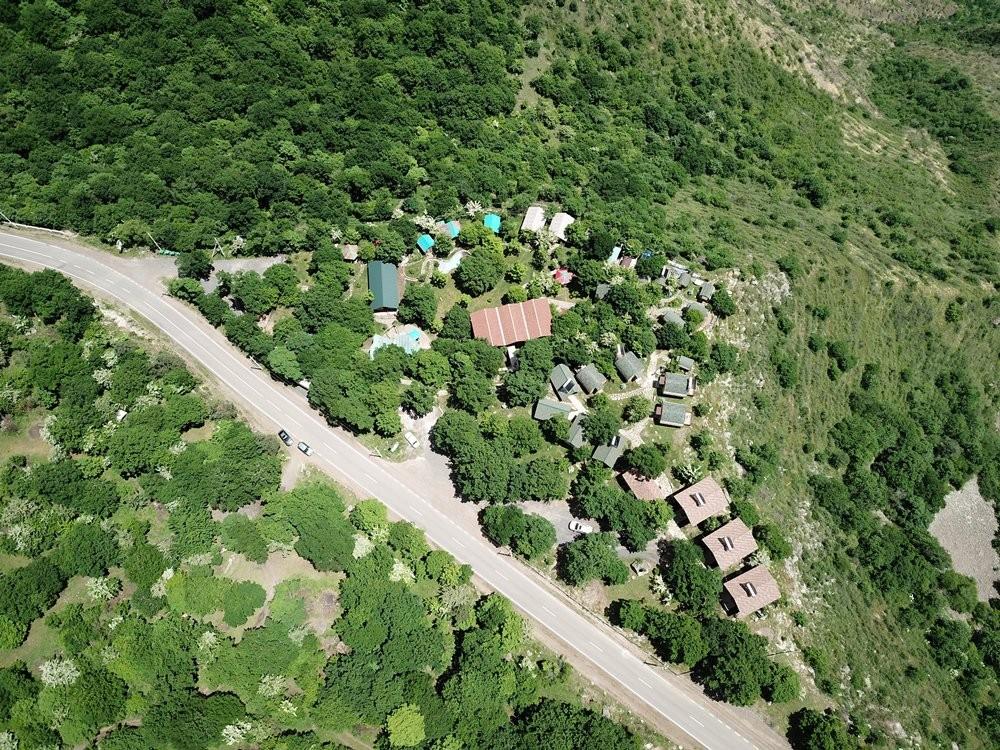 Article 20 of Armenia’s Forest Code states: "Conducting, drilling and other works on construction and blasting operations, mining operations, extraction of minerals, cables, pipelines and other communications not related to forest management and forest management in the state forest lands shall be carried out on the basis of the consent of the authorized public administration body. The agreement is based on the positive opinion of the environmental expertise.”

The government's 2007 806N Decree defines the procedure for the use of state forests and forest lands, which stipulates that the construction of buildings and structures in forest areas is permitted only for forestry needs, the conditions and procedures of which are defined by the Armenian government.

Article 14, paragraph 8, of Armenia’s Law on Environmental Impact Assessment and Expertise states that all the activities envisaged in Part 3 of this Article shall be subject to expert examination, which shall be carried out within specially protected and forested areas, within the limits of historical and cultural monuments , common green areas.