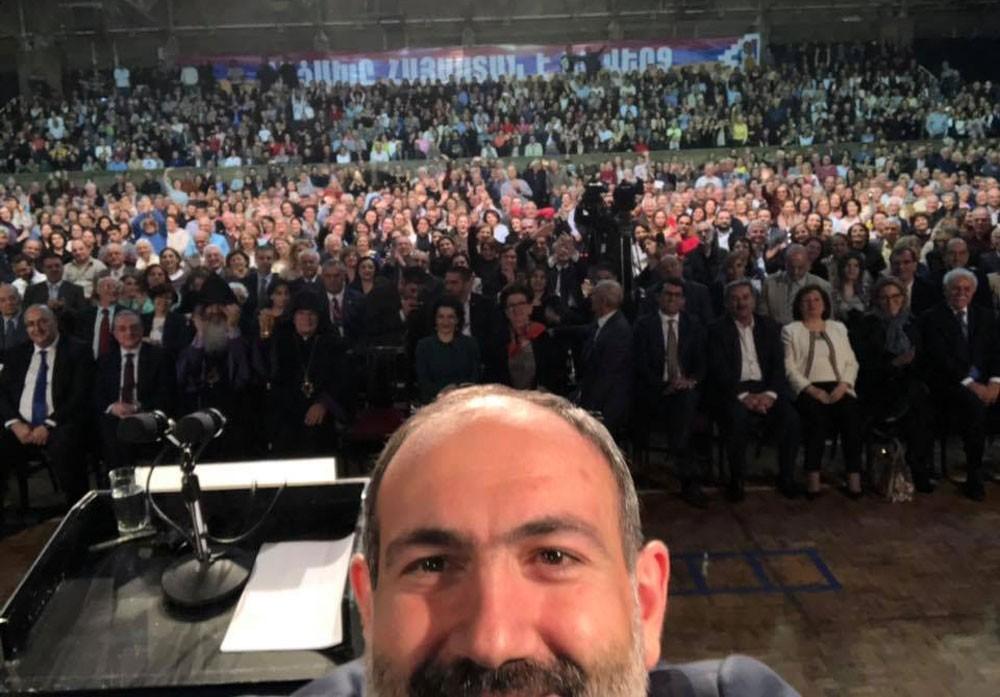 Armenian Prime Minister Nikol Pashinyan’s selfie, taken at a February 27, 2019 mass meeting in Tehran with members of the Iranian-Armenian community, has caused a number of legal problems regarding the degree of Iranian government supervision of that community’s internal affairs.

It turns out that the selfie, portraying an ebullient Pashinyan and an enthusiastic crowd of Iranian-Armenians in the Ararat Sports and Cultural Union auditorium, also included a banner, in the background, reading “Artsakh is Armenia, The End”.

This was sufficient for Iranian-Azerbaijanis to circulate the selfie on social networks, fostering heated debate and anti-Armenian sentiment in some circles in Iran.

As a result, the activities of the Iranian-Armenian community have come under the strict monitoring of Iranian special services.

As of now, Iranian-Armenians need to present community activities and programs, in detail to the Iranian government, special services, and implement them only after official approval. In the past, the Armenian community organized  events without providing a detailed report.

The Artsakh issue is a delicate internal political matter for the Iranian government, especially given the Azeri-majority populations in the regions (generally known as Iranian Azerbaijan; this region is historically referred to as Atrpatakan by Armenians) bordering Armenia and Artsakh in the northwest of the country. Iran has always taken a neutral stance on the Artsakh issue, restricting its official position to a call for a peaceful settlement of the conflict.

One example of the stricter monitoring of Iranian-Armenian communal affairs was the presence of Iranian special services at last month’s pilgrimage and religious services at Armenian St. Stepanos Monastery in the Iranian province of East Azerbaijan. Guests attending the July 24 church service were stopped and questioned by Iranian security personnel.

Hetq spoke with the Primate of the Armenian Diocese of Atrpatakan, Bishop Grigor Zitjian, about the Iranian-Armenian community, the tension created after the Pashinyan’s visit, and the Armenian cultural and historical legacy in the country. 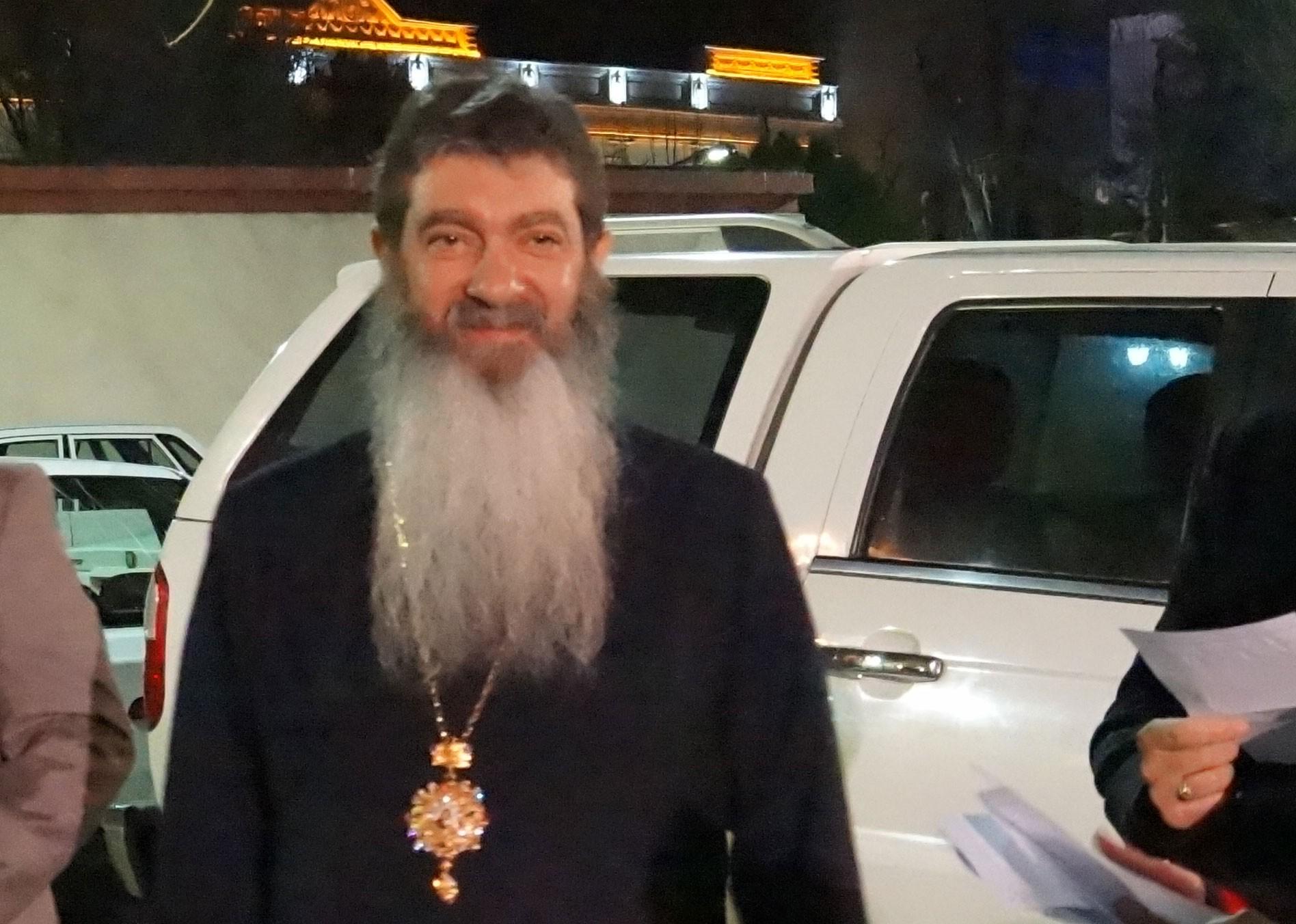 Minorities wherever there are, in communities and countries, should always be kept in the loop in a positive sense. That is to say, under attention. It’s clear, no, that science says the big will swallow the small. It's the law of the sea.

In Islamic countries, they are the majority. Minorities living here - Christian, Sunni, Jewish -are communities. If these communities aren’t always paid attention to,  there is always a safety zone around them so that we can live in peace and quiet. In fact, there is truth in what they say. There are other Islamic countries that do not allow a cross to be erected on the dome of the church. Go to Dubai, Sharjah, we have a new church there, but you can't put a cross on the dome.

Armenians aren’t newcomers to Iran. Armenians are indigenous, especially in Atrpatakan, which has been a part of Armenia for some time.

Why did the Apostle Tadevos come here if there were no Armenians? He came here to spread Christianity to Armenians. Atrpatakan has always had an Armenian population. They emigrated, went to Russia, other countries, but there were always Armenians. This makes the country, the state, respect the existence of these people. In essence, it is not just physical existence, but their life and their religious freedom. The most critical moment was during the establishment of the Islamic Republic of Iran, when the Armenian schools were closed and then they saw that no, the Armenian element is an important element here, it is a constructive element, it is not a dangerous element, it is an honorable element for the country, it is a hardworking people.

You can still go anywhere and talk about the Armenians. People say they are good craftsmen, they are truthful, they say something, they will apply it at the right time, they keep their promises.

This is how Armenians are recognized here. So why lose this element? Why shut down churches, impose what they want, or implement the Islamic Sharia here with the Armenians, who are the largest Christian minority in Iran? They saw that Armenians posed them no harm and said, let them live their lives. They will not multiply enough to absorb others. We do not pose a threat to Iran, on the contrary, we are a positive presence. But, as I said, all minorities should be in a network for their own security, as they explain.

Do you believe that explanation?

There have been incidents that have made us think that safety is important. For example, today the cities are not entirely made up of citizens. There are as many native Turks in Tabriz. They come here, they see a church, and ask what is this?

They also visit this monastery (St. Stepanos) from Nakhichevan, Baku and ask “What Armenians? What Christians?”

They are surprised that there is such a thing in the Islamic Republic. But they are peasants who do not know the Armenians, have no understanding of culture, do not know history. They come and visit. The people of the towns here are made up of those peasants, and that security is needed in such situations.

From conversations with Iranian-Armenians, it is clear that this monitoring has become more stringent of late.

April 24th is one of the most sensitive issues for us. In Tabriz we do it very secretly.

This year, we left the church, laid our flowers at the monument, and immediately every man turned his back on us as we were performing a ritual near the monument, doing the intercession of our saints there.

Now, we do everything in the church. There are people in the buildings (the buildings adjacent to the Tabriz church - the church and its courtyard) who watch our activities. It’s not that those people are dangerous or are snipers, but today's world war is going on in the media. They’ll photograph something and publish it online. Now the media is used as a tool to kill, to overthrow, to slander, or erase another from the world map. The media has all that power and potential today. If you want to pollute the mind of Tabriz residents, just post two photos. That's enough.

Was Prime Minister Pashinyan's visit the reason that this year’s April 24th commemorations were held behind closed doors?

In fact, it was clear that when Mr. Prime Minister arrived, the local Turks slightly rebelled against the notion that our people had posted "Artsakh is Armenia. The End" on the wall. When Mr. Pashinyan posted the selfie, with the people and that banner in the background, all of Tabriz and all the area’s Turks circulated it and cursed it, leading to greater monitoring of us.

The local Turks know us well. They know that we are not a dangerous element there. First, we are so few in number. But sometimes they do things against their state, against Islam, by utilizing  their base.

But the Iranian state knows very well that preserving the Armenians along the border, in all forms - shops, art, church, leadership, and everything - is an important point for maintaining good neighborly relations and showing the world.

But the protection of the state is important to us, because my predecessor, who filmed the demolition of the khachkars in Jugha and sent it to UNESCO, led to an attack on the Tabriz Prelacy. They wanted to kill him. The whole wall was destroyed. There are stalls along the wall. The Turkish shopkeepers now us and came to our defense, arm-in-arm. They said that they (the attackers) would have to pass over their dead bodies until the police arrived.

There are difficulties in every diocese, but the Turks of Atrpatakan know us very well, they know that we are indigenous, we are not newcomers. Our problem is those who come from Baku and Nakhichevan, who come here and to avail themselves of area’s medical and dentistry services, sometimes polluting the local environment. I can say that this environment is safe for us. There is no risk that it will escalate.

Are Armenians alone subjected to this stricter monitoring by the special services, or are Azeris also targeted?

They are also monitored, to restrain them.

How many Armenians live in Atrpatakan today?

Our number in Atrpatakan does not drop below 3,000, nor does it rise. In Urmia, Armenians have mixed with Assyrians. During the war, together they went to Iraq and they returned together. A relationship was created. Marriages took place. Even now, if you go to Urmia, you can't say who is Armenian or who is Assyrian. They are mixed, in every house. But we all regard them as children of our diocese. We consider any family in which  there is an Armenian, a part of our diocese.

What Armenian educational institutions are left in Atrpatakan?

We have two schools, two kindergartens. That is, one school and one kindergarten in Tabriz, as well as in Urmia. Marriages are few.

People think about the situation in the country. People think about emigrating and leaving, of getting married elsewhere, and having kids there. But there are very few people leaving Atrpatakan because we live in the most difficult of times.

When you live in the most difficult of regions, your skin hardens, and you become more resilient.

In our nation, in general, I do not deny that there is a wanderlust. No matter how much we say, Hayk the patriarch came, he did this, he did it, we have a church and so on, we have deep roots, it is very well manifested in collective life, we are nomadic in our individual lives.

Our world is our family only - good conditions for my family, good future for my children, good education for my young child, good university. Our world is our family. But when we come together, side by side, say good words, we will become the force against the world that will cut off the whole world. Individually we are nomads.

How many churches are preserved in Atrpatakan? In what condition are they?

We have more than 100 churches in Atrpatakan, in villages and so on. I have described 98 in my book, and I’m working on the second. I hope to finish the subject with three detailed volumes. Even if there is one Armenian letter, I take a photo and I put in the book.

We have 4 operating churches in Tabriz and one in Urmia.

Are they all under the protection of the state?

Not all. The churches listed on the UNESCO Heritage List are preserved by the country. But if we apply, let's say that some church in this village needs to be repaired or preserved, they must be repaired through them.

But making repairs in remote areas is somewhat senseless. Who will maintain them?

Right on the banks of the Araks, from where Araks and Tghmout meet, I walked for six hours until I found the first church.

We have 3 churches in the Tghmout Valley. One is St. Gevorg Cathedral. It is bigger than St. Thaddeus Monastery. It’s partially ruined. There is no road. Cars can’t go there. You have to walk.

I walked for six hours to reach St. Sargis Church, then on to St. Gevorg, then St. Gregory the Illuminator Church.

Many of them don’t have roads for cars or for walking. Why repair these churches? Thugs and treasure hunters always go to these places looking for buried gold. There is no point in repairing them all.

Iranian-Armenians also say that many Iranians apply to Armenian churches to convert to Christianity and get baptized. Does such a demand exist?

Nothing similar exists in our diocese. It’s all a ruse on their part. They do not renounce Islam. Rather,  they see how Armenians can easily get a visa, through baptismal certificates, as persecuted Christians, and so on.

They want that baptismal certificate to get to America.