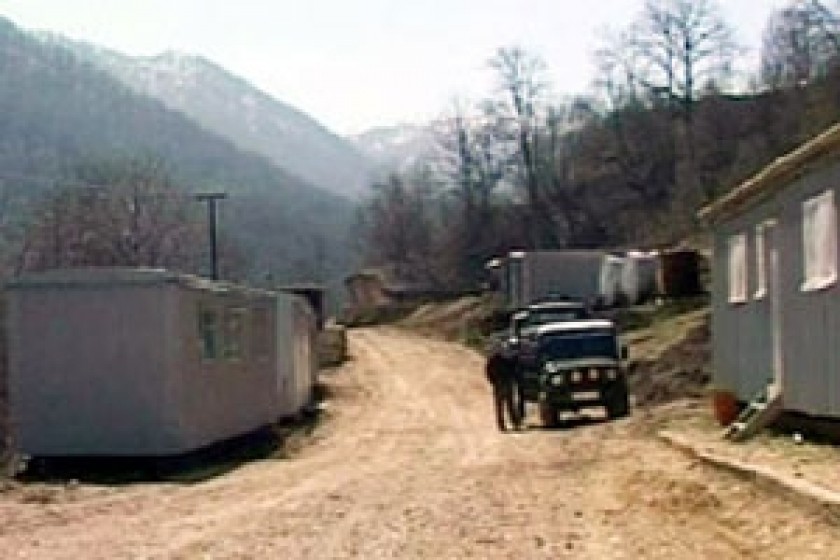 The Teghut Forest is Doomed, Thanks to the Minister of Nature Protection

On June 16, 2006 the management of the enterprise Armenian Copper announced that it had created a new company, Teghut, which would exploit the copper-molybdenum mine located in the Teghut forest in the Lori Marz. The new company already employs 130 people, mainly geologists and scientists. According to Armenian Copper director Gagik Arzumanyan, next fall additional personnel will be hired as construction work begins.

In this case "construction work" means logging, since even the company manager admits (and the mining plan specifies) that implementing the project will involve cutting down natural forest. Exploration work began a year ago, and many trees have already been cut down. Now, roads for trucks have been paved through the forest and digging equipment has been brought in.

The results of the exploration fulfilled the expectations of the owners of the mine; the amounts of copper and molybdenum corresponded to those reported in the Soviet era. Today, when the prices for these metals have sharply increased on the international market, and are continuing to go up, the wealth contained beneath the forest promises tremendous profits. Armenian Copper intends to surpass the amounts of copper and molybdenum produced elsewhere throughout the republic in its first five years of mining. In all probability, this explains the unconcealed enthusiasm toward the project on the part of state and local officials.

Lori Governor Henrik Kochinyan has openly declared, "I'm going to do all can to bring this project into being," adding, "Not only will new jobs be created, but a new settlement is being founded. 1,500 new jobs will be created in Teghut; we can confidently multiply this number by three or four. The population of the village will increase."

The 1,300 people living in Teghut today have responded to these promises enthusiastically. The village has little arable land, and many of its people are unemployed. "Let there be jobs, so people can work instead of starving to death. What does the forest give us?" they say.

Gagik Arzumanyan discusses the forest along the same lines. "The Lori Marz is saturated with forests. Their importance here is less than in other regions of Armenia." Meanwhile, even when metal prices on the international market are so high, the company rules out the possibility of closed mining, which is several times more expensive but could have saved the forest.

The Teghut Company is set, everything is ready for mining to begin, but an important factor, one required by law, is missing. The project has not been approved by the State Environmental Inspection yet.

The inspection agency gave a favorable assessment to the preliminary draft project, making several proposals to mitigate potential environmental damage which were to be considered during the drafting of the working plan.

This assessment does not, however, give permission to start mining. The law requires that the working plan be submitted for environmental inspection as well. The working plan must include detailed data regarding the possible damage to the environment, permission from the Ministry of Agriculture and its agency Armenian Forests for logging, and an agreement from the local community administration regarding exploitation of the land. If these documents are missing, explained Karine Movsisyan "the proposer has no right to implement the project unless there is a positive conclusion by the environmental inspection. But there has been no such conclusion since the project documents are not ready and have not been submitted yet."

The manager of Armenian Copper assures us that the company will submit the project to the ministry of environment this week. But they have already announced the commencement of the construction work, suggesting that they have little doubt that the Ministry of Nature Protection will give their approval.

The fact is, that back on 13, 2006 Minister of Nature Environment Vardan Ayvazyansaid in reference to the Teghut mine that government had made a strategic decision about the mining project. "We were asked whether it was worth mining or not, and we said, 'It is'. How much wealth is contained there and what the environmental impact will be, how the damage is going to be compensated for-all these things should be included in the project." Ayvazyan makes no secret of his support for mining in the forest, although he is duty-bound to protect this natural treasure.

Statements like these leave little doubt that the environmental inspection will be favorable. The verdict against the Teghut forest has already been rendered, thanks to yet another criminal conspiracy between big business and so-called natured protection.